In this article, we will look at the fault detection of parts and the preparation of the main parts for assembly.

Another difference is associated with the more intense thermal conditions of the 2112 engine compared to the 2110 and 2111 engines.

To cool the pistons while the engine is running, their bottoms are washed from below with oil through special nozzles pressed into the second, third, fourth and fifth main bearing supports.

The cylinders are bored directly into the block.

The maximum allowable cylinder wear is 0.15 mm per bore.

Thoroughly wash the cylinder block and clean the oil passages.

After blowing out and drying with compressed air, inspect the cylinder block.

Cracks in bearings or other places of the cylinder block are not allowed.

If there is a suspicion that coolant has entered the crankcase, then check the tightness of the cylinder block at a special stand.

To do this, after plugging the holes in the cooling jacket of the cylinder block, inject water at room temperature into it under a pressure of 0.3 MPa (3 kgf / cm 2).

There should be no water leakage from the cylinder block within two minutes.

If oil gets into the coolant, then without completely disassembling the engine, check for cracks in the cylinder block in the areas of the oil channels.

If air bubbles appear in the water filling the cooling jacket, replace the cylinder block.

Check the plane of the cylinder block connector with the head using a straight edge and a set of feelers.

The ruler is installed along the diagonals of the plane and in the middle in the longitudinal direction and across.

The flatness tolerance is 0.1 mm.

Check if the cylinder wear exceeds the maximum allowable - 0.15 mm. 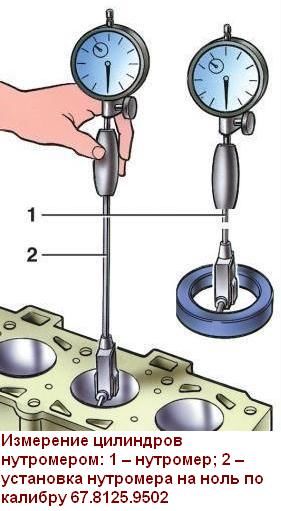 Measurement of cylinders with an internal gauge 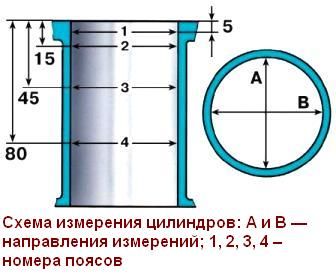 The cylinder diameter is measured with an internal gauge in four belts, both in the longitudinal and transverse directions of the engine.

In the zone of belt 1, the cylinders practically do not wear out. Therefore, by the difference in measurements in the first and other belts, one can judge the amount of cylinder wear.

If the maximum wear value is more than 0.15 mm, bore the cylinders to the nearest repair size, leaving an allowance of 0.03 mm for the honing diameter.

Then hon the cylinders, maintaining such a diameter that when installing the selected repair piston, the calculated clearance between it and the cylinder was 0.025–0.045 mm.

Cracks of any nature on the piston, piston rings, pin, on the connecting rod and its cover are not allowed.

If there are deep marks on the working surface of the liners, replace the liners with new ones. 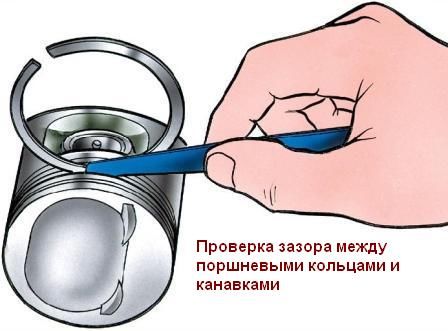 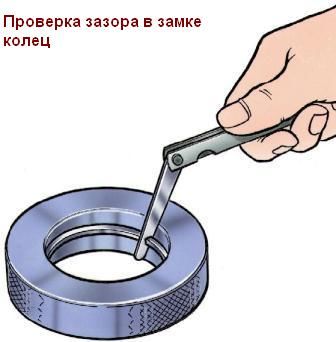 Checking the clearance between piston rings and grooves

Check the clearance between the piston rings and grooves with a set of feelers, as shown in the figure, by inserting the ring into the corresponding groove.

Check the clearance in the piston ring lock with a set of feeler gauges, inserting the rings into a gauge having a bore diameter equal to the nominal ring diameter with a tolerance of ± 0.003 mm.

To supply oil from the main journals to the connecting rods, channels are drilled in the crankshaft, the outlet openings of which are closed with pressed plugs.

On the toothed rim of the pulley, two out of 60 teeth are missing - the depressions are used for the operation of the crankshaft position sensor.

On the surfaces mating with the working edges of the oil seals, scratches, nicks and risks are not allowed.

Permissible runout of the main surfaces of the crankshaft

Install the crankshaft with the outer main journals on two prisms and check the runout with the indicator:

- main journals and seating surface for the drive gear of the oil pump (no more than 0.03 mm);

- seating surface for pulleys and surfaces mating with oil seals (no more than 0.05 mm).

Grind the necks with a reduction in diameter to the nearest repair size.

The ovality and taper of the main and connecting rod journals after grinding should be no more than 0.005 mm.

To check, install the shaft with the extreme main journals on the prisms and align the shaft so that the axis of the connecting rod journal of the first cylinder is in a horizontal plane passing through the axes of the main journals.

After grinding the necks, polish them with diamond paste or GOI paste.

After grinding and subsequent finishing of the journals, remove the plugs of the oil channels, and then machine the seats of the plugs with milling cutter A. 94016/10, put on the spindle A. 94016.

Thoroughly rinse the crankshaft and its channels to remove abrasive residues and blow with compressed air.

Press in new plugs with the A.86010 mandrel and mark each at three points with a center punch.

On the first cheek of the crankshaft, mark the amount of reduction of the main and connecting rod journals (for example, K 0.25; W 0.50).

Liners. No adjustments must be made on the liners.

Replace the liners with new ones if they are scored, scratched, or peeled off.

The gap between the liners and the crankshaft journals is checked by calculation (by measuring the parts).

It is convenient to use a calibrated plastic wire to check the gap. In this case, the verification method is as follows:

- Thoroughly clean the working surfaces of the liners and the corresponding neck and place a piece of plastic wire on its surface;

- install a connecting rod with a cap or a main bearing cap on the journal (depending on the type of journal being tested) and tighten the nuts or bolts. 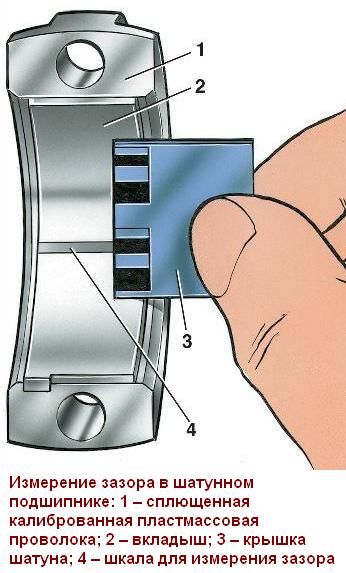 - remove the cover and use the scale on the package to determine the size of the gap by flattening the wire. 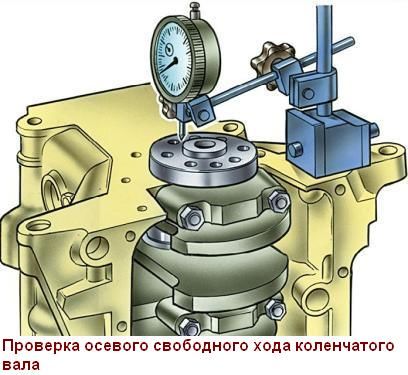 If the clearance is less than the limit (0.1 mm for the connecting rod and 0.15 mm for the main journals), then these bushings can be used again.

If the gap is greater than the limit, replace the liners on these journals with new ones.

If the crankshaft journals are worn out and are ground to a repair size, then replace the liners with repair ones (increased thickness).

Persistent half rings. As well as on the inserts, no adjustments can be made on the half rings.

Replace half rings with new ones if they are scuffed, scratched or peeled off.

The half rings are also replaced if the axial clearance of the crankshaft exceeds the maximum permissible - 0.35 mm.

Select new half rings with a nominal thickness or increased by 0.127 mm to obtain an axial clearance in the range of 0.06–0.26 mm.

Check the free axial movement of the crankshaft.

To do this, turn the cylinder block with the back side up and install a stand with an indicator on it so that the indicator leg rests against the crankshaft flange.

Moving the shaft up and down (for example, with screwdrivers), measure the free axial movement of the shaft with an indicator

Check the condition of the toothed rim and replace the flywheel if the teeth are damaged.

On the surface 1 of the flywheel, adjacent to the crankshaft flange, and on surface 3 under the clutch disc, scratches and scoring are not allowed.

The non-flatness tolerance of surface 3 is 0.06 mm.

Remove scratches and scratches on surface 3 with a groove, removing a metal layer no more than 1 mm thick. At the same time, grind surface 2 as well, without touching the toothed rim and maintaining the dimension (0.5 ± 0.1) mm.

When grooving, it is necessary to ensure the parallelism of surfaces 2 and 3 relative to surface 1.

Non-parallelism tolerance 0.1 mm. Place the handwheel on the mandrel, centering it on the bore with an emphasis on surface 1, and check the runout of planes 2 and 3.

In the places indicated by the arrows in the figure, the indicator should not show beats exceeding 0.1 mm.

Fault detection and inspection of other details are discussed in the corresponding articles.