The engine is carburetor, four—cylinder, inline, four-stroke, with two valves per cylinder. 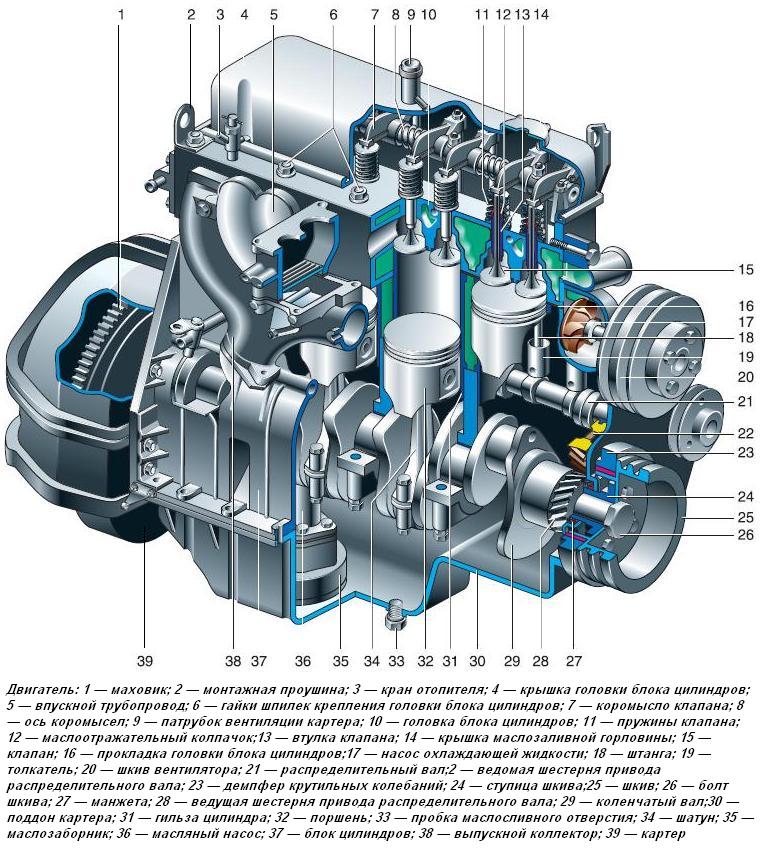 The cylinder block is cast from aluminum alloy. Cylinder liners cast iron, removable (wet type) or filled into the block on the engine UMZ-4218 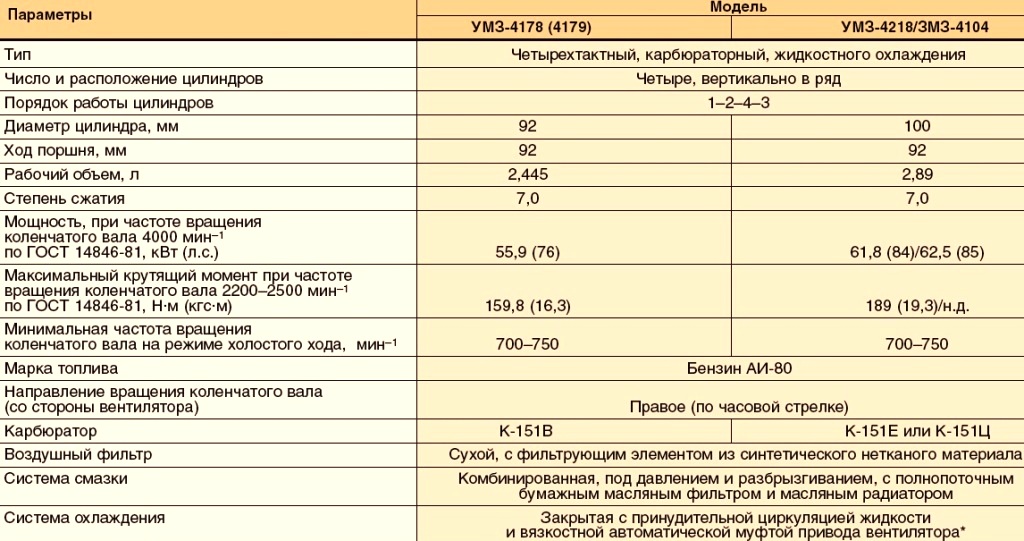 The sealing of the "wet" sleeves along the lower joint is provided by copper gaskets or rubber rings.

An aluminum clutch housing is bolted to the rear end of the block. The pistons are cast from aluminum alloy.

Two compression rings and one oil removal ring are installed on each of them.

The piston pins are of a floating type, they are held from axial movement by locking spring rings.

Connecting rods are steel, forged, I-section with a detachable lower head, the cover of which is fastened with two bolts with nuts.

A bronze bushing is pressed into the upper (piston head) of the connecting rod.

The crankshaft is cast iron, cast, full-bearing, with counterweights, dynamically balanced assembled with a flywheel and mounted in the cylinder block on five detachable main sliding bearings.

The main and connecting rod bearings are made in the form of inserts made of steel tape with an anti-friction aluminum-tin alloy applied to it.

The shaft is held from axial displacement by two thrust rings, which are mounted on both sides of the front main bearing.

A hub is pressed on the front toe of the crankshaft, to which a damper pulley is bolted.

The cylinder head is cast from aluminum alloy. Cast-iron seats and metal-ceramic valve bushings are pressed into it.

The head is attached to the block by ten studs with nuts through a metal-asbestos gasket.

On the right side, the exhaust manifold and intake pipe are attached to the head.

The camshaft is cast iron, installed in the bored holes of the lower part of the cylinder block.

On engines manufactured before 1996, the camshaft was mounted on antifriction bushings pressed into the cylinder block.

At its front end, a textolite or polyamide bevel gear drive is mounted on the key.

Camshaft cams, when it rotates, act on cylindrical pushers that are installed in the holes of the block.

Aluminum push rods with steel spherical tips actuate the rocker arms of the valves mounted on a common fixed steel axis. There is a screw with a lock nut on the short arm of the rocker arm to adjust the gap in the valve actuator.

Thin-walled bronze bushings are pressed into the holes of the rocker arms.

The valves are made of heat-resistant steel. Each valve is equipped with two springs with right and left winding and is installed in a metal-ceramic guide sleeve made of sintered copper-iron graphite powder with molybdenum disulfide.

The valve rods are sealed with rubber oil-reflecting caps, which prevent the penetration of oil into the combustion chambers. The top of the block head is closed with a stamped steel lid.

The lubrication system is combined - under pressure and spraying.

The main and connecting rod bearings of the crankshaft, camshaft bearings, rocker arm bushings, upper tips of push rods are lubricated under pressure.

The gears of the camshaft drive and the drive of auxiliary units are lubricated with a jet of oil, and the remaining parts are sprayed.

The cylinder walls are additionally lubricated with a jet of oil, which is ejected from the hole in the lower connecting rod head. The gear oil pump is driven in conjunction with the ignition distributor sensor by a helical transmission from the camshaft.

The pump body is aluminum, and its working straight-tooth gears are made of cermet.

The oil is taken by a pump from a steel stamped sump pan through a mesh oil intake, then it passes the pump, a full-flow filter and is fed into the oil line.

The oil pressure in the system is limited by a pressure reducing valve. On ZMZ engines, the oil filter is collapsible, with a replaceable filter element.

A non-removable oil filter is used on UMZ engines. There are bypass and anti-drainage valves in the filter housing.

The radiator is connected parallel to the main oil flow and is installed in front of the radiator of the cooling system. When the faucet is open, part of the oil passes through the radiator, cools and drains into the pan.

The radiator faucet should be opened at an air temperature above 20 ° C and (regardless of temperature) when driving in severe road conditions.

The crankcase ventilation system is closed, forced with the discharge of crankcase gases into the intake system through an oil separator with a vacuum regulator.

The power unit (engine assembly with clutch, gearbox and transfer case) is attached to the car frame on four supports, two of which are placed on the sides of the cylinder block. The other two are supported by a plate mounted between the gearbox and the transfer case.

The engine does not start, but the crankshaft is turned by the starter

The strainers of the fuel intake, carburetor, fuel pump or fuel fine filter are clogged, the fuel filter sump is clogged

Rinse the filters in solvent, blow with compressed air

- The fuel line is clogged

Blow the fuel line with compressed air, after opening the fuel tank plugs

Check the fuel pump, repair it or replace it

Eliminate jamming, rinse and blow the valve with compressed air

Place the car in a warm room. Warm up the pipelines and remove water from the fuel system by purging with compressed air

- The fuel jets are clogged

Clean and blow the jets with compressed air

- The carburetor float chamber is overflowing:

- The tightness of the float is broken

- The carburetor float chamber unbalance valve does not work

Check the operation of the valve and eliminate the malfunction

- Ingress of coolant into the cylinders:

- the cylinder head gasket is damaged;

- crack or sink in the cylinder head;

Replace the cylinder head gasket, check the flatness of the block head

The engine is running erratically in idle mode

Adjust the low speed of the crankshaft

Replace the gasket. Check the condition of the ends of the pipes and in case of non-flatness exceeding 0.2 mm, replace the pipeline

The engine stalls when the throttle is abruptly opened

- The accelerator pump does not work (the diaphragm is damaged, the pump drive is faulty, the check valve is leaky)

Eliminate the malfunction of the accelerator pump or check valve, replace the pump

- The discharge valve of the accelerator pump sprayer turned out

- The accelerator pump sprayer is clogged

Clean and blow the sprayer with compressed air

The engine does not develop full power

- The engine is not warmed up

Warm up the engine

- The air filter is dirty

- Reduction of compression in cylinders:

- Looseness of the valves to the seats

To grind the valves to the seats, adjust the thermal gaps in the drive

Replace the valves and grind them to the seats

Replace the piston rings, pre-clean the grooves in the pistons

- Wear of cylinder liners and pistons to the limit values (the maximum gap between the piston and the sleeve is more than 0.30 mm)

Replace the sleeves (block) and pistons with rings

- The cylinder head gasket is damaged

Rinse and purge the carburetor metering systems with compressed air, adjust the fuel level in the float chamber

- The silencer or intake pipe is clogged with carbon

The engine is overheating

- Insufficient amount of coolant in the cooling system

Top up the liquid. Check for leaks in the cooling system

- The upper thermostat valve does not open

- Scale deposition on the internal surfaces of the cooling system

Remove the radiator from the car, rinse it from the inside and outside with a jet of pressurized water

- Large friction losses in the chassis of the car

Check the free rolling path of the car and, if necessary, adjust the brakes, convergence and wheel bearings

- Ignition is too late

- The fan coupling is faulty

Turn on the radiator

The engine warms up slowly to operating temperature

Clean, rinse in gasoline and blow the air jets with compressed air

Eliminate the malfunction of the unbalance valve

- The carburetor air flap jams in the covered position

- The air filter is dirty

Tighten the fuel line connections or replace the diaphragm

Check the free rolling path of the car and, if necessary, adjust the brakes, convergence and wheel bearings

- Sensor or pointer is faulty

- Low oil level in the crankcase, which affects the amount of pressure when the car is moving on the ascent or descent

Check the level and top up the oil if necessary

Disassemble and flush the oil pump

- Decrease in oil viscosity due to overheating

Do not allow the engine to overheat, turn on the oil cooler in time

- Removal of oil with crankcase gases:

- Increased breakthrough of gases into the crankcase due to wear, breakage or burning of piston rings, as well as wear of cylinder liners and pistons

To repair the cylinder-piston group

- Clogging of the filter element of the air filter

- The adjustment of thermal gaps is broken

- Formation of a bully on the surface of the piston skirt

Replace the piston and cylinder liner (or adjust the cylinder block)

- Excessive wear of the ends of the pushrods or camshafts

To repair the cylinder-piston group

The engine does not start or runs intermittently

- The ignition timing is incorrectly set

- Breakdown of the distributor sensor cover

- There is no spark discharge on the candles when starting the engine:

- Failure of the ignition coil or additional resistance

- There is no contact in the terminals of the distributor sensor

Replace the coil or additional resistance

- Breakage of the stator winding of the distributor sensor