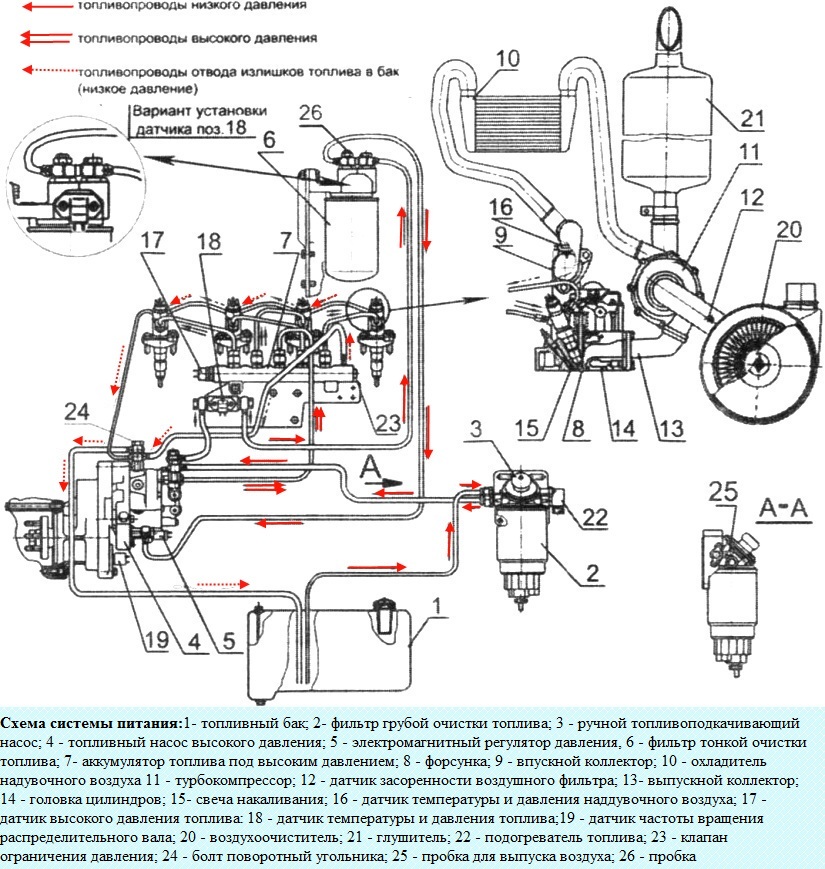 A diagram of the monitoring and control circuits of the COMMON RAIL power system is shown in Fig. one. 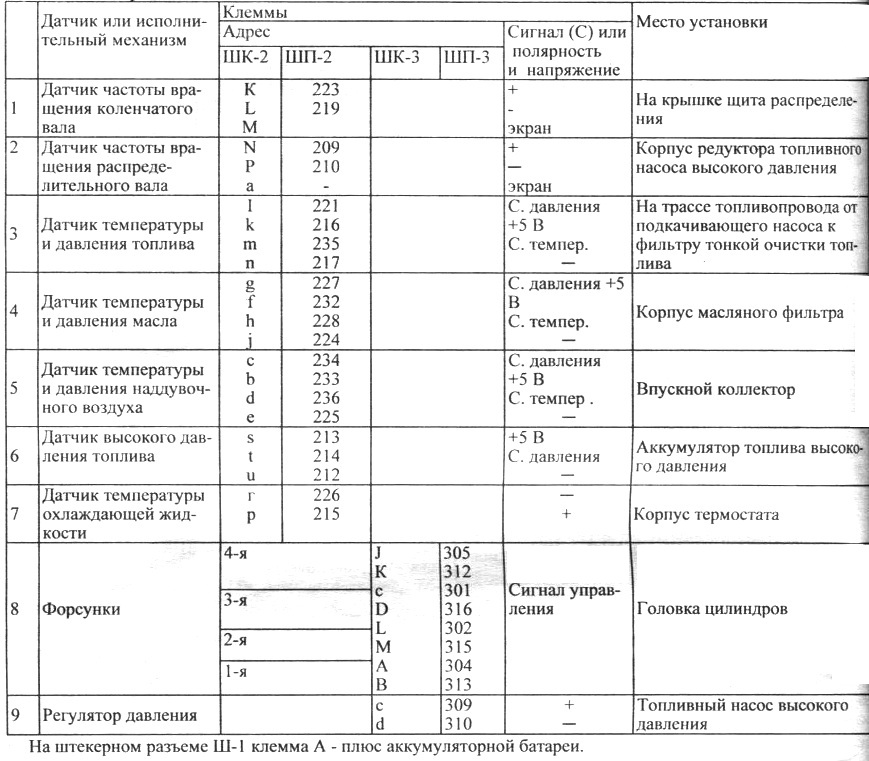 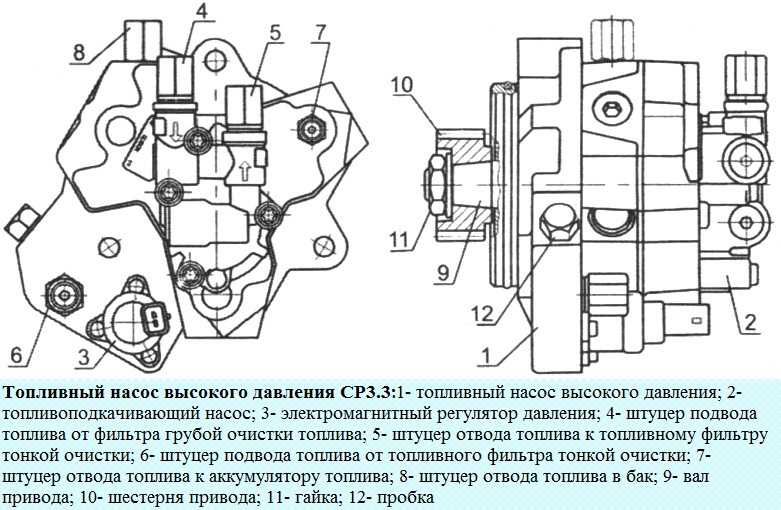 On the body of the high pressure fuel pump, a fuel pump 2, driven by shaft 9, and an electromagnetic pressure regulator 3 are fixed. 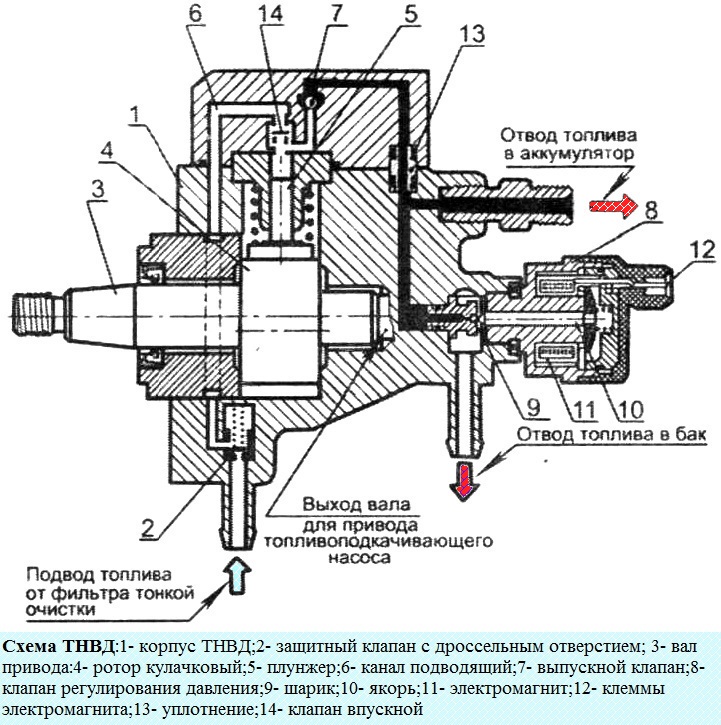 Three plungers 5 (Fig. 4.) are located radially in the injection pump housing with an angle interval of 120 ° (Fig. 4.), and a cam rotor 4 is installed on the drive shaft 3 (the cams are located 120 ° around the circumference of the rotor).

The drive shaft of the high-pressure fuel pump with a cam rotor has a gear drive from a gearbox, the input shaft of which, through the drive half-coupling, is in kinematic connection with the diesel crankshaft through the distribution gears.

Fuel that has passed the coarse fuel filter with a water separator is supplied under a pressure of 0.8 ... 0.9 MPa by a fuel pump through a fine fuel filter to the injection pump inlet.

Under the influence of the created pumping pressure, the safety valve 2 opens access to the fuel through the supply channel 6 into the supra-plunger spaces.

The oncoming cam of the rotor moves the plunger upwards, while the inlet of the inlet channel is closed, and as the plunger rises further, the fuel is compressed in the space above the plunger.

The plunger delivers fuel until it reaches TDC (feed stroke). Then the pressure drops and the outlet valve closes.

The plunger begins to move downward. For one revolution of the shaft, each (of three) plunger makes one pumping stroke.

Since the high pressure fuel pump is designed for a large flow rate, at idle and at partial loads, an excess of compressed fuel arises, which is returned to the fuel tank through the pressure control valve 8 and the return line.

The pressure regulating valve adjusts the pressure in the high pressure accumulator depending on the load on the engine, the speed and the thermal state of the engine.

is drained back through the return line to the fuel tank.

The pressure control valve is attached through the flange to the high pressure pump housing.

The armature 10 presses the valve ball 9 against the seat under the action of the valve spring so as to separate the high and low pressure circuits.

The included electromagnet 11 moves the armature, applying additional force to press the ball against the seat.

The entire anchor is washed with fuel, which lubricates the rubbing surfaces and removes excess heat. 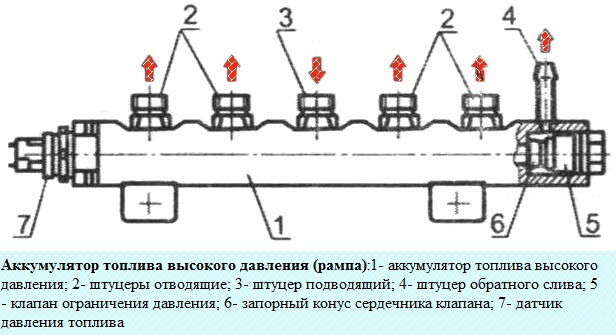 At the same time, the accumulator smooths out pressure fluctuations that arise due to the pulsating fuel supply from the injection pump, as well as due to the operation of the injectors during injection due to the out of synchronicity of the pressure pulses of the fuel doses coming from the injection pump and consumed through the nozzles, as well as due to excess weight fuel located in the accumulator and playing the role of a damper for impulses of small doses of fuel supplied and consumed.

The accumulator 1 generally has the shape of a pipe, at the ends of which a fuel pressure sensor 7 and a pressure limiting valve 5 are installed.

Along the generatrix of the perimeter of the pipe, there is a nozzle for connecting high-pressure fuel lines 2; 3 and backflow connection 4.

The fuel accumulator communicates with the injectors by means of high pressure fuel lines connected to the accumulator outlet nipples.

The accumulator volume is constantly filled with pressurized fuel. The value of this pressure is maintained at a constant level and can be regulated by valve 8 (Fig. 5) depending on the parameters of the diesel engine.

The pressure limiting valve maintains a certain amount of pressure in the accumulator, acting as a pressure reducing (safety) valve.

On the side of the accumulator, the valve body has a channel that is closed by a cone of the valve core 6.

The spring presses the plug firmly against the valve seat at normal operating pressure so that the accumulator remains closed. 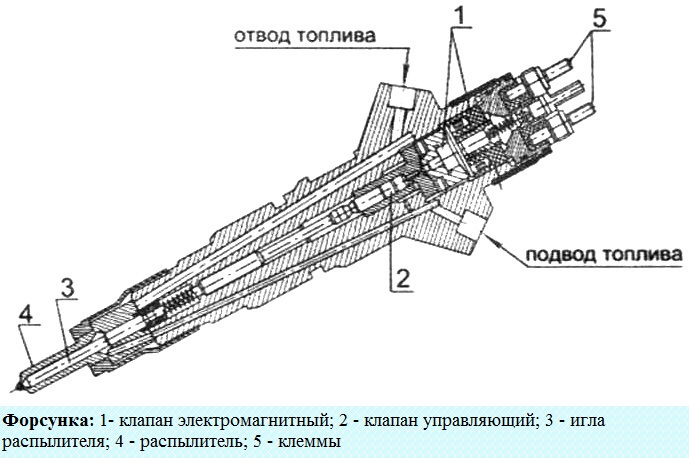 The nozzle (Fig. 6) is designed to inject fuel into the diesel cylinder and provide the required fuel atomization. The diesels are equipped with CRIN2 injectors manufactured by BOSH (Germany).

The required moment of the start of injection and the amount of fuel delivery are provided by the action of the injector solenoid valve.

The moment of the start of injection in the "angle-time" coordinates is set by the electronic control system for the operation of the diesel engine.

The formation of the injector control signals by the electronic unit is based on "reading" the signals generated by the crankshaft speed sensors and the input shaft of the injection pump drive gearbox (sensors 1 and 2 in Fig. 2.), installed in a coordinated relationship according to a certain scheme. 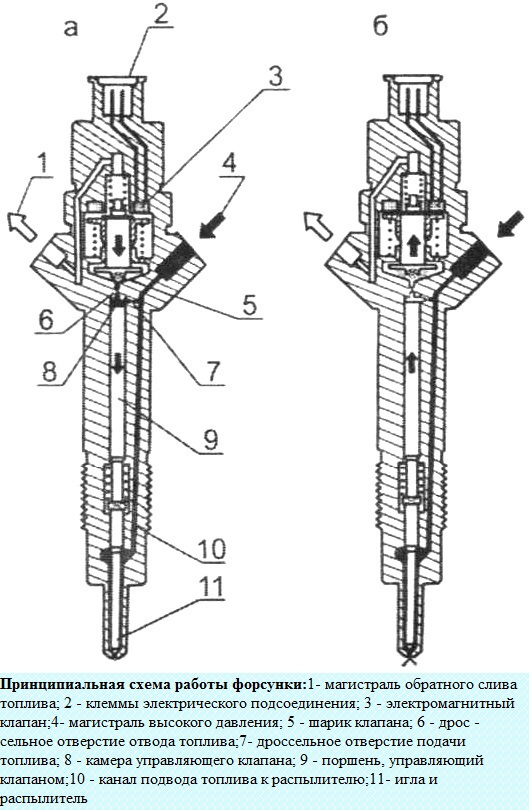 The principle of operation of the injector is shown in Figure 7.

When the throttle hole 6 is closed, the hydraulic force acting on the piston of the control valve from above exceeds the force of fuel pressure from below on the cone of the nozzle needle.

When the solenoid valve 3 is triggered, the armature of the electromagnet moves up, opening the throttle hole 6.

Under the influence of fuel pressure on the cone, the nozzle needle moves away from the seat, so that the fuel through the nozzle holes enters the combustion chamber of the cylinder.

The pilot feed is an additional amount of fuel intended for needle lift, which, after use, is diverted to the fuel return line.

In addition to the control feed, there are fuel leaks through the nozzle needle and the control valve piston guide.

All this fuel is diverted into the return line, to which all other units of the injection system are connected, and returned to the fuel tank.

The amount of injected fuel is proportional to the time when the solenoid valve is turned on and the pressure in the rail, and does not depend on the engine crankshaft speed or the operating mode of the high-pressure fuel pump (time-controlled injection).

When the solenoid valve is de-energized, the armature is pressed down by the force of the valve closing spring and the valve ball 5 closes the throttle hole.

After closing the throttle hole of the fuel outlet, the pressure in the control valve chamber again reaches the same value as in the accumulator.

This increased pressure pushes the control valve piston downward along with the spray needle. When the needle is firmly seated on the nozzle seat and closes the holes, injection stops.

The coarse fuel filter is used for preliminary cleaning of fuel from mechanical impurities and water. 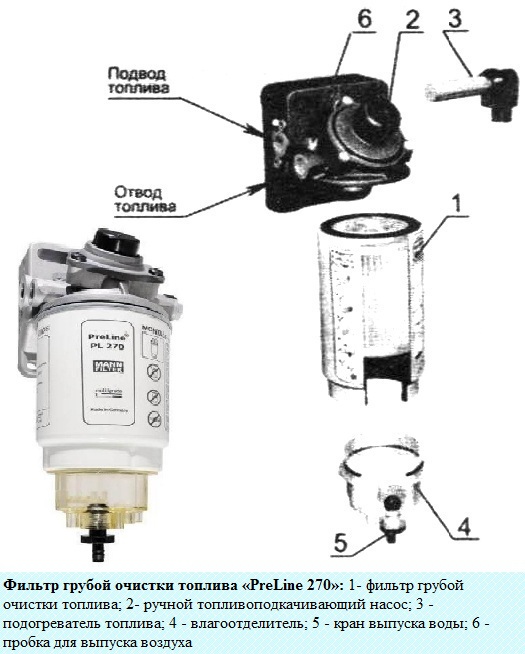 The sludge is drained from the filter through the tap 5, located at the bottom of the moisture separator 4.

When operating a diesel engine at ambient temperatures below -25 ° C, the filter housing must be equipped with a preheater 3 for the supplied fuel.

The heater works autonomously, turns on and off automatically at temperatures below + 5 ° С.

The fuel, passing through the curtains of the paper filter element, is cleaned of mechanical impurities. 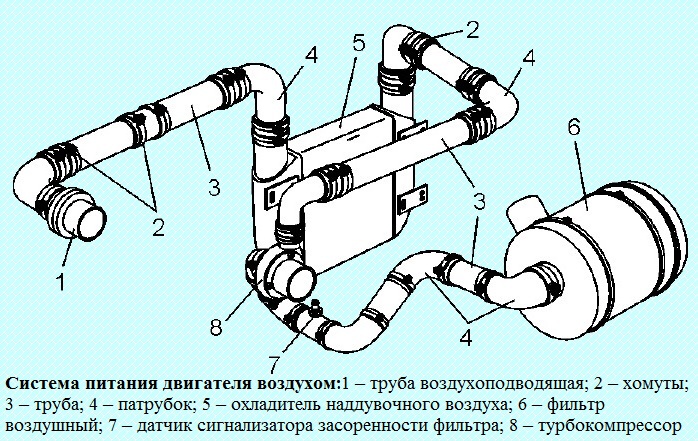 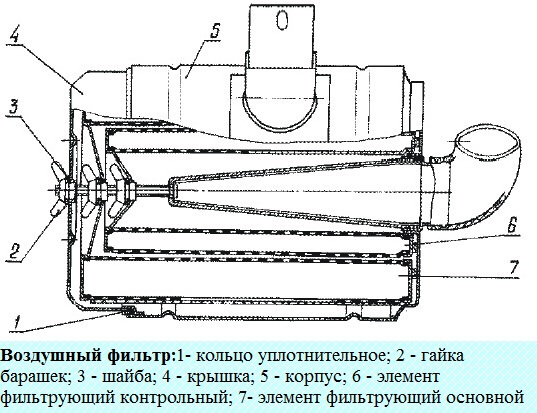 The air filter (Fig. 10) consists of a body 5, two filtering elements 6 and 7, a cover 4 to ensure tightness, there are rubber gaskets.

Attention! Leakage of untreated air into the engine cylinders, which occurs due to depressurization of the intake tract, leads to a sharp decrease in the service life of the engine.

To facilitate the control of the clogging of the air filter, a sensor is installed between the filter and the turbocharger, and on the instrument panel there is an indicator.

As the filter becomes clogged, the vacuum in the inlet pipeline grows and when the value of 6.5 kPa is reached, the alarm is triggered, and the indicator lamp "Air filter clogged" on the instrument panel lights up.

When the lamp comes on, clean or replace the filter element.

The turbocharger (Fig. 11) consists of a single-stage centrifugal compressor and a radial centripetal turbine.

The boost regulation is carried out by passing a part of the exhaust gases past the turbine wheel when the boost pressure exceeds a certain value. 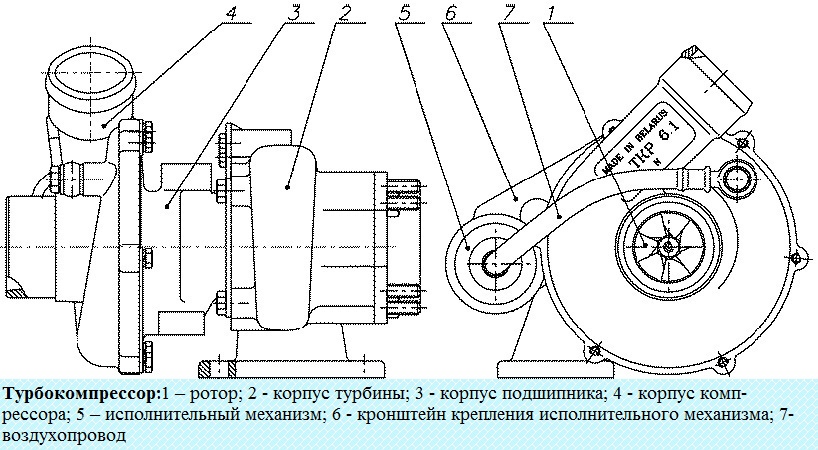 A wastegate valve is integrated into the turbine housing of the variable turbocharger. The bypass valve lever is connected by an adjustable thrust to an actuator connected by an air duct to the outlet pipe of the compressor housing.

Changing the length of the thrust of the turbocharger actuator during operation is not allowed.

Disassembly and repair of the turbocharger during operation is not allowed and must be carried out in a specialized repair shop.