The fuel tank, the coarse fuel filter and the fuel pump must be installed on the product on which the engine is used, all other elements of the power system are installed directly on the engine. 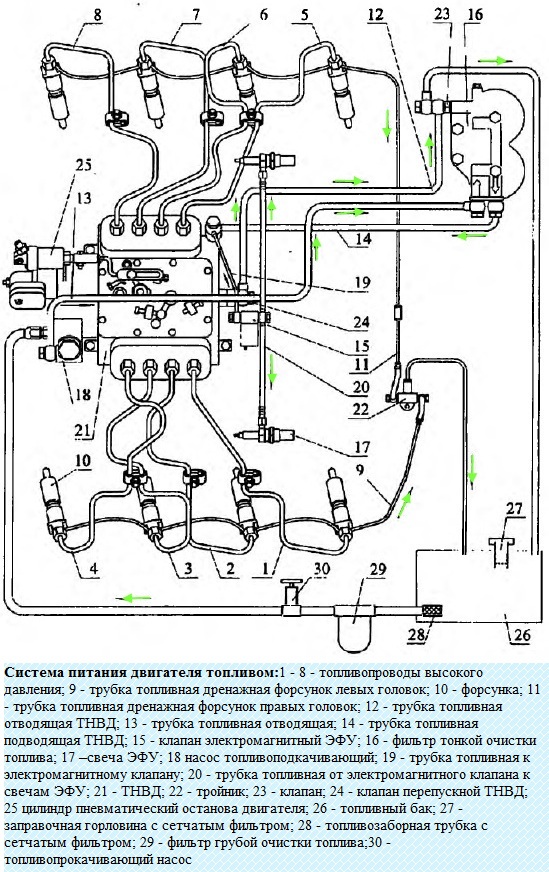 The diagram of the engine fuel supply system is shown in Figure 1.

From a fine filter, through a low-pressure fuel tube 14, fuel enters the fuel injection pump 21, which, in accordance with the order of operation of the cylinders, distributes fuel through high-pressure fuel lines 1-8 to the injectors 10.

Excess fuel, and with it the air entering the system through the bypass valve 24 and the valve 23 is discharged into the fuel tank.

The nozzle of the model 273-20 or 273-50 of a closed design, with five spraying holes and hydraulic control of the lifting of the spray needle is shown in Figure 2.

The necessary tension of this spring is carried out by a set of adjusting washers 9, 10, installed between the spring and the end of the inner cavity of the nozzle body.

Fuel is supplied to the nozzle under high pressure through a nozzle 8 with a slot filter 13 built into it, then through the channels of the housing 6, spacer 3 and the atomizer housing 1 - into the cavity between the atomizer housing and the needle 12 and, lifting it, is injected into the engine cylinder.

The fuel that has leaked through the gap between the needle and the atomizer body is diverted through channels in the nozzle body and drained into the tank through drainage tubes 9 and 11, shown in Figure 1.

The nozzle is installed in the cylinder head, fixed with brackets, which are fixed with a nut. The end of the sprayer nut is sealed against gas breakthrough with a corrugated copper gasket.

and liquids into the cavity between the nozzle and the cylinder head.

It is strictly forbidden to install injectors of other models 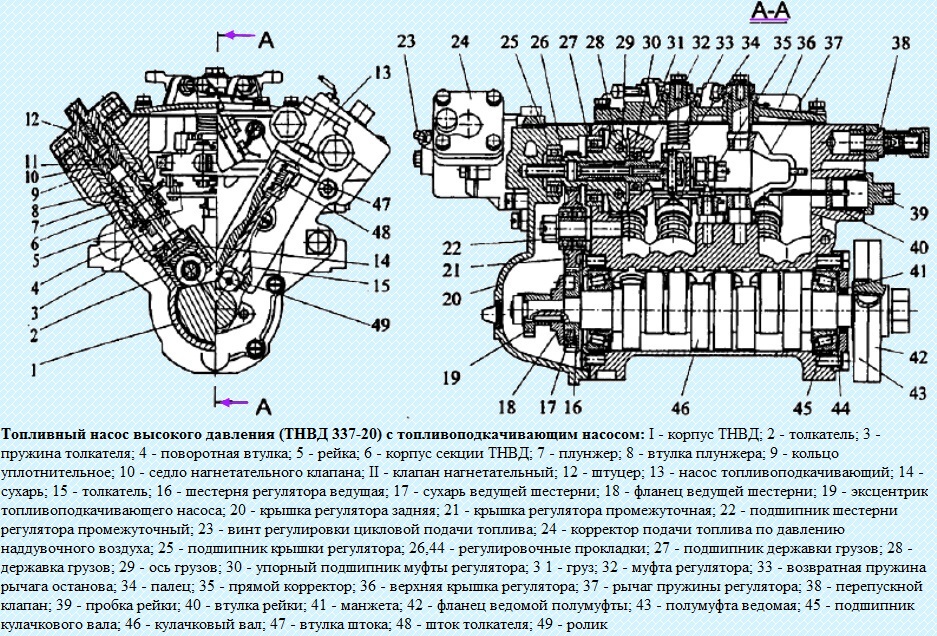 A fuel injection pump with an all-mode regulator is installed on the engine of the automotive configuration.

Characteristics of the fuel pump

Nominal speed of rotation of the cam shaft, min-1 1100

The speed of rotation of the cam shaft of the pump when the control lever of the regulator stops in the bolt of the maximum speed limit, min-1:

- when the fuel supply regulator is completely turned off after 1280

Preliminary stroke of the plunger (from the beginning of its movement to the geometric beginning of injection in the eighth section), mm: 5.65± 0.05

The maximum force on the control lever of the regulator at the nominal operating mode of the pump on the shoulder is 50 mm, N (kgf) 127.5 (13)

Eight sections are installed in the fuel pump housing 1 (Figure 3), each of which consists of a housing 6, a plunger sleeve 8, a plunger 7, a rotary sleeve 4, a discharge valve 11, the seat of which is pressed against the plunger sleeve 8 by a fitting 12.

The plunger performs a reciprocating motion under the action of the cam shaft 46 and the spring 3 of the pusher.

The pusher from turning in the housing is fixed with a cracker 14. The cam shaft rotates in roller bearings 45 mounted in steel rings pressed into the pump housing and pressed with covers.

To change the fuel supply, the plunger 7 is rotated using a sleeve 4 connected through the leash axis to the pump rail 5. The rail moves in the guide bushings 40.

The holes for the guide bushings in the fuel pump housing on the drive side are closed with plugs 39. On the opposite side of the pump there is a fuel supply corrector according to the charge air pressure 24.

At the front end of the housing, at the place where the fuel exits the pump, a bypass valve 38 is installed, which provides pressure in front of the intake ports of the plungers at operating modes 0.13-0.19 MPa (1.3-1.9 kgf / cm2).

The lubrication of the pump is circulating, under pressure from the general lubrication system. 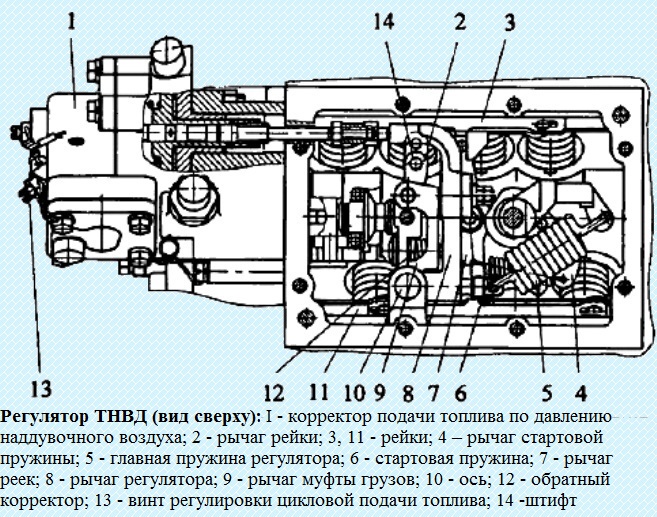 The fuel pump speed controller (Figure 4) is all-speed, direct acting, changes the amount of fuel supplied to the cylinders depending on the load, maintaining the set speed of the crankshaft.

The regulator is installed in the collapse of the fuel pump housing. On the cam shaft of the pump there is a driving regulator gear 16 (Figure 39), the rotation of which is transmitted through rubber crackers 17.

The driven gear is made at the same time with a holder of 28 loads rotating on two ball bearings.

When the holder rotates, the loads 31 swinging on the axes 29 diverge under the action of centrifugal forces and move the regulator coupling 32 through the thrust bearing 30, which, resting against the finger 34, in turn moves the levers 2, 8 and 9 of the regulator (Figure 4), overcoming the spring force 5. 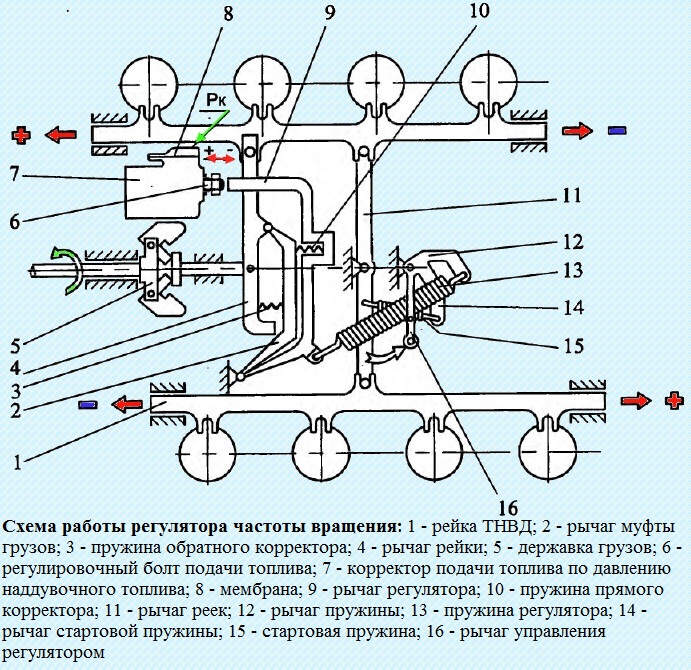 The operation scheme of the speed controller is shown in Figure 5.

During the operation of the regulator, the centrifugal forces of the loads are balanced by the force of the spring 13.

With an increase in the speed of rotation of the crankshaft, the loads, overcoming the resistance of the spring 13, move the levers 2,4 and 9, and with them the fuel pump rails - the fuel supply decreases.

When the regulator lever 9 stops in the bolt 6 and the crankshaft rotation speed is less than 1800 min-1, the spring 10 of the direct corrector moves the pump rails (through levers 2 and 4) in the direction of increasing the fuel supply, providing the required amount of maximum engine torque.

The spring 3 of the reverse corrector at a speed of less than 1400 min‑1 moves the lever 4 with rails in the direction of reducing the fuel supply, limiting the maximum smokiness of the exhaust gases of the engine. 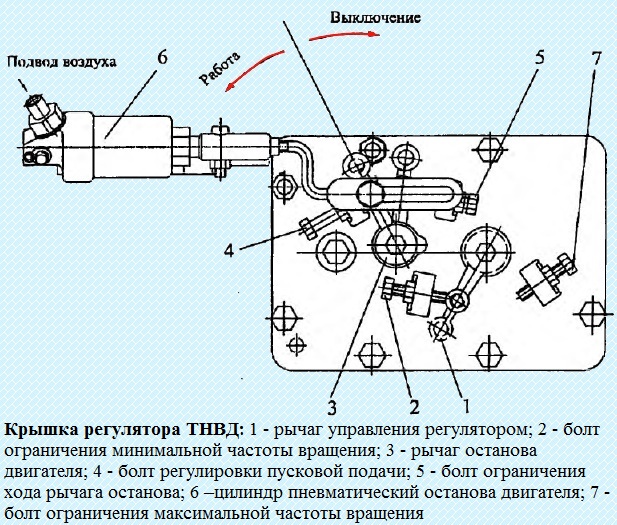 The fuel supply is stopped by turning the lever 3 (Figure 6) to stop the engine all the way into the bolt 5.

In this case, the lever 3, overcoming the force of the spring of the lever 33 (Figure 3) and the spring 5 (Figure 4), will turn the levers 2, 8 and 9 through the pin 14, the rails will move until the fuel supply is completely stopped.

It is STRICTLY FORBIDDEN to install on the engines 740.50-360 and 740.51-320 fuel injection pumps of other models other than the above, in order to avoid engine failure! 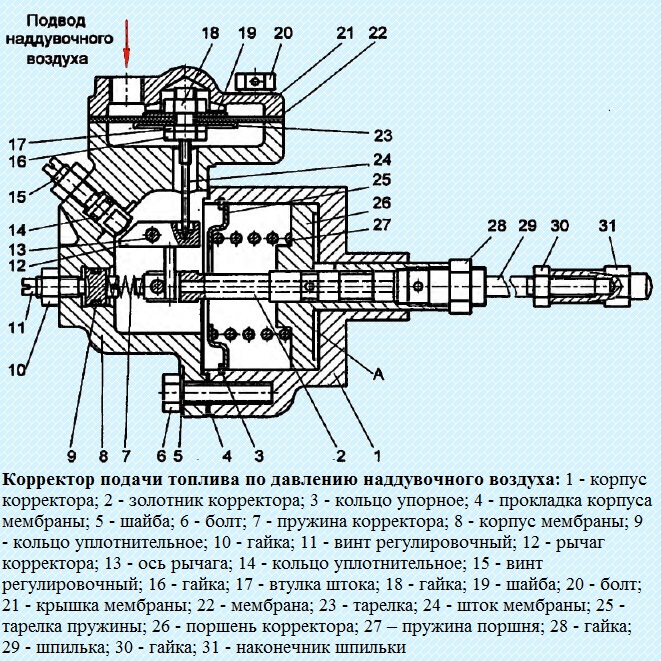 A stud 29 with a tip 31, which is a nominal stop in the regulator, is wrapped and secured in the piston with a nut 28.

The tip is secured with a nut 30. A spring 7 acts on the spool 2, the pre-tension of which can be changed by the adjusting screw 11.

In the membrane housing 8, a corrector lever 12 is installed on the axis of the lever 13, the rotation of which is limited by the adjusting screw 15.

The piston under the influence of this pressure, compressing the spring 27, moves to the left until the windows in the piston and spool open and the oil goes to drain. At the same time, a constant oil consumption is established through the corrector.

When the position of the spool changes, the piston moves after it (the tracking system).

Air from the intake manifold of the engine is supplied to the membrane cavity through the threaded hole of the cover 21.

When the air pressure drops below 0.05 MPa (0.5 kgf/cm2), the force of the corrector spring 7 acting on the spool becomes greater than the force created by the pressure of the charge air on the membrane and transmitted through the diaphragm rod and the corrector lever also to the spool.

The spool moves to the right until there is a balance of forces acting on it.

Following the spool, the piston with the stud 29 and the tip 31 moves to the right, moving the regulator lever 8 resting on it to the right (Figure 4).

Following the regulator lever, under the action of the centrifugal forces of the loads, the levers 9.2 and 7 with the pump rails move in the direction of reducing the fuel supply.

The corrector has two external adjustments - screws 11 and 15 (Figure 7).

If it is necessary to increase the value of the charge air pressure at which the corrector starts to work, then the screw 11 is turned, increasing the pre-tension of the spring 7.

If there is a need to remove the corrector, then it is first necessary to measure the protrusion of the tip of the stud 31 relative to the rear end of the fuel pump housing, and after installing the corrector in place, restore the size of this protrusion and wipe the tip with a nut 30.

Each package of compensating plates consists of 5 plates with a thickness of 0.5 mm each.

The tightening of all bolts must be controlled with a torque wrench. Before installing the bolts, check for centering bushings.

Deformation (bending) of the front and rear compensating plates is not allowed. The bolt 10 of the half coupling of the leading one should be tightened last of all with a torque of 78.4-84.3 Nm (8-8.6 kgf m). 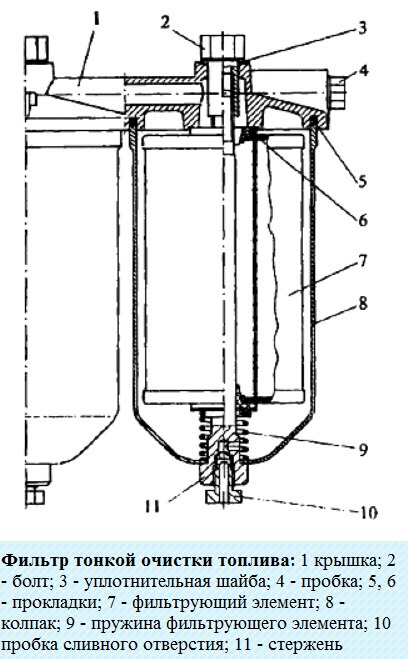 The fuel fine filter is shown in Figure 9. It is designed for the final purification of fuel from fine particles before entering the fuel injection pump. 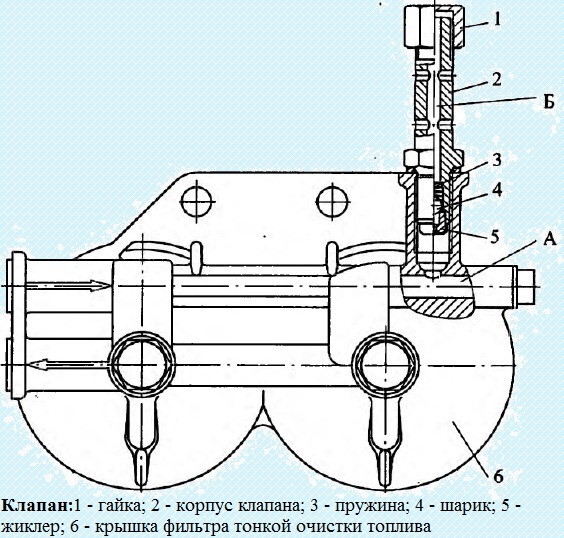 The fuel pump 13 (Figure 3) of the piston type is designed to supply fuel from the tank through coarse and fine filters and a fuel pump to the intake cavity of the injection pump.

The pump is mounted on the back cover of the regulator, its drive is carried out from the eccentric 19, located at the rear end of the cam shaft of the injection pump.

The pump housing contains a piston, a piston spring, a rod sleeve 47 and a pusher rod 48, inlet and discharge valves with springs.

The eccentric 19 through the roller 49, the pusher 15 and the rod 48 communicates reciprocating motion to the piston of the fuel pump.

The pump operation scheme is shown in Figure 11. When the pusher 9 is lowered, the piston 1 moves downwards under the action of the spring 4. A vacuum is created in the cavity "A" and the intake valve 2, compressing the spring 3, passes fuel into the cavity "A".

At the same time, the fuel located in the discharge cavity "B" is forced into the main line "G", while the valve 5 is closed under the action of the spring 6, excluding the flow of fuel from the cavity "B" into the cavity "A".

When the piston 1 moves upwards, the fuel filling the cavity "A" enters the cavity "B" under the piston through the discharge valve 5, while the intake valve closes.

When the pressure in the discharge line increases, the piston does not make a full stroke after the pusher, but remains in a position that is determined by the equilibrium of the fuel pressure force on the one hand and the spring force on the other. 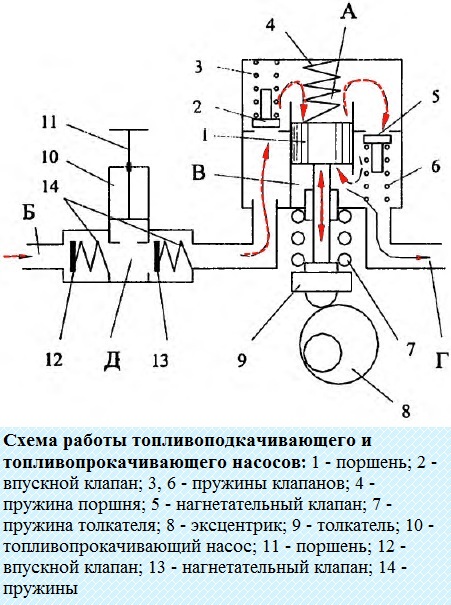 The piston-type fuel pump 10 (Figure 11) is used to fill the fuel system with fuel before starting the engine and removing air from it.

The pump consists of a housing, piston, cylinder, inlet and discharge valves.

The fuel system should be pumped using the pump piston, having previously opened it by turning counterclockwise.

When the piston 11 moves upwards, a vacuum is created in the space under it. The intake valve 12, squeezing the spring 14, opens and the fuel enters the cavity "D" of the pump.

When the piston moves down, the intake valve closes and the discharge valve 13 opens, the fuel enters the discharge line under pressure, ensuring the removal of air from the engine fuel system through the fuel fine filter valve and the bypass valve of the fuel injection pump.

After pumping the system, it is necessary to lower the piston and fix it by turning clockwise. In this case, the piston will press against the end of the cylinder through a rubber gasket, sealing the suction cavity of the fuel pump.

It is not allowed to start the engine with an unfixed piston due to the possibility of air suction through the piston seal.

The low-pressure fuel lines are made of steel pipe with a cross section of 10 mm with soldered tips.

High-pressure fuel lines of equal length (1 = 595 mm) are made of steel tubes with an internal diameter of 2 +0.05 mm by landing at the ends of connecting cones with crimp washers and cap nuts for connection with fuel injection pump fittings and injectors.

In order to avoid damage from vibration, the fuel lines are fixed with brackets to the intake manifolds.