The engines installed on Renault Duster cars are equipped with an electronic engine management system with multipoint fuel injection.

This system ensures that the latest emission and vapor regulations are met while maintaining high performance and low fuel consumption.

The control device in the system is an electronic control unit (ECU).

In addition, in accordance with the embedded algorithm, the ECU controls the operation of the electric motor of the engine cooling fan and the electromagnetic clutch for turning on the air conditioner compressor, performs the function of self-diagnosis of the system elements and notifies the driver about any malfunctions.

In the event of failure of individual sensors and actuators, the ECU switches on emergency modes that ensure the engine's performance.

The amount of fuel supplied by the injectors is determined by the duration of the electrical signal from the ECU.

The electronic unit monitors the data on the state of the engine, calculates the need for fuel and determines the required duration of fuel delivery by the injectors (signal duration).

To increase the amount of fuel supplied, the signal duration is increased, and to decrease the fuel supply, it decreases.

The engine management system, along with the electronic control unit, includes sensors, actuators, connectors and fuses. 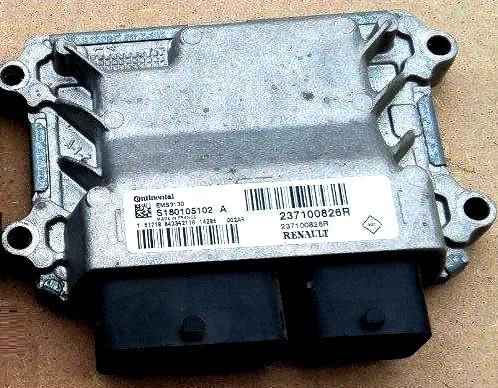 The electronic control unit (ECU, controller) is connected with electrical wires to all sensors in the system.

Receiving information from them, the unit performs calculations in accordance with the parameters and control algorithm stored in the memory of the programmable read-only memory (EPROM), and controls the executive devices of the system.

The version of the program recorded in the EPROM memory is indicated by the number assigned to this ECU modification.

The control unit detects a malfunction, identifies and memorizes its code, even if the failure is unstable and disappears (for example, due to poor contact).

The malfunction indicator of the engine management system in the instrument cluster goes out 10 s after the failure of the unit has been restored.

After repair, the fault code stored in the memory of the control unit must be erased.

To do this, turn off the power to the unit for 10 s (remove the fuse for the power supply circuit of the electronic control unit or disconnect the wire from the minus terminal of the storage battery).

The unit supplies various sensors and switches of the control system with direct current voltage of 5 and 12 V.

Since the electrical resistance of the power circuits is high, the test lamp connected to the system terminals does not light up.

To determine the supply voltage at the terminals of the computer, a voltmeter should be used, the internal resistance of which is at least 10 megohms.

The electronic control unit controls the immobilizer system. The ECU is not suitable for repair, therefore, in case of failure, it must be replaced.

The number and brand of electronic components of the engine management system depends on the vehicle configuration, which power plant is on the car.

Diagrams of control systems for K4M and F4R engines are presented at the end of the article.

The sensor is based on the Hall effect. 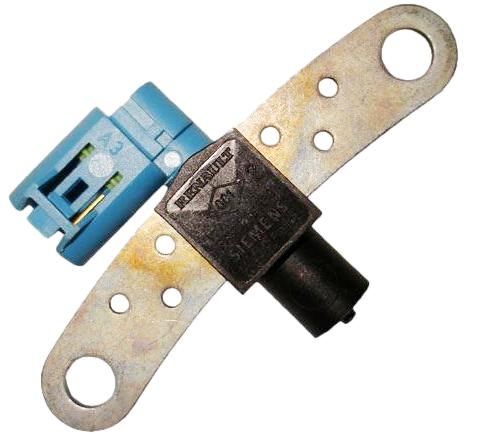 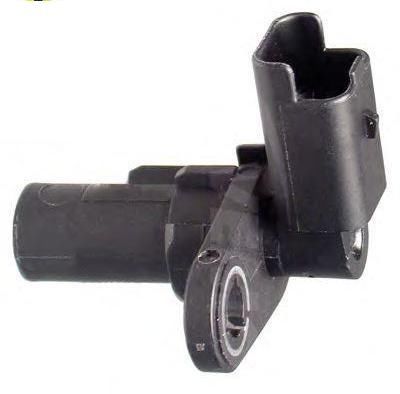 Figure 3 shows a crankshaft position sensor with an F4R engine

The sensor is installed in the front of the clutch housing above the timing ring on the flywheel.

The driving ring is a gear wheel.

When the crankshaft rotates, the flywheel teeth change the magnetic field of the sensor, inducing alternating current voltage pulses.

The control unit, based on the sensor signals, determines the crankshaft speed and sends pulses to the injectors.

If the sensor fails, the engine cannot be started.

The camshaft position (phase) sensor (on F4R engine only) is an inductive type mounted on the rear of the cylinder head. 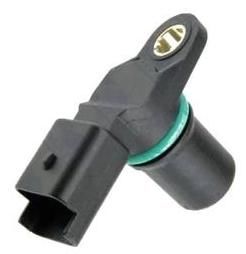 When the intake camshaft rotates, the protrusions on its front neck change the magnetic field of the sensor, inducing AC voltage pulses.

The signals from the sensor are used by the ECU to organize phased fuel injection in accordance with the order of operation of the cylinders, as well as to control the change in valve timing depending on the operating mode of the engine.

If a malfunction occurs in the camshaft position sensor circuit, the electronic unit memorizes its code and turns on the warning light.

The coolant temperature sensor is installed in the water distributor housing of the engine cooling system. 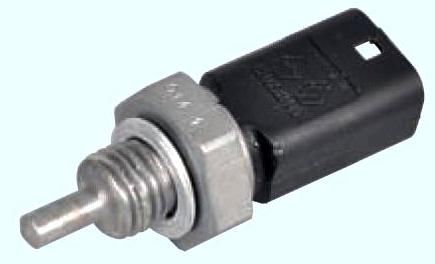 The sensitive element of the sensor is a thermistor, the electrical resistance of which changes inversely with the temperature.

The electronic unit supplies the temperature sensor circuit with a constant "reference voltage."

The sensor signal voltage reaches its maximum value on a cold engine and decreases as it warms up.

The electronic unit determines the engine temperature from the voltage value and takes it into account when calculating the injection and ignition control parameters.

In the event of a sensor failure or violations in the circuit of its connection, the ECU sets a malfunction code and stores it.

An additional thermistor is also installed in the sensor housing to control the coolant temperature gauge in the instrument cluster.

The throttle position sensor is installed only on the K4M engine. 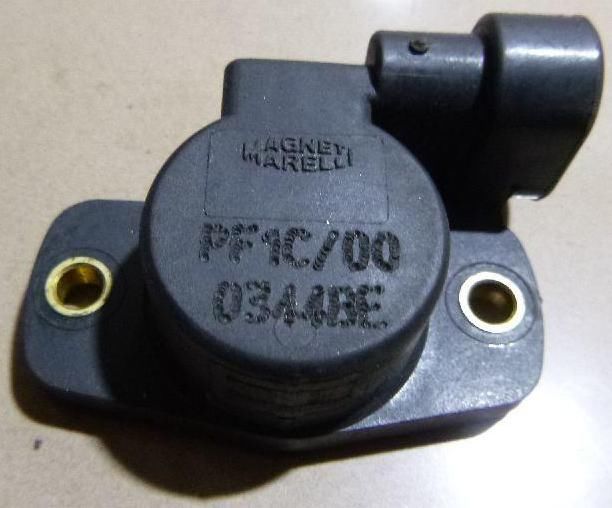 The sensor is a potentiometer, one end of which is supplied with "plus supply voltage (5 V), and the other end is connected to ground."

From the third pin of the potentiometer (from the slider), the output signal goes to the electronic control unit.

When the throttle valve is turned (from the action of the foot control), the voltage at the output of the sensor changes.

By monitoring the output voltage of the sensor, the ECU adjusts the fuel supply depending on the opening angle of the throttle valve (i.e. at the request of the driver).

The throttle position sensor does not require adjustment, as the control unit perceives idle (i.e. full throttle closing) as zero.

The control oxygen concentration sensor is used in the closed-loop injection system and is installed on the exhaust manifold. 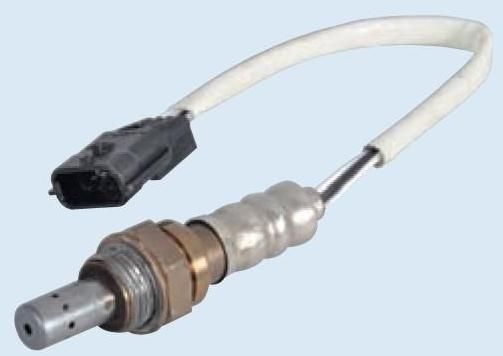 Information on the presence of oxygen in the exhaust gases is used to correct the calculations of the injection pulse duration.

The oxygen in the exhaust gas reacts with the sensor to create a potential difference at the sensor output.

By monitoring the output voltage of the oxygen concentration sensor, the controller determines which command to adjust the working mixture to the injectors.

A lambda probe is a vulnerable sensor in a vehicle's injection system.

Its resource ranges from 20 to 80 thousand km, depending on the quality of gasoline and oil in the engine, operating conditions.

On the recommendation of the plant, it needs to be changed every 75 thousand km. mileage of the car.

It is possible to "poison" the sensor electrodes after several refills with leaded gasoline.

With a faulty oxygen concentration sensor, the ECU goes into a mode in which its voltage is not taken into account to determine the parameters of the mixture.

The ECU continues to control the composition of the mixture, taking into account the temperature and parameters of other sensors.

The diagnostic oxygen concentration sensor works in the same way as the control sensor.

The signal generated by the diagnostic oxygen concentration sensor indicates the presence of oxygen in the exhaust gas after the catalytic converter.

A knock sensor is attached to the side of the cylinder block in the area between the 2nd and 3rd cylinders and detects abnormal vibrations (knocking shocks) in the engine. 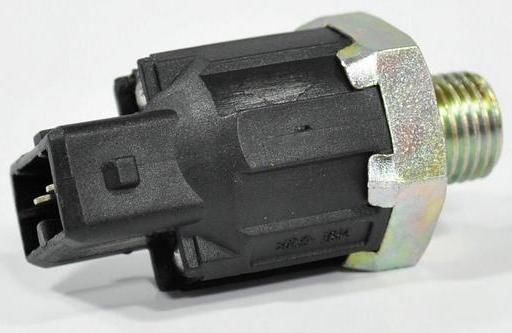 The sensitive element of the knock sensor is a piezocrystalline plate.

During detonation, voltage pulses are generated at the sensor output, which increase with an increase in the intensity of detonation impacts.

The electronic unit, according to the sensor signal, adjusts the ignition timing to eliminate detonation flashes of fuel.

During operation, the ECU also uses the vehicle speed data received from the speed sensor.

The sensor is mounted on the gearbox.

The principle of operation of the sensor is based on the Hall effect.

The sensor sends to the electronic control unit square-wave voltage pulses with a frequency proportional to the speed of rotation of the driving wheels.

The absolute pressure sensor in the receiver converts the degree of vacuum in the receiver to a change in electrical voltage, according to the value of which the ECU sets the parameters of the engine.

The sensor is installed on the receiver. 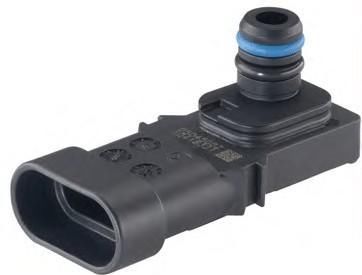 The sensor output voltage changes according to the intake manifold pressure, from 4.0 V (wide open) to 0.79 V (closed).

When the engine is not running, the sensor voltage control unit detects atmospheric pressure and adapts the injection control parameters to the specified altitude.

The barometric pressure values ​​stored in memory are periodically updated when the vehicle is moving evenly and when the throttle is fully open.

The variable valve timing solenoid valve (F4R engine only) is located in the cylinder head of the engine. 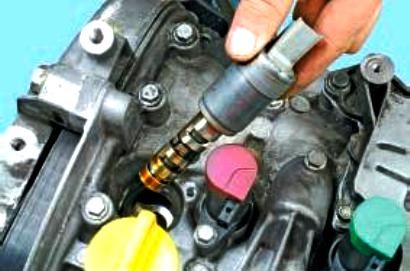 The valve regulates the oil pressure to the phase change actuator located at the front end of the intake camshaft.

The system optimally adjusts the valve timing, changing them over the entire range of values ​​of frequency and engine load, which increases power and torque at any speed mode.

When the engine is stopped, oil pressure causes the control valve spool to move to the latest camshaft position. 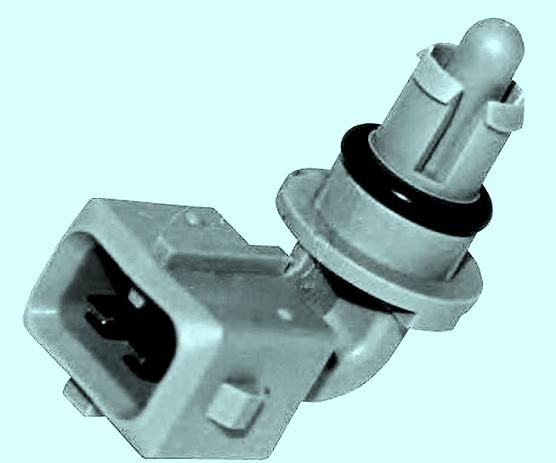 It also uses a thermistor whose resistance changes with temperature. The ECU constantly supplies voltage to the sensor.

The sensor signal voltage is maximum when the air in the intake manifold is cold and decreases as the temperature rises.

According to the voltage value, the unit makes adjustments when calculating the ignition timing. 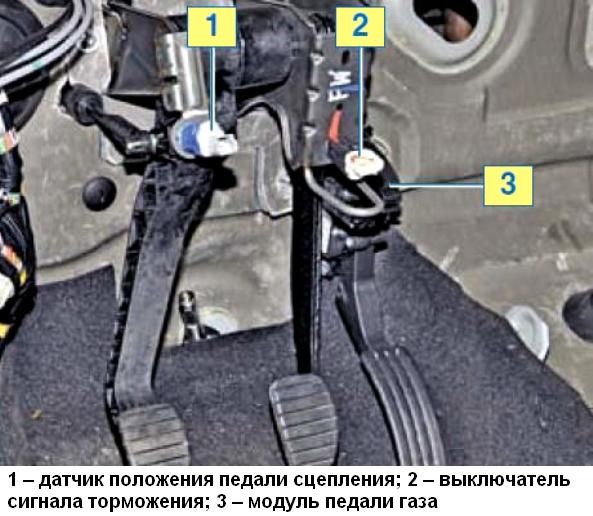 Based on the signals from the clutch pedal position sensor and the brake light switch, the ECU distinguishes between pressed and not depressed position of the pedals.

When the clutch pedal is depressed, the ECU limits the supply of fuel to the cylinders.

The diagnostic connector is used to output from the ECU memory the codes of malfunctions detected during the operation of the engine management system. 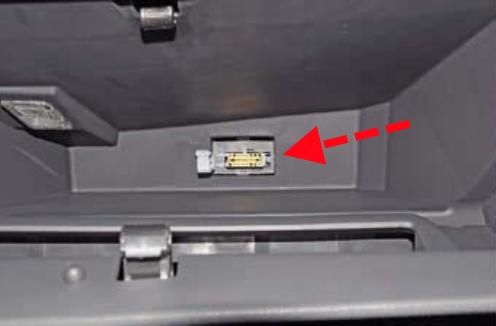 It is located in the passenger compartment, in a glove compartment on its back wall. The following main parameters of the engine operation are read through this connector:

- design load on the engine;

- air pressure in the intake pipe;

- vehicle speed (in motion - with a portable scanning device connected);

Before removing any components of the fuel injection control system, disconnect the wire from the negative battery terminal.

Do not start the engine if the battery cable lugs are loose.

Never disconnect the battery from the vehicle electrical system while the engine is running.

When charging the battery, disconnect it from the vehicle's electrical system. Do not expose the ECU to temperatures above 65 ˚C in operating condition and above 80 ° C when not operating (for example, in a drying chamber).

Do not disconnect or connect wires to the ECU while the ignition is on.

Disconnect the battery cables and the ECU harness connectors before performing electric welding on the vehicle.

Perform all voltage measurements with a digital voltmeter with an internal resistance of at least 10 megohms.

The electronic components used in the fuel injection system are designed for very low voltages, so they can easily be damaged by electrostatic discharge.

In order to prevent damage to the ECU, do not touch its terminals with your hands. 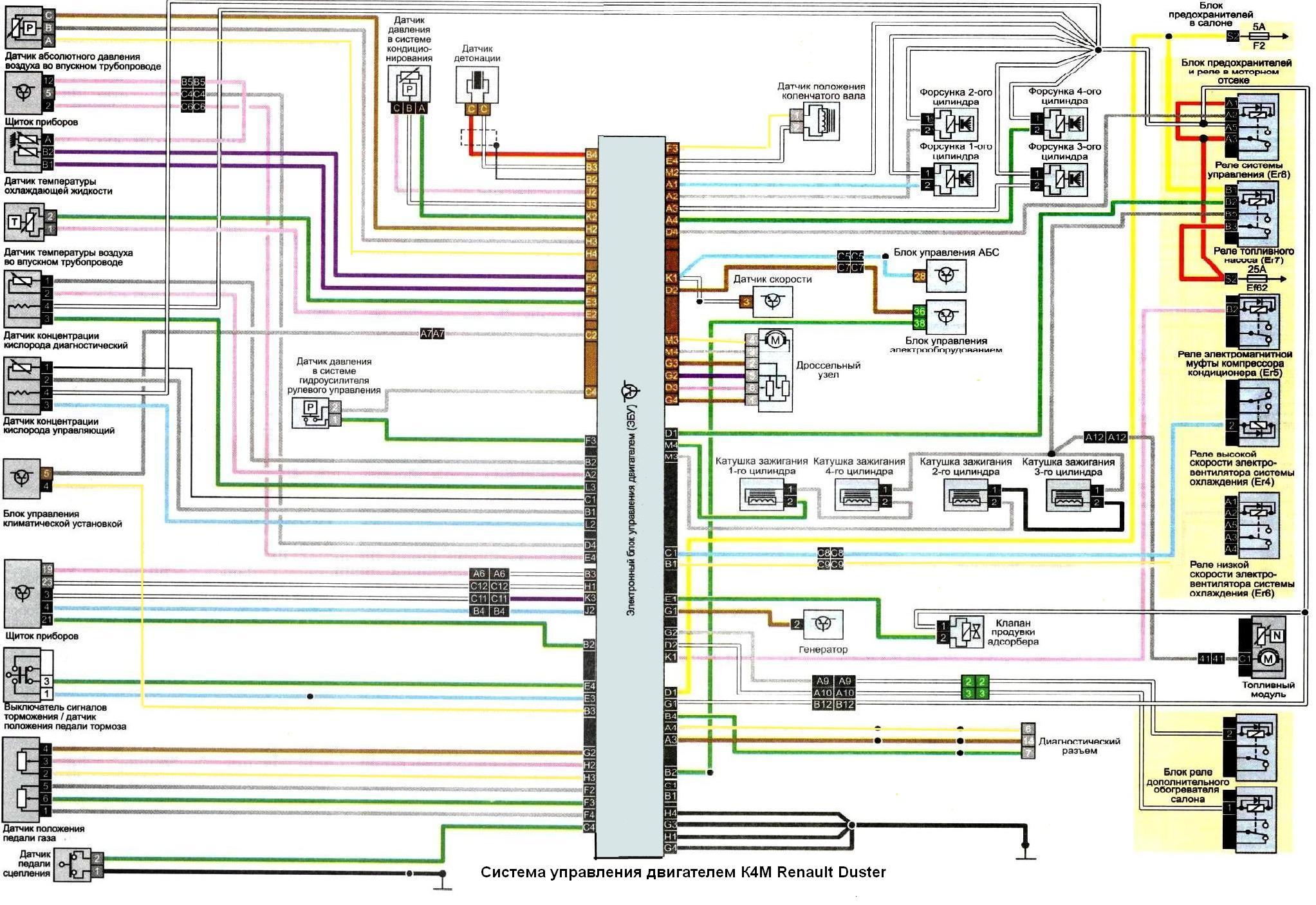 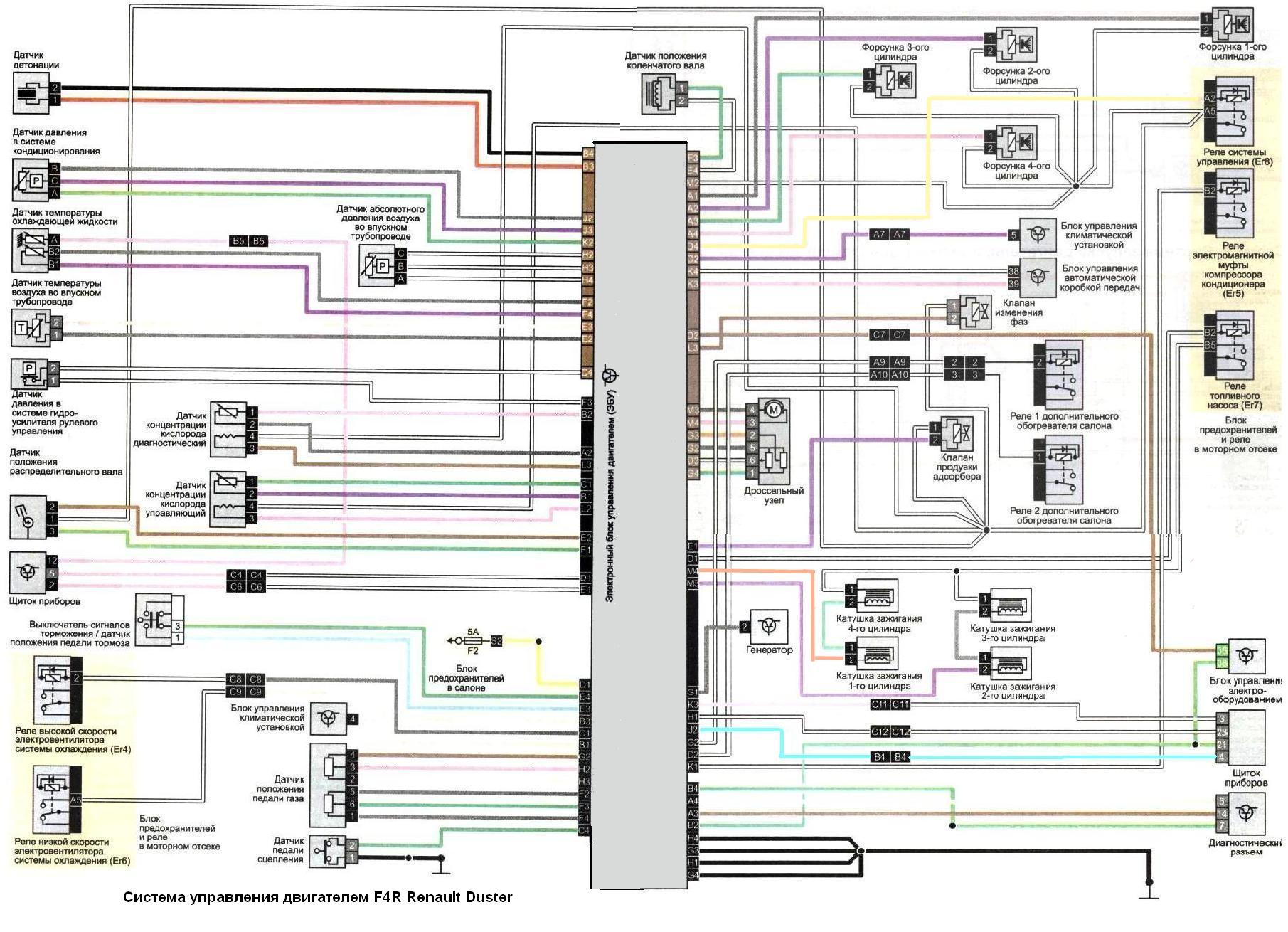 A diagram of the K4M engine management system is shown in Figure 16.

A diagram of the F4R engine management system is shown in Figure 17.