Electrical circuits are protected by fuses. Headlights, fan motors, fuel pump and other powerful consumers are connected via relays.

Fuses and relays are installed in mounting blocks located in the passenger compartment and in the engine compartment.

Fuses in the car

Inside the car, the mounting block is installed on the left side of the dashboard under the cover. 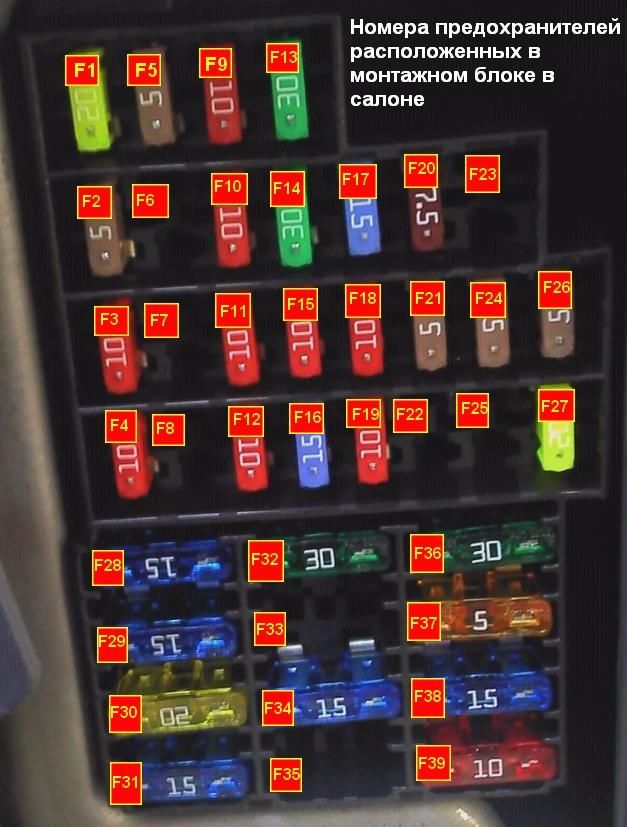 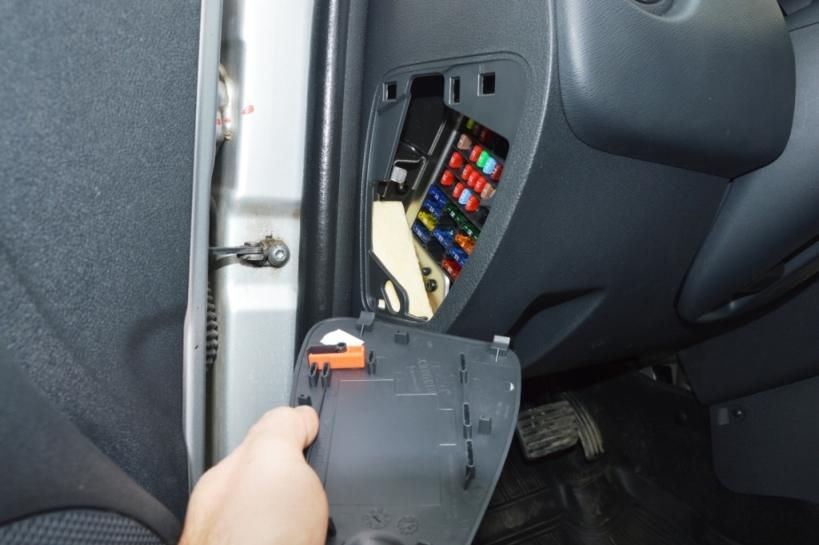 Before replacing a blown fuse, you need to find out the cause of the blown fuse.

Do not replace the fuse with a jumper or a fuse with a higher amperage, as this may damage electrical devices and cause fire.

To replace the fuse in the passenger compartment, open the cover in the instrument panel

Removing the replaceable fuse with tweezers 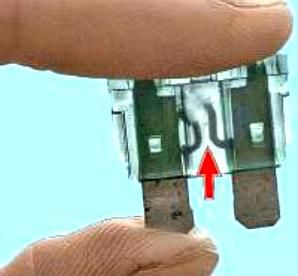 The figure shows a blown fuse (the jumper shown by the arrow is blown).

To replace the fuse, install a spare fuse of the same rating and color.

Fuses in the engine compartment 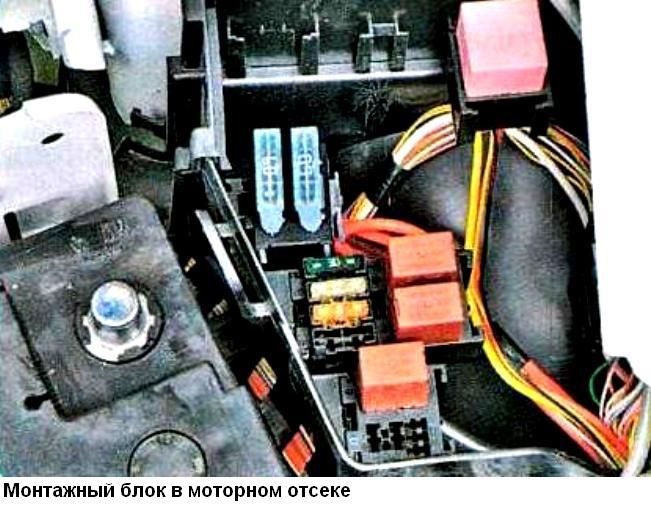 In the engine compartment, fuses and relays are located on the right and left side of the battery. 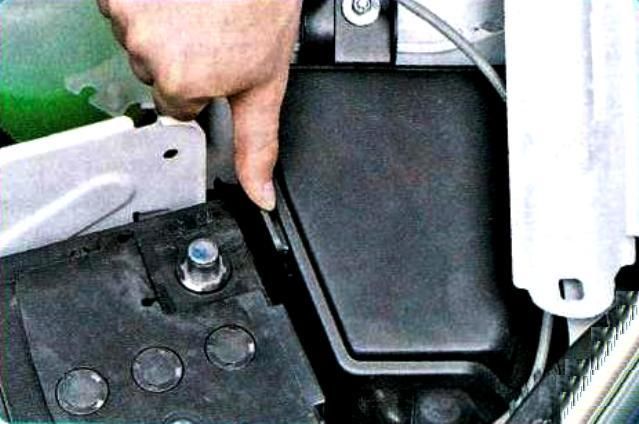 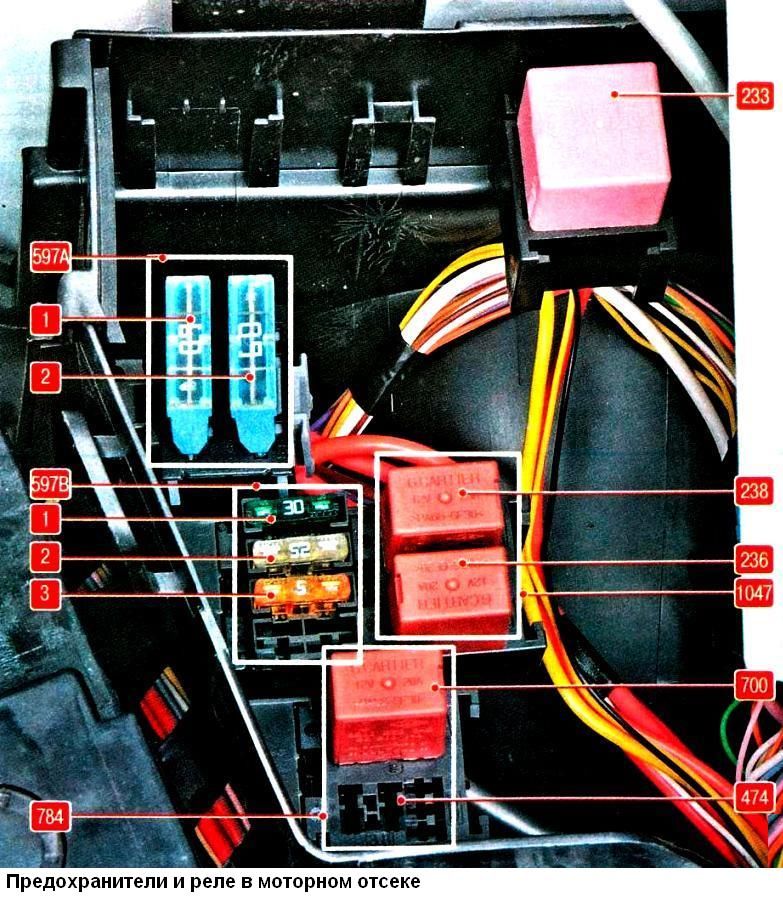 Squeeze the latch of the mounting block cover

If you need to replace the relay or fuse, remove it by shaking it from side to side

Methods for checking electrical circuits of a car

When replacing fuses, do not use screwdrivers and metal tools - this can cause a short circuit in the electrical circuits.

It is forbidden to disconnect the battery while the engine is running; violation of this rule will cause damage to the voltage regulator and elements of the car's electronic equipment.

To avoid the failure of the diodes of the generator rectifier unit, it is forbidden to check them with a megohmmeter or a test lamp supplied with a voltage of more than 12 V, and also to check the electrical circuits on the car with such devices without disconnecting the wires from the generator.

When carrying out electric welding work on a car, it is necessary to disconnect the wires from the terminals of the battery and generator, as well as the blocks with wires from the electronic engine control unit.

Do not touch the ignition system components and high-voltage wires while the engine is running.

Regularly clean the battery terminals and cable lugs from oxides and dirt.

When recharging the battery with the charger, disconnect the wires from the battery terminals.

Before you start troubleshooting any electrical circuit, carefully study the corresponding diagram in order to understand its functional purpose as clearly as possible.

The circle of troubleshooting is usually narrowed by the gradual identification and elimination of normally functioning elements of the same circuit.

If several elements or circuits fail at the same time, the most likely cause of failure is a blown fuse or failure of contact with ground "(different circuits in many cases can be connected to the same fuse or ground terminal).

Failures of electrical equipment are often explained by the simplest reasons, such as corrosion of connector contacts, fuse failure, blown fuse or relay damage.

Visually check the condition of all fuses, wiring and connectors on the circuit before proceeding with a more detailed check of the health of its components.

In the case of using diagnostic tools for troubleshooting, carefully plan (in accordance with the attached wiring diagrams) to which points on the loop and in what sequence the device should be connected for the most efficient troubleshooting.

In addition, you should always have in your car a set of wires for starting the engine from an external source (battery of another car), equipped with alligator clips and preferably an electrical circuit breaker.

They can be used to bypass and connect various elements of electrical equipment for circuit diagnostics.

As already mentioned, before starting to check the circuit using diagnostic equipment, determine its connection points from the diagrams.

Checking the presence of supply voltage is carried out in the event of a break in the electrical circuit.

Connect one of the circuit tester leads to either the negative terminal of the battery or make good contact with the vehicle body.

Connect the other lead of the tester to the terminal on the connector of the circuit under test, preferably the one closest to the battery or fuse.

In most cases, the cause of failure is loosening of the connectors and damage to the contacts themselves (oxidation).

Purpose of fuses in the passenger compartment

F23 (-) Space for the installation of the security alarm

Purpose of relays and fuses in the engine compartment

One method for finding a short circuit is to remove the fuse and connect a probe lamp or voltmeter instead.

There must be no voltage in the circuit. Tug the wiring while observing the probe lamp.

If the lamp starts blinking, then there is a short to ground in this wiring harness, possibly caused by fraying of the wire insulation.

A similar check can be carried out for each of the components of the electrical circuit by closing the corresponding switches.

Disconnect the battery and connect one of the self-powered probe lamp leads to a known good ground point, and connect the other lamp lead to the tested harness or connector terminal.

If the lamp illuminates, ground contact is OK (and vice versa).

After disconnecting power to the loop, test it with a self-powered probe lamp.

In the same way, you can check the serviceability of the switch by connecting the probe to its contacts. When the switch is turned ON, the probe lamp should illuminate.

Localization of the cliff

When diagnosing a suspect in the presence of an open circuit in an electrical circuit, it is quite difficult to visually detect the cause of the malfunction, since it is difficult to visually check the terminals for corrosion or a violation of the quality of their contacts due to limited access to them (usually the terminals are covered by the contact connector housing).

Do not forget about this when trying to localize the cause of the suspect's failure in the presence of an open circuit.

Unstable failures can be the result of terminal oxidation or poor contact quality.

Diagnostics of faults in electrical circuits is not a difficult task, provided there is a clear understanding that electric current flows to all consumers (lamp, electric motor, etc.) from the battery through wires through switches, relays, fuses, fuses, and then returns to the battery through the mass (body) of the car.

Any problems associated with electrical equipment failure can be caused by the loss of electrical current from the battery or by the return of current to the battery.