Removal and installation of a turbocharger Cummins ISF2.8 Gazelle Next

The turbocharger may not be disassembled or repaired.

The condition of the turbocharger should be checked by the run-on time of the rotor when the diesel engine is stopped.

To do this, after 3 ... 5 minutes of operation at the minimum idle speed mode, the diesel engine is brought to the maximum speed mode, and then turn off the fuel supply.

The rotation of the turbocharger rotor after stopping the diesel engine must be monitored for at least 5 s.

A smooth, constant level sound with a gradual decay indicates the normal condition of the turbocharger,

One of the reasons for a decrease in diesel power and increased smoke can be a decrease in boost pressure due to contamination of the compressor flow path, which can be determined by the tight rotation of the rotor.

If the rotor rotates tightly, then it is necessary to partially disassemble the turbocharger and flush the compressor part.

We clean the surface and the oil inlet to the turbocharger.

We apply penetrating fluid to the nuts and bolts of the turbocharger-exhaust manifold connection. 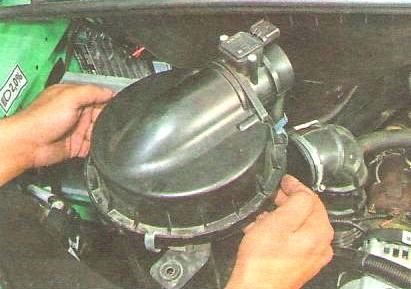 We remove the air supply sleeve 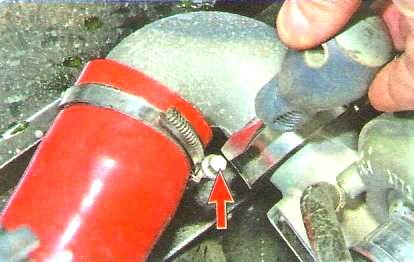 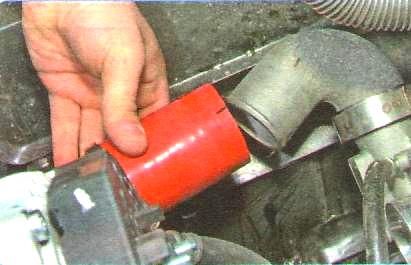 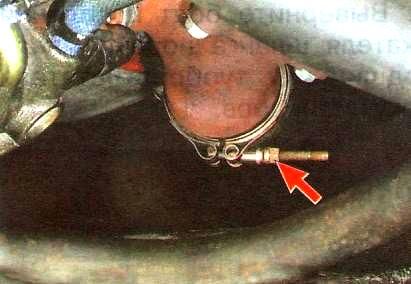 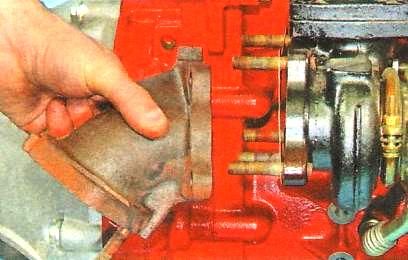 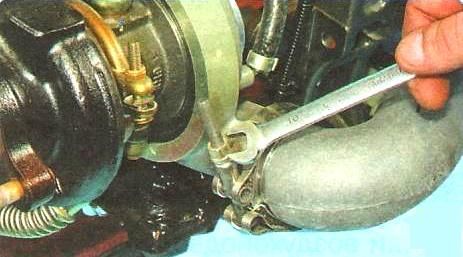 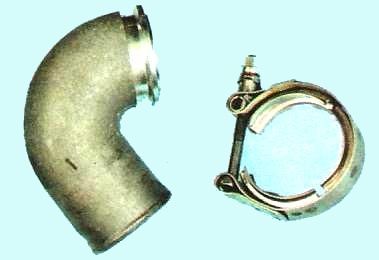 We loosen the tightening of the fastening clamp

Removing the pipeline adapter from the turbocharger to the cooler 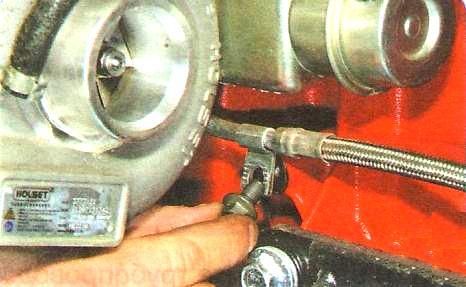 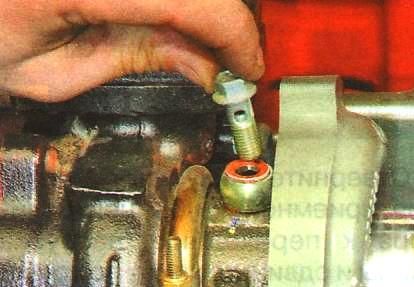 Unscrew the bolt of the holder for the oil supply hose

Unscrew the bolt the fitting for the hose tip 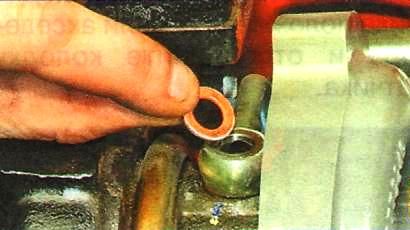 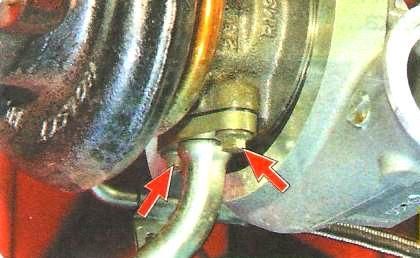 Disconnect the hose and remove the sealing washers 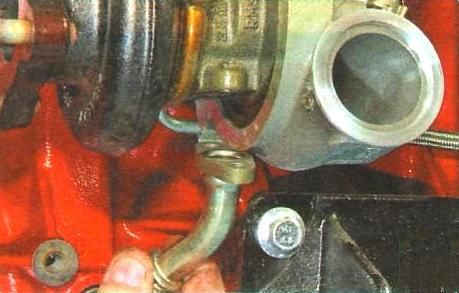 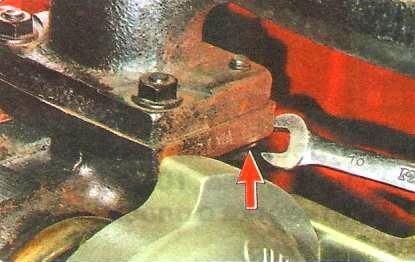 Disconnect the tube from the turbocharger housing 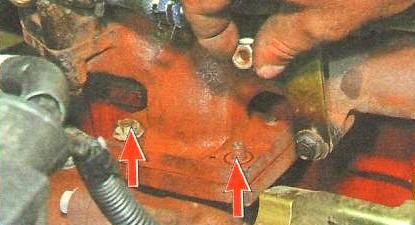 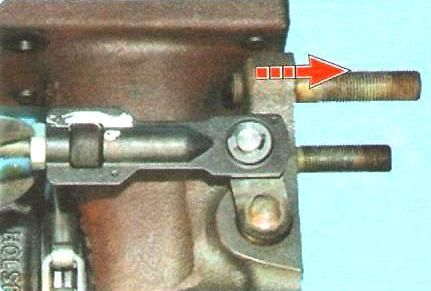 We remove the turbocharger.

We check the operation of the bypass valve drive.

To do this, move the rod (arrow in the figure), the valve lever should move smoothly, without jamming, and after releasing the rod, it should return to its original position.

Checking the adjustment of the bypass valve drive 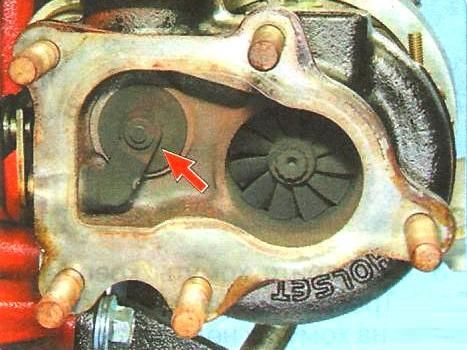 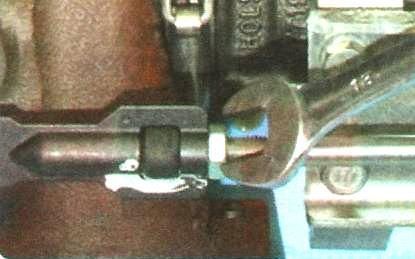 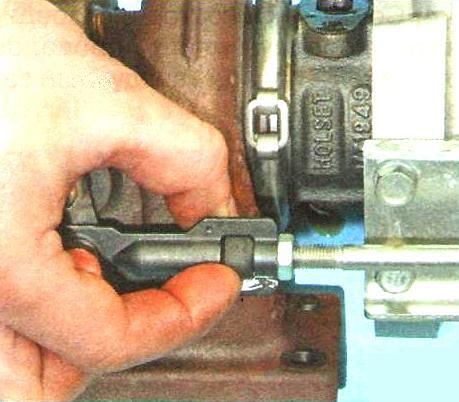 In its free state, it should be firmly pressed against the saddle.

If the valve does not fit tightly to the seat, then loosen the lock nut.

Turning the adjusting nut, we achieve the desired valve position.

After adjustment, tighten the lock nut and check the tightness of the valve. 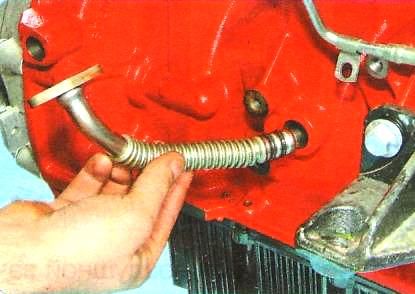 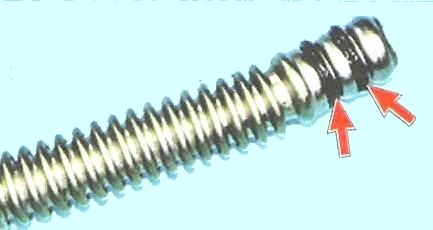 If necessary, remove the tip of the oil drain tube from the turbine bearing from the hole in the cylinder block. 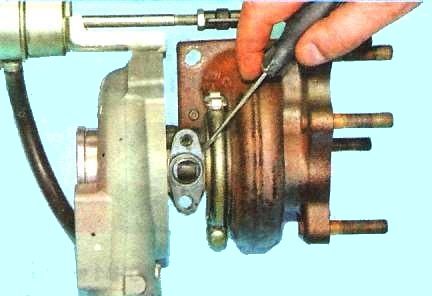 Disconnect the oil drain pipe flange seal from the body

We replace the seal. We clean the mating surfaces of the turbocharger, exhaust manifold and front pipe. 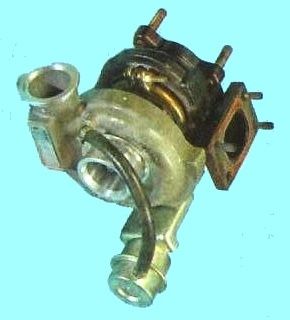 Install the turbocharger in reverse order. 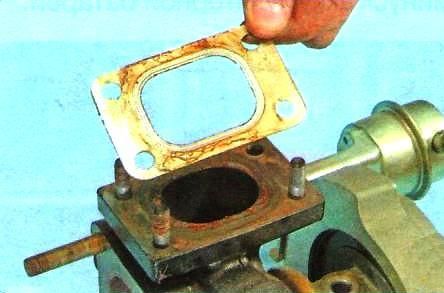 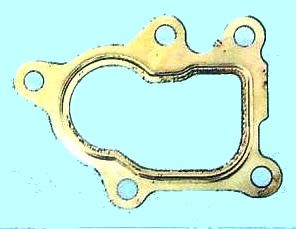 We replace the gasket between the turbine adapter

We collect all the parts in reverse order.

Tightening torque for the three retaining nuts and one bolt for the exhaust manifold turbocharger 24 Nm.