We replace rear suspension parts in case of malfunctions caused by wear, aging or deformation.

The shock absorber is removed when it loses its working properties, the destruction or severe wear of the silent block of the lower mount, the failure of the rubber pads of the upper mount, cover or shock absorber compression stroke buffer.

We perform work on a flat horizontal platform or a viewing ditch.

To avoid damage to the rear wheel brake hoses, do not remove two shock absorbers at the same time with the rear of the car suspended.

In the trunk, open the hatch cover to access the upper shock absorber mount 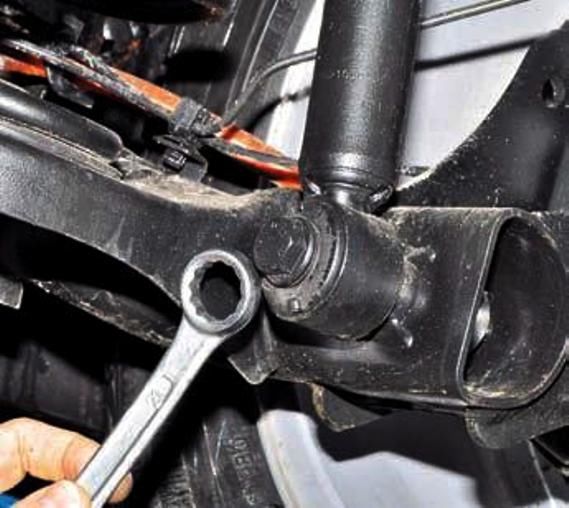 Unscrew the bolt securing the shock absorber to the beam lever

The final tightening of the shock absorber mounting bolts to the rear suspension arms must be done with the vehicle on wheels.

Finally tighten the bolts of the shock absorbers to the rear suspension arms.

We install the car on a viewing ditch or lift

We unscrew the bolt of the lower shock absorber mount, as described above

Hang out the back of the car and fix it on the stand. 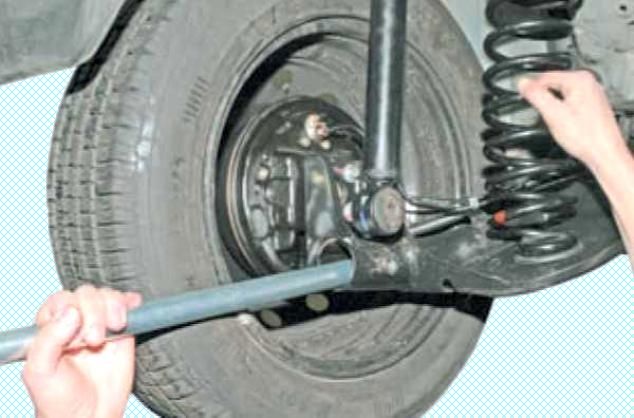 Pull down the pipe section, depressing the beam lever, and take out the spring.

The top spring spacer usually sticks to the body.

We make sure that there are no deformations and gaps on the gaskets. 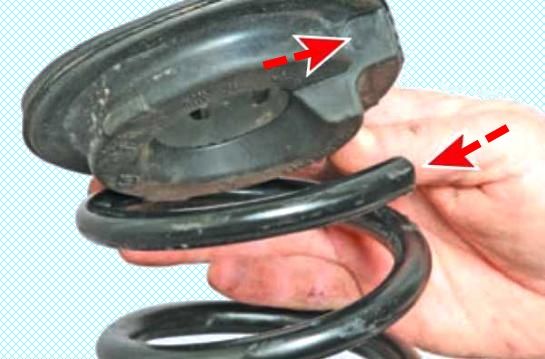 Before installing the spring, install the top gasket on it so that the end of the upper coil of the spring rests on the ledge of the gasket.

Then, so that the top gasket does not move when mounting the spring, we attach it to the spring with tape or electrical tape. 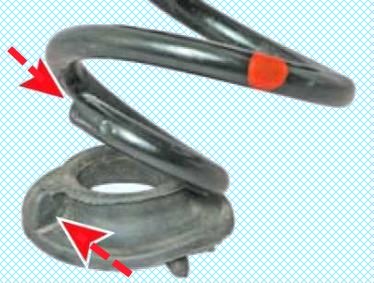 Install the lower spring spacer onto the lug of the lever bracket so that the gasket pin enters the bracket hole (shown on the removed beam).

Leaving the beam lever down, we put the upper end of the spring with the gasket on the protrusion of the body bracket

Further assembly is carried out in the reverse order.

If during the inspection of the beam, breaks or swelling of the rubber of the hinge are revealed, both silent blocks must be replaced.

Preparing the car for work. We install on a viewing ditch or on a lift. For work, we also need an adjustable stop.

Raise the rear of the car and place stands.

We remove the parking brake cable from the lug of the beam bracket. We install an adjustable stop under the beam lever.

If the car is equipped with an anti-lock braking system (ABS), we remove the rubber clutch of the speed sensor wiring harness from the holder on the lever.

Disconnect the lower shock absorber mount from the beam arm.

We lower the right side of the beam on an adjustable stop until the fuel tank stops interfering with the release of the lever mounting bolt.

When lowering the beam, make sure that the brake hoses of the rear wheels are not too tight.

Removing the bolt, remove the bracket from the lever.

The silent block of the lever perceives a significant part of the loads along the axis of the car, therefore, in cross section, the rubber massif of the silent block is asymmetrical.

We note how the silent block was installed relative to the hole in the beam in order to install the new one as well. 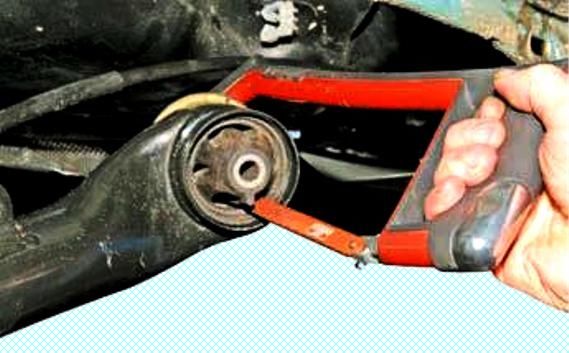 It is best to press the silent block out of the lever with a special puller.

If there is no puller, you can facilitate removal by cutting the outer clip of the silent block.

This will significantly reduce the tightness of the silent block in the lever hole.

After that, with a mandrel or a piece of pipe of a suitable diameter, we knock out the silent block from the lever from the side of the threshold, applying force to the outer clip.

Before pressing in a new silent block, we clean the hole in the lever.

Insert the silent block into the hole of the lever, orienting it according to the marks. 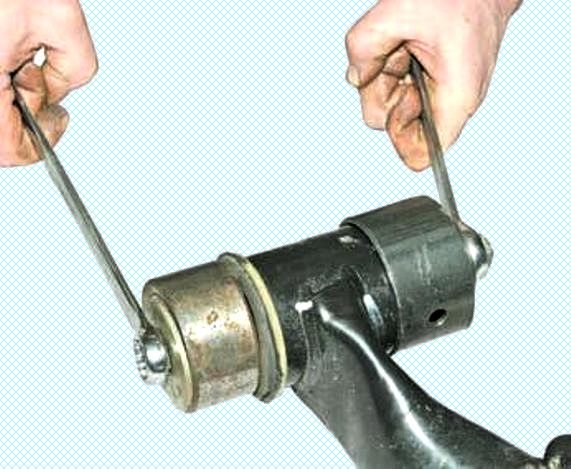 Install the rear suspension beam arms in the reverse order.

We finally tighten the nuts of the bolts of the levers to the brackets when the car is on wheels.

- nut of the bolt of the rear suspension arm to the body bracket 125 Nm.

We remove the beam for replacement in case of damage.

We carry out work on a viewing ditch or overpass.

Remove the brake pads of the rear wheels.

We remove the tips of the parking brake cables from the holders on the levers of the rear suspension beam.

Disconnect the brake hoses of the rear wheels from the brake pipes located on the beam.

Disconnect the wheel speed sensors from the brake pads.

We substitute an adjustable stop under the beam

Disconnect the lower shock absorber mounts from the beam arms and remove both rear suspension springs. 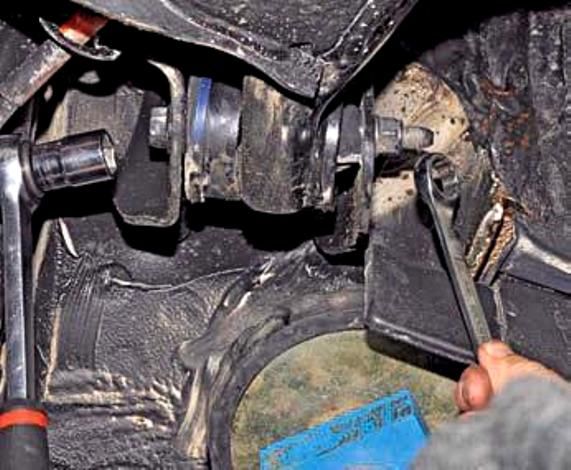 Using an 18 spanner wrench, unscrew the nut of the bolt securing the right arm of the beam to the bracket, holding the bolt with a wrench of the same size.

After unscrewing the nut of the bolt securing the right arm to the bracket, the bolt cannot be removed because it rests against the fuel tank 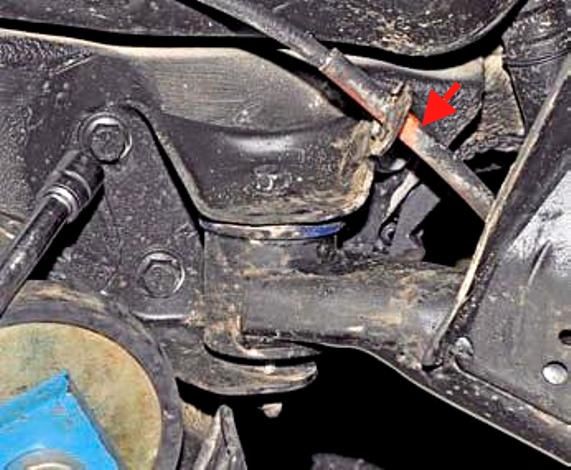 Using a 16-head with an extension, unscrew the three bolts securing the right lever bracket to the body and remove the parking brake cable from the bracket eye (shown by the arrow).

With the same tools, unscrew the nut of the bolt securing the left arm to the bracket

Remove the bolt from the hole in the bracket and silent block or knock it out with a soft metal drift. 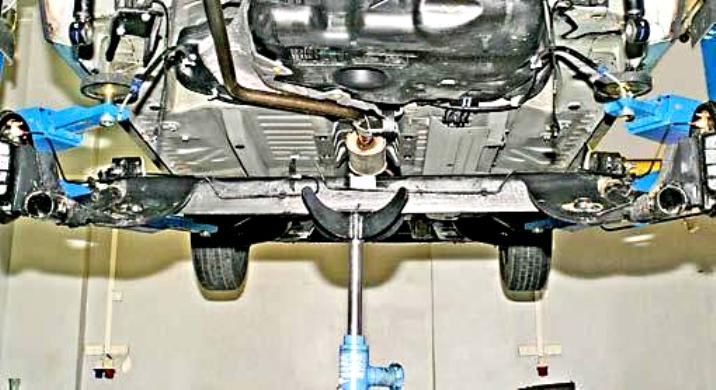 We remove the left arm of the beam from the eye of the bracket and lower the beam on the adjustable stop, holding it on both sides.

We dismantle the bracket of the right lever, the rear wheel brake shields, brake pipes and wheel trunnions from the beam.

- nut for fastening the rear suspension arm to the body bracket - 125 Nm;

- the bolt of the suspension arm bracket to the body - 62 Nm;

- Bolt for fastening the rear wheel trunnion to the flange of the rear suspension beam - 80 Nm;

We replace the bearing when it fails - noise, howl in the rear wheel area.

Remove the rear wheel and dismantle the brake drum 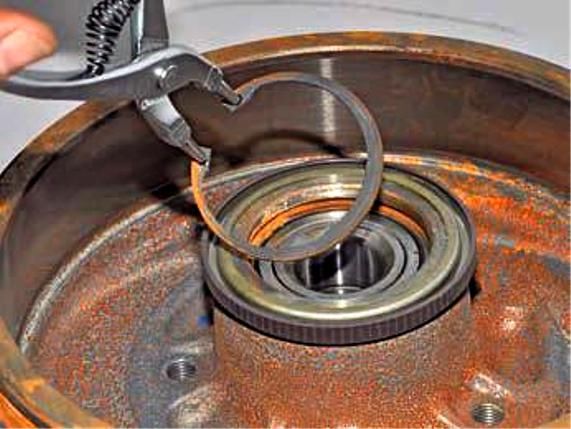 On the inside of the drum, use circlip pliers to remove the bearing circlip.

The bearing to be replaced is knocked out of the drum seat using a suitable mandrel, placing two wooden blocks under the brake drum.

Before installing a new bearing, we clean the seating surface under it in the brake drum.

We install the brake drum on the wooden blocks with the other side and insert the bearing into the drum seat.

We press in the new bearing with the puller until it stops, applying force through the mandrel to the outer ring of the bearing.

In this case, the outer ring of the old bearing can be used as a mandrel.

When pressing the bearing, be careful not to damage the rear wheel speed sensor ring that is pressed onto the drum from the inside.

Install the retaining ring in the groove of the drum.

Check the condition of the trunnion. If its seating surface for a bearing or thread for a nut is damaged, we replace the pin

We mount the brake drum on the trunnion.