Removing the power steering pump of a Nissan Almera car 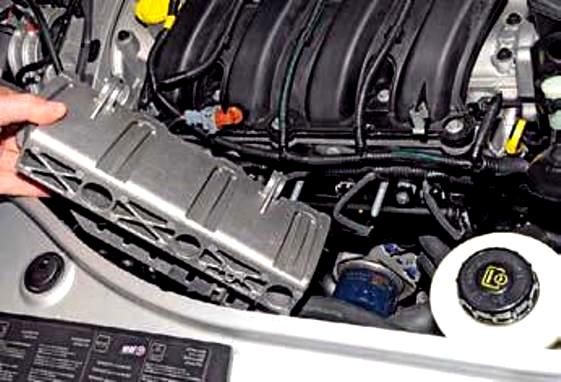 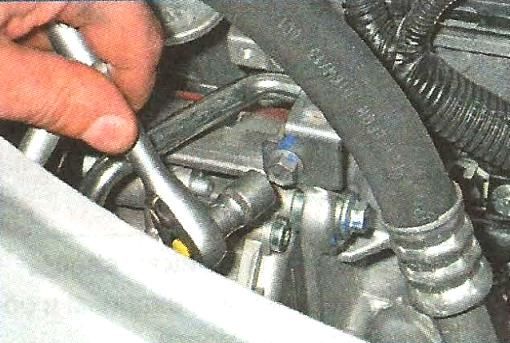 With a head of 10, we unscrew the bolt securing the holder of the discharge tube 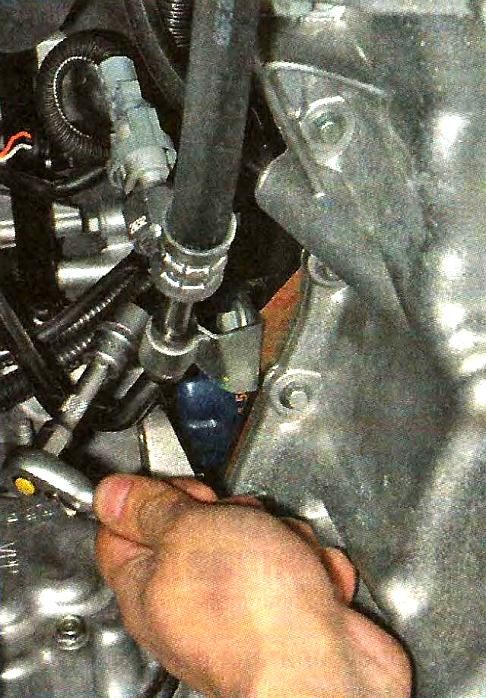 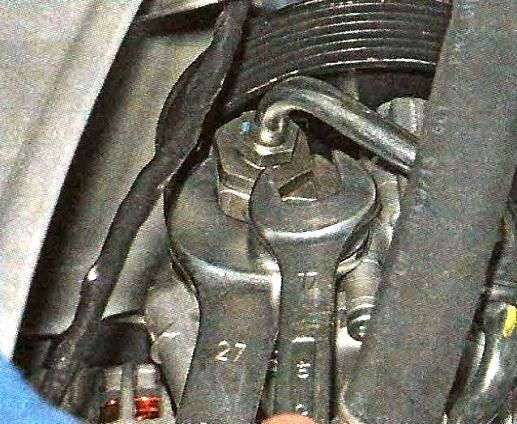 With a head of 13, we unscrew the bolt of the clamp that attracts the discharge pipe to the cylinder block 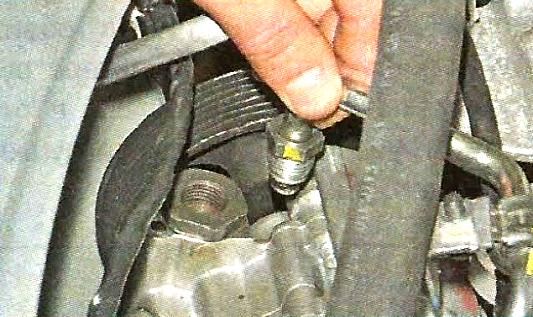 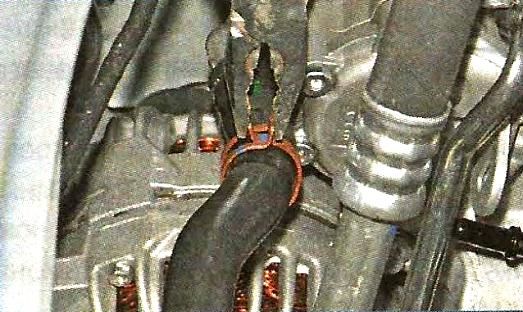 A rubber ring is installed in the joint, you need to inspect it and replace it if damaged 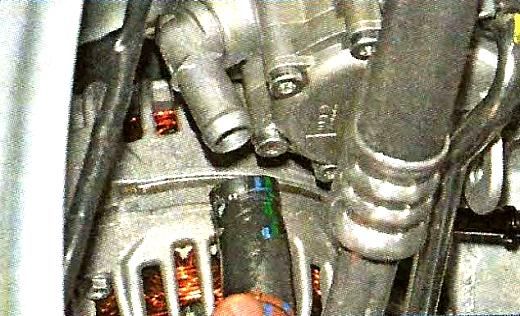 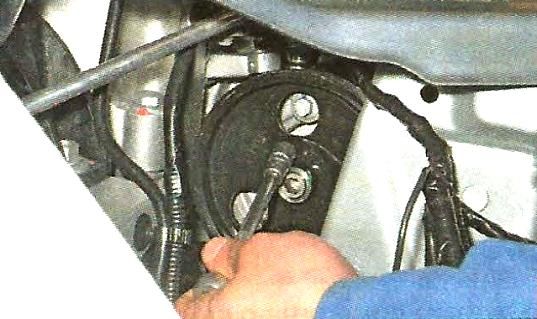 Remove the hose from the pump nozzle.

Insert plugs of a suitable size into the holes of the tube, hose and pump fitting

Turning the pump pulley, align the hole in the pulley with the head of one of the three bolts securing the pump to the engine bracket

With a 10 head, unscrew the bolt securing the pump to the engine bracket

Also unscrew the other two bolts 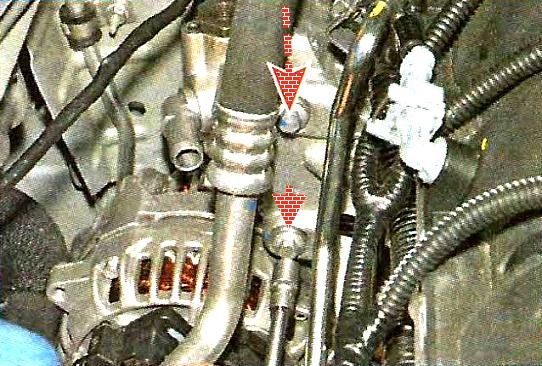 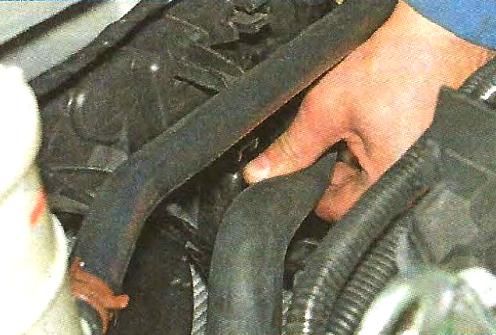 With a 10 head, unscrew the two pump mounting bolts on the opposite side of the bracket

Remove the radiator inlet hose from the holder on the fan casing and take it down. 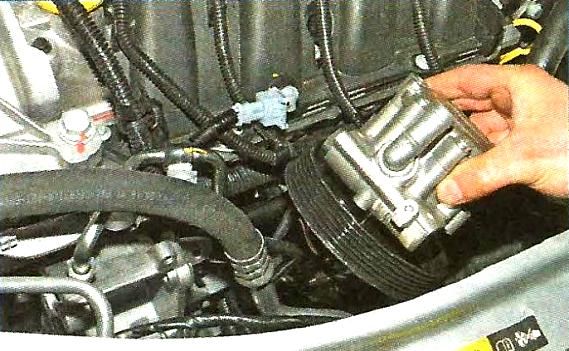 Install the power steering pump in the reverse order.

Bleeding the power steering system is necessary to remove air that has entered the hydraulic drive during the repair or replacement of individual components of the system.

Air trapped in the hydraulic drive causes a decrease in the effectiveness of the power steering. 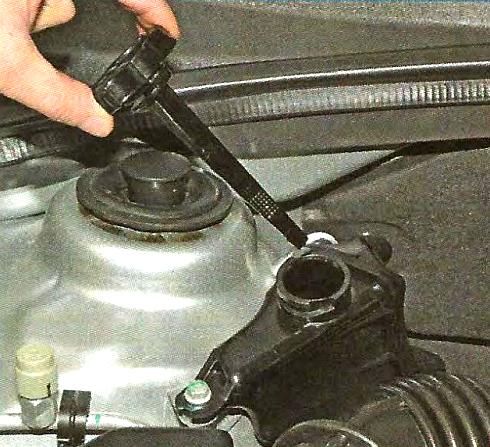 To bleed the hydraulic system on an idle cold engine, unscrew the cap of the power steering reservoir 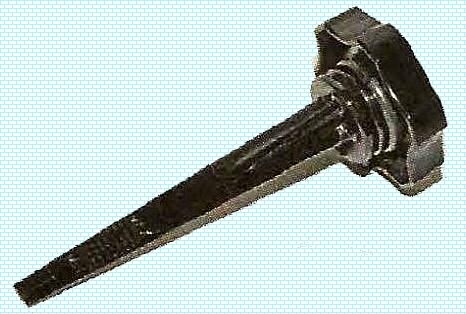 Adding liquid to the tank

Top up to the MINI mark

We start the engine and at idle, check the fluid level in the tank.

When the liquid level drops, add it to the MINI mark.

Several times we turn the steering wheel left and right until it stops, making sure that the liquid level in the tank is near the MINI mark, and if necessary, add liquid.

We return the steered wheels to the position of the rectilinear movement of the car and let the engine run for another two or three minutes.

Then again turn the steering wheel left and right until it stops and, if necessary, add liquid to the tank to the MINI mark.

Stop the engine and check the fluid level in the tank again.

After warming up and stabilizing the temperature of the working fluid, its level should be at the MAXI mark, and in a cold state it should not fall below the MINI mark.

Close the cover of the power steering reservoir.

Normal operation of the hydraulic booster should not be accompanied by increased noise, and no air bubbles should be visible in the liquid.

The effort on the steering wheel with the engine running should be significantly less than when the engine is not running.

The noise of the power steering when the front wheels are turned to the limit is not a malfunction.

NISSAN Power Steering Fluid or equivalent is poured into the power steering reservoir in the amount of 1.0 liters.

Remove the pump as described above 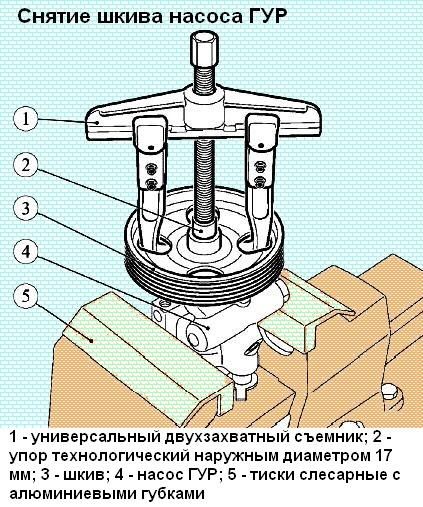 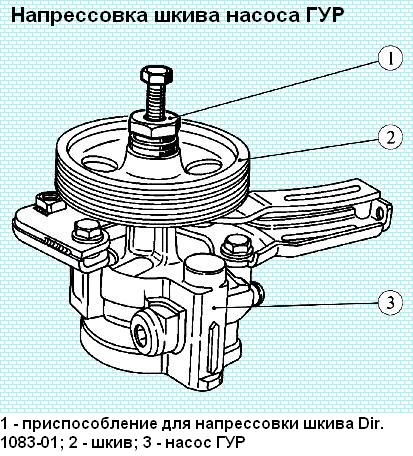 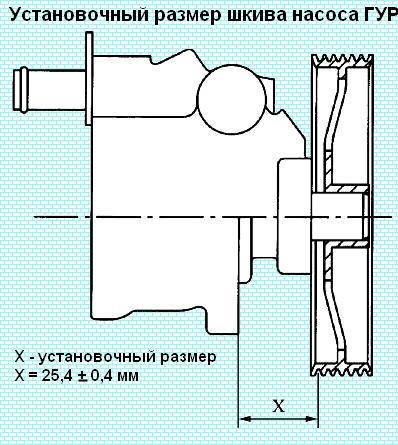 Using a tool, we press the pulley

When pressing the pulley, the installation dimension must be ensured.

Before pressing on, the pulley seating surface and the threaded surface of the force screw of the pulley press tool must be lubricated.