The covers and the stator housing are tightened with two bolts.

Permanent magnets are fixed in the stator housing.

The rotation from the armature shaft of the electric motor is transmitted to the drive gear through the freewheel.

When the key in the ignition switch is turned to position “D” (engine start), the voltage from the battery is applied to the retracting and holding windings of the traction relay, as a result, the drive lever moves and the starter gear engages with the gear rim of the engine flywheel.< /p>

At the same time, the armature of the traction relay closes the power contacts (at this moment, the retractor winding is turned off) and voltage is supplied to the starter motor from the battery.

The starter armature rotates the engine crankshaft through the freewheel.

There is a lot of noise when the starter armature is rotating:

- Violation of contacts in the connections, breakage of wires in the power supply and starter control circuits

- Violation of the ignition switch

Repair or replace the starter

Traction relay energizes but starter armature does not rotate or rotates too slowly:

Starter engages but gear does not engage:

- Nicks on the teeth of the drive gear or flywheel rim

Starter does not engage after engine start:

- Key stuck in the ignition in the "D" position

Repair or replace the ignition switch

- Closing the contacts of the ignition switch

Repair or replace the starter 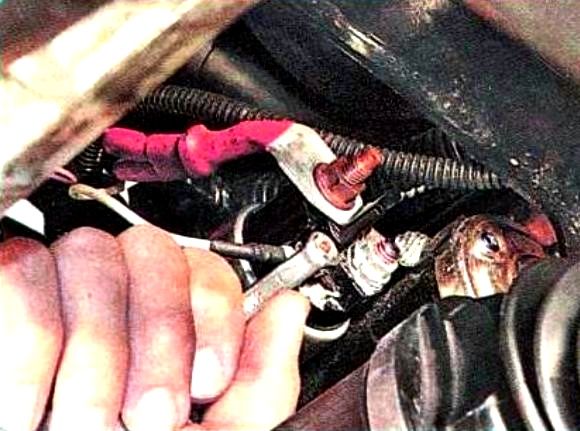 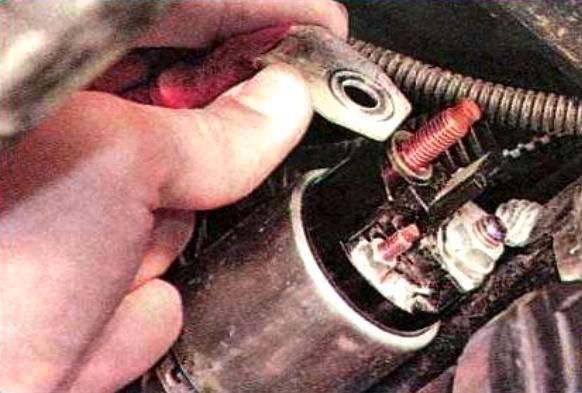 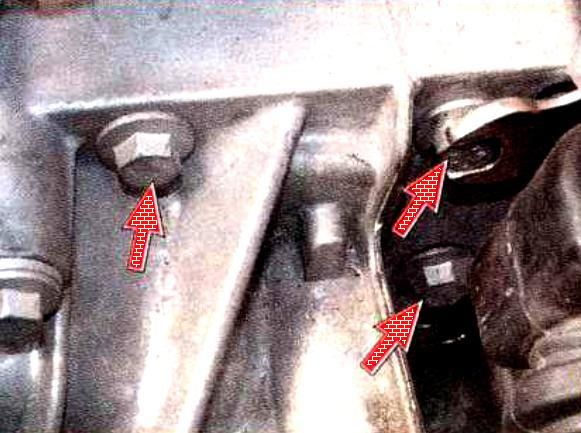 Remove the wire from the contact bolt of the traction relay 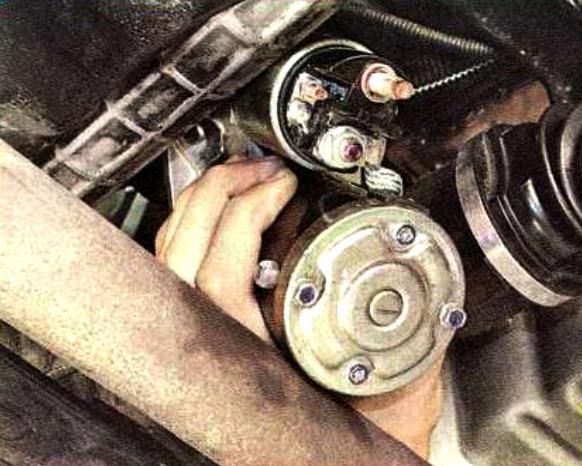 Install the starter in reverse order

Before disassembling the starter, you need to check its serviceability.

Using a screwdriver, we check the ease of movement of the shaft drive freewheel

We connect the negative terminal of the battery with the starter housing, and the positive terminal with the output of the control wire of the traction relay.

The starter armature should begin to turn.

Otherwise, the starter needs to be repaired. 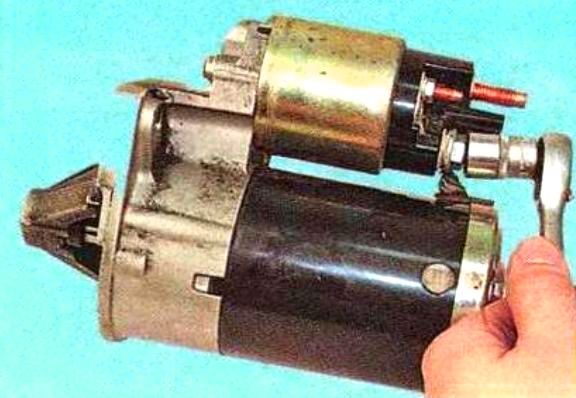 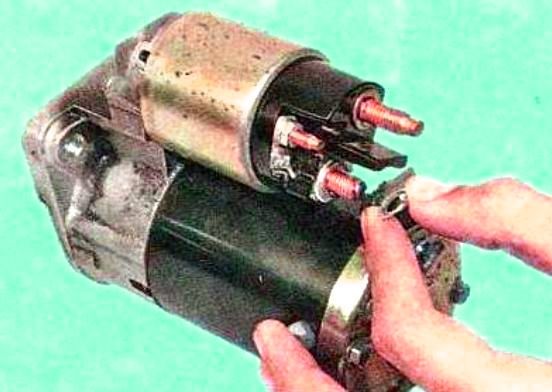 Disconnect the bus from the contact bolt of the traction relay 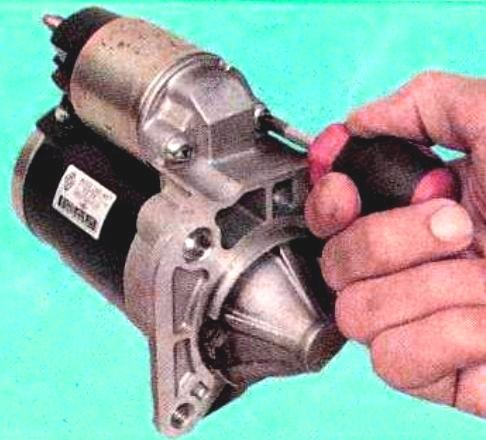 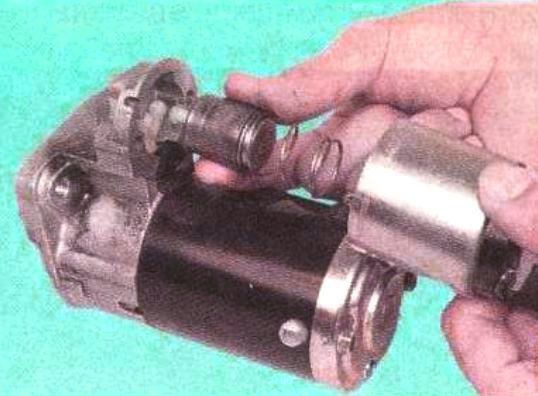 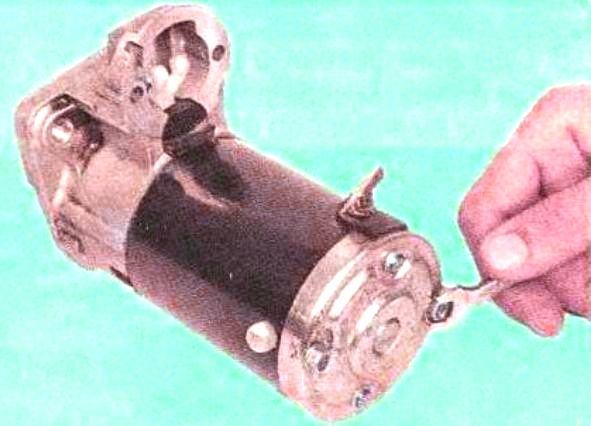 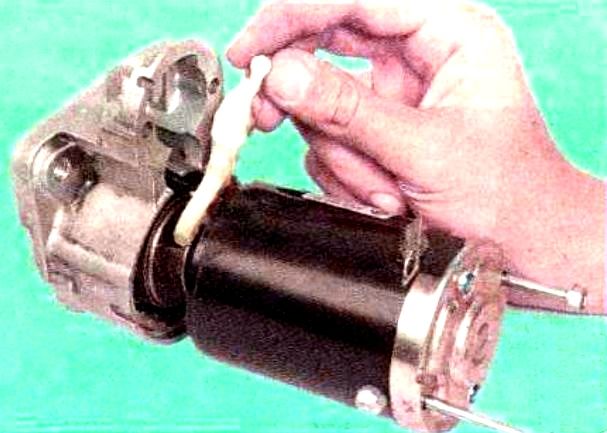 Disconnect the starter cover and housing, remove the lever support along with the rubber spacer

And the drive lever 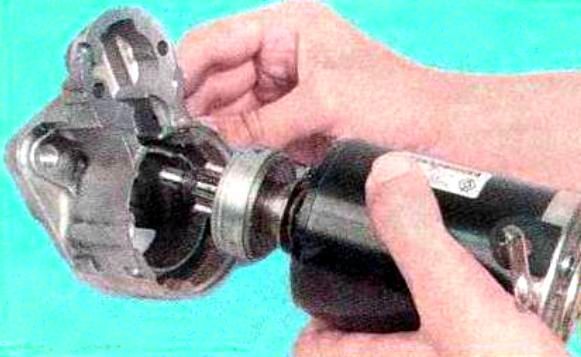 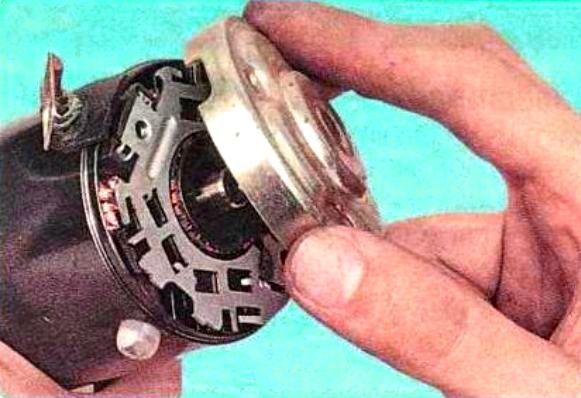 Remove the drive side cover

Remove the brush holder from the anchor 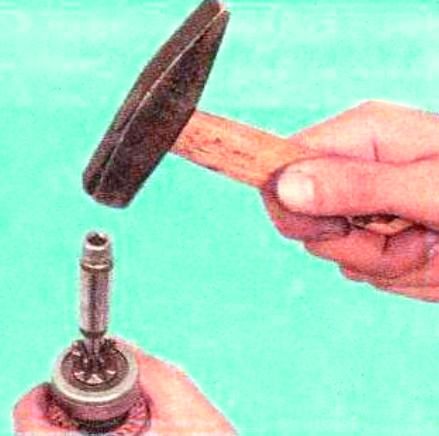 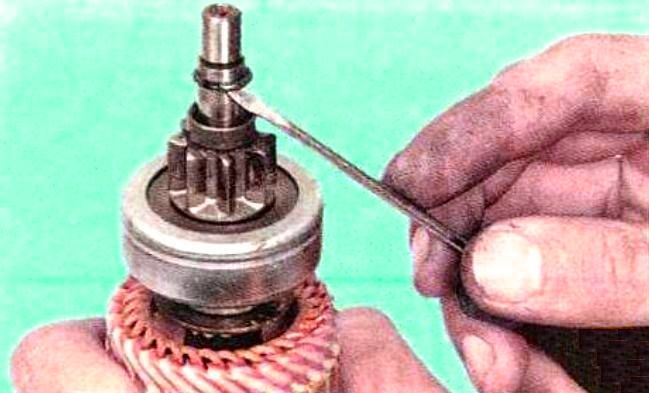 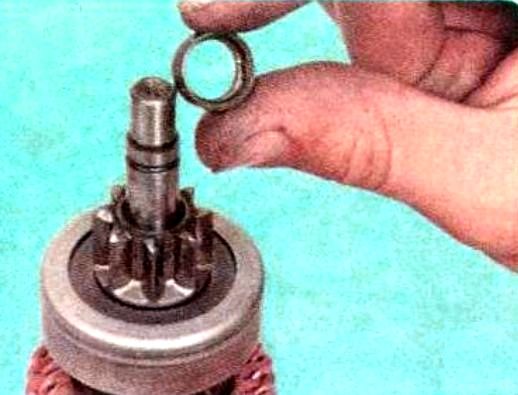 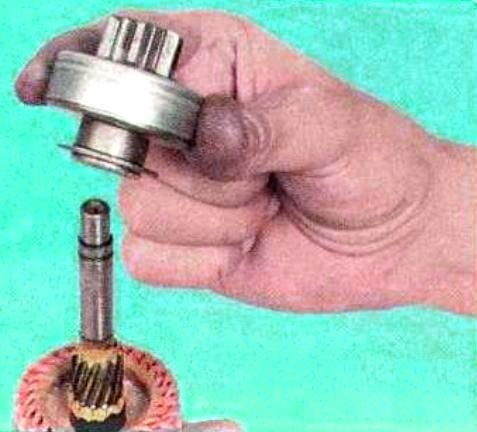 Pry off with a screwdriver and remove the retaining ring

Remove the restrictive ring from the armature shaft 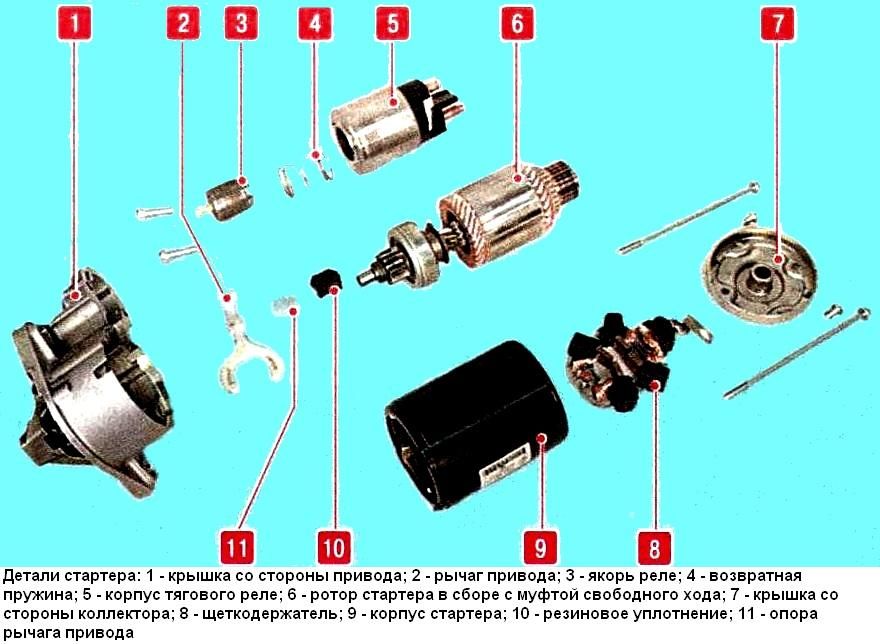 Inspecting the brush holder. Checking the height of the brushes.

If the height of the brushes is less than 7 mm, replace the brush holder assembly. 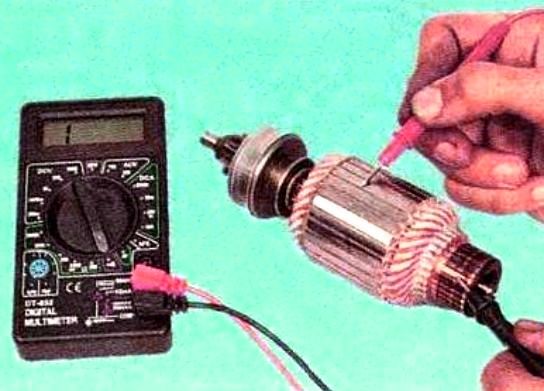 Check the armature winding for a short circuit using an ohmmeter.

Resistance should tend to infinity.

The splines and trunnions of the armature shaft must not be damaged.

The collector must not show signs of burning. We eliminate minor burns with a rag soaked in gasoline and fine emery cloth.

We check whether the armature of the starter traction relay moves easily, whether the contact bolts are closed with a contact plate.

Checking the drive. The teeth of the drive gear should not be heavily clogged.

The gear should turn easily relative to the clutch hub in the direction of rotation of the armature and should not turn in the opposite direction.

The starter drive lever must not show cracks or significant wear on the fork grooves.

Assemble the starter in reverse ordere

Lubricate the splined surface of the shaft with silicon-containing grease

Lubricate the bearings (bushings) in the starter covers with engine oil 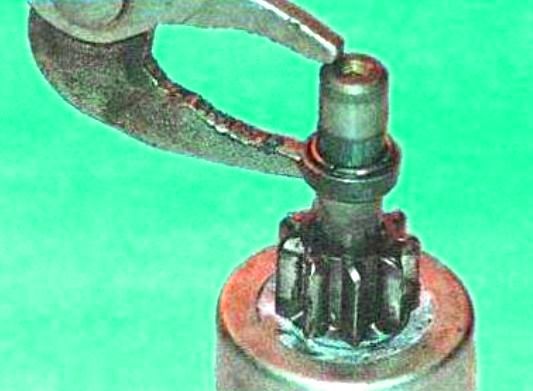 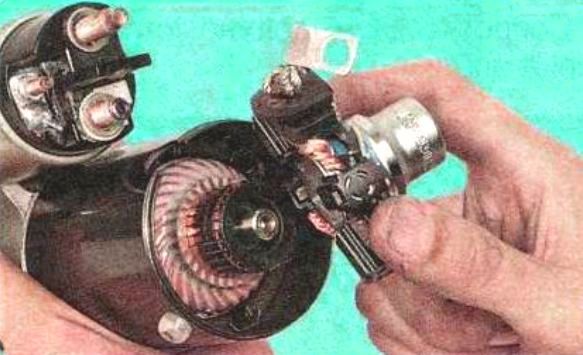 To install the restrictive ring, you can use sliding pliers

Before installing the traction relay, apply a thin layer of sealant to the surface of the relay in contact with the starter cover on the drive side.

Before installing the brush holder on the anchor, spread the brushes and fix them with a suitable mandrel.