Design features of the K4M engine

The K4M engine is gasoline, four-stroke, four-cylinder, inline, sixteen-valve, with an upper arrangement of two camshafts. The order of operation of the cylinders: 1-3-4-2, counting - from the flywheel.

The engine with gearbox and clutch form a power unit - a single unit fixed in the engine compartment on three elastic rubber-metal supports.

The right support is attached to the upper cover of the gas distribution mechanism drive, and the left and rear - to the gearbox crankcase. 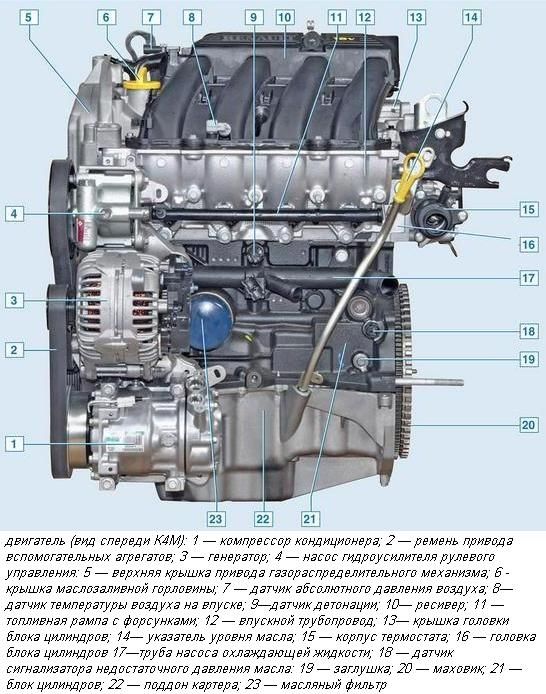 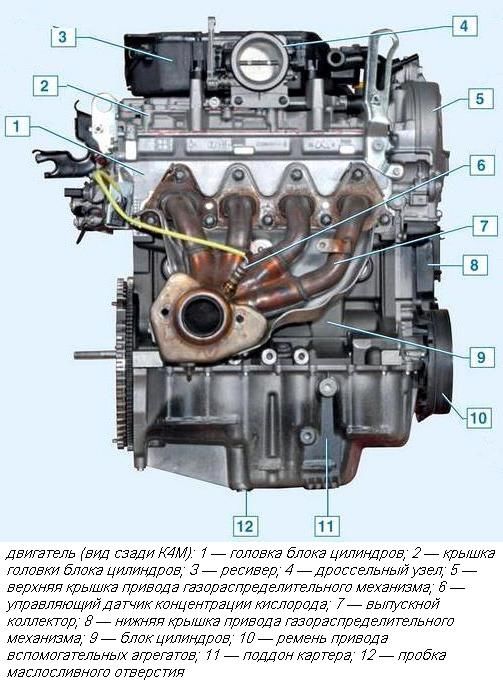 At the rear of the engine are located:

On top - coils and spark plugs; oil filler neck; receiver with sensors of absolute pressure and air temperature at the inlet, throttle assembly with a throttle position sensor.

The engine cylinder block is cast from cast iron, the cylinders are wasted directly in the block.

In the lower part of the cylinder block there are five supports of the main bearings of the crankshaft with removable covers, which are attached to the block with special bolts.

The holes in the cylinder block for bearings are processed with the covers installed, so the covers are not interchangeable and are marked on the outer surface for difference (the covers are counted from the flywheel side).

On the end surfaces of the middle support there are sockets for thrust half-rings that prevent axial movement of the crankshaft.

To cool the pistons during engine operation, their bottoms are washed from below with engine oil through special nozzles pressed into the cylinder block in the zone of the second and fourth supports (on both sides of the supports) of the main bearings.

The inserts of the main and connecting rod bearings of the crankshaft are steel, thin-walled with an anti-friction coating applied to the working surfaces of the inserts.

The shaft is equipped with four counterweights made at the same time with the shaft.

To supply oil from the root necks to the connecting rods, channels are made in the necks and cheeks of the shaft.

At the front end (toe) of the crankshaft are installed: the sprocket of the oil pump drive, the gear pulley of the timing mechanism drive (timing) and the pulley of the auxiliary units drive.

A flywheel is bolted to the crankshaft flange with seven bolts. It is cast from cast iron and has a pressed steel crown for starting the engine with a starter. In addition, a gear ring for the crankshaft position sensor is cut on the flywheel. 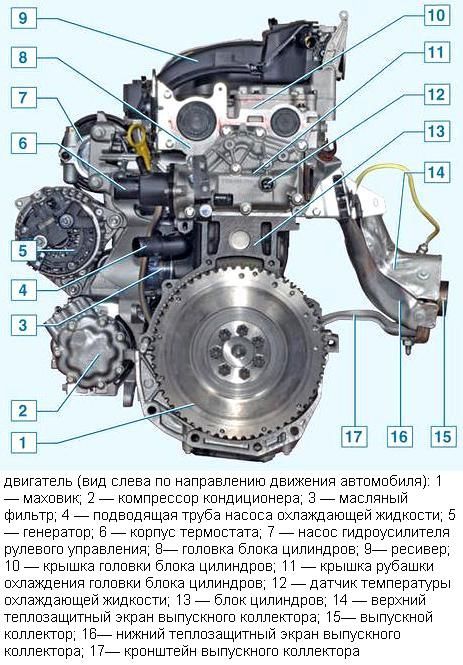 Connecting rods - forged steel, I-section, processed together with the covers.

The covers are attached to the connecting rods with special bolts with nuts.

Piston fingers — steel, tubular section. The finger pressed into the upper head of the connecting rod rotates freely in the piston bosses.

The pistons are made of aluminum alloy. The piston skirt has a complex shape; in the longitudinal section it is barrel-shaped, and in the transverse section it is oval.

In the upper part of the piston there are three grooves for the piston rings. The two upper piston rings are compression, and the lower one is oil—removing. 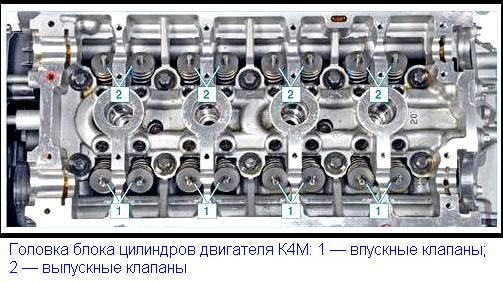 The cylinder head is cast from an aluminum alloy, common to all four cylinders.

The cylinder head is centered on the block by two bushings and fastened with ten screws.

A non-shrinking metal gasket is installed between the block and the head.

On the opposite sides of the cylinder head are the windows of the intake and exhaust channels.

Spark plugs are installed in the center of each combustion chamber. The valves are steel, in the cylinder head are arranged in two rows, V-shaped, with two intake and two exhaust valves for each cylinder.

The intake valve plate is larger than the exhaust one. The valve seats and guide bushings are pressed into the cylinder head.

Oil-reflecting caps are put on top of the valve guide bushings. The valve closes under the action of a spring.

Folded crackers have the shape of a truncated cone on the outside, and are provided with thrust collars on the inside, entering the groove on the valve stem.

Two camshafts are installed in the upper part of the cylinder head.

One shaft drives the intake valves of the gas distribution mechanism, and the other drives the exhaust valves. Eight cams are made on each shaft — an adjacent pair of cams simultaneously controls the valves (inlet or outlet) of each cylinder.

A feature of the camshaft design is that the cams are pressed onto the tubular shaft. 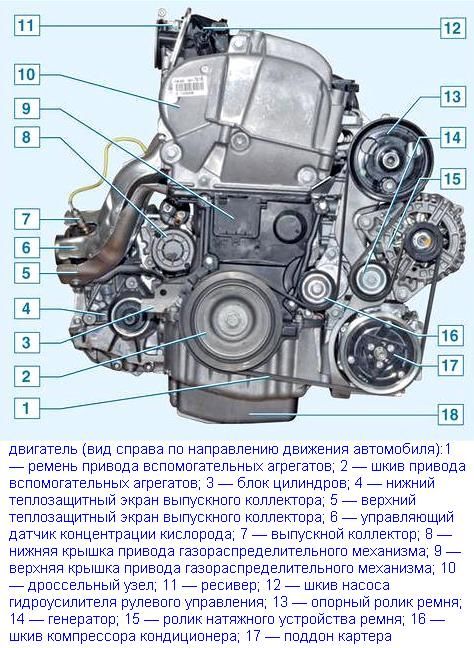 The supports (beds) of the camshafts (six supports for each shaft) are detachable - located in the cylinder head and in the block head cover.

The drive of the camshafts is a toothed belt from the crankshaft pulley. On each camshaft, a thrust flange is made on the side of the gear pulley, which, during assembly, enters the groove of the cylinder head, thereby preventing axial movement of the shaft.

The camshaft pulley is fixed on the shaft not by means of a tight fit, key or pin, but only due to the friction forces arising on the end surfaces of the pulley and shaft when tightening the pulley mounting nut.

The camshaft sock is sealed with an oil seal put on the shaft neck and pressed into the socket formed by the surfaces of the cylinder head and the block head cover. 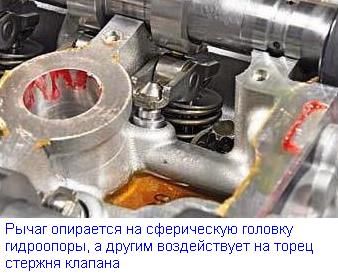 The valves are driven from the camshaft cams through the valve levers.

To increase the service life of the camshaft and valve levers, the cam shaft acts on the lever through a roller rotating on the axis of the lever. 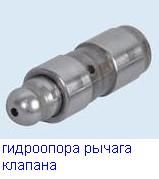 The hydraulic support automatically provides a gas-free contact of the camshaft cam with the valve lever roller, compensating for the wear of the cam, lever, valve stem end face, seat chamfers and valve plates.

Under pressure, oil is supplied to the main and connecting rod bearings of the crankshaft, camshaft bearings and hydraulic supports of valve levers.

Other engine components are lubricated by spraying.

The pressure in the lubrication system is created by a gear oil pump located in the sump pan and attached to the cylinder block. 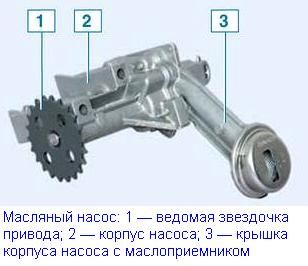 The oil pump is driven by a chain drive from the crankshaft.

The drive sprocket of the pump drive is mounted on the crankshaft under the cylinder block cover. A cylindrical belt is made on the sprocket, along which the front oil seal of the crankshaft works.

The sprocket is mounted on the crankshaft without tension and is not fixed with a key.

When loosening the tightening bolt of the pulley attachment of the drive of auxiliary units, the drive sprocket of the oil pump drive may start to turn on the crankshaft and the oil pressure in the engine will drop. 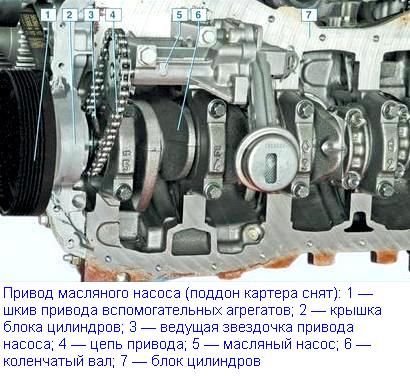 The oil receiver is made in one piece with the cover of the oil pump housing.

The cover is fixed with five screws to the pump housing.

The pressure reducing valve is located in the cover of the pump housing and is kept from falling out by a spring lock.

The oil from the pump passes through the oil filter and enters the main oil line of the cylinder block. The oil filter is full—flow, non-removable.

From the main line, oil flows to the main bearings of the crankshaft, piston cooling nozzles and further (through channels in the crankshaft) - to the connecting rod shaft bearings.

From the cylinder head, oil flows through vertical channels into the sump of the engine crankcase.

Gases that have penetrated from the combustion chambers of the cylinders through the piston rings into the crankcase of the engine enter through the channels in the block and cylinder head into the head cover.

After passing the oil separator located in the cylinder head cover, the crankcase gases are cleaned of oil particles and then enter the engine cylinders through the air filter housing, throttle assembly, receiver and intake pipe.

The control, power, cooling and exhaust systems are described in the relevant articles