Features of the Hyundai Solaris engine from 2011 release

Four-cylinder four-stroke engines DOHC CWT 1.4 and 1.6 liters have been installed on Hyundai Solaris cars since 2011.

Engines differ only in crankshaft radius and cylinder block height. 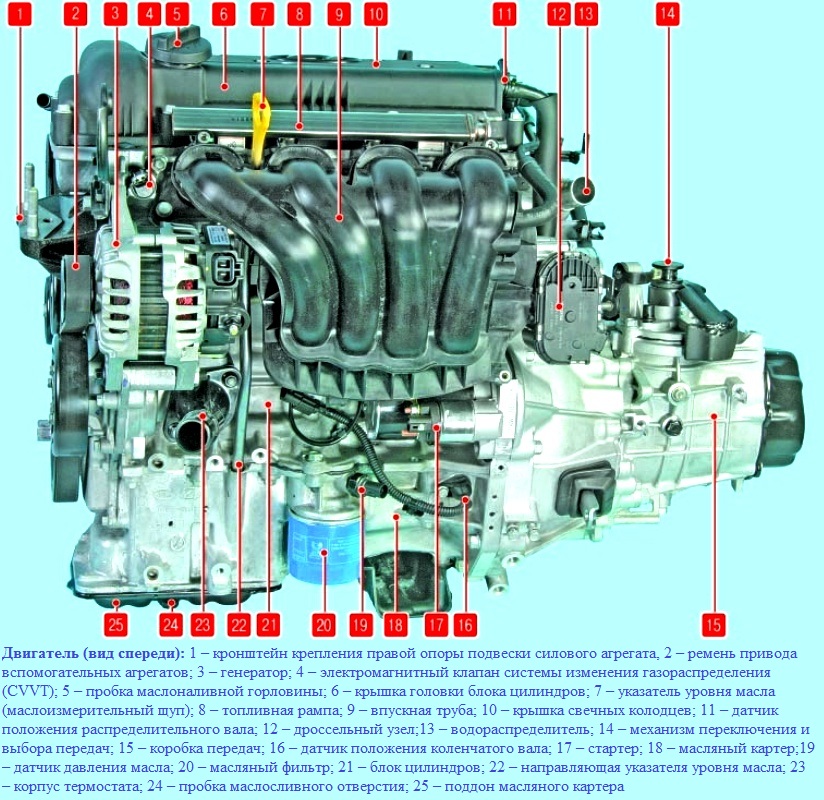 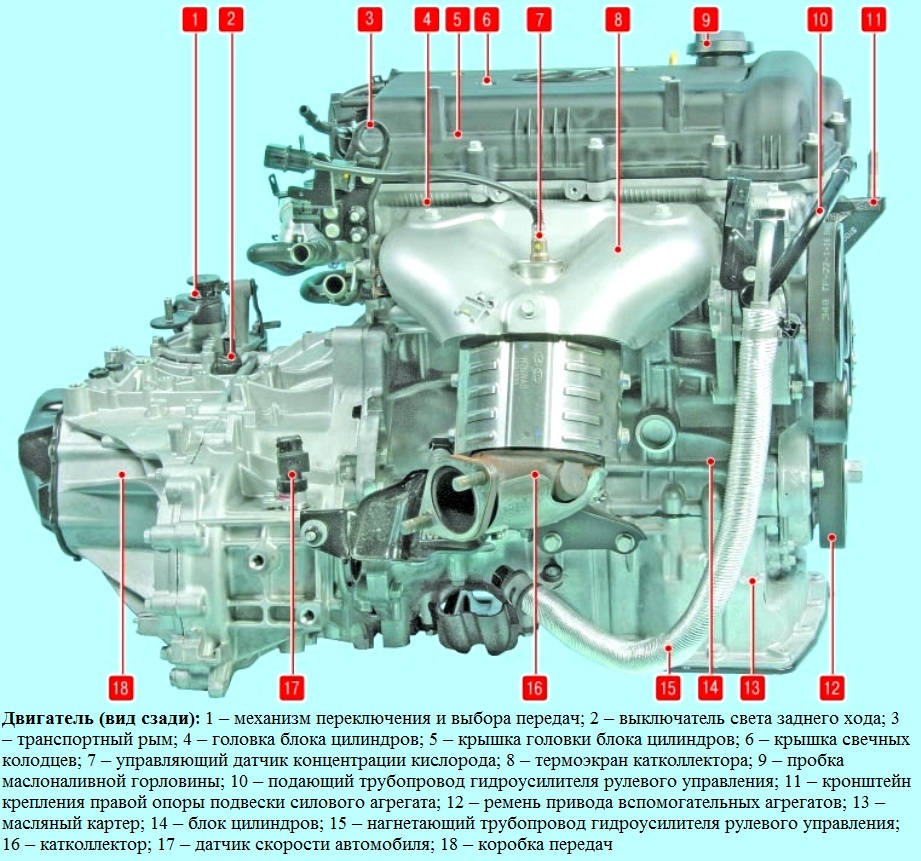 The camshafts are driven by a chain.

This system allows you to set the optimal valve timing for each moment of engine operation. The result is increased power, less toxicity and fuel economy.

The phase control mechanism is a hydraulic mechanism that is connected to the engine oil line.

Oil from the lubrication system enters the gas distribution mechanism through channels. 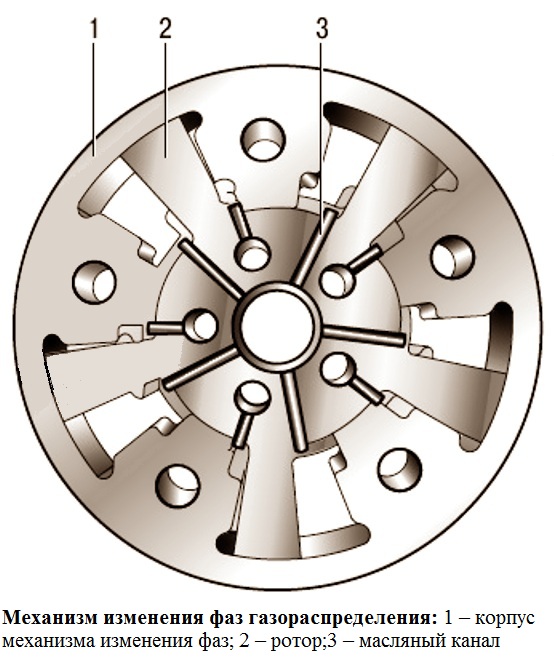 Rotor 2 (Fig. 3) turns the camshaft at the command of the electronic engine control unit.

On the camshaft journal there is a sensor position setting ring. 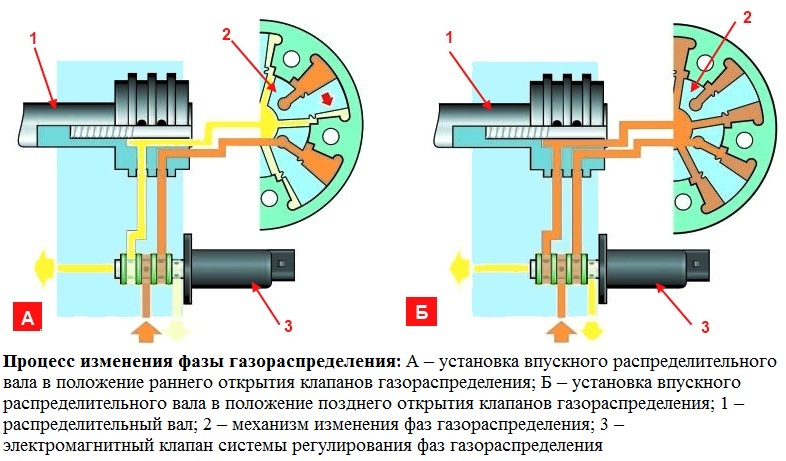 The use of the phase control mechanism ensures a smooth change in the angle of installation of the intake camshaft in the position of early and late opening of the gas distribution valves.

In accordance with this command, the spool of the solenoid valve is moved, for example, in the direction of more advanced opening of the intake valves.

In this case, the oil supplied under pressure enters through the channel in the timing case into the case of the phase regulator mechanism and causes the camshaft to rotate in the required direction. 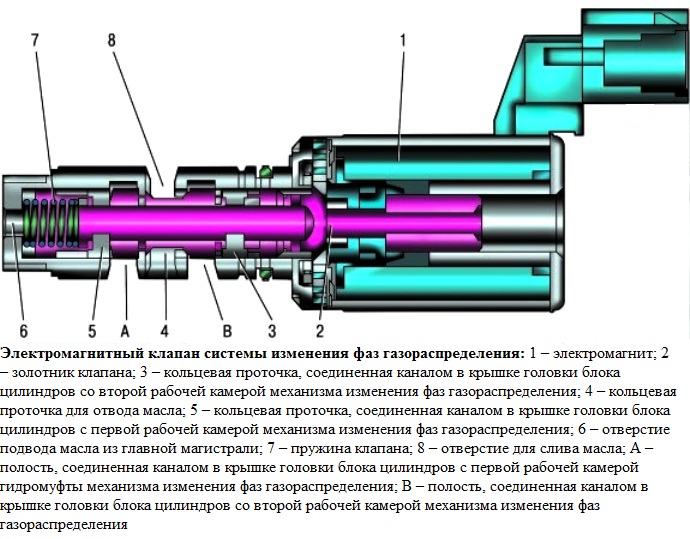 When the spool is moved in the direction corresponding to the earlier opening of the valves, the channel for their later opening is automatically connected to the drain channel.

If the camshaft has turned to the required angle, the solenoid valve spool (Fig. 5) is set to a position at the command of the control unit, in which the oil is maintained under pressure on both sides of each of the clutch rotor blades.

If it is required to turn the camshaft towards a later opening of the valves, the control process is carried out with oil supply in the opposite direction.

In this regard, when performing maintenance or repair of the variable valve timing system, only the replacement of the complete system elements is allowed.

The cylinder head of the engines is made of aluminum alloy according to the transverse cylinder scavenging pattern (inlet and outlet channels are located on opposite sides of the head).

Saddles and valve guides are pressed into the head.

The engine block is a single casting of a special aluminum alloy that forms the cylinders, the cooling jacket, the upper part of the crankcase and the five crankshaft bearings.

Five main bearing beds are made in the lower part of the block.

The cylinder block has special lugs, flanges and holes for attaching parts, components and assemblies, as well as channels of the main oil line.

The crankshaft rotates in main bearings with thin-walled steel liners with an anti-friction layer.

Collench The motor shaft is fixed from axial movements by two half rings installed in the grooves of the bed of the middle main bearing.

Flywheel is cast iron, mounted on the rear end of the crankshaft through a mounting sleeve and secured with six bolts. A toothed rim is pressed onto the flywheel for starting the engine with a starter.

On vehicles with an automatic transmission, a torque converter drive disc is installed instead of a flywheel.

Pistons are made of aluminum alloy. On the cylindrical surface of the piston head, annular grooves are made for the oil scraper and two compression rings.

Pistons are additionally cooled by oil supplied through a hole in the upper head of the connecting rod and sprayed onto the piston bottom.

The piston pins are installed in the piston bosses with a gap and are pressed with an interference fit into the upper heads of the connecting rods, which are connected with their lower heads to the connecting rod journals of the crankshaft through thin-walled liners, the design of which is similar to the main ones.

Crankcase ventilation system of a closed type does not communicate directly with the atmosphere, therefore, simultaneously with the exhaust of gases, a vacuum is formed in the crankcase under all engine operating modes, which increases the reliability of various engine seals and reduces the emission of toxic substances into the atmosphere.

The system consists of two branches, large and small.

When the engine is idling and in low load modes, when the vacuum in the intake pipe is high, crankcase gases are sucked in by the intake pipe through the crankcase ventilation valve installed on the cylinder head cover.

The valve opens depending on the vacuum in the intake pipe and thus regulates the flow of crankcase gases.

In full load modes, when the throttle is open at a large angle, the vacuum in the intake pipe decreases, and in the air supply hose increases, crankcase gases through the large branch hose connected to the fitting on the head cover, mainly enter the air supply hose, and then through the throttle assembly - into the intake pipe and into the engine cylinders.

Engine cooling system sealed, with expansion tank, consists of a cooling jacket, made in casting and surrounding the cylinders in the block, combustion chambers and gas channels in the cylinder head.

The forced circulation of the coolant is provided by a centrifugal water pump driven by a crankshaft poly V-belt, which simultaneously drives the generator.

To maintain the normal operating temperature of the coolant, a thermostat is installed in the cooling system, which blocks a large circle of the system when the engine is cold and the coolant temperature is low.

The ignition system does not require maintenance and adjustment during operation.

The power unit (engine with gearbox, clutch and final drive) is mounted on three supports with elastic rubber elements: two upper side supports (right and left) that take the bulk of the power unit, and a rear one that compensates for the torque from the transmission and load that occur when starting the car, accelerating and braking.

Cause of failure Remedy

Air leakage through the crankcase ventilation hose and the hose connecting the intake pipe to the vacuum brake booster - Tighten the fastening clamps, replace damaged hoses

The engine does not develop full power and there is no throttle response:

Cracks, pores in the walls of the oil channels of the cylinder block or clogging of the oil lines - Replace the block or repair

Detected when the throttle is suddenly opened at idle.

Excessive axial clearance of the crankshaft causes a sharper knock with uneven intervals, especially noticeable with a smooth increase and decrease in the crankshaft speed

Increased clearance between the thrust flanges of the middle main bearing shells and the crankshaft - Replace the half rings with new ones, check the clearance

It can be heard when the engine is idling when the throttle is suddenly opened.

The knock is usually unvoiced, muffled, caused by the beating of the piston in the cylinder.

It is best heard at low engine speeds and under load

Knocking when the engine is warm at idle

Breakage or wear of piston - Replace piston or rings

Insufficient amount of fluid in the cooling system - Add coolant

Thermostat is defective - Replace the thermostat

With a certain skill and care, many malfunctions of the engine and its systems can be quite accurately determined by the color of the smoke coming out of the exhaust pipe.

Blue smoke indicates that oil has entered the combustion chambers, and constant smoke is a sign of severe wear of the parts of the cylinder-piston group.

The appearance of smoke during regassing, after a long scrolling by the starter, after a long idling or immediately after engine braking, as a rule, indicates wear on the valve stem seals.

Black smoke is caused by too rich a mixture due to a malfunction of the engine control system or injectors.

Blue or thick white smoke with moisture (especially after the engine has overheated) means that coolant has entered the combustion chamber through a damaged cylinder head gasket.

If this gasket is severely damaged, the liquid sometimes enters the oil sump, the oil level rises sharply, and the oil itself turns into a cloudy whitish emulsion. White smoke (steam) when the engine is cold in wet or cold weather is normal.

It is quite common to see a car parked in the middle of a city traffic jam with its hood open, emitting puffs of steam.

It is better, of course, not to allow this, often looking at the temperature gauge. But no one is immune from the fact that the thermostat, electric fans may suddenly fail, or coolant may simply leak.

If you miss the moment of overheating, do not panic and do not aggravate the situation.

Overheating is not as bad as its possible consequences. Never turn off the engine right away - it will get heat stroke and possibly cool down and refuse to start at all.

Having stopped, let it idle, then the system will continue to circulate fluid. Turn on the heater to maximum power and open the hood.

If possible, pour cold water over the radiator. Stop the engine only when the temperature drops.

But never immediately open the radiator cap: on an overheated engine, a geyser from under the open cap is provided. Take your time, let things cool down, and you"ll save the machine"s health and your own health.

Almost all instructions for the car contain a recommendation to depress the clutch when starting the engine.

This recommendation is justified only in case of starting in severe frost, so as not to waste battery energy on turning the shafts and gears of the gearbox in thickened oil.

In other cases, this measure is aimed only at ensuring that the car does not start if the gear is switched on due to forgetfulness.

This technique is harmful to the engine, since when the clutch is depressed, a significant force is transmitted through it to the thrust bearing of the crankshaft, and during start-up (especially cold), lubrication is not supplied to it for a long time.

The bearing wears out quickly, the crankshaft gets axial play, and starting off begins to be accompanied by strong vibration.

In order not to spoil the engine, make it a habit to check the position of the gear lever before starting and start the engine with the handbrake applied, without depressing the clutch unless absolutely necessary.