The VAZ-2112 engine is gasoline, four-stroke, four-cylinder, inline, with a transverse arrangement, sixteen-valve, with two camshafts.

The order of operation of the cylinders: 1-3- 4-2, counting - from the crankshaft pulley.

The power system is a phased distributed injection.

Most engines are equipped with an exhaust gas neutralizer.

The engine with gearbox and clutch form a power unit mounted in the engine compartment on four elastic rubber-metal supports.

The front and rear supports are the same, representing rods.

On the right side of the engine (in the course of the car) are located: the drives of the camshafts and the coolant pump (toothed belt) and the generator (V-belt).

On the left are: thermostat, coolant temperature sensors, oil pressure sensor, starter (on the clutch housing).

On top (under the plastic cover) there are a receiver, candles (in guide pipes sealed with rubber rings) and high-voltage wires. 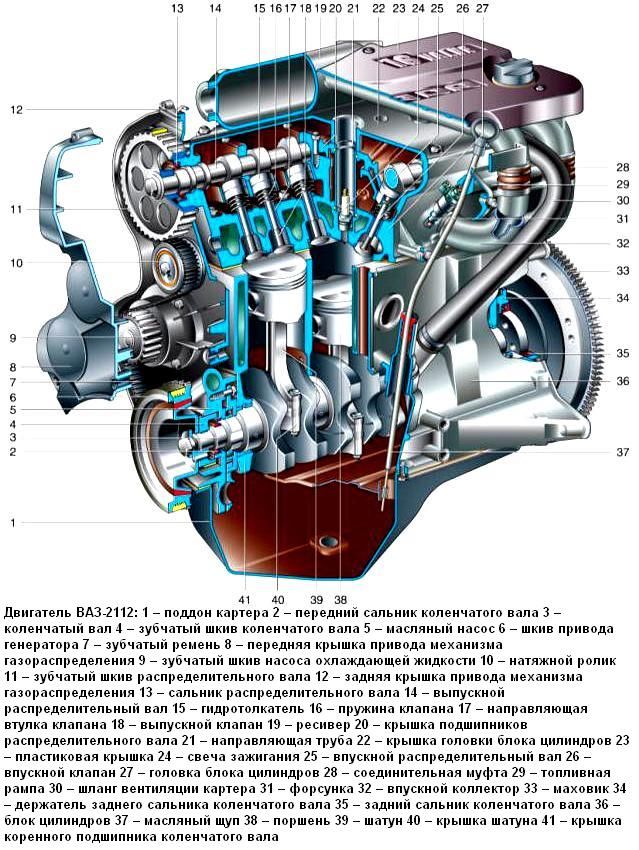 Another difference is due to the more intense thermal mode of the 2112 engine compared to the 2110 and 2111 engines.

To cool the pistons during engine operation, their bottoms are washed from below with oil through special nozzles pressed into the second, third, fourth and fifth supports of the main bearings.

The cylinders are wasted directly in the block. The nominal diameter of 82 mm can be increased by 0.4 or 0.8 mm during repair.

The maximum allowable wear of the cylinder is 0.15 mm per diameter.

In the lower part of the cylinder block there are five main bearing supports with removable covers, which are attached to the block with special bolts.

The covers are non-interchangeable (the bearing holes are processed assembled with the covers) and are marked to distinguish the risks on the outer surface.

In the middle support there are sockets for thrust half-rings that prevent axial movement of the crankshaft.

A steel–aluminum half-ring is placed in front (on the side of the crankshaft pulley), a metal-ceramic one is placed in the back.

The rings are manufactured with a nominal and increased by 0.127 mm thickness.

If the axial clearance of the crankshaft exceeds 0.35 mm, one or both half-rings change (the nominal clearance is 0.06-0.26 mm).

The inserts of the main and connecting rod bearings are thin–walled steel-aluminum.

The upper root liners of the first, second, fourth and fifth supports installed in the cylinder block are provided with a groove on the inner surface.

The lower root liners, the upper liner of the third support and the connecting rod liners have no grooves. 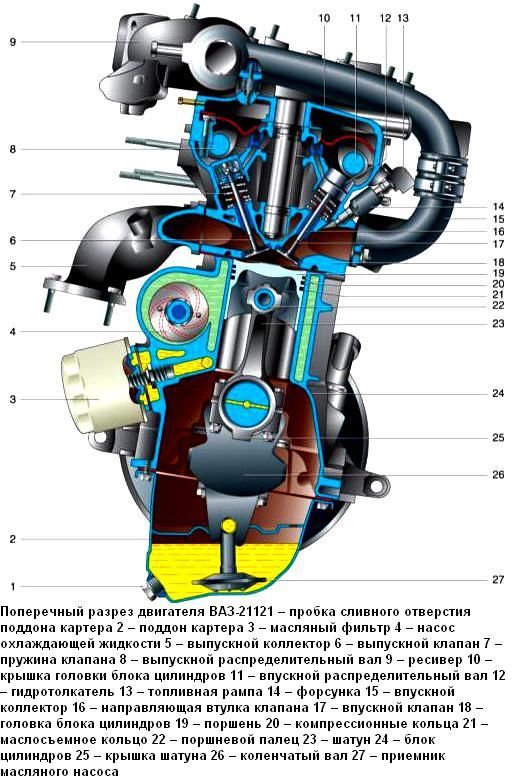 The crankshaft is made of high-strength cast iron.

It has five main and four connecting rod necks and is equipped with eight counterweights cast at the same time with the shaft.

Therefore, it is not allowed to install the crankshaft from the 2110 and 2111 engines into the 2112 engine.

To supply oil from the root necks to the connecting rods, channels are drilled in the crankshaft, the outlet holes of which are closed with pressed plugs.

At the front end of the crankshaft, a gear pulley of the camshaft drive is mounted on a segment key, a generator drive pulley is attached to it, which is also a damper for torsional vibrations of the crankshaft.

On the gear ring of the pulley, two teeth out of 60 are missing – the depressions serve for the operation of the crankshaft position sensor.

To the rear end of the crankshaft, six self-locking bolts through a common washer are attached a flywheel (index 2110), cast from cast iron, with a pressed steel gear ring, which serves as a starter for starting the engine.

The cone-shaped hole near the crown of the flywheel should be located opposite the connecting rod neck of the fourth cylinder (this is necessary to determine the TDC after the engine assembly).

Connecting rods - steel, I-section, processed together with the covers.

Connecting rods by the diameter of the steel sleeve pressed into the upper head are divided into three classes with a step of 0.004 mm.

The piston pin is steel, tubular section, floating type (rotates freely in the upper head of the connecting rod and in the piston bosses).

From falling out, it is fixed by two locking spring rings, which are located in the grooves of the piston bosses.

The piston is made of aluminum alloy. The piston skirt is conical in longitudinal section, oval in transverse section.

In the upper part of the piston there are three grooves for the piston rings.

The groove of the oil-removing ring has drilling bosses, through which the oil collected by the ring from the cylinder walls enters the piston pin.

The hole for the piston pin is offset from the diametral plane of the piston by 1 mm.

When installing the piston, it is necessary to follow the arrow stamped on the bottom (it should be directed towards the crankshaft pulley).

Pistons by outer diameter (measured in a plane perpendicular to the piston pin, at a distance of 51.5 mm from the bottom of the piston), like cylinders, are divided into five classes (marking – on the bottom).

Pistons of classes A, C and E (nominal and repair sizes) are on sale: the calculated gap between them is 0.025-0.045 mm, and the maximum allowable gap during wear is 0.15 mm.

It is not recommended to install a new piston in a worn cylinder without boring it: the groove under the upper piston ring in the new piston may be slightly higher than in the old one, and the ring may break on the "step" formed in the upper part of the cylinder during its wear.

The piston and the pin must be of the same class. Pistons of one engine are selected by weight (the spread should not exceed 5 g) – this is done to reduce the imbalance of the crank mechanism.

The upper two piston rings are compression rings that prevent the breakthrough of gases into the crankcase of the engine. They also contribute to the removal of heat from the piston to the cylinder. The lower ring is oil–removable.

The cylinder head - common to all four cylinders - is made of aluminum alloy.

It is centered on the block with two bushings and fastened with ten screws.

A non-shrink metal-reinforced gasket is installed between the block and the head (their surfaces must be dry) (its reuse is not allowed).

The order and tightening torque of the block head screws are specified in the appendix. In the upper part of the cylinder head there are camshaft supports – five on each side of the head.

The camshafts are cast, cast iron, five-support, each with eight cams (a pair of adjacent cams simultaneously opens two valves in the cylinder).

The camshafts are driven by a toothed belt from the crankshaft.

The seats (made of cermet) and the valve guide bushings (brass) are pressed into the cylinder head.

The holes in the bushings are processed after pressing. The inner diameter of the bushings has been reduced, compared to engines 2110 and 2111, from 8 to 7 mm.

Repair bushings with an outer diameter of 12.279-12.290 mm (increased by 0.2 mm compared to the nominal one) are also supplied in the spare parts kit.

Grooves similar to threads are made on the inner surface of the lubrication bushings: in the bushings of the intake valves – for the entire length, in the exhaust - up to half the length of the hole. Oil-reflecting caps made of oil-resistant rubber are put on top of the bushings.

Valves - steel, exhaust - with a head made of heat-resistant steel with a fused chamfer.

The area of the intake valve plate is larger than the exhaust one.

The valves are arranged in two rows, V-shaped.

They are driven from camshafts via hydraulic pushers.

The cam axis is offset relative to the axis of the hydraulic pusher by 1 mm.

Due to this, when the engine is running, the pusher body rotates around its axis, which contributes to its more uniform wear.

Hydraulic pushers choose the gap between the cam and the pusher body when the engine is running, which reduces the noise of the gas distribution mechanism, and also eliminates its maintenance (adjustment of the gap is not required).

For the operation of hydraulic pushers, a constant supply of oil under pressure is required.

To do this, there is a channel with a check ball valve in the cylinder head (it prevents oil from draining from the channels after the engine stops), as well as channels on the lower plane of the bearing housing (they also supply oil to the camshaft necks).

Hydraulic pushers are very sensitive to the quality of the oil and its purity.

In the presence of mechanical impurities in the oil, a rapid failure of the plunger pair of the hydraulic pusher is possible, which is accompanied by increased noise in the gas distribution mechanism and intensive wear of the camshaft cams.

A faulty hydraulic pusher cannot be repaired, it should be replaced. The valve closes under the action of a single spring. The lower end rests on the washer, and the upper end rests on a plate held by two breadcrumbs.

The folded crackers have the shape of a truncated cone on the outside, and on the inner surface there are three thrust collars entering the grooves on the valve stem. Engine lubrication is combined.

By spraying, the oil is supplied to the cylinder walls (further to the piston rings and fingers), to the bottom of the pistons, to a pair of "cam camshaft - pusher" and valve rods. The remaining nodes are lubricated by gravity.

The oil pump - with internal gearing gears and a reduction valve - is mounted on the front wall of the cylinder block.

The drive gear is mounted on two pins at the front end of the crankshaft.

The maximum diameter of the socket for the driven (large) gear during wear should not exceed 75.10 mm, the minimum width of the segment on the housing separating the driving and driven gears is 3.40 mm.

The axial clearance for the driving gear should not exceed 0.12 mm, for the driven gear - 0.15 mm.

An oil receiver is bolted to the cover of the second main bearing and the pump housing.

The oil filter is full-flow, non-removable, equipped with bypass and anti-drainage valves.

The crankcase ventilation system is closed, forced, by suction of gases through an oil separator located in the cylinder head cover.