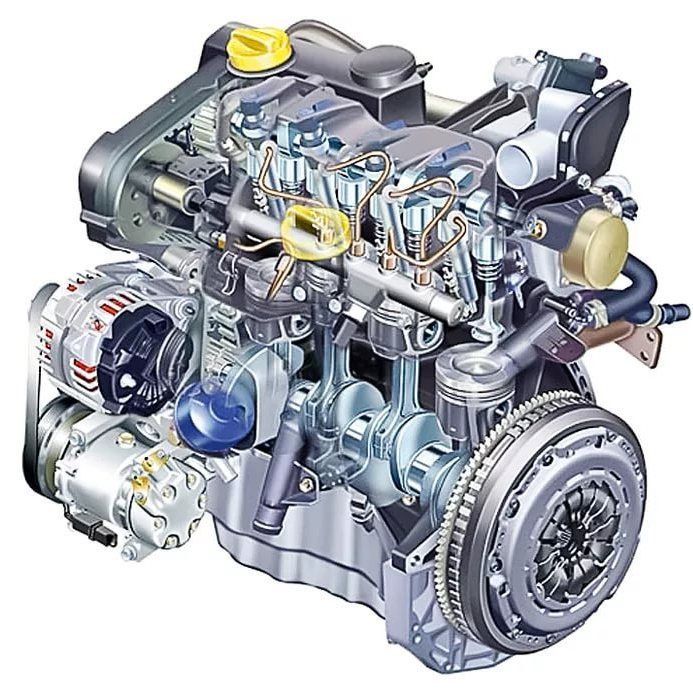 The cylinder head of the diesel engine is made of aluminum alloy. 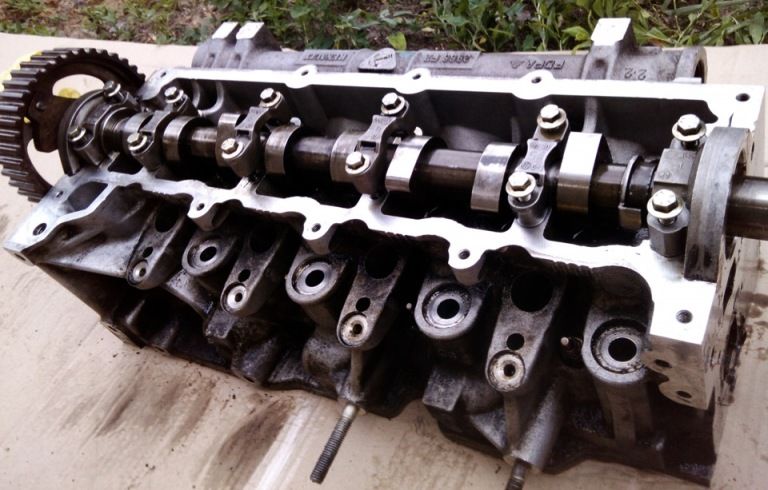 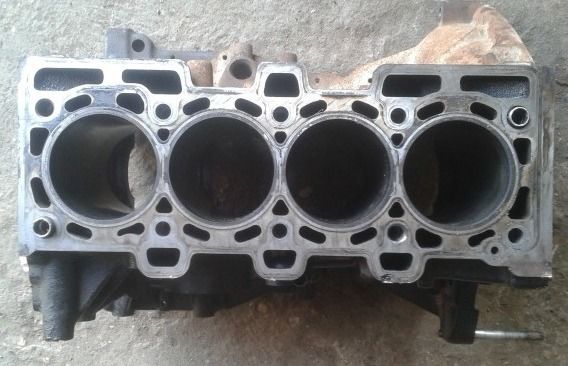 The cylinder head gasket is made of metal, which makes it more resistant to high temperature and pressure.

The engine block is cast from gray cast iron with cylinder liners already formed. Crankshaft bearings have cast iron covers that are part of the block, including bolts

Liners are inserted in both parts of the bearings. Liners have tongue locks and lubrication grooves around the center circle.

The engine camshaft is installed in the bearing bed, made in the head body, and is fixed against axial movement by thrust flanges.

The axial movement of the crankshaft is limited by two half rings installed in the grooves of the middle main bearing bed. The oil passages to the bearings are run transversely (diagonally).

The flywheel, cast from cast iron, is mounted on the rear end of the crankshaft and is secured by six bolts.

A toothed rim is pressed onto the flywheel for starting the engine with a starter.

The pistons are made of aluminum castings.

A recess with a guiding rib is made in the piston bottom on the combustion chamber side, which ensures the swirling movement of the intake air and, as a result, very good mixture formation

A special cooling circuit ensures that the piston is cooled during the exhaust stroke. Friction in the piston group is reduced by the graphite coating of the piston skirt.

Piston pins are installed in the piston bosses with a gap and are pressed with an interference fit into the upper connecting rod heads, which by their lower heads are connected to the crankshaft connecting rod journals through thin-walled liners similar in design to the main ones.

Due to the high maximum cycle pressure, the piston pin diameter is increased.

Combined lubrication system. oil flow. Oil from the oil sump is sucked in by the oil pump, passes through the oil filter and is supplied under pressure to the engine

The aluminum alloy crankcase is integrated with the front and rear covers and together with them is attached to the engine block. 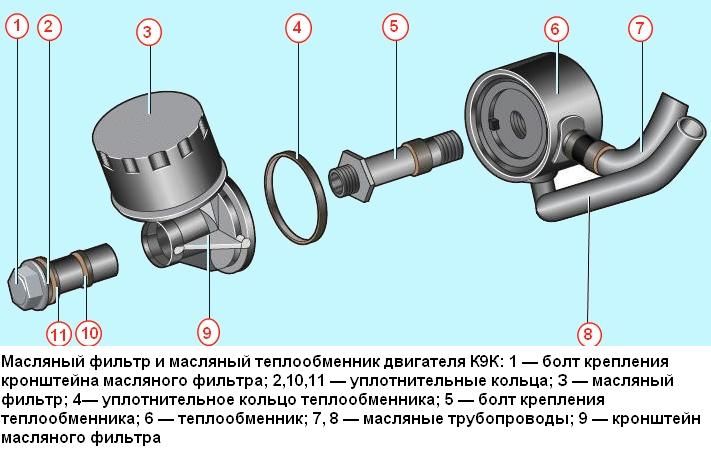 An oil heat exchanger 6 and an oil filter 3 are also embedded in the lubrication system (Fig. 5)

An overpressure valve is also mounted in the oil filter housing, allowing the oil to flow back. The oil filter is equipped with a replaceable paper filter element.

The engine cooling system is sealed, with an expansion tank, consists of a cooling jacket made in casting and surrounding the cylinders in the block, combustion chambers and gas channels in the cylinder head

to maintain a normal operating temperature of the coolant, a thermostat is installed in the cooling system, which closes the large circle of the system when the engine is cold and the coolant temperature is low. 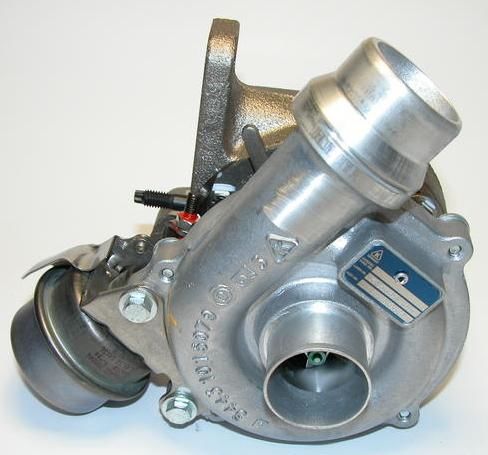 Turbocharging and exhaust gas recirculation system. The exhaust manifold is attached to the turbocharger flange with nuts

The turbocharger is used to increase the air pressure by means of a turbine, which is driven by the exhaust gases.

The turbocharging system is supplemented by an exhaust gas recirculation system.

The amount of exhaust gases supplied to the system is controlled by an exhaust gas recirculation solenoid valve, the cone-shaped pusher of which changes the cross-section of the bypass opening at different valve positions.

Supply system. Clean air is sucked into the cylinders of a diesel engine when the piston moves down

During the compression stroke, the pressure in the cylinder rises sharply, with the temperature in it becoming higher than the ignition temperature of diesel fuel

If the piston is in front of TDC, then diesel fuel is injected into the cylinder heated to a temperature of + 700-900˚C, which ignites spontaneously, so spark plugs are not required.

However, when starting the engine after a long idle period (cold), especially if the air temperature is low, simple compression is often not enough to ignite the combustible mixture. For this case, glow plugs are installed in the combustion chamber, which are located so that the jet of fuel from the nozzle atomizer hits the glowing tip of the plug and ignites. 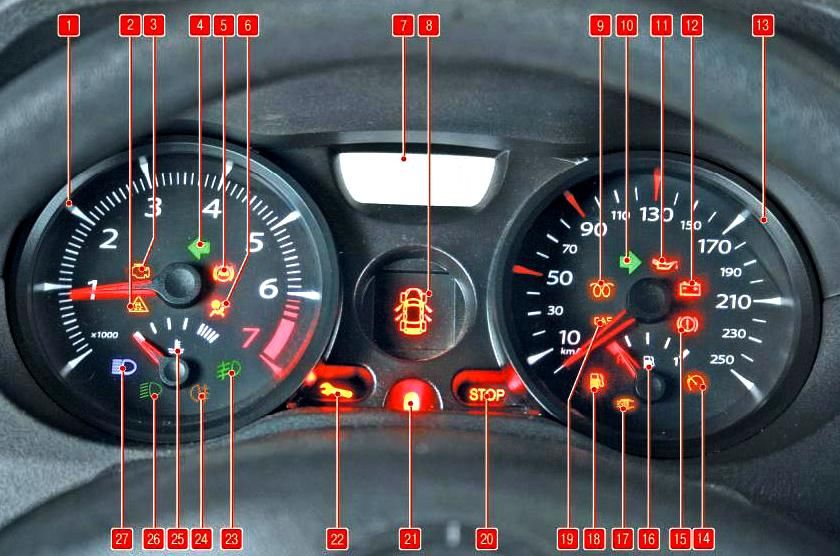 The glow plugs are automatically switched on at the moment immediately preceding the switching on of the starter. In this case, the indicator 9 in the instrument cluster turns on (see Fig. 7), and the glow plugs begin to heat up to a high temperature.

The main purpose of spark plug heating is to reliably ignite the fuel injected into the cylinder.

After the spark plug is heated to the required temperature (it usually takes a few seconds), the indicator goes out, and the engine can be started

Typically, the warning light goes out the faster the higher the engine temperature. Immediately before starting the engine (or most often shortly after), the glow plugs are switched off

In most modern engines, they can continue to run for up to several minutes after starting to reduce harmful emissions into the atmosphere when the engine is cold, as well as to stabilize the combustion process in an engine that is not yet fully warmed up.

Then the supply of current to the candles is stopped.

Thus, the start of the diesel engine and its further operation directly depend on the correct operation of the glow plugs.

Fuel is supplied by a high pressure fuel pump (HPF) directly from the fuel tank. In the high-pressure fuel pump, the fuel is compressed before injection, then supplied to the engine cylinders in the order of priority of their operation

At the same time, the fuel pump regulator measures fuel depending on the position of the gas pedal.

Due to the shape of the prechamber (vortex chamber), the incoming air receives a certain swirl during compression, as a result of which the fuel is optimally mixed with the air.

Before the fuel enters the injection pump, it passes through the fuel filter, in which it is cleaned of impurities and water. That is why it is important to replace the filter in a timely manner, according to the regulations.

The high-pressure fuel pump does not require maintenance. All moving parts of the pump are lubricated with diesel fuel. The injection pump is driven from the crankshaft pulley by a toothed belt.

Since the diesel engine self-ignites the combustible mixture, the ignition system is not required, and a solenoid valve is installed in the injection pump

To stop the engine, the voltage supply to the solenoid valve is interrupted and the valve closes the fuel line, thereby stopping the fuel supply and the engine

When the starter is turned on, voltage is applied to the solenoid valve and it opens the fuel line.

Nuts of the studs securing the manifold to the exhaust manifold 2.6