Replacement of oil-removing caps is carried out when repairing the cylinder head, as well as when the caps wear out.

A sign of wear of the oil-removing caps is an increased oil consumption, as well as the presence of blue smoke from the exhaust pipe after starting the engine and when braking the engine after a long movement under load.

An indirect sign is also the greasing of the spark plug electrodes.

To perform the work, you need the tools that are necessary to remove the cylinder head cover, a 12-pin wrench, tweezers or a magnetized screwdriver as well as:

Or you can use an inertial oil cap puller.

We are preparing the car for the job. Disconnect the negative terminal of the battery.

On the K7J K7M engine

In this position, the valves of the first and fourth cylinders can be opened without the risk of dropping the valves into the cylinder

To install the piston of the 1st cylinder in the TDC position of the compression stroke, removal of the upper cover of the timing belt drive mechanism is required (to gain access to the mounting marks on the camshaft pulley and on the block head), which entails time-consuming preliminary operations to remove the right suspension support of the power unit.

With an accuracy sufficient to install the pistons of the 1st and 4th cylinders in the TDC position when replacing the oil caps, the camshaft can be installed in the desired position by controlling it visually. 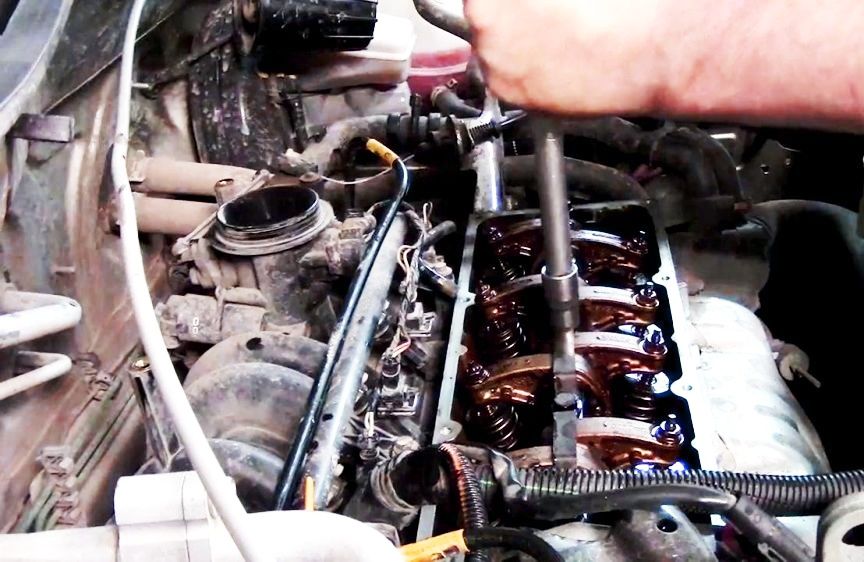 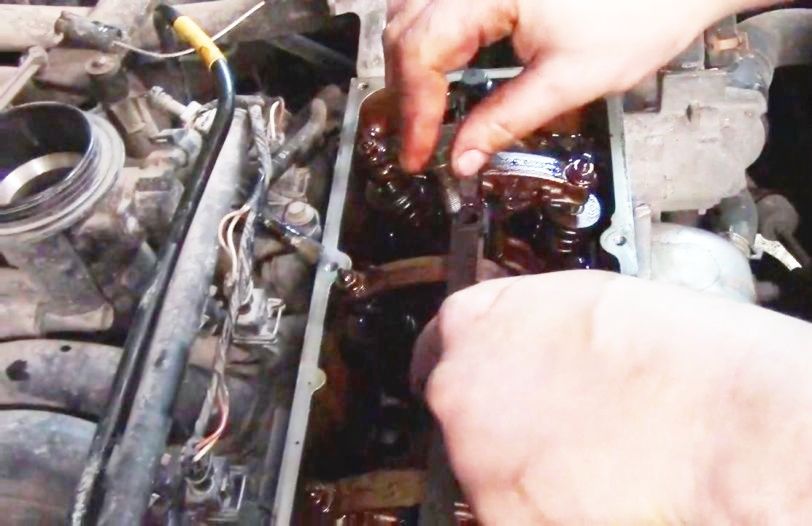 Remove the bolts from the holes of the head

Bolts differ in the shape of their heads, you need to remember their position and install them in their places 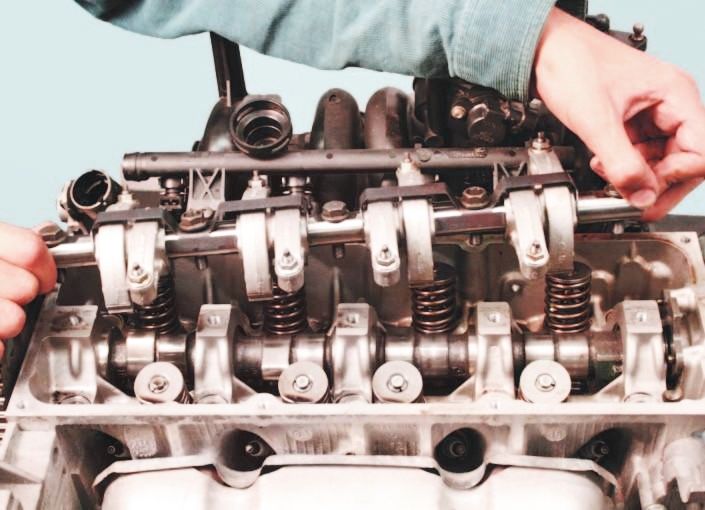 We remove the axle assembly with rocker arms

If we do not replace the rocker arms or the camshaft, then it is not necessary to remove the rocker arms from the axis in order to install them in their places during assembly. Thus, the valve clearances will not differ much. 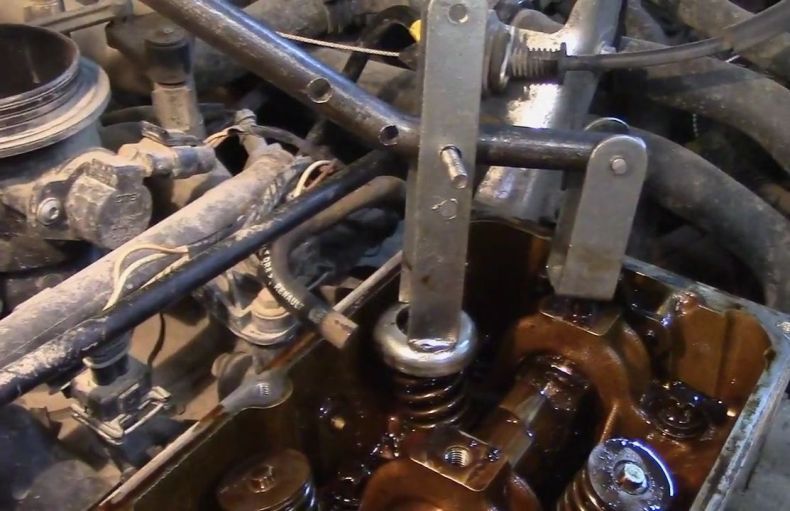 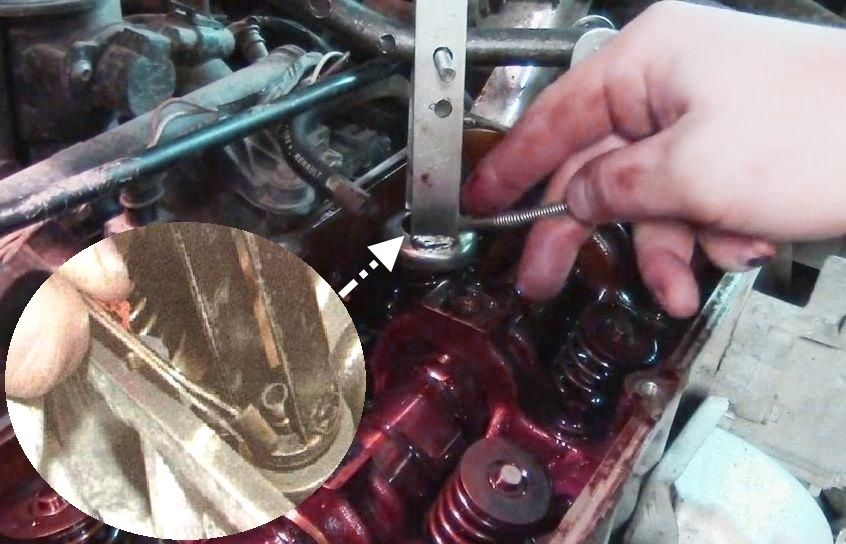 We install a device for compressing valve springs by screwing into one of the holes of the block head the bolt for fixing the axis of the rocker arm of the valves and hooking the device to this bolt.

Squeeze the valve spring and remove two crackers from the spring plate using tweezers or a magnet.

We remove the device. 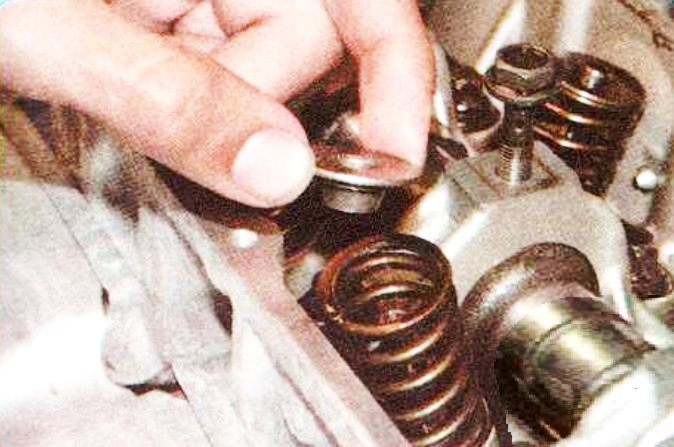 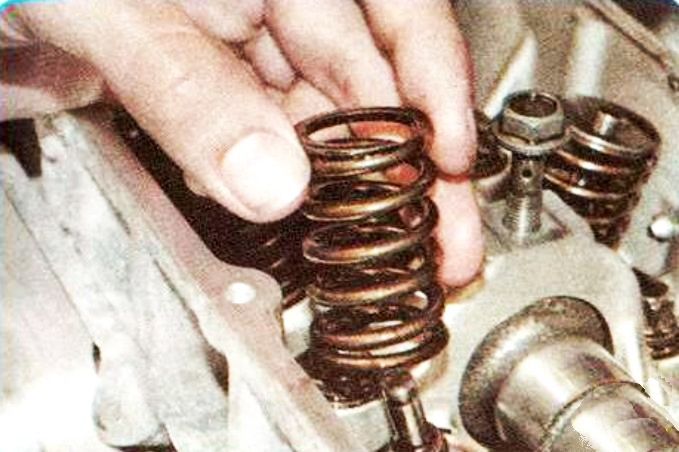 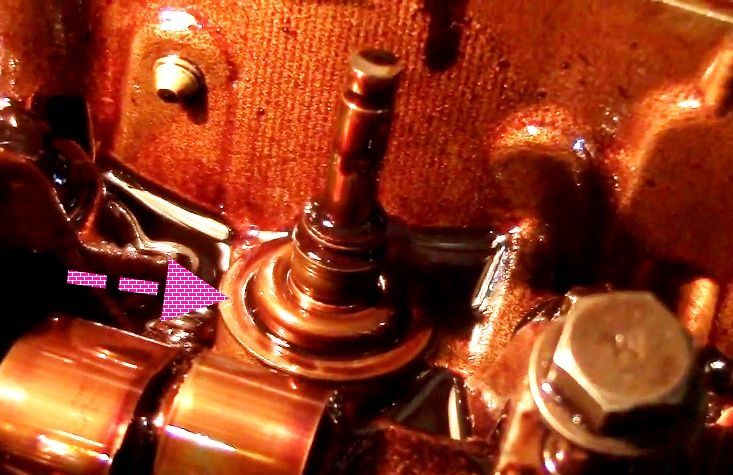 The support washer can not be removed

We press the oil-removing cap from the valve guide sleeve.

To do this, we install an inertial puller on the cap and sharply hit the collet of the puller with a striker.

Then we sharply hit the handle of the device with a striker, thereby compressing the cap from the sleeve. 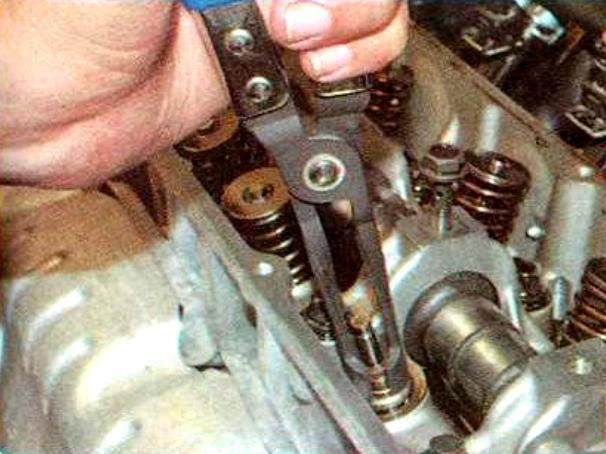 If there is no inertial cap puller, we remove the cap with a special pincer-type puller or pliers, applying force strictly upwards and without turning the cap so as not to damage the valve guide sleeve.

The valve guide sleeve is made of cermet, the edge is easily broken off, so you need to be careful not to damage it. 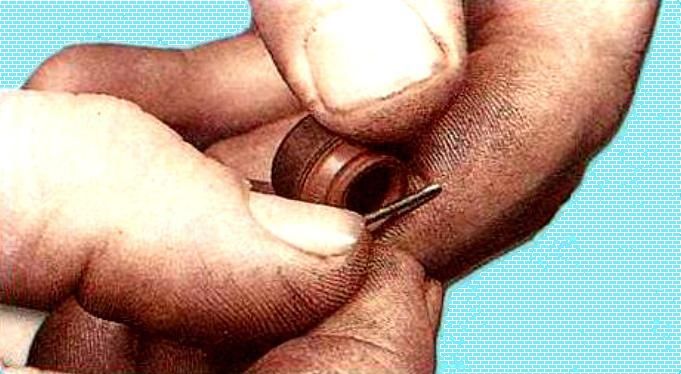 It is recommended to remove the springs from them before installing the oil caps, if there are no plastic mounting bushings in the kit. 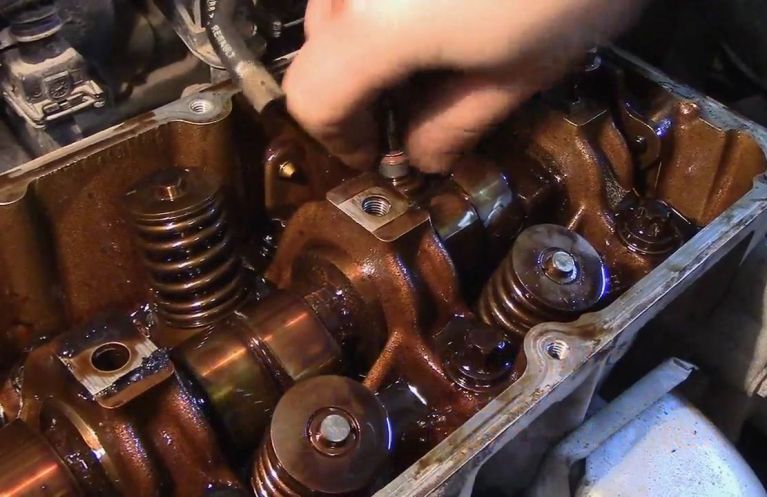 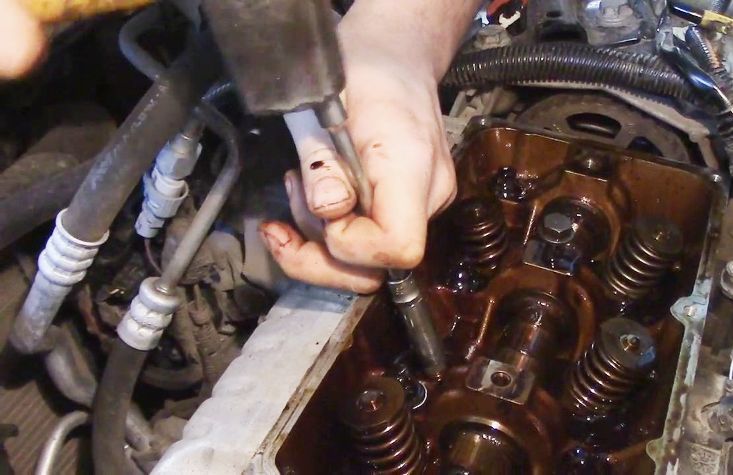 We install the mandrel for pressing the cap and with light blows on the mandrel we press the cap until it stops (you can choose a mandrel of a suitable diameter).

Install the spring and the valve plate in reverse order. We install the crackers with the help of a device so that they stand in the grooves of the valve stem.

After installing the crackers, we hit the end of the valve with a hammer through a metal rod so that the crackers sit in place.

We turn the crankshaft half a turn so that the pistons of the second and third cylinders are in the TDC, and replace the oil-removing caps of the remaining valves.

We install the rocker arm with rocker arms in place and check the valve clearances.

We install all the removed parts in reverse order.

The replacement of the K4M oil caps is carried out in the same way.

The difference is in the method of installing the piston of the first cylinder in the TDC of the compression stroke.

And there are two camshafts on the K4M engine and there is no rocker arm axis. The camshafts will need to be removed.