The ignition distributor sensor is removed for repair, as well as for replacement

Removing the cover and slider of the distributor sensor 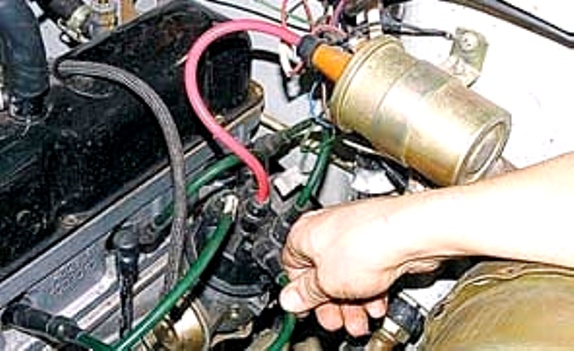 Removing the high-voltage wires from the lid

In order not to confuse, we mark their position. The socket in the cover for the wire of the first cylinder is marked with the number 1 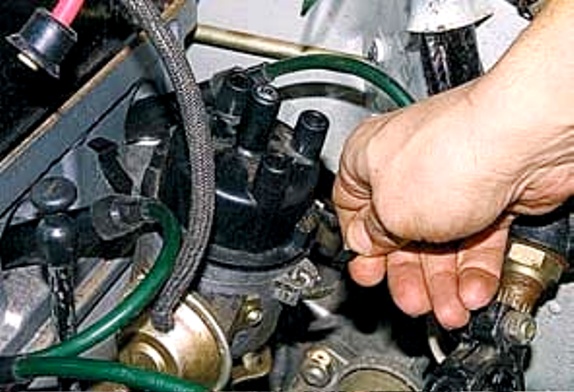 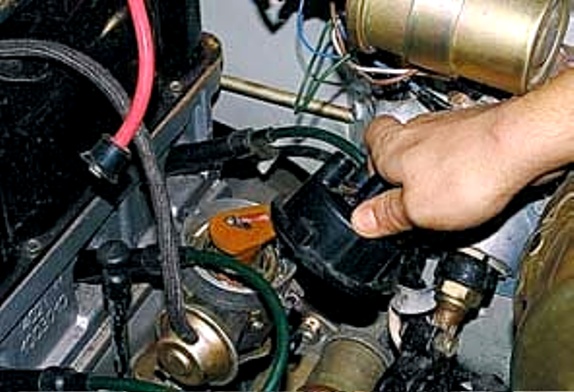 Release the two spring clips and remove the lid 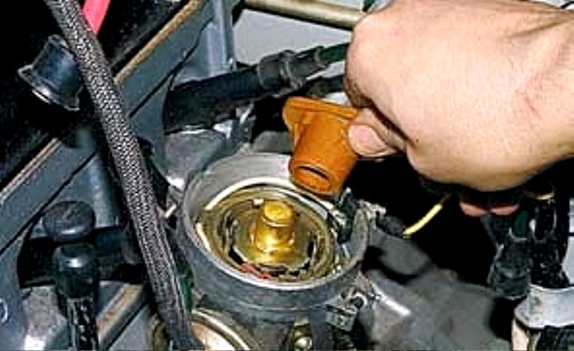 Remove the slider by pulling it up

We install a new slider and cover in place.

We connect the high-voltage wires to the lid, observing the order of operation of the cylinders 1-2-4-3, starting from the output "1" counterclockwise.

The cover is installed in only one position.

When assembling, check the alignment of the lid protrusion with the slot on the distributor housing.

Lubrication of the distributor sensor 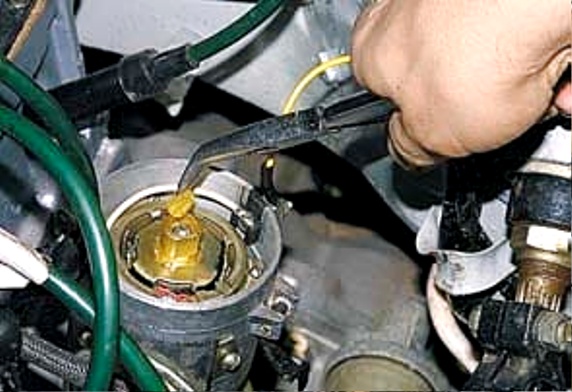 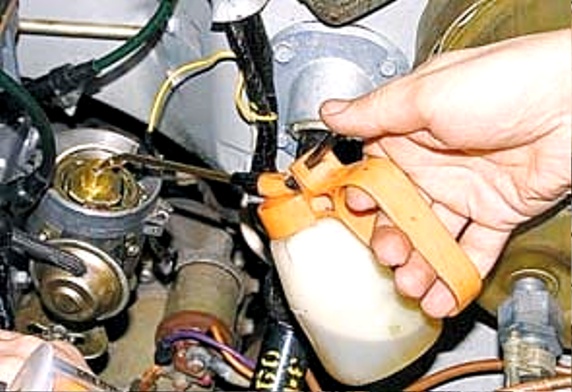 We remove the fillet from the rotor sleeve

We install the filter, the slider and the cover of the distributor sensor 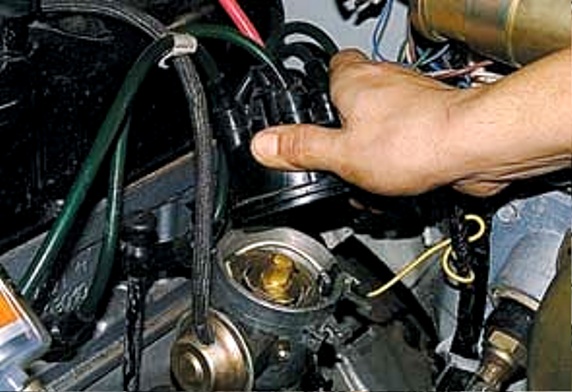 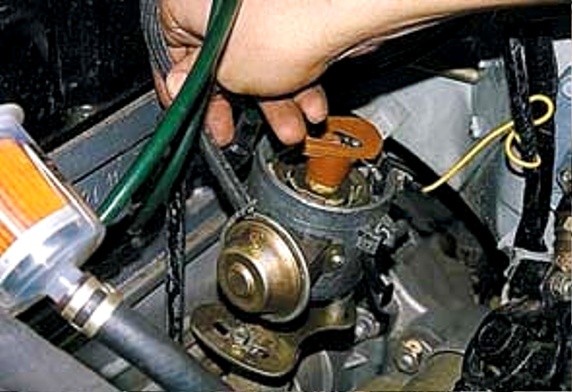 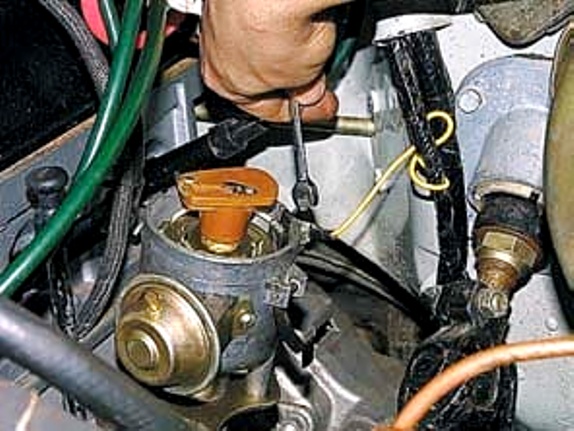 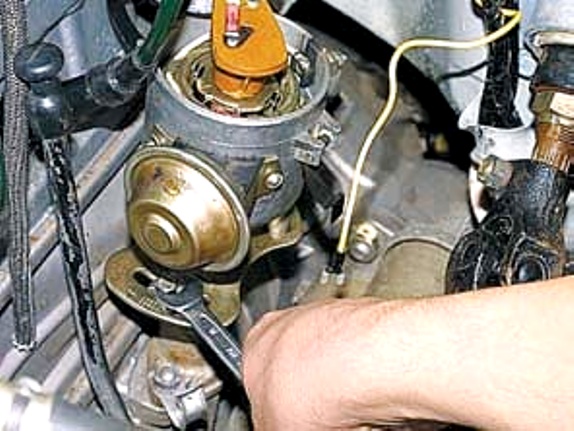 With a key for 7, unscrew the nut for fixing the tip of the low-voltage wire

With the help of a key, we unscrew the bolt of the octane corrector attachment by 10 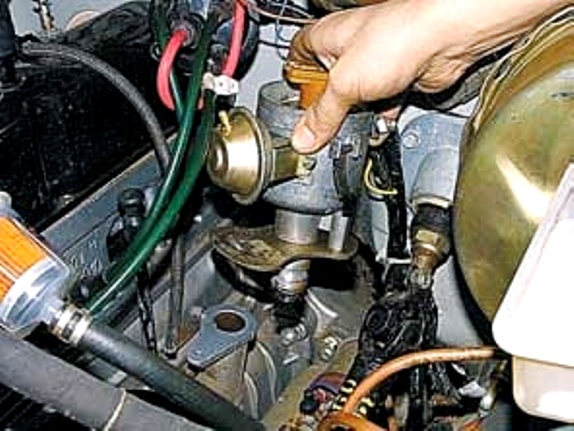 And take out the distributor

We install the distributor sensor in the reverse sequence

Disassembly of the distributor sensor

We remove the distributor sensor as described above 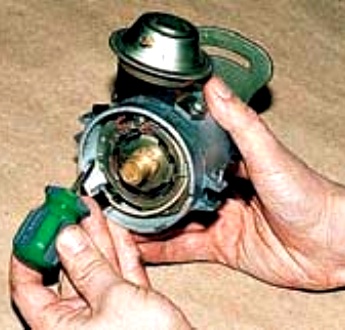 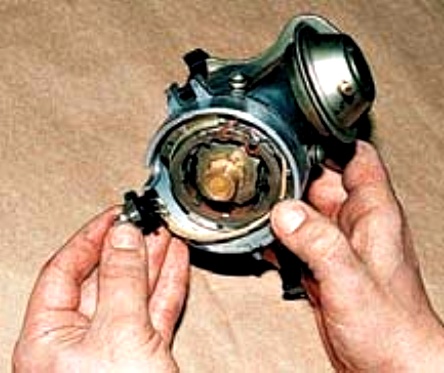 Remove the slider from the distributor sensor, and unscrew the three screws

We push the insulator out of the housing groove 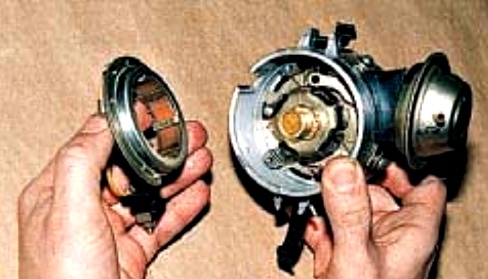 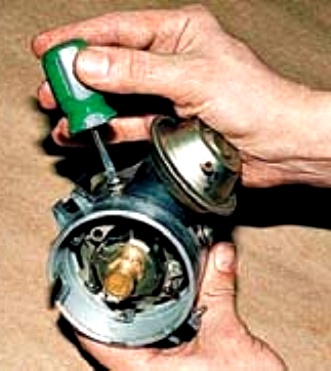 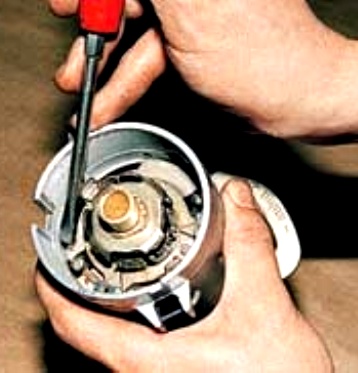 Unscrew the two screws of the stator support 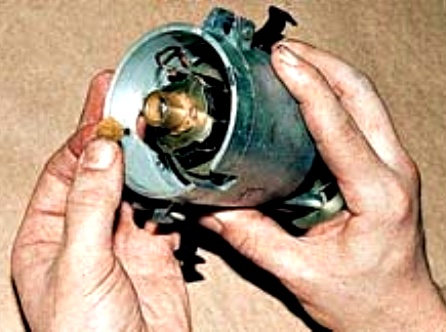 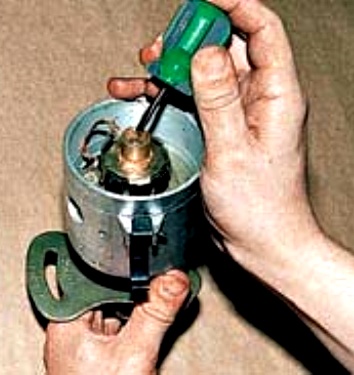 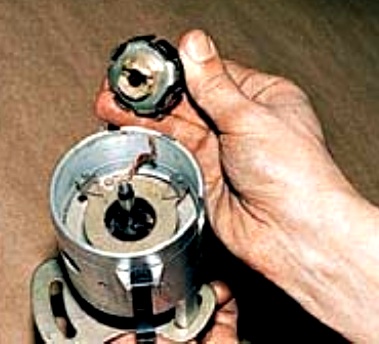 Holding the roller by the drive coupling from turning, turn off the screw

Removing the rotor from the roller 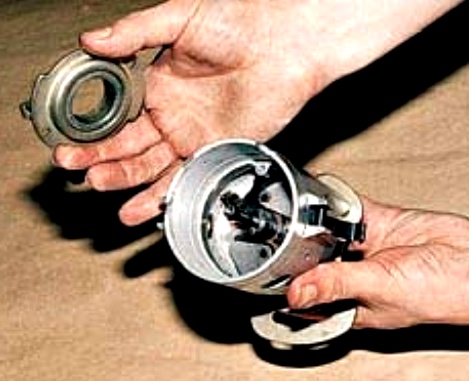 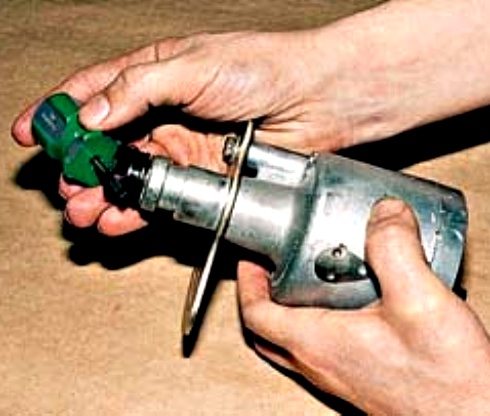 We pry it with a screwdriver and remove the spring ring 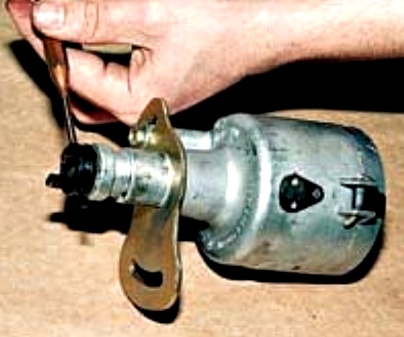 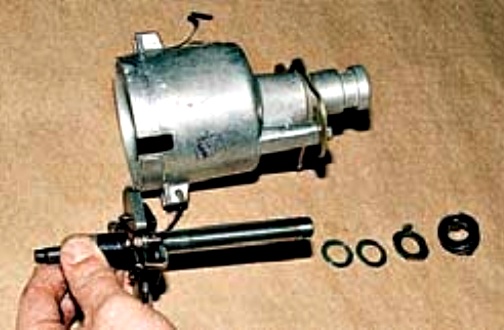 Using the goatee, we push the pin out of the roller hole

And, removing the coupling with washers, we take out the roller assembly with a centrifugal regulator

Before assembling the distributor sensor, lubricate the roller and its bearings with CYATIM-201 or No. 158 grease, apply 1-2 drops of engine oil to the filter.

We assemble the sensor in the following order: we install a roller and a stator support in the sensor housing. 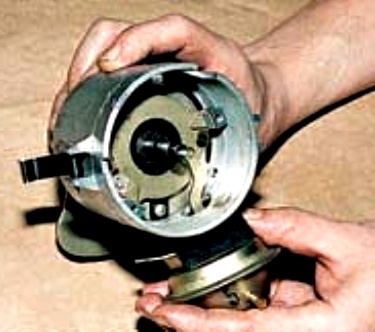 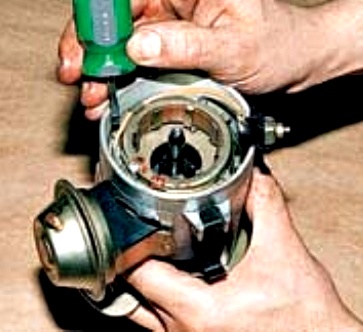 We install the stator and, after making sure that the regulator rod has not jumped off the pin, we tighten the two stator mounting screws

Further assembly is carried out in reverse order

Repair of the current difference plate of the slider

When repairing a worn-out slider in the ignition distributor by soldering a brass strip onto a current-carrying plate, it is difficult to determine the required size from the axis of the slider to its edge.

If the strip turns out to be shorter– we will not get the effect of the repair, and if it is longer, the plate will touch the terminals of the lid.

To determine this size, before the repair, we put a piece of plasticine on the end of the current-carrying plate and, having installed the distributor cap, rotate the crankshaft. 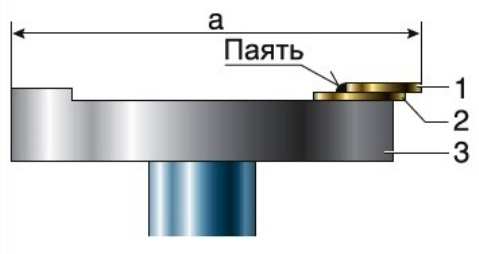 The excess plasticine is cut off by the conclusions, after which we measure the size "a".

Having soldered a strip of brass, we process its protruding end to a size 0.1 mm smaller than the value "a".

Glue the cover of the distributor breaker

If the cover of the interrupter-distributor is cracked on the way, and there is no spare (or suitable glue), you can glue it with garlic juice.

Rub the fracture site with a clove of garlic and squeeze the parts of the lid for one to two minutes, as when using ordinary glue.

Garlic "glue" is not afraid of high temperature in the engine compartment and has good electrical insulation properties.

You can ride with such a cover for quite a long time - with good bonding quality up to several hundred kilometers.