We remove the rear wheel drives when dismantling the rear gearbox, when replacing the drives themselves, replacing the mudguards of the internal and external hinges

We also remove the wheel drives when replacing the drive seals in the rear gearbox.

We perform work on a viewing ditch or overpass.

We turn on the first gear in the gearbox (in the automatic transmission we put it in the “P” position) and install the wheel chocks under the front wheels.

Loosen the wheel bolts on the side to be performed.

Drain the oil from the rear axle gearbox.

Raise the rear of the car and set it on reliable stops.

Unscrew the wheel bolts and remove it. 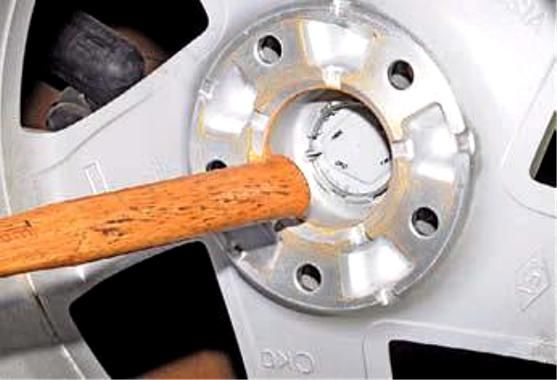 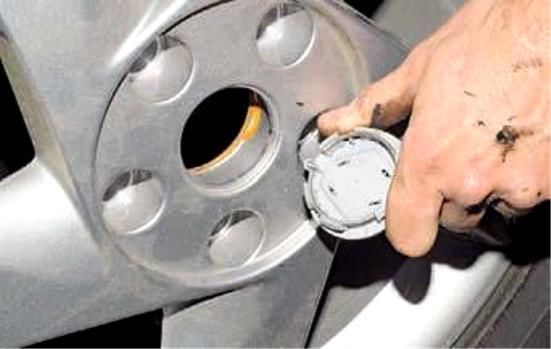 Push out the decorative plug with the hammer handle

Put the wheel in place and fasten it with two bolts.

We lower the car on wheels and brake it with a parking brake. 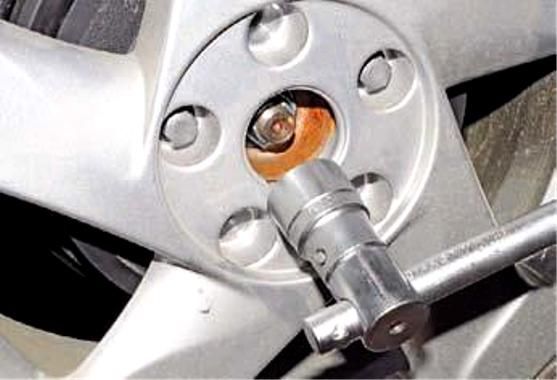 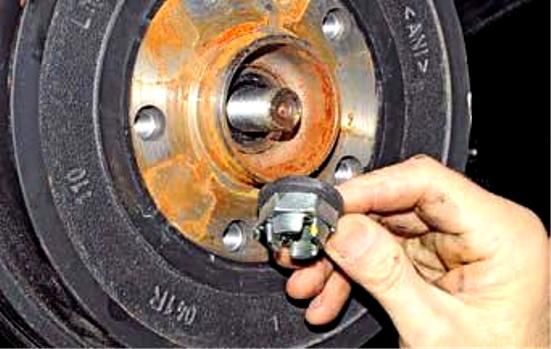 With a 30 head, unscrew the hub bearing nut

Remove the wheel and place the car on a stand. 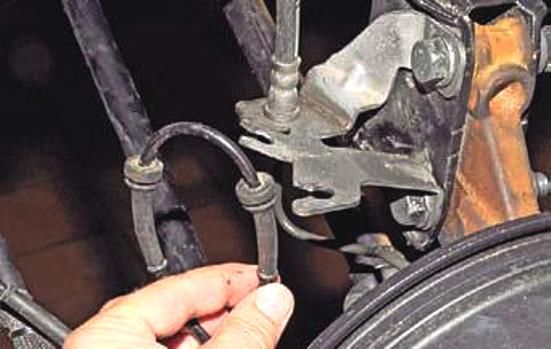 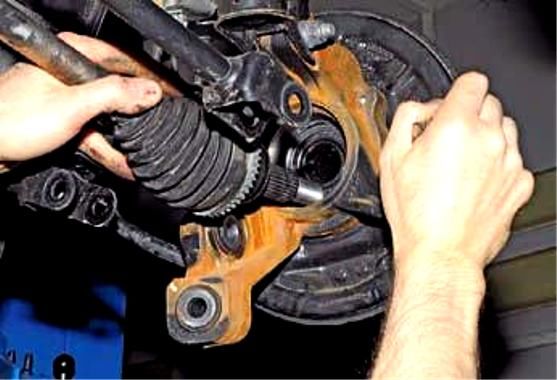 We bring out the rubber couplings of the speed sensor wires.

We remove the parking brake cable from two plastic holders attached to the fuel tank.

We take the fist of the shock strut rear suspension to the side and remove the splined shank of the outer hinge housing from the wheel hub.

At the same time, we hold the wheel drive shaft so that the three-stud does not come out of the inner joint housing. 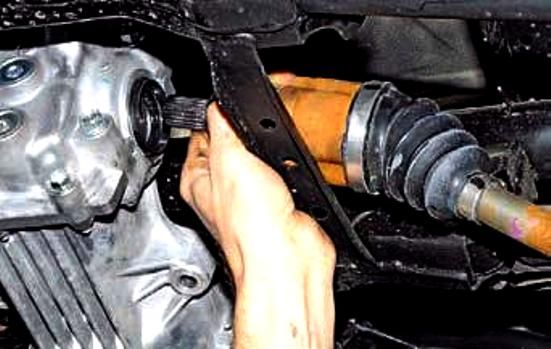 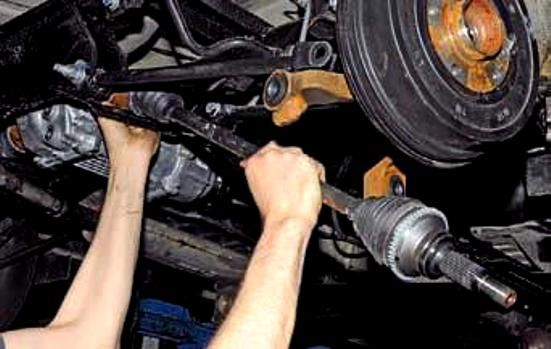 Install the drive in reverse order.

Remove the rear wheel drive as described above.

Place the drive on the table 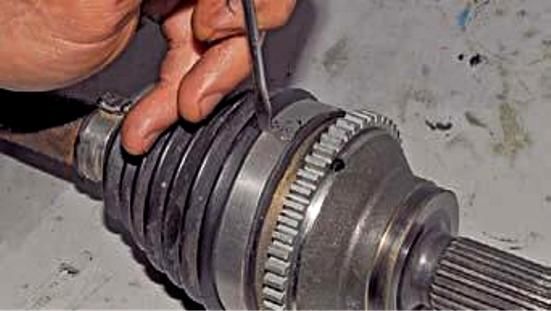 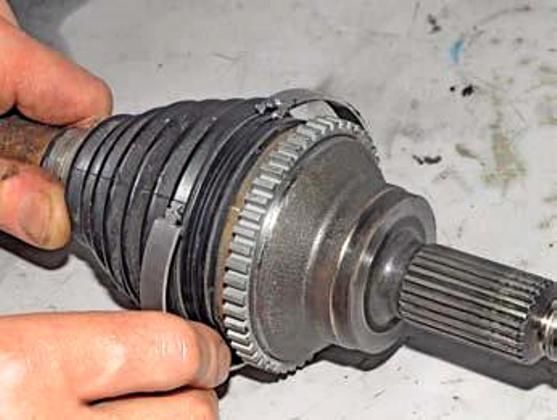 We direct the blade of a flat screwdriver into the joint of the lock of a large clamp, strike with a hammer on the handle of the screwdriver

Open the lock and remove the clamp 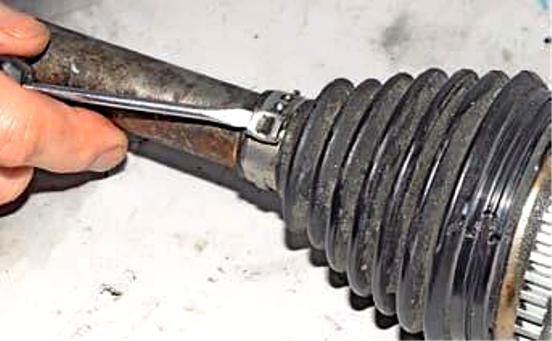 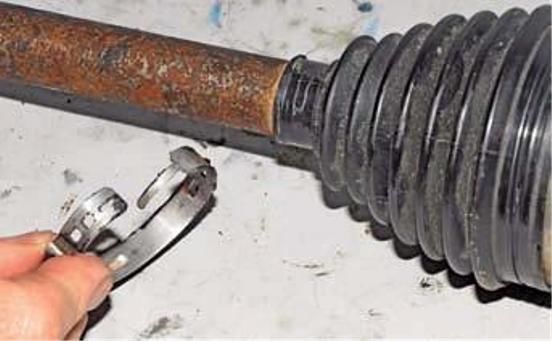 Unlock the small clamp with a screwdriver

Clamp the shaft in a vise.

With a drift, we knock down the outer hinge from the splines of the drive shaft, striking the end of the cage and at the same time moving the punch along the circumference of the cage 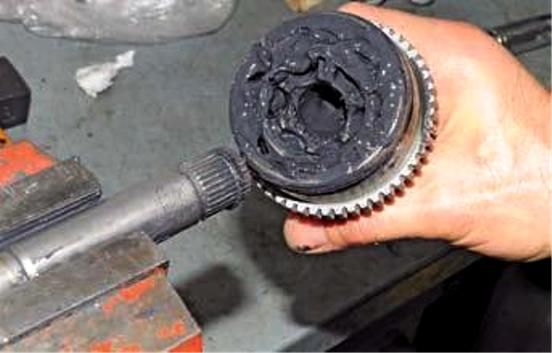 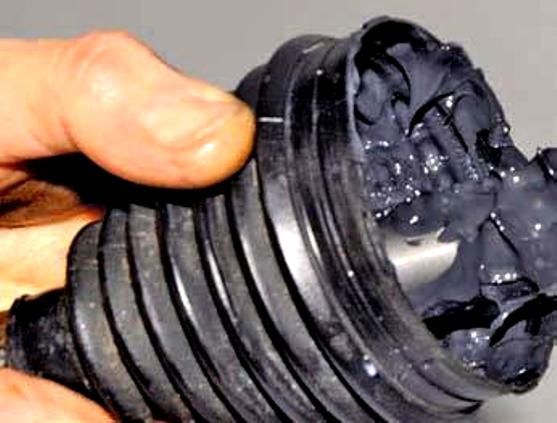 Remove the outer joint from the shaft

Remove the cover from the shaft 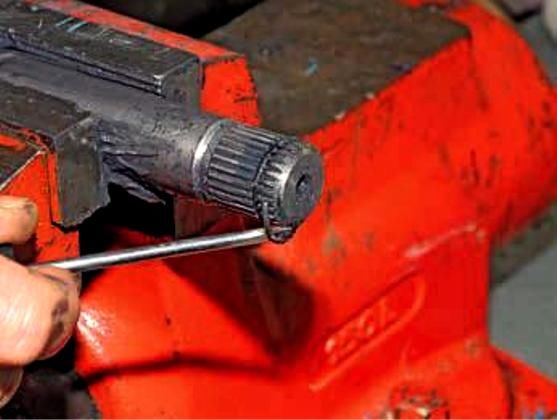 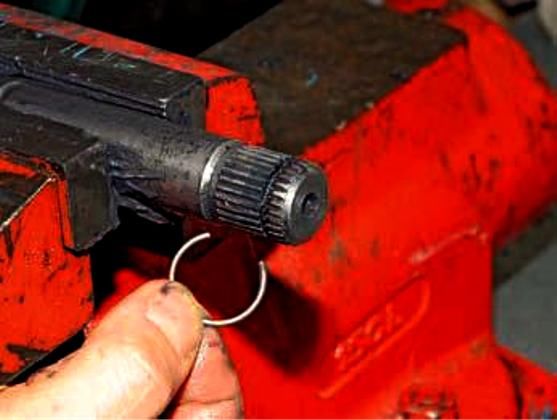 Pry off the retaining ring with a screwdriver

Remove the ring from the groove on the shaft

If the hinge is removed only to replace the boot (when it is known that it has recently been damaged and the CV joint has retained its performance), without disassembling the hinge, remove the old grease from the hinge and wash it in kerosene.

Blow out the hinge with compressed air.

We examine the balls, the cage separator and the internal cavity of the body.

Scoring, dents, cracks, traces of corrosion on the hinge elements are not allowed - such a hinge is replaceable.

We clean the shaft of the old grease and apply a thin layer of new grease on it. We put a new hinge cover on the shaft.

We install a new retaining ring in the groove of the shaft. We invest and evenly distribute the required volume of new grease in the cavities of the hinge body and its cover.

We put the hinge on the shaft and, striking with a hammer through a soft metal spacer on the splined shank of the hinge, press the hinge onto the shaft.

Check the fixation of the hinge cage with the retaining ring.

Checking the mobility of the hinge - it should move without jamming.

We fix the hinge cover with new clamps.

The design of factory clamps does not allow them to be installed in a non-specialized car service.

In this case, you can, for example, use commercially available universal tape clamps for attaching CV joint covers.

Having installed the clamp in the groove of the cover, pull out the tape with pliers, squeezing the clamp.

Tightly pulling the clamp, bend the elongated end of the tape in the opposite direction.

Check the tightness of the clamp, trying to remove the clamp by its lock along the groove of the cover.

Remove the rear wheel drive, as described at the beginning of the article.

Place the drive on the workbench. 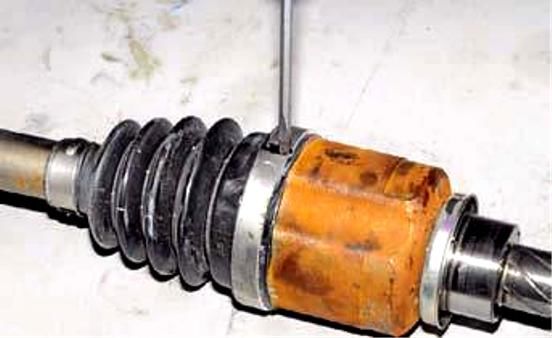 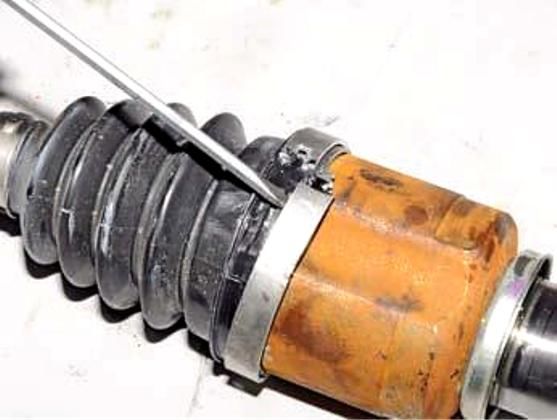 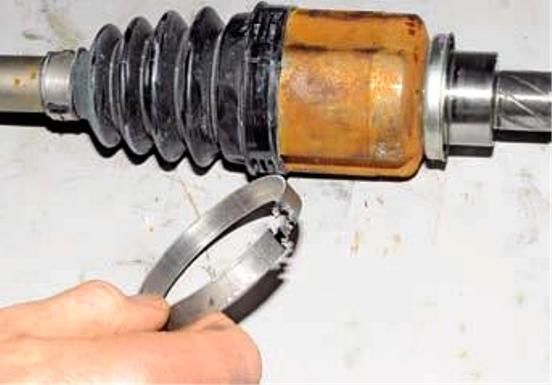 Having directed the blade of a flat screwdriver at the joint of the clamp lock, we strike the handle of the screwdriver with a hammer

Opening the lock of the large clamp 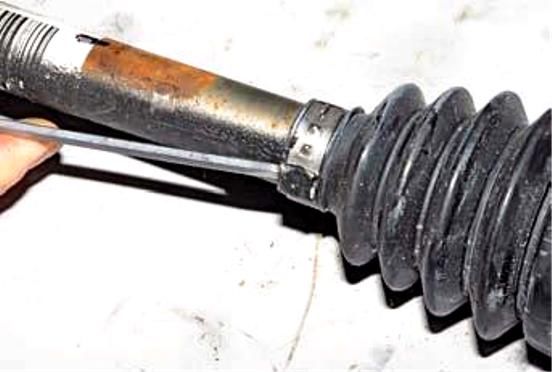 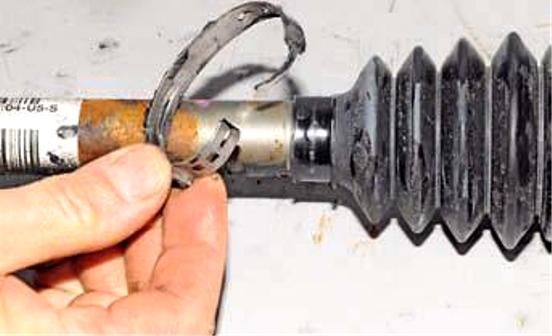 Unlock the small clamp with a screwdriver

Remove the small collar. Pulling Removing the cover from the hinge body 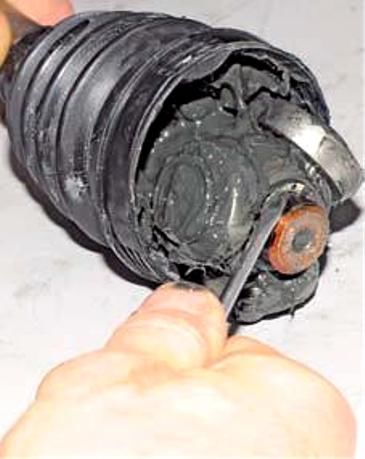 Pry off the retaining ring with a screwdriver 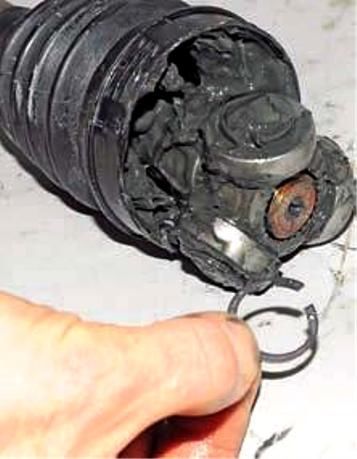 Remove the stopper from the groove on the shaft

Remove the three-stud from the shaft 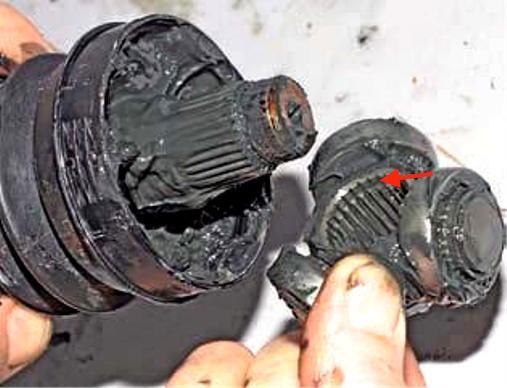 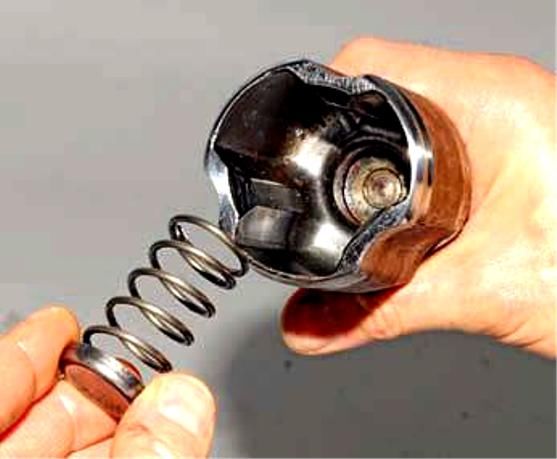 When assembling the hinge, the three-stud must be installed on the shaft so that the groove on the three-stud (shown by the arrow) is directed towards the cover.

Remove the spring along with the thrust washer 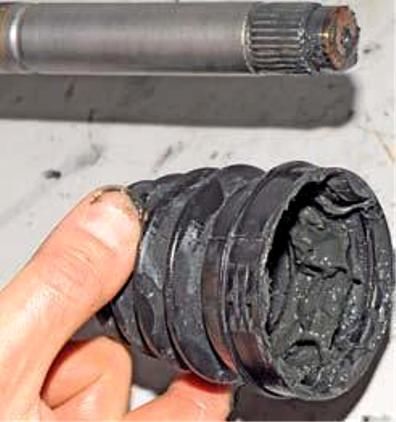 Remove the cover from the shaft

We remove the old grease from the hinge body and wash it in kerosene.

We wipe the hinge with a rag and blow it with compressed air.

We inspect the rollers, needle bearings of the three-stud and the inner cavity of the hinge housing.

The three-stud rollers should rotate freely on needle bearings, without jamming.

Scoring, dents, cracks, traces of corrosion on the hinge elements are not allowed - such a hinge is replaceable.

Before installing a new hinge boot, apply a small amount of grease to the end of the shaft.

Having put the cover on the shaft, we place its belt under the small collar in the groove of the shaft.

We install a new retaining ring in the groove of the shaft.

We fix the hinge cover with new clamps.