Features of the ECM with an electronic gas pedal VAZ-2123 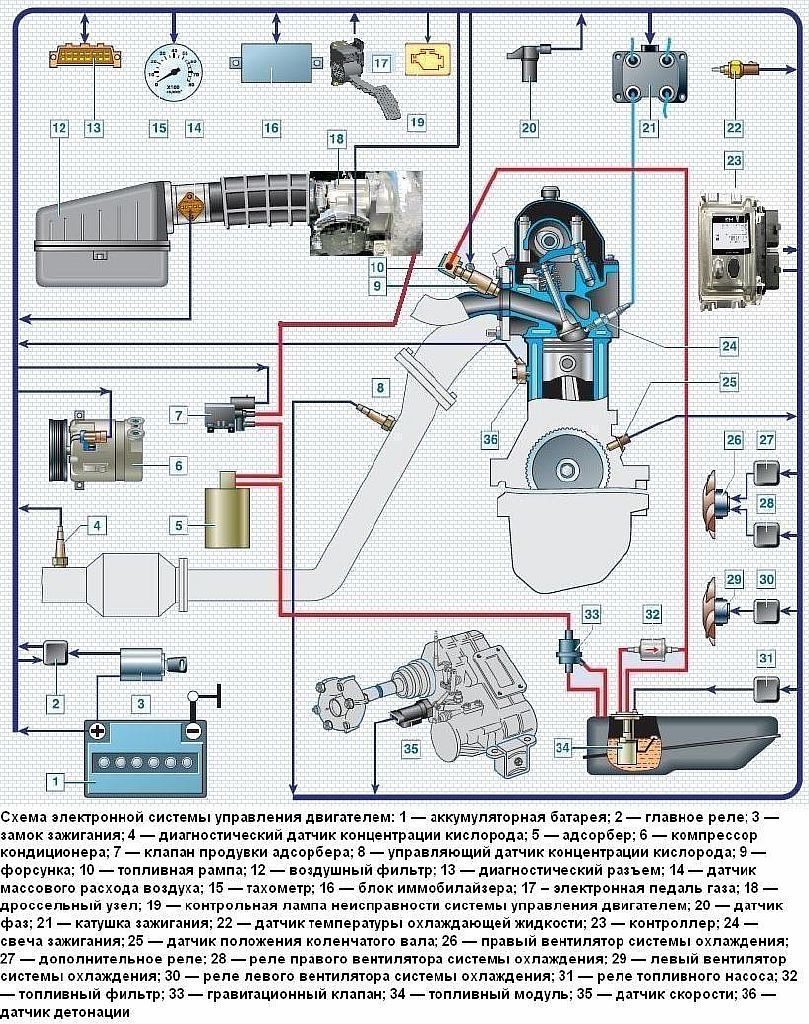 The electronic engine control system (ECM) consists of a controller, sensors for engine and vehicle operation parameters, as well as actuators.

RAM is used by the microprocessor to temporarily store current information about the operation of the engine (measured parameters) and calculated data.

Also, fault codes are recorded in the RAM.

PROM determines the most important parameters of engine operation: the nature of the change in torque and power, fuel consumption, ignition timing, composition of exhaust gases, etc. PROM is non-volatile, i.e. the contents of its memory do not change when the power is turned off.

Records operating parameters as well as engine and vehicle malfunctions. It is a non-volatile memory. 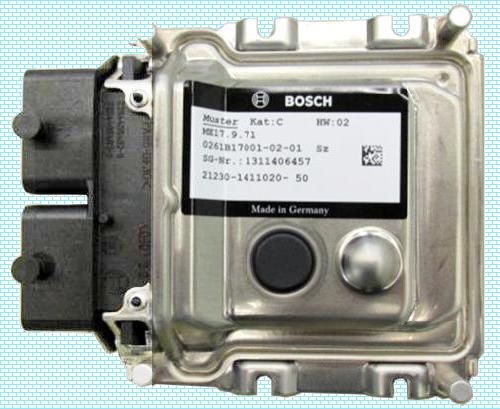 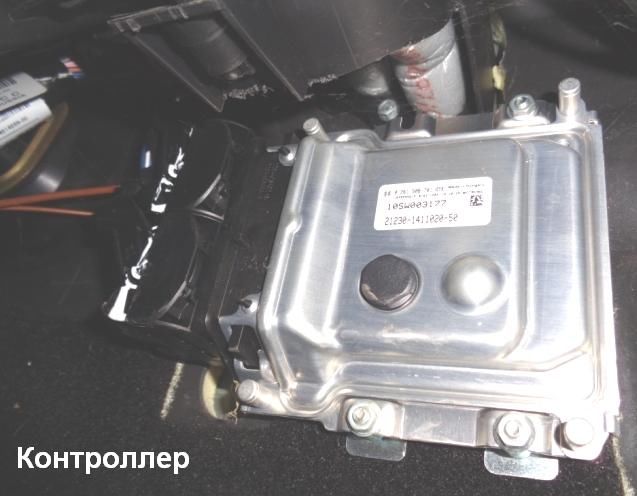 The controller is the central unit of the engine management system. It receives information from sensors and controls actuators, ensuring optimal engine operation at a given level of vehicle performance.

The controller is located in the area of ​​the passenger's feet and is attached to the bulkhead.

The controller controls the on and off of the main relay (ignition relay), through which the supply voltage from the battery is supplied to the elements of the system (except for the electric fuel pump, electric fan, control unit and APS status indicator).

The controller turns on the main relay when the ignition is turned on.

When the ignition is turned off, the controller delays turning off the main relay for the time necessary to prepare for the next turn on (completion of calculations, setting the throttle to the position before starting the engine).

When the ignition is turned on, the controller, in addition to performing the functions mentioned above, exchanges information with the APS (if the immobilization function is enabled).

If the exchange determines that access to the vehicle is allowed, then the controller continues to perform engine control functions. Otherwise, the engine will be blocked.

It determines the presence of malfunctions of the system elements, turns on the alarm and stores codes in its memory that indicate the nature of the malfunction and help the mechanic to carry out repairs. 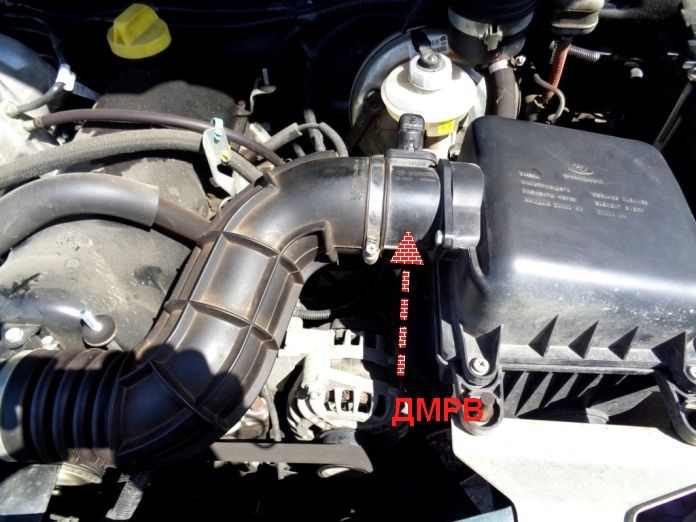 The engine control system uses a hot-wire type MAF with a frequency response of a digital output signal.

It is located between the air filter and the intake pipe hose.

The MAF signal is a frequency (Hz) signal, the pulse repetition rate of which depends on the amount of air passing through the sensor (increases with increasing air flow).

The scan tool reads the sensor as airflow in kilograms per hour. 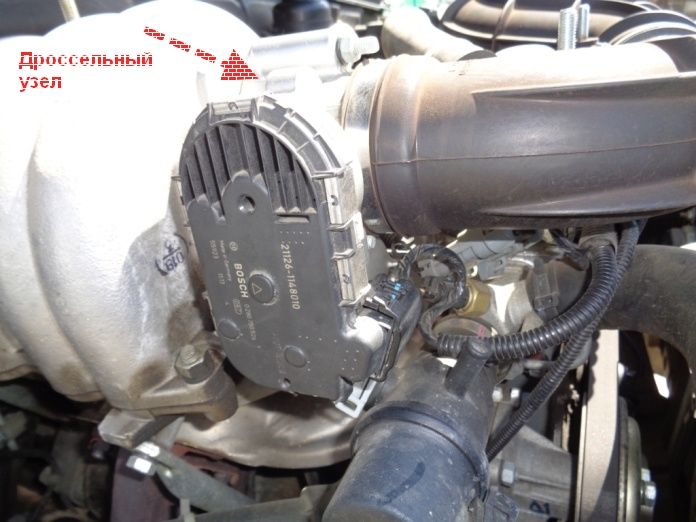 In an EAF system, two TPSs are used. TPS are part of the throttle branch pipe with electric drive.

From the output connected to the moving contact of the potentiometer, the output signal of the TPS is supplied to the controller.

The controller controls the throttle position electrically according to the position of the accelerator pedal.

According to the readings of the TPS, the controller monitors the position of the throttle valve.

When the ignition is turned on, the controller sets the damper to the pre-start position, the degree of opening of which depends on the temperature of the coolant.

If you do not start the engine and do not press the accelerator pedal within 15 seconds, the controller de-energizes the throttle pipe electric drive and the throttle valve is set to the position of 7-8% throttle opening.

If a malfunction occurs in the TPS circuits, the controller de-energizes the throttle actuator, stores its code in its memory and turns on the signaling device. In this case, the throttle valve is set to the position of 7-8% throttle opening. 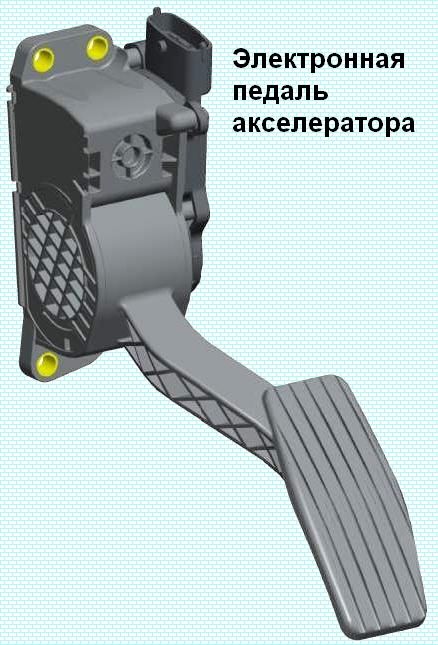 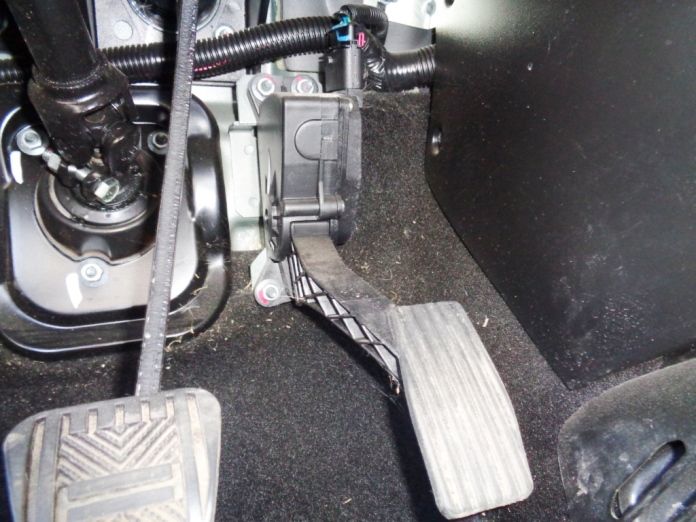 The electronic gas pedal is located on a bracket under the driver's right foot.

The RPA is mechanically connected to the pedal arm drive. Two independent springs between the pedal arm and the body create a return force.

Receiving an analog electrical signal from the ESA, the controller generates a signal to control the throttle position.

The output voltage of the DPPA changes in proportion to the pressing of the accelerator pedal. 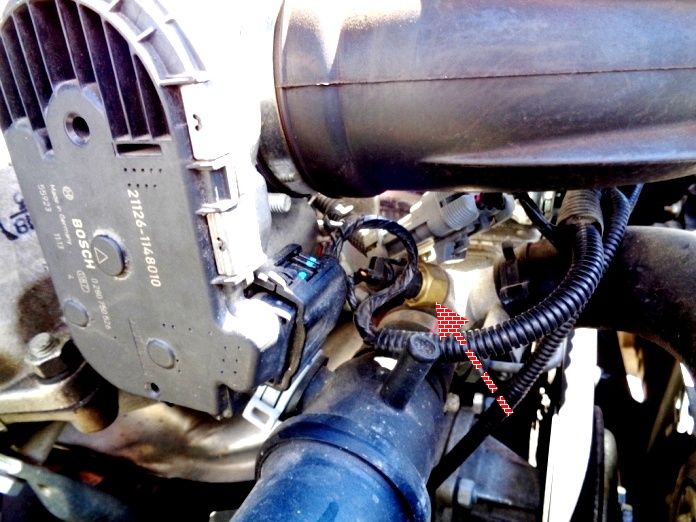 The sensor is installed in the engine coolant flow, on the outlet pipe of the engine water jacket.

The sensing element of the coolant temperature sensor is a thermistor, i.e. a resistor whose electrical resistance changes with temperature. 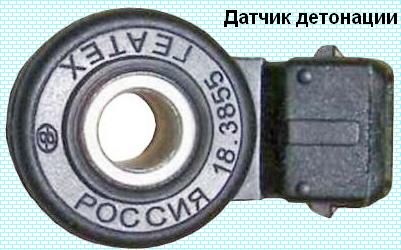 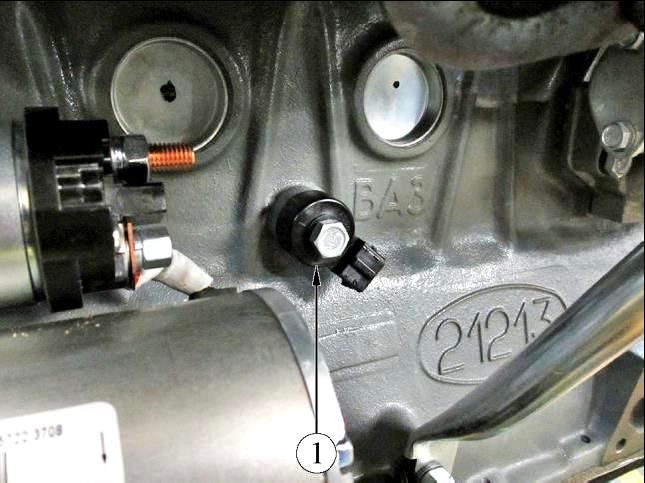 The piezoceramic sensing element DD generates an AC voltage signal, the amplitude and frequency of which correspond to the engine vibration parameters.

When detonation occurs, the amplitude of vibrations of a certain frequency increases.

The controller at the same time corrects the ignition timing to dampen detonation. 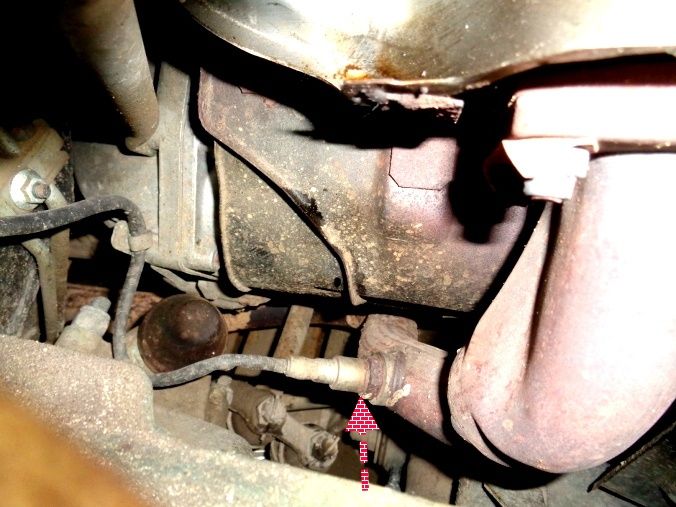 The most effective reduction in the toxicity of exhaust gases of gasoline engines is achieved with a mass ratio of air and fuel in the mixture (14.5 ... 14.6): 1.

This ratio is called stoichiometric.

At this air-fuel ratio, the catalytic converter most effectively reduces the amount of hydrocarbons, carbon monoxide and nitrogen oxides emitted with exhaust gases.

A catalytic converter is used to reduce the content of hydrocarbons, carbon monoxide and nitrogen oxides in the exhaust gases.

The neutralizer oxidizes hydrocarbons and carbon monoxide, as a result of which they are converted into water vapor and carbon dioxide.

The controller monitors the redox properties of the converter by analyzing the signal from the diagnostic oxygen sensor installed after the converter. 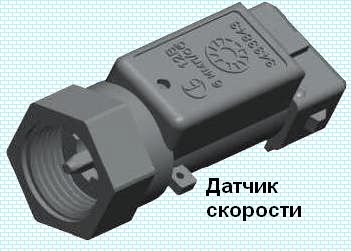 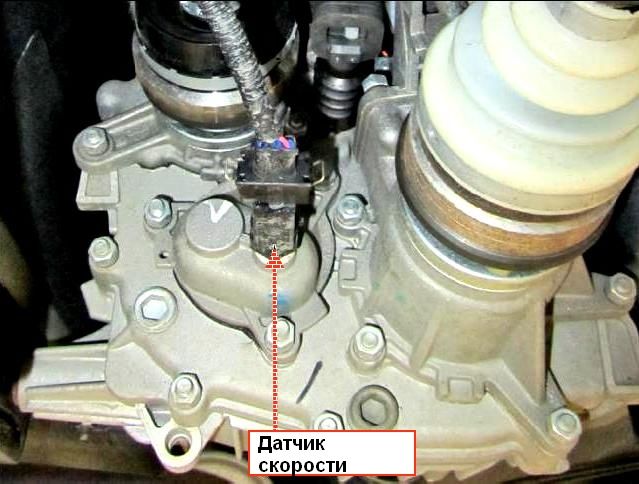 Vehicle speed sensor produces a pulse signal that informs the controller about the speed of the vehicle. DSA is installed on the input shaft of the transfer case.

When the drive wheels rotate, the DSA generates 6 pulses per meter of vehicle movement.

The controller determines the vehicle speed from the pulse frequency. 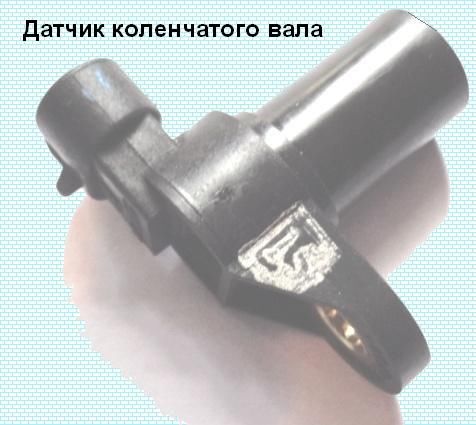 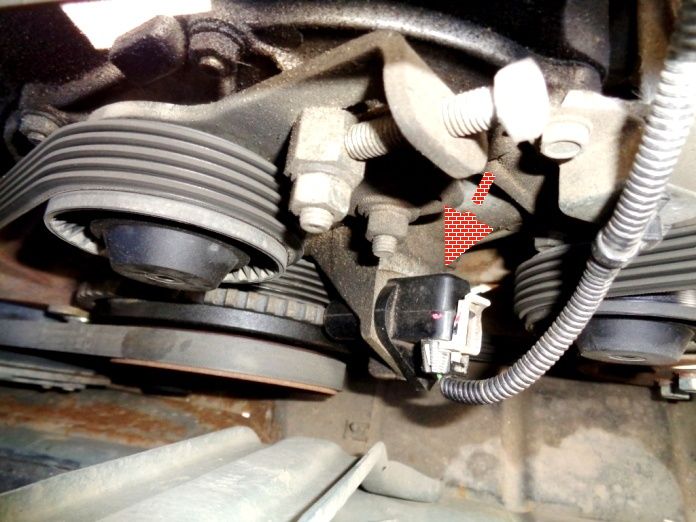 The drive disc is integrated with the alternator drive pulley and is a gear wheel with 58 teeth in 6° increments and a "long" timing cavity formed by two missing teeth.

When the middle of the first tooth of the gear sector of the disk after the "long" cavity is aligned with the axis of the DPKV, the engine crankshaft is in position 114 ° (19 teeth) to the top dead center of the 1st and 4th cylinders.

When the master disk rotates, the magnetic flux in the magnetic circuit of the sensor changes, inducing alternating current voltage pulses in its winding.

The controller determines the position and speed of the crankshaft by the number and frequency of these pulses and calculates the phase and duration of the pulses for controlling the injectors and the ignition coil.

The phase sensor is mounted on the lug of the cylinder head. 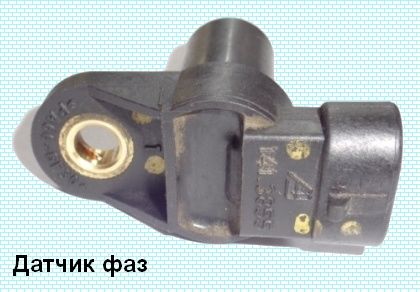 The principle of operation of the sensor is based on the Hall effect.

There is a special pin on the engine camshaft.

When the pin passes against the end of the sensor, the sensor outputs a low-level voltage pulse (about 0 V) ​​to the controller, which corresponds to the position of the piston of the 1st cylinder in the compression stroke.

The phase sensor signal is used by the controller to organize sequential fuel injection in accordance with the order of operation of the engine cylinders. 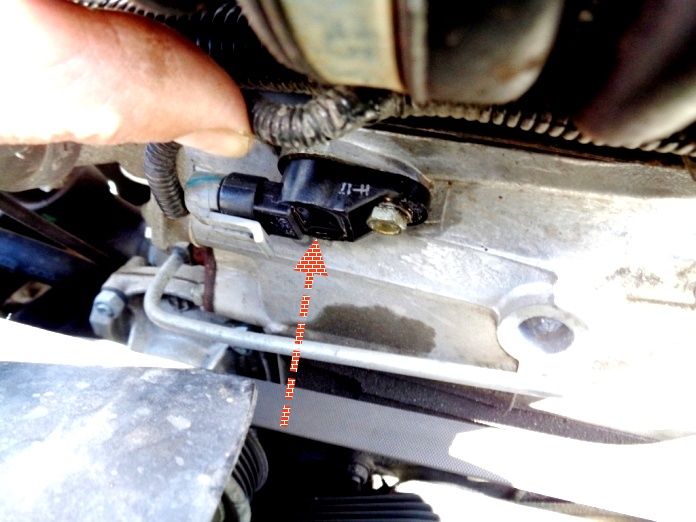 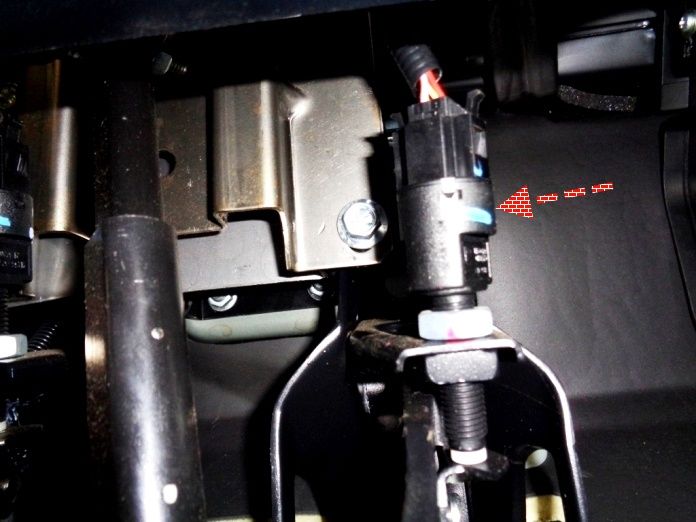 Brake Light Switch is part of the brake pedal assembly and is designed to provide appropriate signals to the ECM when the driver presses/releases the brake pedal.

In throttle-by-wire (E-gas) control systems, the brake pedal switch signals play an important role because they are used by the safety function of the ECM software.

For this reason, it is very important to ensure that the brake light switch is always in working order.

In the event of a discrepancy between its functional characteristics of switching, for example, in case of spontaneous changes in the values ​​​​of the adjustments specified in the instructions (due to vibrations of the brake pedal, wear of the switch and the pedal unit), the car engine may switch to emergency operation with a forcibly reduced power. 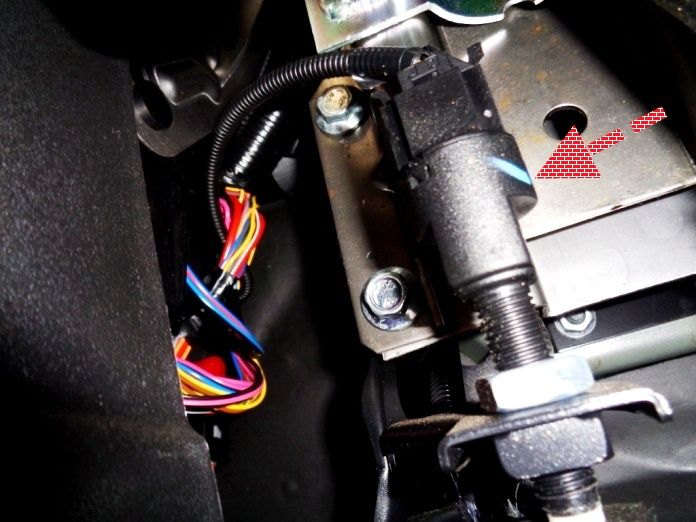 The switch has one group of contacts that switch voltage from terminal "15" of the ignition switch.

When the clutch pedal is depressed, the contacts are open.

The clutch pedal position switch signal is used by the ECM software to improve vehicle performance.