Install the engine on the stand for disassembling and assembling aggregates 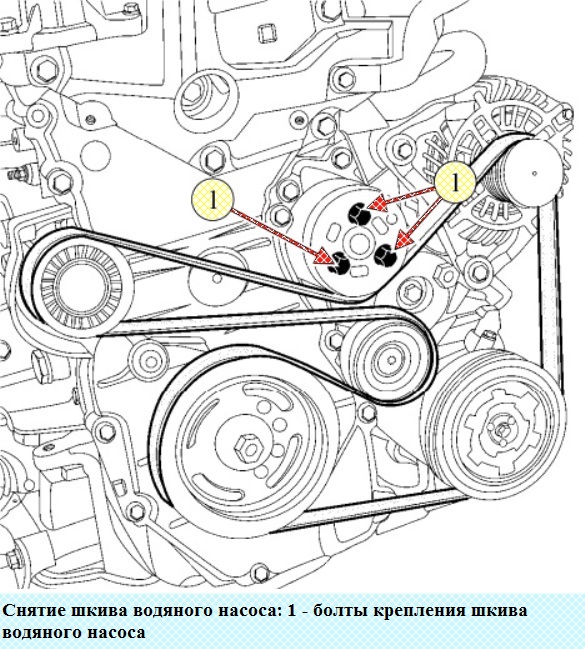 (If you hold the belt of the drives, then you can not block the pulley)

Disconnect the heating hoses from the throttle with pliers

Disconnect the heating hoses of the throttle pipe from the nozzle, the discharge coolant and remove the hoses from the engine

Remove the inlet module assembly with throttle and gaskets

Using the head on 8, remove the bracket mounting of the wiring harness

Using a candle on 14, unscrew the spark plugs

We establish the NMT compression tact in the first cylinder, for this: 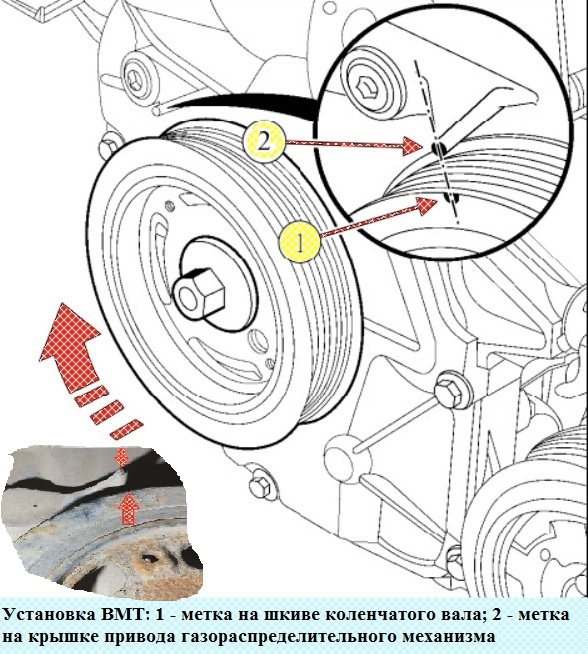 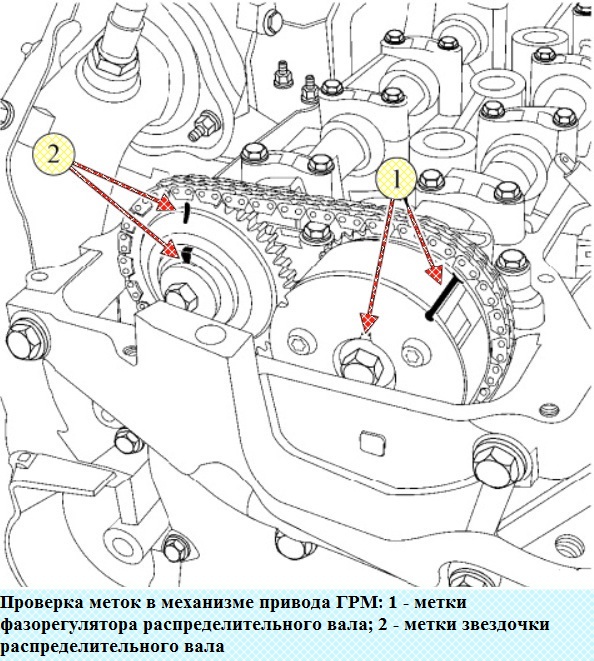 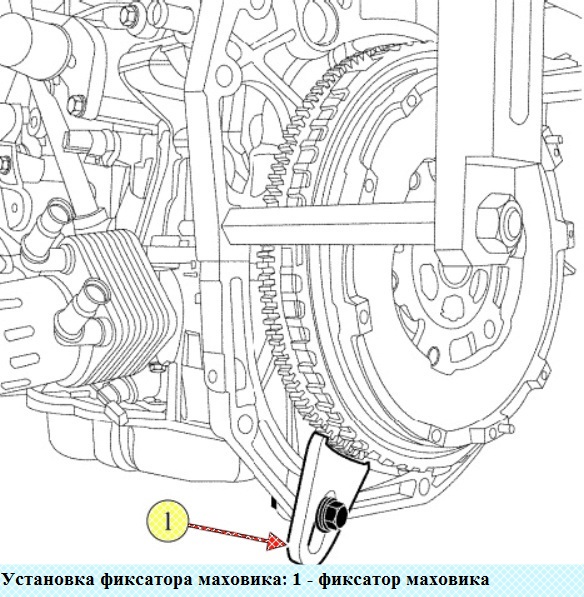 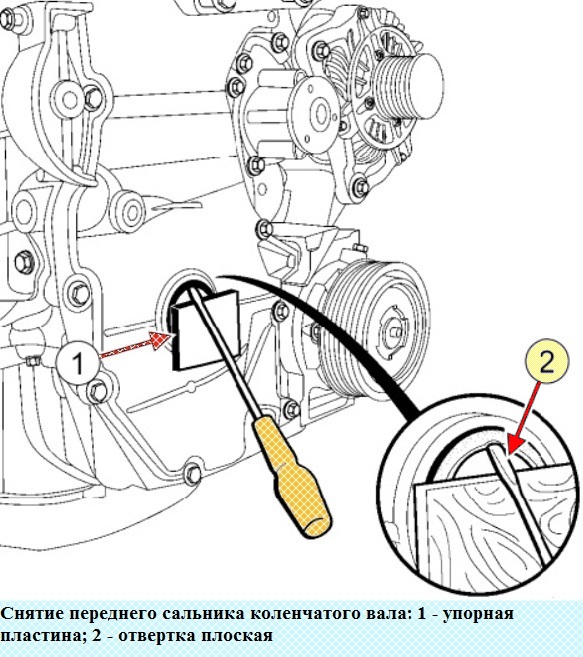 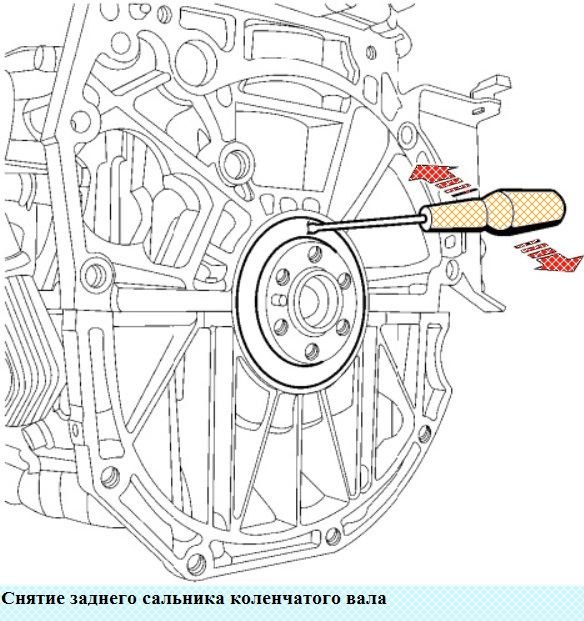 Using a slotted screwdriver and a flat thrust plate of wood or plywood, remove the front seal of the crankshaft, as shown in the figure

With a screwdriver, remove the rear seal of the crankshaft 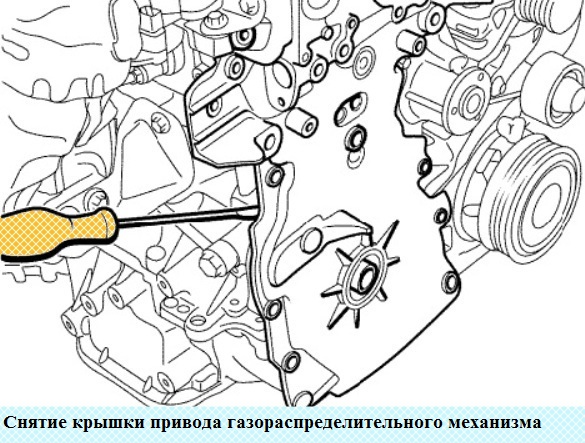 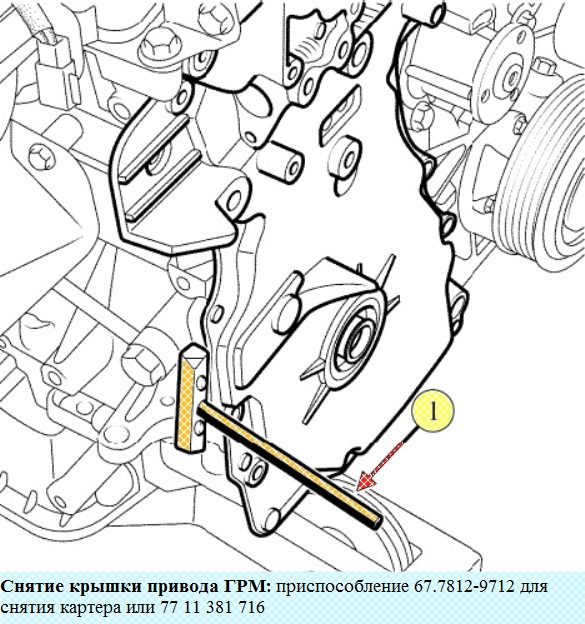 Gently disconnect the timing cover, as shown in the drawings 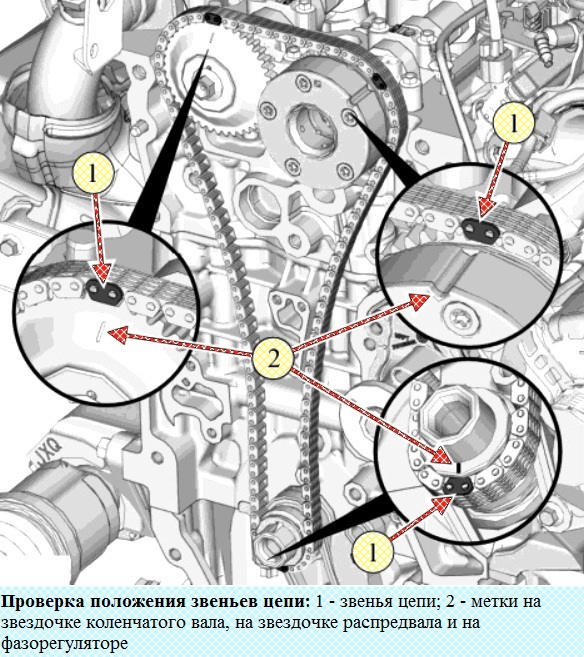 Checking the position of the links 1 (drawing), the timing chain relative to the labels 2 on the crankshaft asterisk, the stricter of the camshaft and the phase management 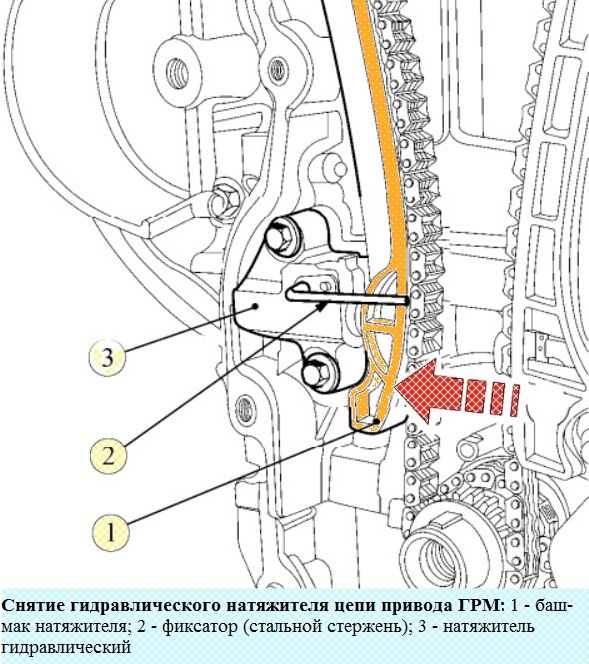 Fix the plunger by setting the tensioner body hole a piece of steel wire 2 with a diameter of 2.5 mm

Head on 8 unscrew the fastening bolts and remove the tensioner, not allowing the plunger"s emission

Remove the timing chain from the engine 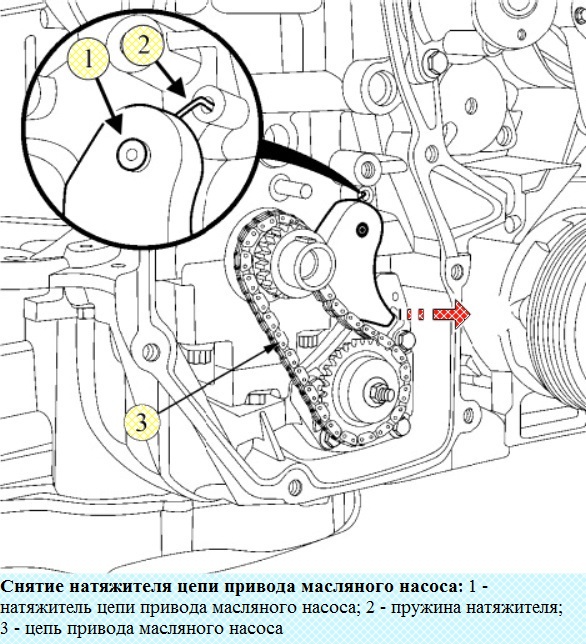 Turn the tensioner 1 (drawing), the chain of the oil pump drive counterclockwise 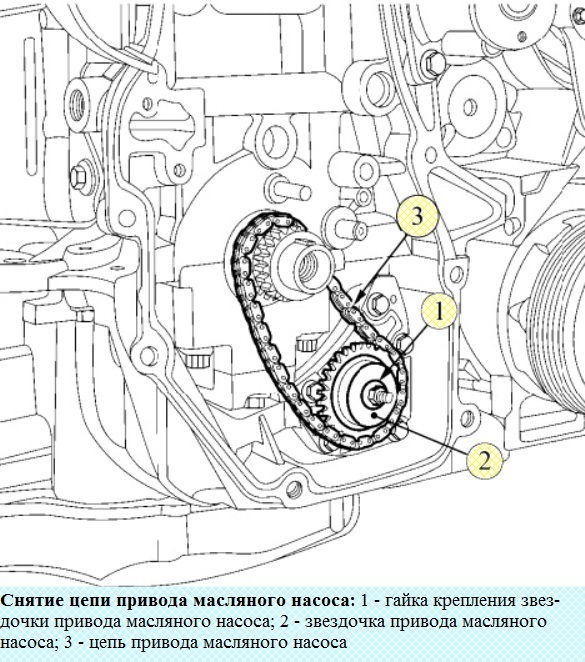 Using the key on 10 and head TORX E8, we unscrew the nut 1 starf of the oil pump drive

With the help of a universal puller, remove the crankshaft star 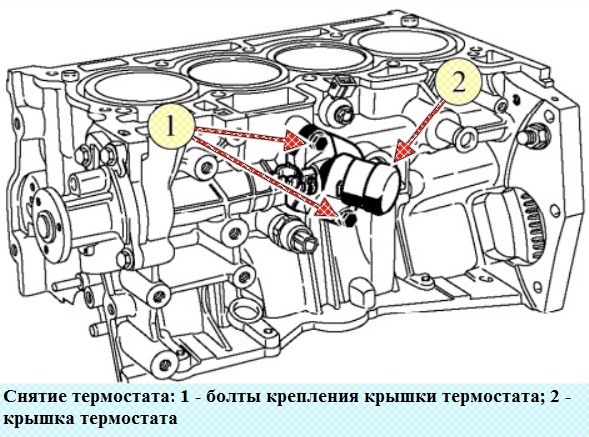 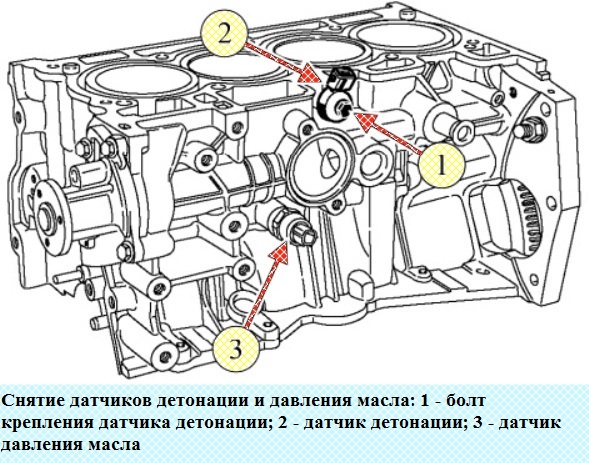 I unscrew the bolt 1 (drawing), fastening the detonation sensor and remove the sensor 2 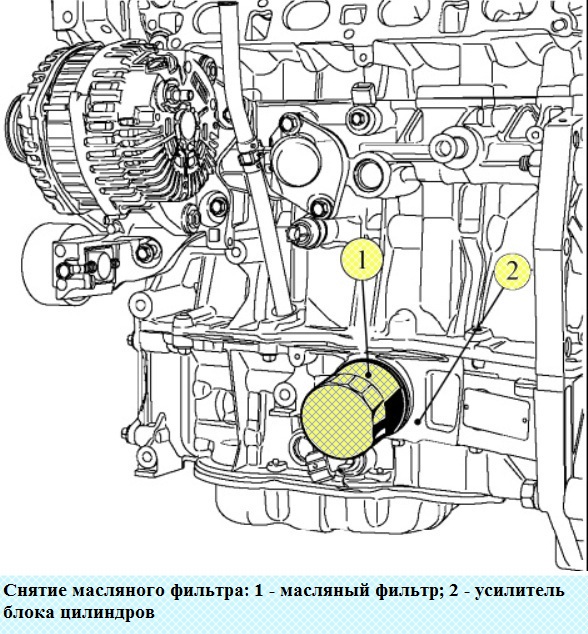 We unscrew and remove the oil filter with a special key.

Remove seven bolts for fastening the nozzle of the discharge coolant, remove the nozzle and gasket

We unscrew the crankshaft position sensor fastening bolt, and remove the sensor

I unscrew the five fastening of the exhaust manifold head to 10, remove the collector and gasket 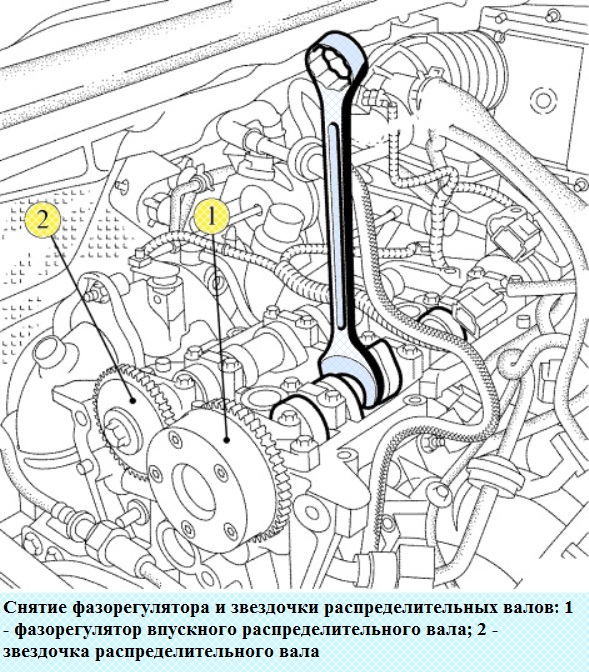 Remove the phase management 1 (drawing) and an asterisk 2 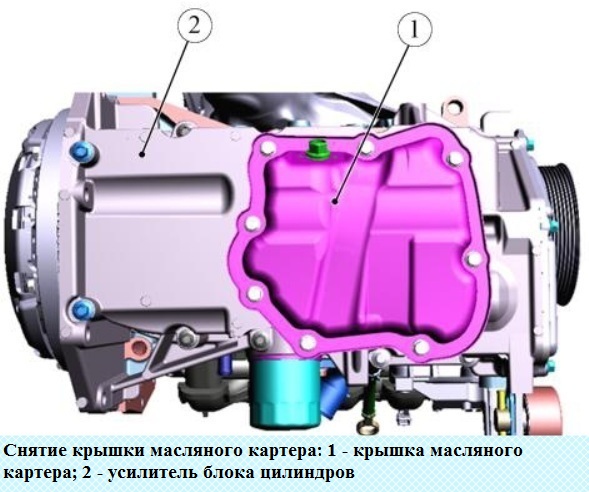 We unscrew the Ten Bolts of Cylinder Block Amplifier 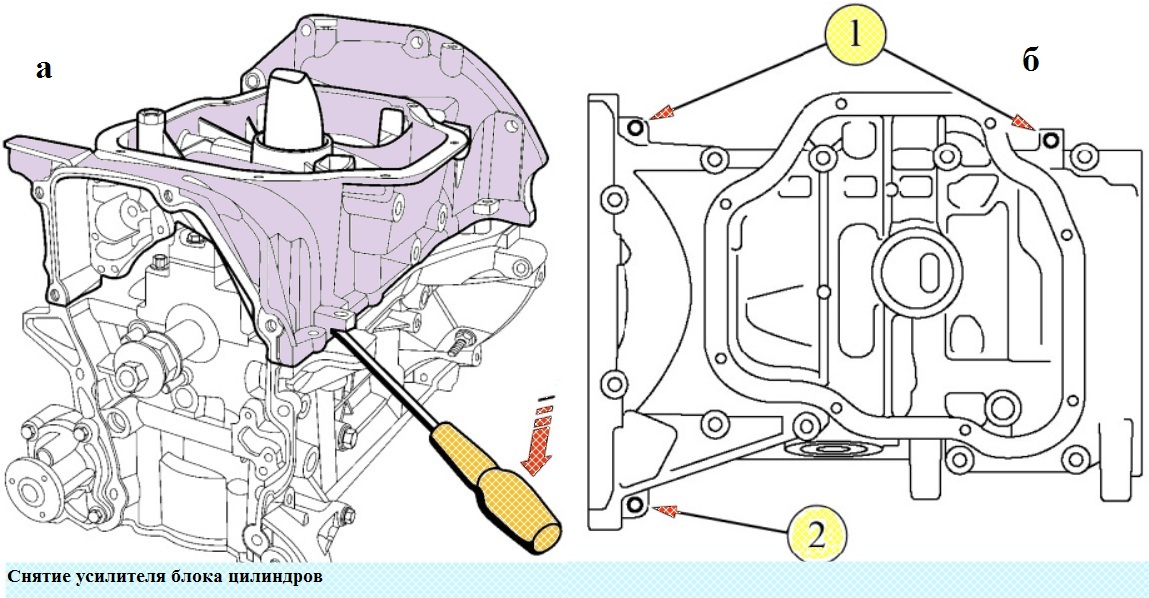 Gently separate the cylinder block amplifier with a screwdriver, as shown in the figure 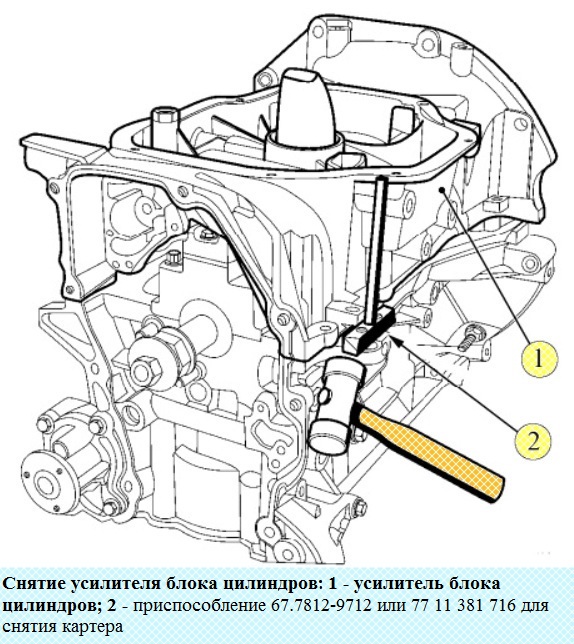 When extracting pistons try not to damage lubricating nozzles

Remove the crankshaft and stubborn semiring

After removing the half-colt, you need to march the position relative to the cylinder block

After removing all the parts of the engine, we rinse, we defect and prepare for the assembly