The engine is electronically controlled. Which includes the ECU engine control unit, which receives information from the sensors.

The diagram of the engine control system is shown in Figure 1. 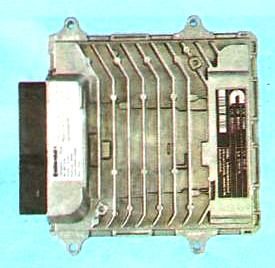 The crankshaft position sensor is installed on the front cover of the cylinder block and is designed to synchronize the operation of the ECU with the TDC of the piston of the 1st cylinder and the angular position of the crankshaft.

The electronic unit determines the crankshaft rotation speed according to the sensor signals.

A sensor malfunction causes a complete failure of the engine management system: in the absence of a signal, the engine cannot be started.

When the camshaft rotates, the protrusions of its master disk change the magnetic field of the sensor, inducing alternating current voltage pulses.

The sensor signals are used by the EVU to organize phased fuel injection in accordance with the order of operation of the cylinders. 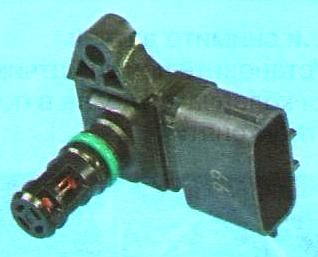 The boost pressure sensor and the intake air temperature sensor in the cylinders are combined into one unit (combined sensor), which is installed on the intake pipe.

According to the sensor signals, the air boost is monitored and regulated.

The ECU compares the measured pressure value with the values ​​of the multi-parameter characteristic stored in its memory.

If the actual pressure value differs from the set value, the ECU regulates the boost by means of the turbine guide vane drive.

In the event of a sensor failure, the control unit limits the boost pressure, which can reduce engine power. 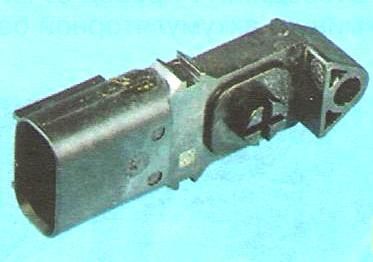 The atmospheric pressure sensor is connected to the engine wiring harness block.

The fuel pressure sensor is installed on the fuel rail.

Based on the signals from the sensor, the electronic control unit controls the bypass valve of the high pressure fuel pump, maintaining a constant pressure in the rail.

The coolant temperature sensor is installed in the thermostat housing.

The electronic control unit calculates the coolant temperature from the voltage drop across the sensor. 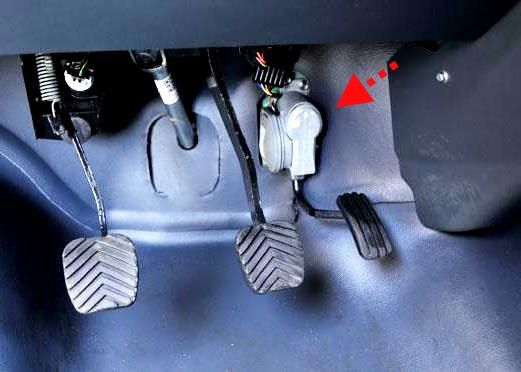 The accelerator pedal position sensor is located in a single housing on the pedal assembly.

Based on the signals from the accelerator pedal position sensor, the ECU determines the position of the pedal.

The signal of this sensor is the main one for calculating the dose of injected fuel.

If the accelerator pedal position sensor is faulty, the engine is running at an increased idle speed.

The clutch pedal limit switch is mounted on the pedal assembly.

By its signal, it is determined whether the clutch is disengaged or not.

When the clutch is disengaged, the cycle dose of injected fuel is briefly reduced and the likelihood of jerking when changing gears is reduced.

If there is no signal from the clutch pedal sensor, jerks may occur when shifting gears.

In this case, the speed control system and the active vibration suppression system in the transmission do not work. 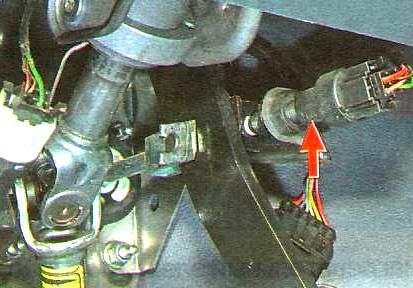 In the absence of a signal from the sensor, the cyclic dose of injected fuel decreases, and the engine power decreases accordingly.

The injector valves are installed in the injector bodies and are solenoid valves controlled by the ECU.

Without a control signal, the valve ball is pressed against the seat and separates the high pressure chamber of the nozzle and the return line.

Under the action of the spring force and the force from the fuel pressure acting on the upper end of the injector control plunger, the injector needle is pressed against the atomizer hole and cuts off the fuel supply to the cylinder.

When a control signal is applied, the solenoid valve opens, opening the communication of the cavity above the control plunger with the return line.

In this case, the pressure in the cavity above the plunger drops, and under the action of high fuel pressure on the lower part of the plunger, it rises together with the nozzle needle.

The hole in the nozzle opens - the injection process begins.

The injected fuel dose is determined by the valve activation time. 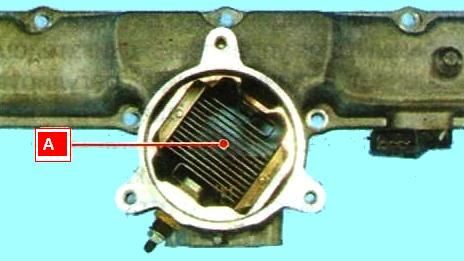 To make starting the engine easier at low ambient temperatures, an electric heater is integrated in the intake manifold.

When the key in the instrument and starter switch (ignition switch) is turned to position "1" (on), the heating element "A" of the heater in the intake pipe is turned on for a certain time depending on the air temperature.

When the heater is switched on, a warning lamp comes on in the instrument cluster.

The starter should be switched on after the warning lamp goes out.

The intake manifold air heater control unit is installed in the engine compartment on the right-hand side.