The design of the clutch of the car GAZelle Next

A dry single-plate clutch with a central diaphragm pressure spring is installed on GAZelle Next cars equipped with a manual transmission.

The clutch is located between the engine and the gearbox.

It is designed to disconnect and connect the flywheel located on the engine crankshaft and the input shaft of the gearbox. 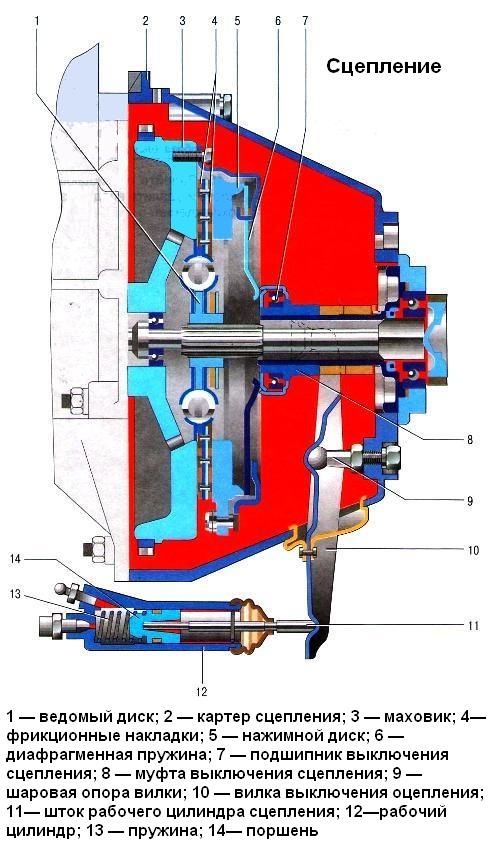 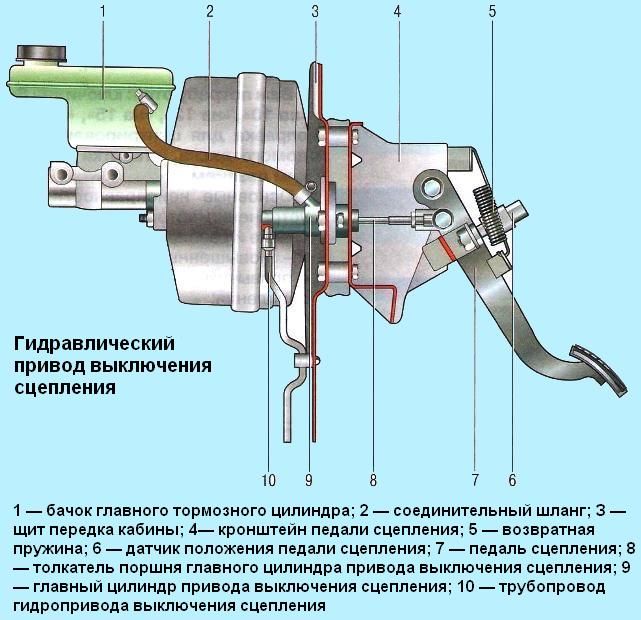 The clutch consists of a driven (friction) disc, a clutch cover with a pressure plate and a diaphragm spring, and a clutch release mechanism.

The pressure plate is mounted in a stamped steel casing bolted to the engine flywheel.

The driven disk is installed on the splines of the input shaft of the gearbox and is clamped by a diaphragm spring between the flywheel and the pressure plate.

The clutch pedal is connected to the master cylinder by means of a pusher, which is equipped with an adjusting unit.

The spring returns the pedal to its original position.

The sensor informs the electronic engine control system about the position of the clutch pedal at any given moment.

Cause of malfunction (Remedy)

- Warping of the driven disk

- Air in the hydraulic clutch system

- Reducing the force of the diaphragm spring

- Oiling the friction linings of the driven disc

Eliminate the causes of oil ingress on the friction linings.

- Slow return of the working cylinder piston to its original position with the clutch pedal fully released; clogging of the expansion hole of the master cylinder or swelling of the cuff

Clean the cylinder from dirt or replace the seal

- Oiling the friction linings of the driven disc

Eliminate the causes of oil ingress on the friction linings.

- Wear of a friction washer of a driven disk

The pressure in the clutch release drive is not held (when smoothly pressed, the pedal reaches the stop, but the clutch does not disengage):

- Dirt of the master cylinder or large wear of its mirror

Flush or replace the master cylinder

- Leakage of liquid through the cuff of the working cylinder of the clutch release drive, violation of the tightness of the pipeline

Replace the collar or slave cylinder, tighten the pipeline fastener

Pump the drive, bleed the air

- Lack of lubrication or defects in the release bearing

- Lack of grease in the plastic bushings of the clutch pedal

Lubricate the bushings with graphite grease

- Breakage or loss of elastic properties of the return spring

Changing fluid and bleeding the clutch

According to the manufacturer's recommendation, the fluid should be replaced after thirty thousand kilometers or 2 years of operation (whichever comes first)

This liquid is hygroscopic (it quickly absorbs moisture from the air).

Condensation formed in the main and working cylinders causes corrosion of parts and failure of the hydraulic drive, therefore we recommend replacing the fluid regardless of the mileage. 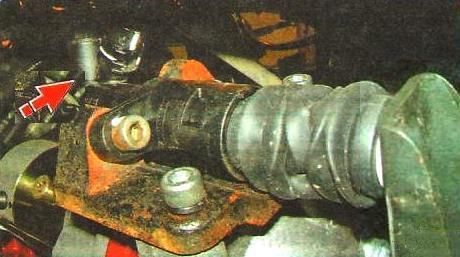 Remove the protective cap from the bleed valve on the clutch slave cylinder.

We put a hose on the valve and lower its end into a container with a small amount of brake fluid.

Ask the assistant to sharply press the clutch pedal four to five times at intervals of one to two seconds, and then hold it down.

Old (dirty) liquid will flow from the hose into the container.

As soon as the liquid stops flowing out, we twist the air release valve.

Constantly monitor the fluid level in the reservoir, not allowing it to drop to the "MIN" mark on the reservoir wall, since at a lower level you may not notice the moment when the clutch release section in the reservoir is completely drained and air will enter the system.

In this case, the hydraulic drive will have to be pumped. Top up with new brake fluid if necessary.

Thus, a gradual displacement of the old fluid by the new one is ensured without draining the hydraulic system.

We repeat the operation until the liquid is completely replaced (a clean liquid without air bubbles should flow out of the hose).

After replacing the fluid, put on the protective cap on the release valve.

Add brake fluid to a level of 15-20 mm from the upper edge of the reservoir. We close the tank with a stopper.