The design of the Mazda 6 engine cooling system

The engine cooling system is liquid (with forced circulation), sealed, with an expansion tank

It is not recommended to fill the cooling system with water, as antifreeze contains anti-corrosion, anti-foaming and anti-scale additives 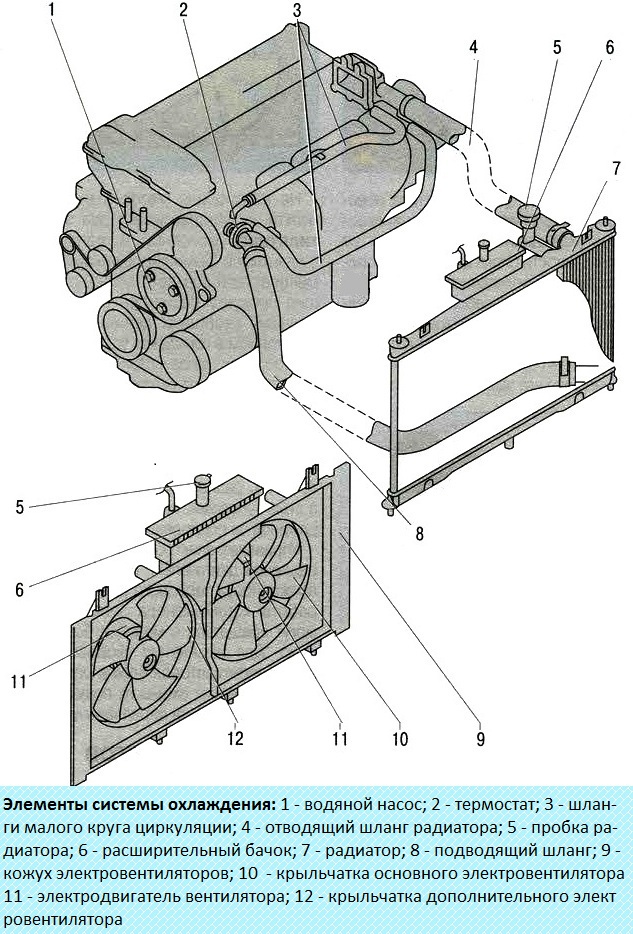 The engine cooling system is shown in Figure 1

In addition to the elements shown in the figure, the system includes a cast engine cooling jacket surrounding the cylinder walls in the block, combustion chambers and gas channels in the block head, and a passenger compartment heater radiator.

From the pump, liquid is supplied to the engine cooling jacket, washes the combustion chamber cylinders and then enters the thermostat.

Depending on the position of the thermostat valve, fluid flows either to the water pump (at low temperature) or to the radiator (at high temperature).

The normal thermal regime of the engine is determined by the temperature of the coolant, which is automatically maintained by a thermostat in the range of 90-100 ‘C.

Radiator with a horizontal arrangement of tubes, with a tubular-ribbon aluminum core and plastic tanks 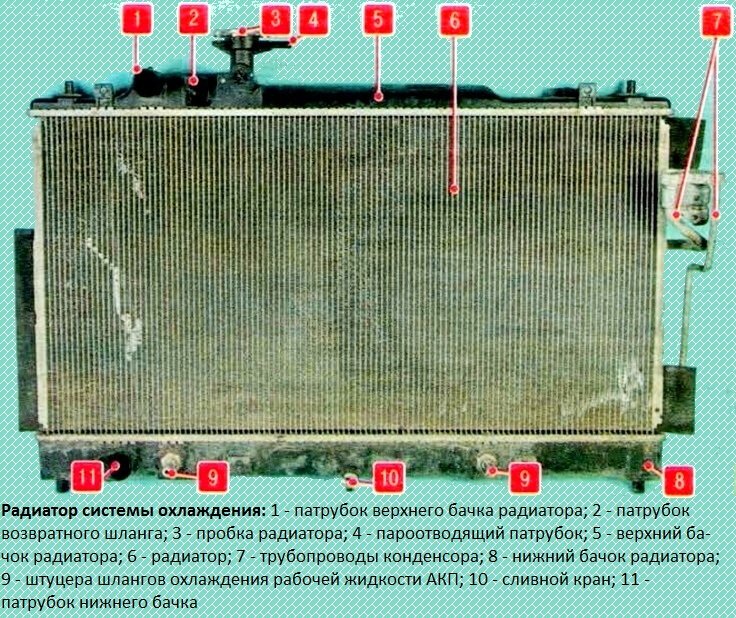 In the tanks there are inlet 11 and outlet 1 hose pipes to the engine water jacket, pipe 4 of the steam outlet hose, pipe 2 of the return hose and fitting 9 of the automatic transmission fluid cooling hose.

There are two valves installed in the radiator cap of the engine cooling system: inlet and outlet

It maintains an excess pressure of at least 0.127 MPa (1.27 kgf / cm2) in the system, increasing the temperature at which the coolant begins to boil and preventing intense vaporization

Unfortunately, if the valve is stuck in the closed position, overheating causes a significant excess of excess pressure - more than 0.15 MPa (1.5 kgf / cm2), which can lead to a rupture of the radiator or failure of one from hoses.

In turn, the jamming of the valve in the open position leads to premature boiling of the coolant. 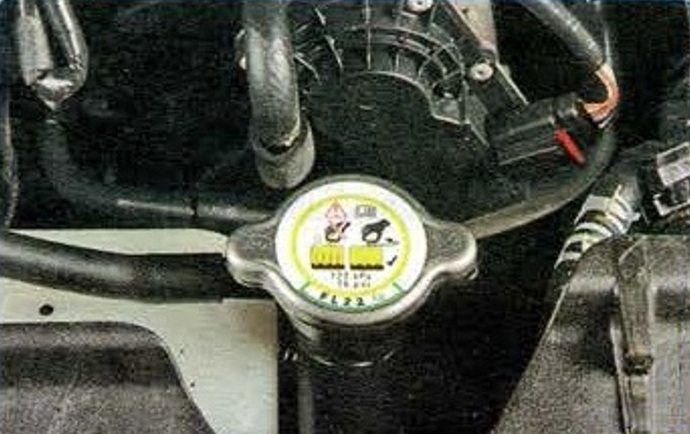 Rinse the radiator cap once a year with running water. If in doubt, replace the plug

If you remove the plug on an overheated engine and this action coincides with a thermal shock in time, then boiling of the liquid and the formation of air pockets in the cooling system will be guaranteed.

Once a year, blow out the radiator cells with a jet of compressed air (for example, from a compressor), directing the jet first towards the oncoming air flow, and then in its direction to remove dirt, insects and road debris from the surface of the radiator. This way you can partially restore the efficiency of the radiator. 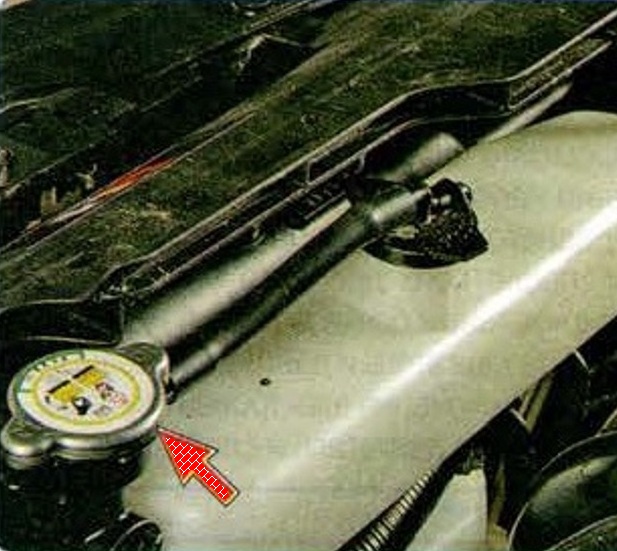 Expansion tank serves to compensate for the changing volume of the coolant depending on its temperature. The tank is made of translucent plastic 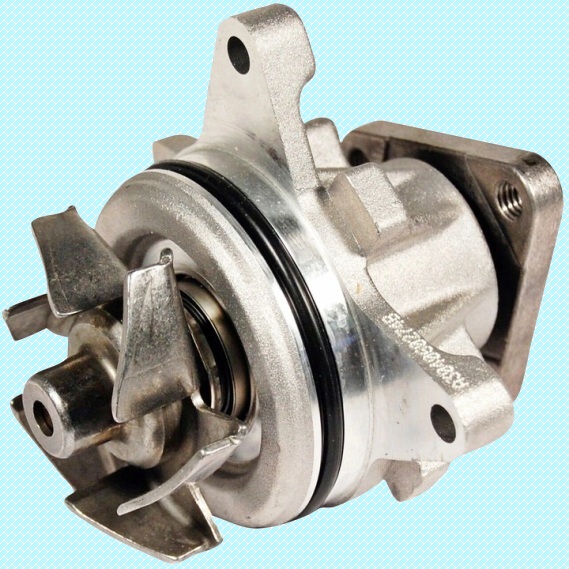 The pump has sealed bearings, no need in the replenishment of lubricants. The pump cannot be repaired, therefore, in case of failure (liquid leakage or bearing damage), it is replaced as an assembly. 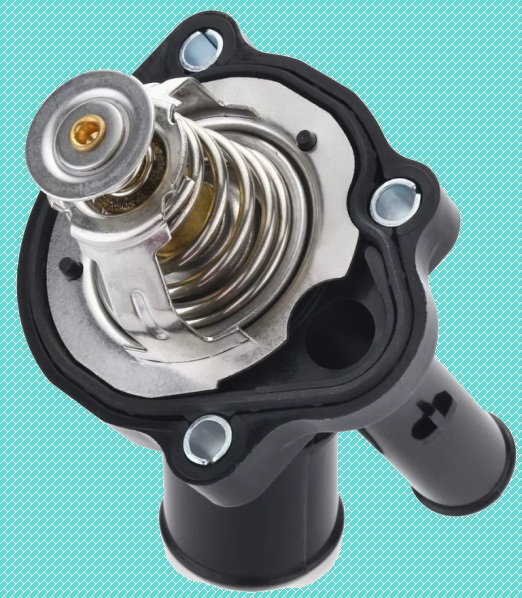 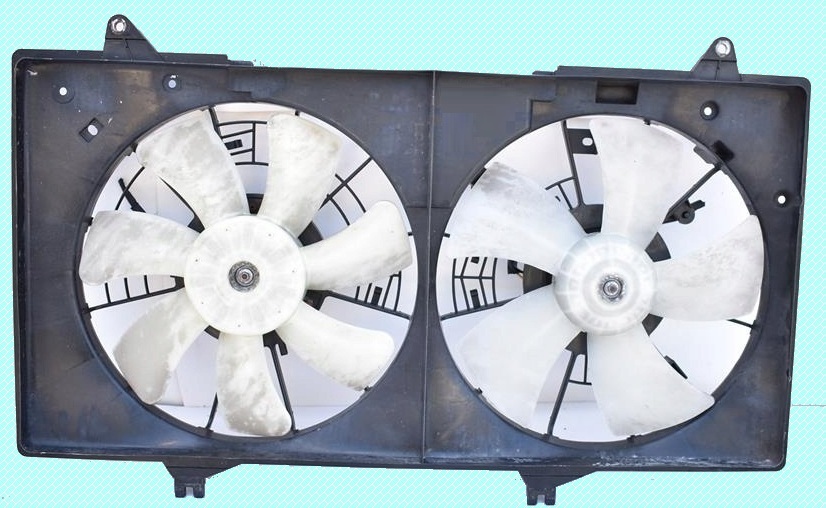 When the coolant temperature is below 75 ° C, the thermostat is completely closed and the liquid circulates through a small circuit, bypassing the radiator, which accelerates engine warm-up

At a temperature of about 80-84º C, the thermostat begins to open, and at 97 ° C it opens completely, circulating fluid through the radiator.

At the Mazda 6 car, two electric fans (main and additional) with plastic impellers (five- and seven-blade, respectively) are installed in the basic configuration, which provide air purge of the radiator at low vehicle speeds, mainly in urban areas or on mountain roads, when oncoming there is not enough airflow to cool the radiator.

To increase efficiency, the fans are installed in a plastic casing and attached to it at three points each

The casing, in turn, is attached at four points to the radiator (on top with two bolts, and on the bottom with stops inserted into the grooves of the brackets on the radiator supply tank)

The engine control unit controls the electric fans. Depending on the intensity of the thermal regime and the algorithm of the air conditioner, the electric fans can rotate at low and high speed

To change the speed of electric fans, the engine control unit changes their connection schemes from serial to parallel

Possible malfunctions of the cooling system and solutions

- the thermostat is faulty

- the core of the radiator is clogged

Wash the outside of the radiator core

- the radiator tubes, hoses and engine cooling jacket are clogged with scale or sludge

Flush the cooling system and fill with fresh coolant

- one or both electric fans do not turn on

- valve damage in the radiator cap

The engine does not warm up to operating temperature for a long time, the thermal regime is unstable while driving:

- the thermostat is faulty

- an excessive decrease in the coolant level due to a leak or damage to the cylinder head gasket, which causes the formation of vapor locks in the engine water jacket

- the sealing ring of the water pump housing is damaged

- the cylinder head bolts are poorly tightened (while the engine is parked on a cold engine, coolant leaks through the joint between the block head and the cylinder block; in addition, coolant may appear in the engine oil)

- the heater radiator is leaking

Checking the hoses and connections of the cooling system 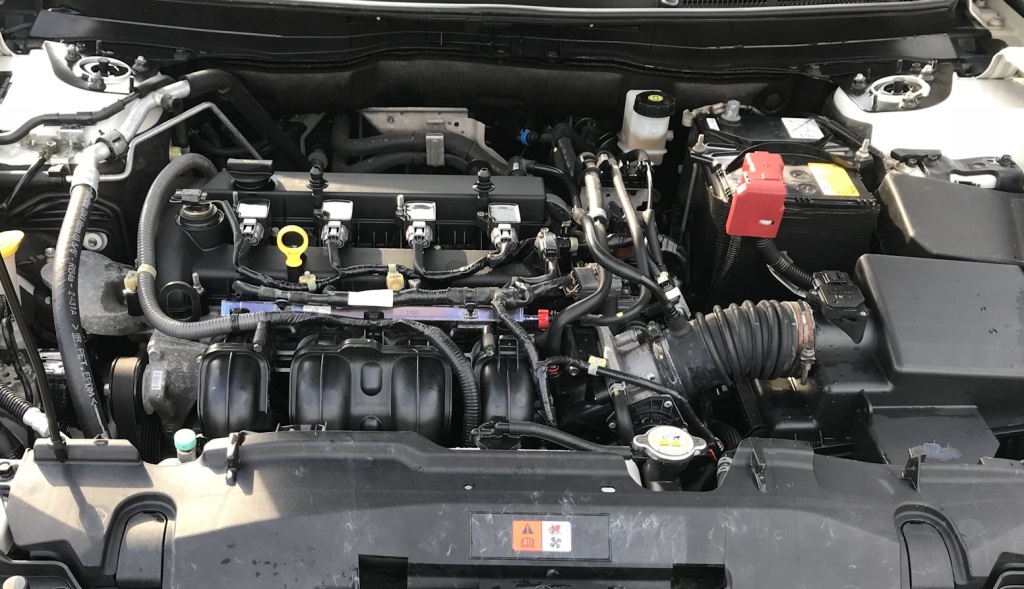 Open the hood and inspect the engine compartment

Find where the steam is coming from

When inspecting the engine, pay attention to the presence of coolantawns in the expansion tank 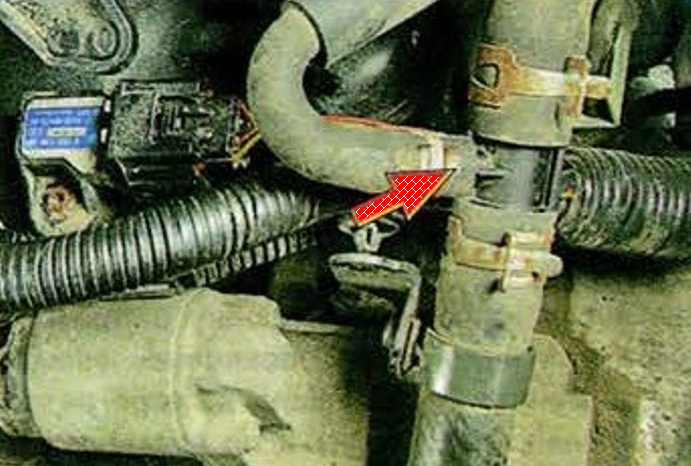 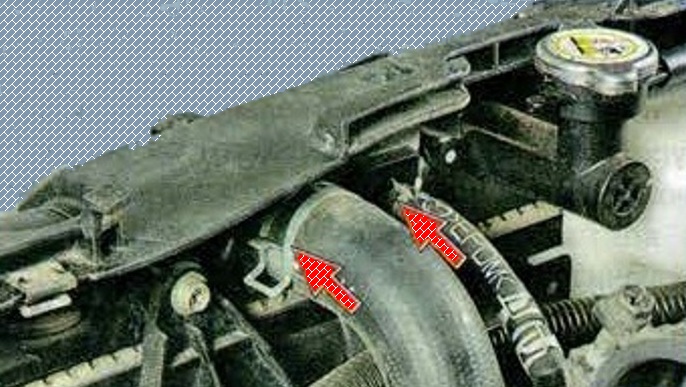 We pay attention to the integrity of the rubber hoses of the radiator, thermostat, water distribution pipes

Inspecting the connections to the outlet hose radiator 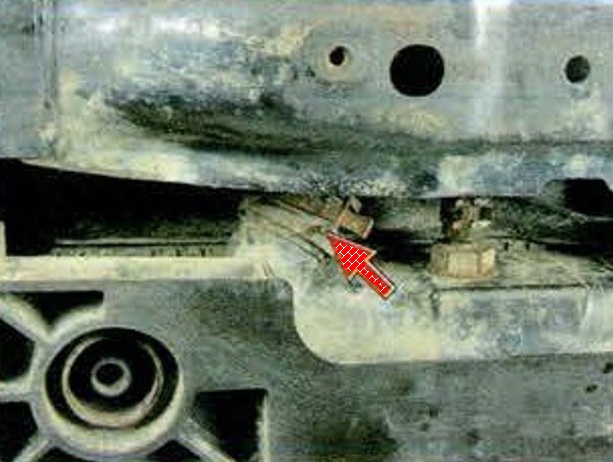 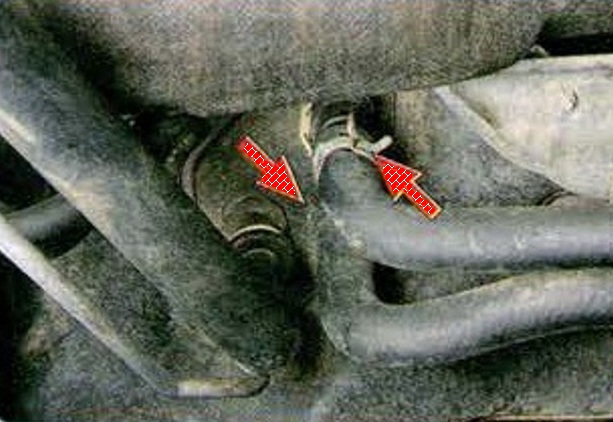 Inspecting the connection of the inlet hose 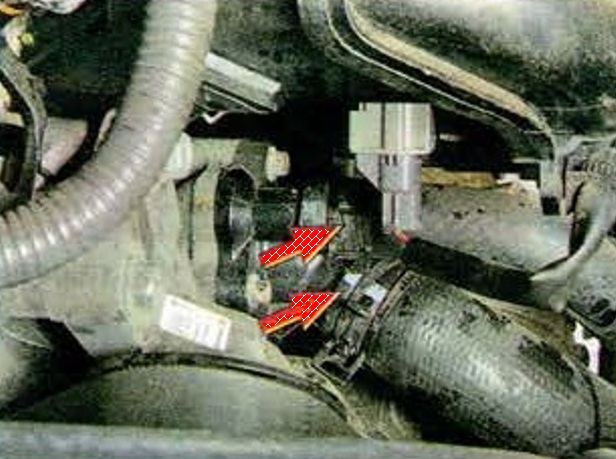 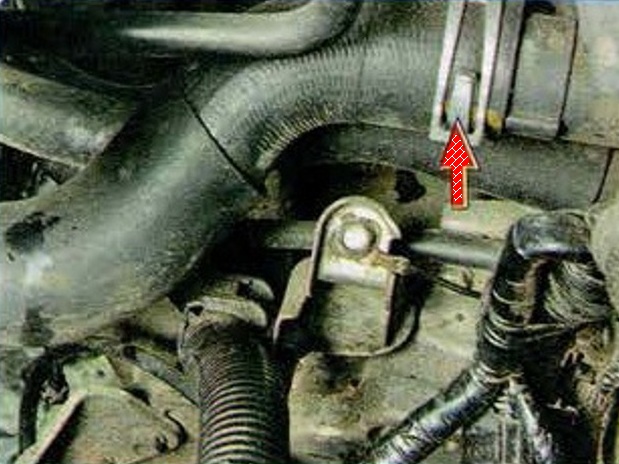 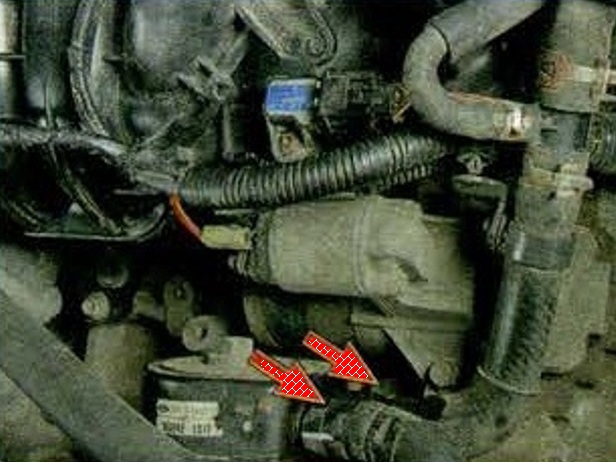 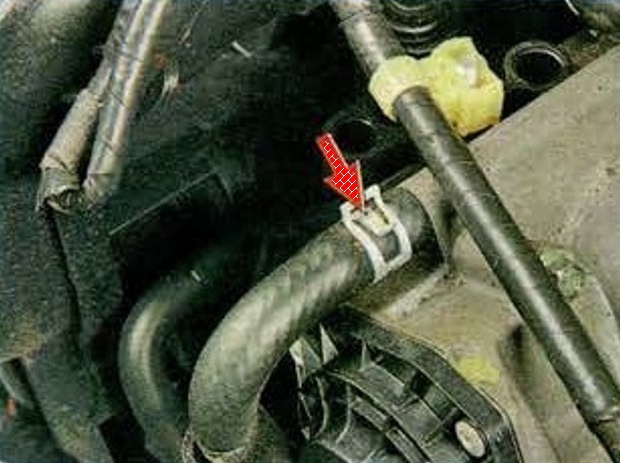 Inspecting the hose connections to the oil cooler 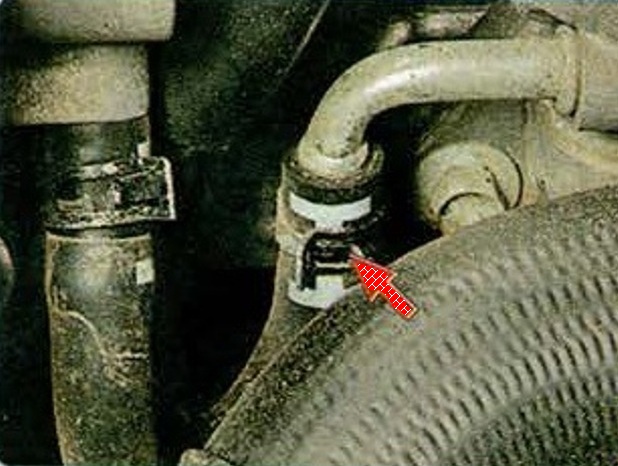 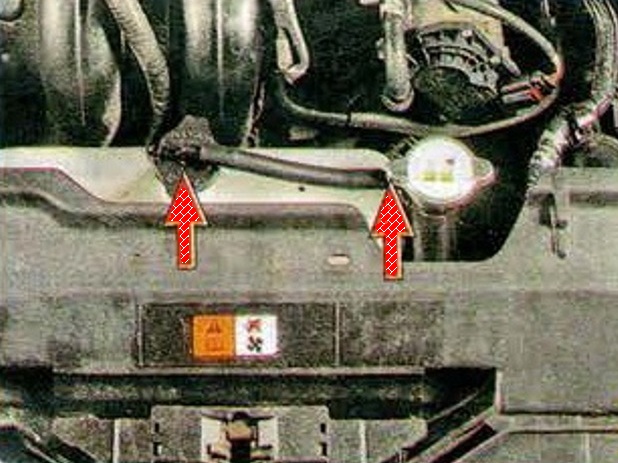