The front suspension is independent, MacPherson type, with triangular wishbones and anti-roll bar.

The basis of the suspension is a telescopic shock absorber strut, which allows the wheels to move up and down when driving through bumps and at the same time dampen body vibrations.

From below, the rack is attached with two bolts and nuts to the steering knuckle, and from above - with a nut through a rubber-metal support to the body. 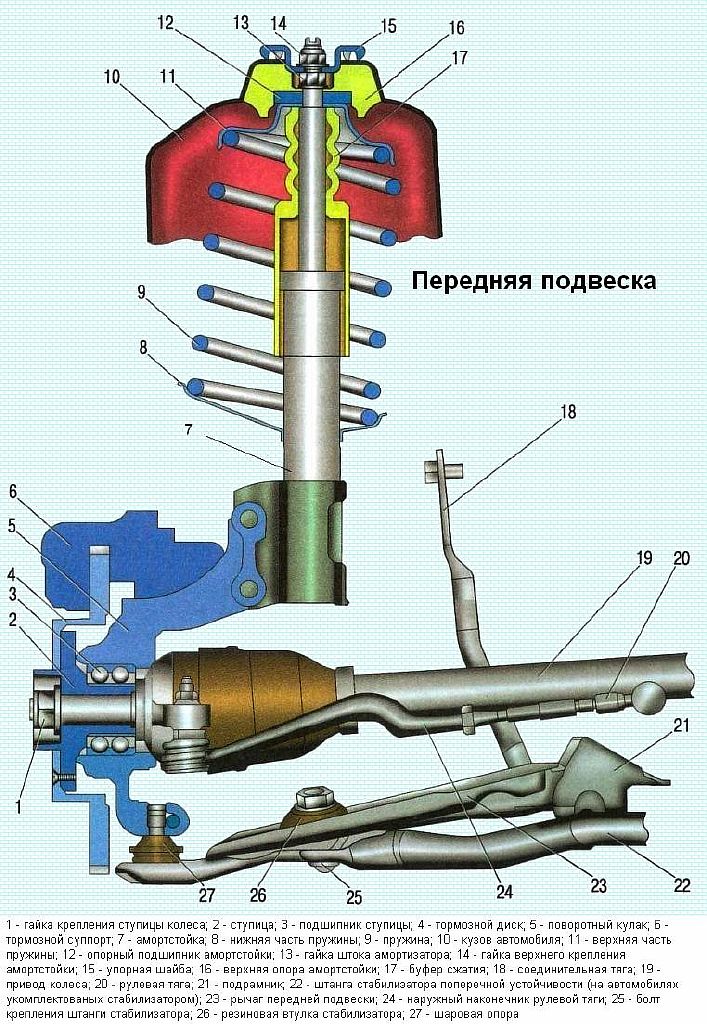 To effectively dampen body vibrations and improve vehicle handling and stability, a two-tube gas-filled shock absorber is installed in the strut body, which has higher characteristics than a conventional hydraulic shock absorber.

A compression stroke buffer is installed on the shock absorber rod, made integral with a protective cover.

From above, the spring rests against the upper support cup mounted on the shock absorber rod.

A thrust ball bearing is installed between the upper spring cup and the upper strut mount, allowing the strut body to rotate with the spring and the damper rod to remain stationary.

Braking and traction forces during vehicle movement are perceived by suspension arms connected through ball bearings to steering knuckles and through silent blocks with a subframe.

At the end of the bolt of the front attachment of the suspension arm to the subframe, a subframe bracket is fixed with a nut, the other end of which is attached to the body.

The ball joint pin is fastened with a clamp connection with a pinch bolt in the eye of the steering knuckle.

The inner rings are tightened through the hub with a nut on the threaded part of the shank of the wheel drive outer joint housing.

In operation, the bearing is not adjustable and does not require relubrication.

One of the two hub bearing shields is the front wheel speed sensor drive disk. The hub bearing nuts of both wheels are the same, with right-hand threads.

An anti-roll bar is installed on a car with a K4M engine.

The stabilizer is designed to increase lateral stability and reduce body roll angles by twisting the middle part of the bar when moving its ends.

The anti-roll bar is made of spring steel.

The bar in its middle part is attached to the subframe with brackets through rubber cushions.

Both ends of the stabilizer bar are connected to the suspension arms through screws with rubber and rubber-metal bushings.

The angle of longitudinal inclination of the axis of rotation of the front wheel and the angle of camber of the wheel are set by design and cannot be adjusted in operation.

These angles can only be checked on a special stand (at a service station) and compared with control values.

If the values ​​of the front wheel alignment angles do not correspond to the control values, it is necessary to check the condition of the front suspension elements.

Toe-in is adjusted by changing the length of the steering rods.

Possible malfunctions of the front suspension and solutions

Noise and knocking when driving:

Moving the car away from a straight line on a level road:

The angles of the front wheels are violated - Adjust the angles

Checking the technical condition of the front suspension

We install the car on a lift or an inspection ditch and hang out the front wheels.

Suspensions on rubber parts are not allowed:

On rubber-metal hinges are not allowed:

- signs of aging, cracks, one-sided swelling of the rubber array;

- separation of the rubber array from the armature. 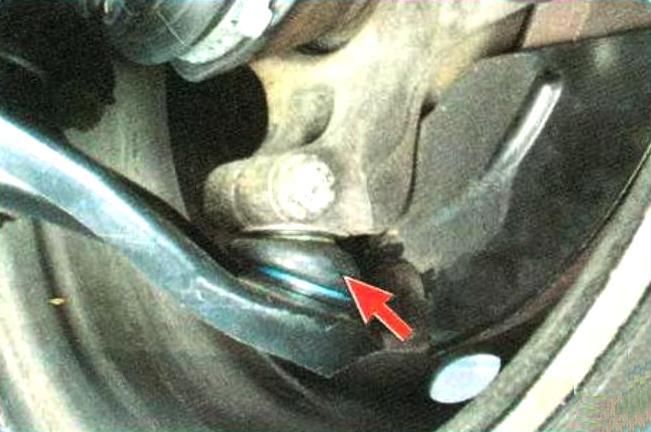 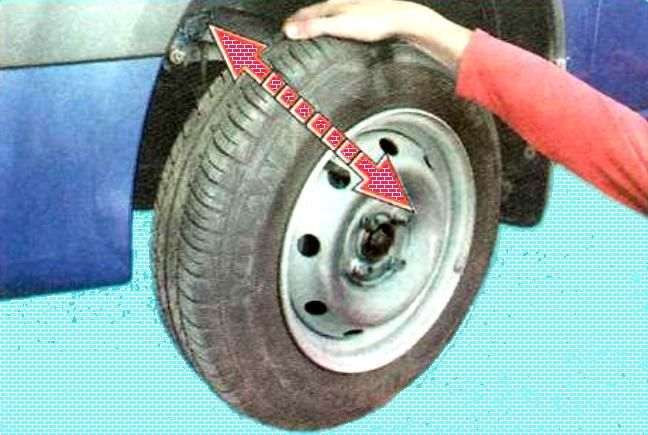 Checking the condition of the protective covers of the ball bearings.

If the covers are damaged, we replace the ball joints as an assembly.

Swinging the wheel in a vertical plane, we check the ball joints for backlash.

If there is play in the ball studs, replace the lower arm assembly.

When swinging a suspended wheel, it is difficult to distinguish play in the hub bearings and play in the ball bearings.

Have an assistant press the brake pedal; if in this case you feel a backlash, then the ball joints are faulty. 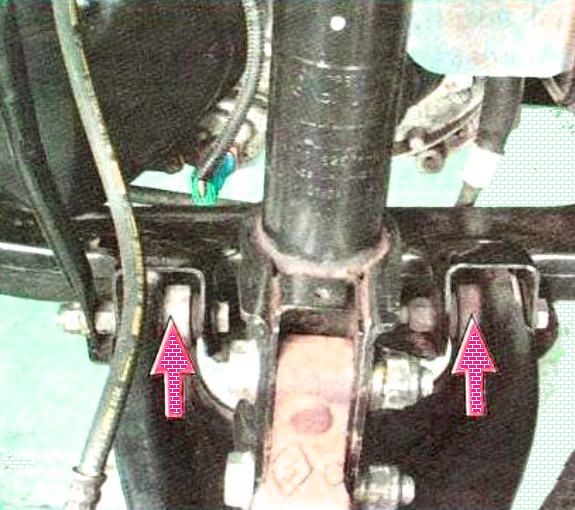 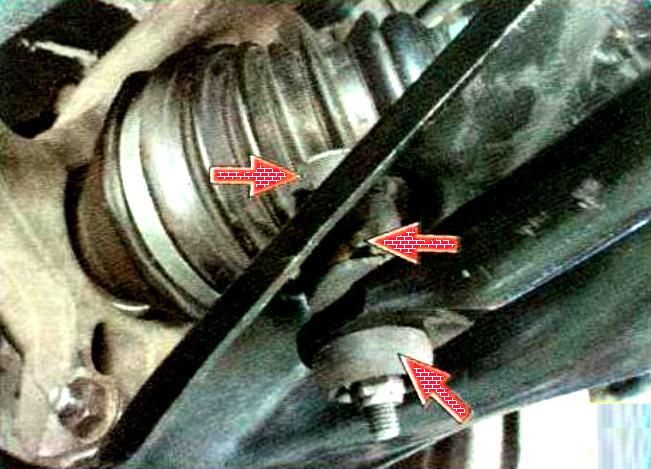 Check the rubber bushings and silent blocks in the places where the levers are attached to the body. 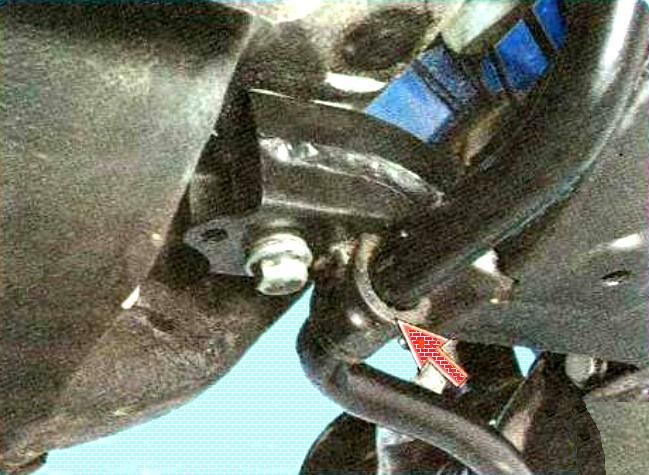 Check the condition of the stabilizer rubber pads in the places where the rod is attached to the subframe.

Checking the condition of the shock strut protective cover.