Removing the manual transmission of a Renault Sandero car

You will need keys for 13, 18 and a set of screwdrivers 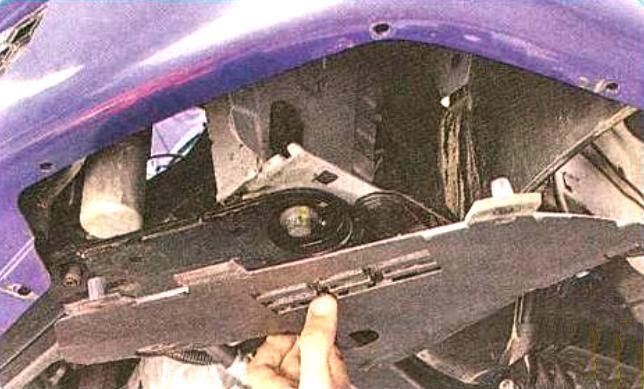 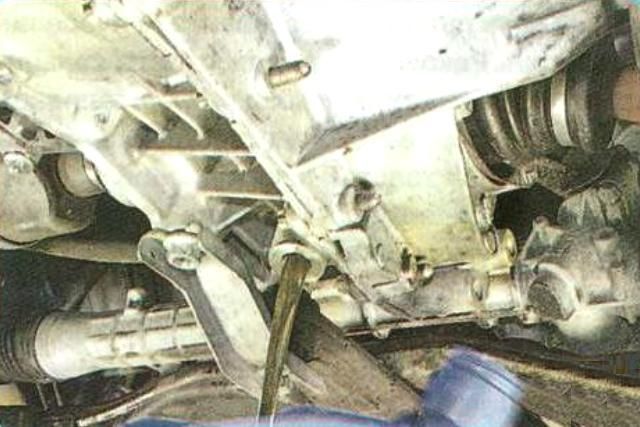 Remove the plastic gasket from the battery shelf

It is not necessary to remove the ECU and mounting block, it just makes it easier to access the mounting of the left power unit suspension mount. 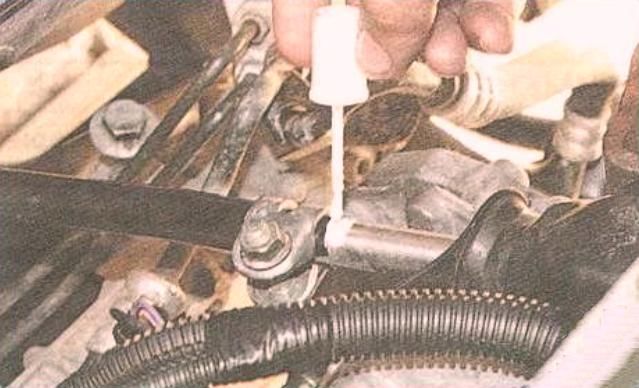 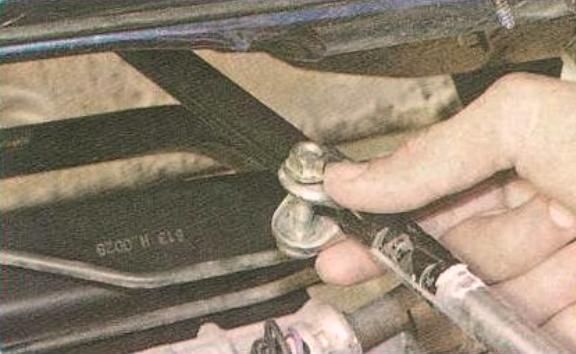 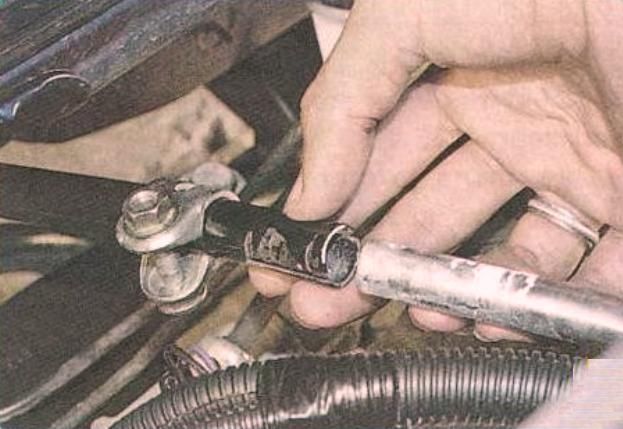 Move the clamp along the rod

Disconnecting the rod and lever 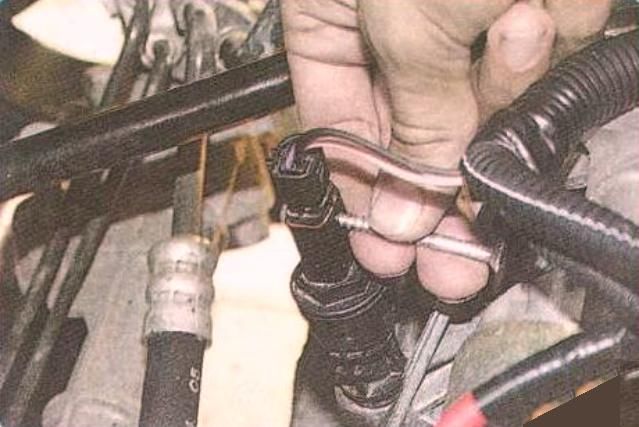 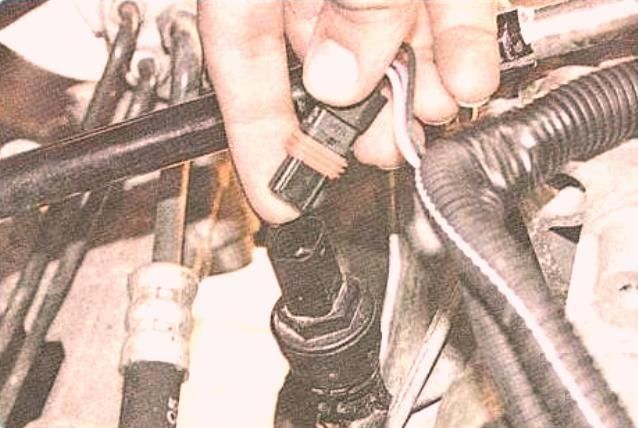 Disconnect the block from the sensor 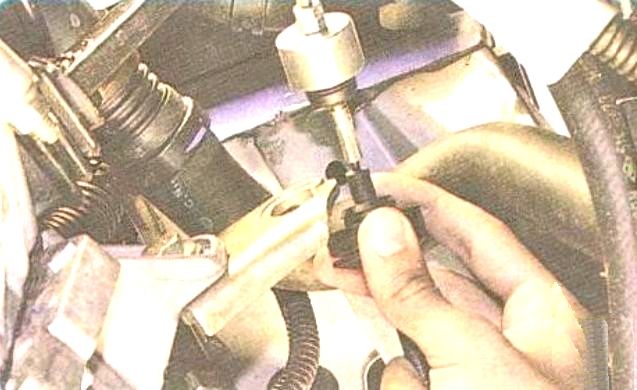 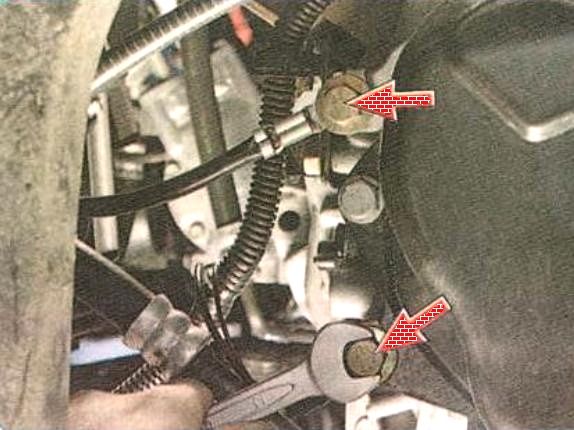 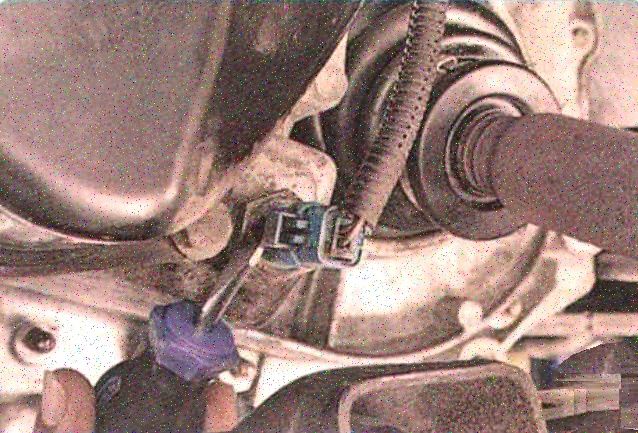 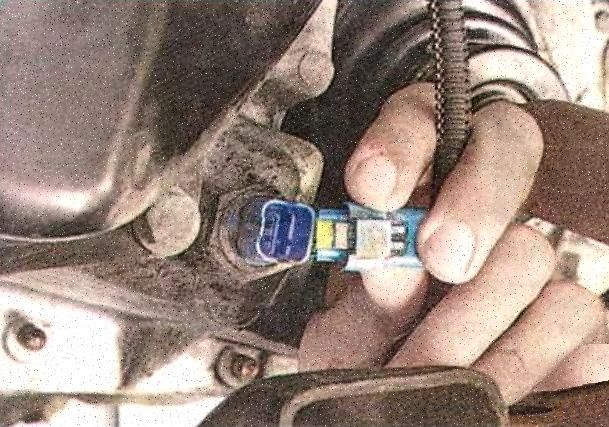 Disconnect the block from the switch 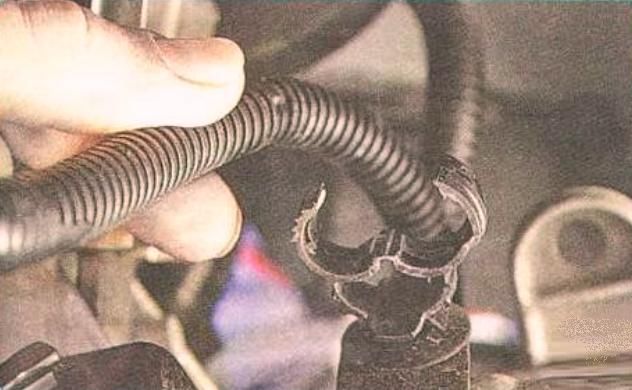 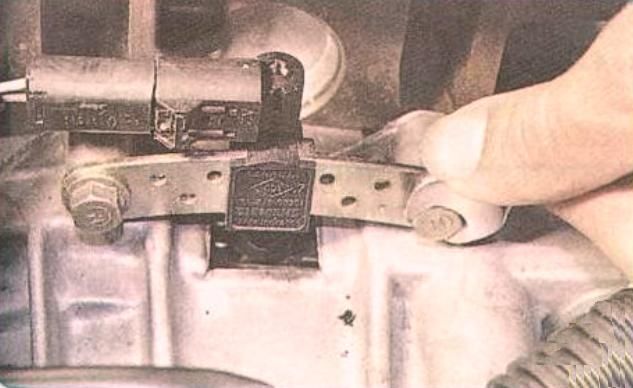 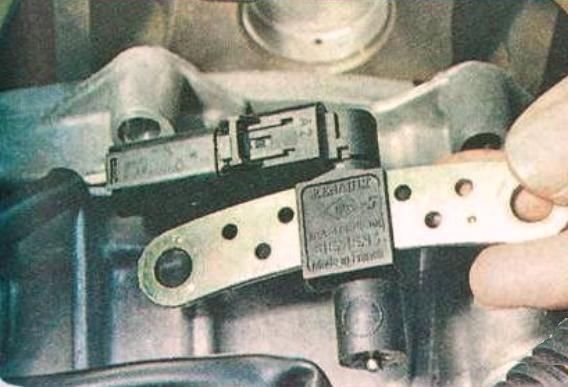 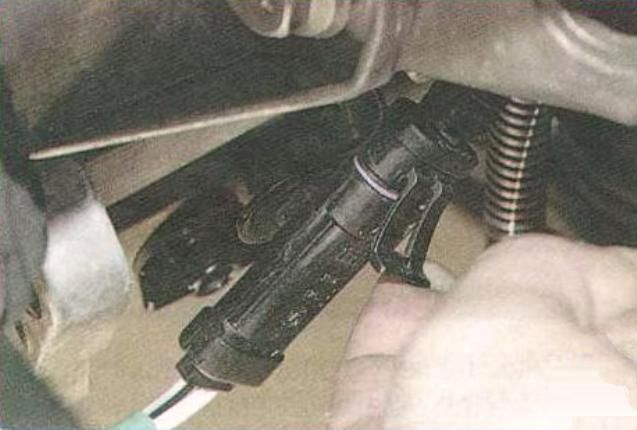 Remove the sensor together with the wiring harness to the side

We press the clamp of the oxygen concentration sensor wire block 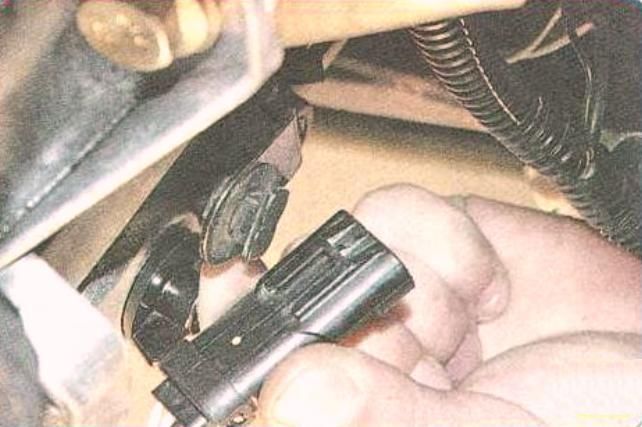 Remove the block of wires from the holder on the gearbox 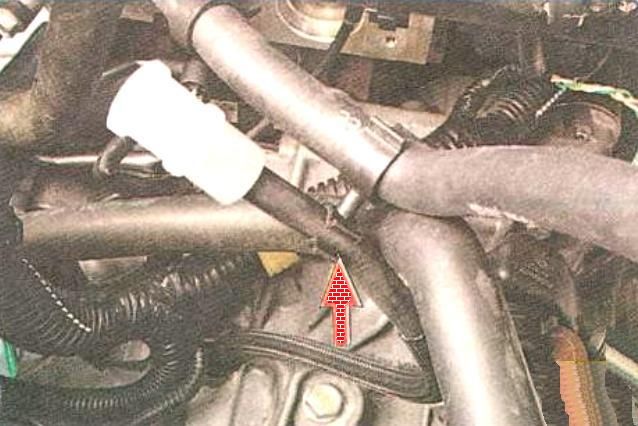 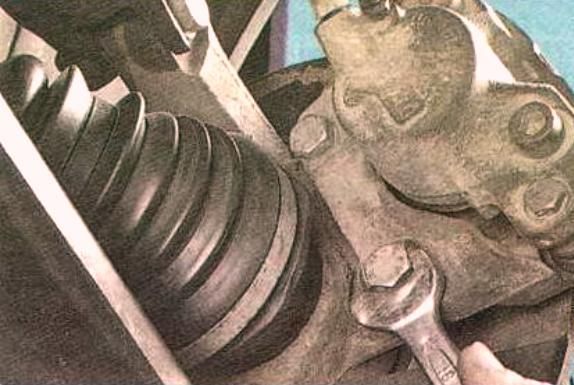 Remove the transmission breather hose from the holder

Remove the wheels from both sides of the car. 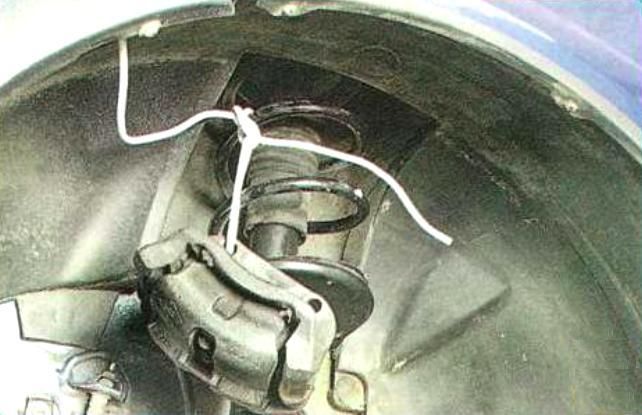 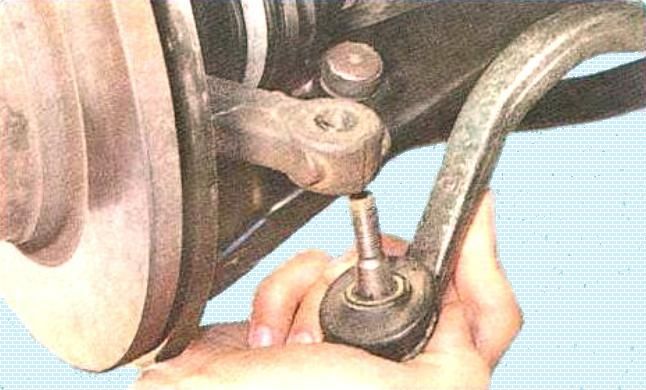 We take the calipers to the side without disconnecting the brake hoses from them, and attach the wire to the front suspension springs

Disconnect the tie rods from the steering knuckle levers 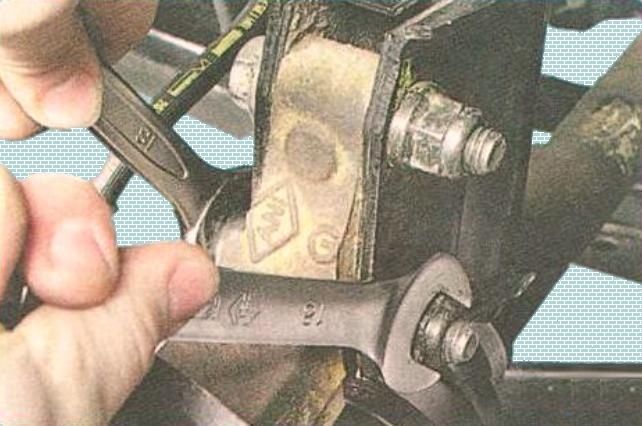 Disconnect the calipers, tie rods and shock struts in order to disconnect the internal hinges of the front wheel drives from the gearbox without removing the drives themselves.

When disconnecting the left front wheel drive inner joint from the gearbox, be careful not to drop the hinge rollers into the gearbox housing if they are not firmly seated on the trunnions three-pin hinge hub. 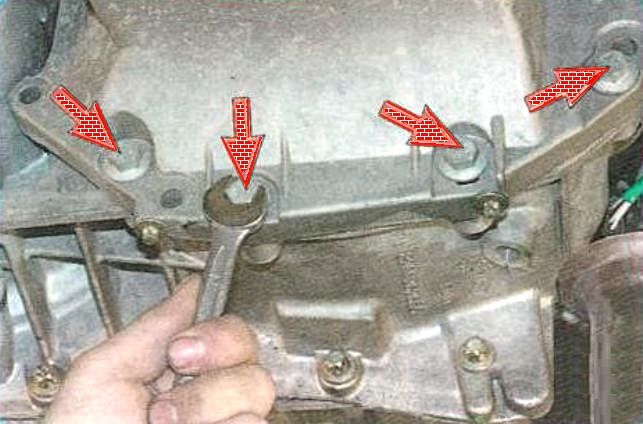 In the process of removing the subframe from the gearbox, disconnect the rear suspension support of the power unit 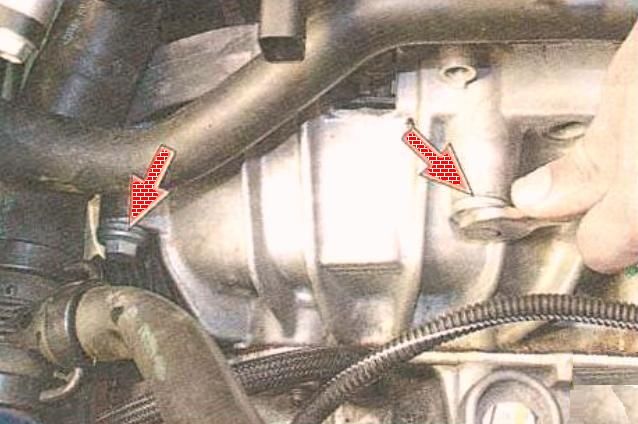 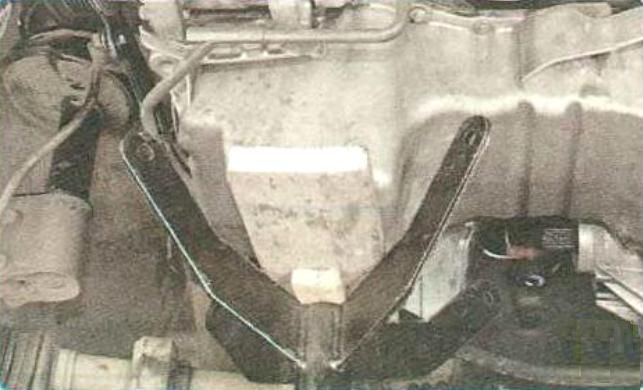 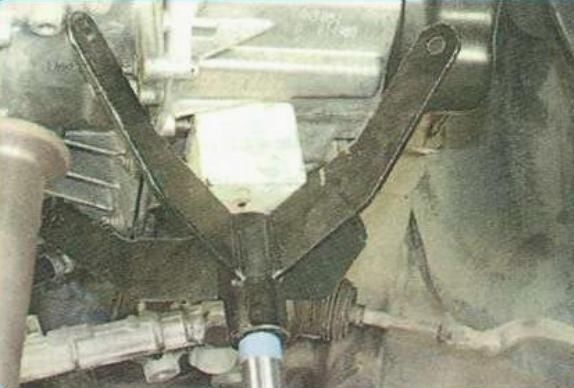 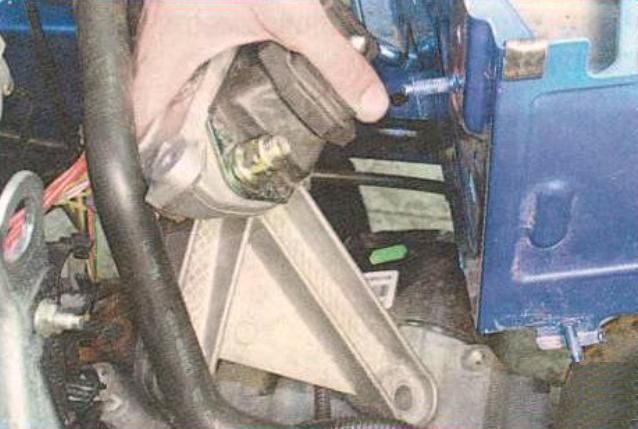 Install the stop under the gearbox

Remove the left suspension support of the power unit 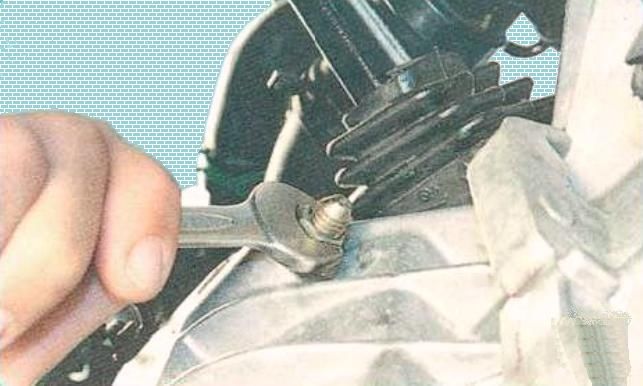 Move the box pgears back until the clutch housing studs come out of the holes in the cylinder block.

In this case, the input shaft of the box should come out of the hub of the clutch disc 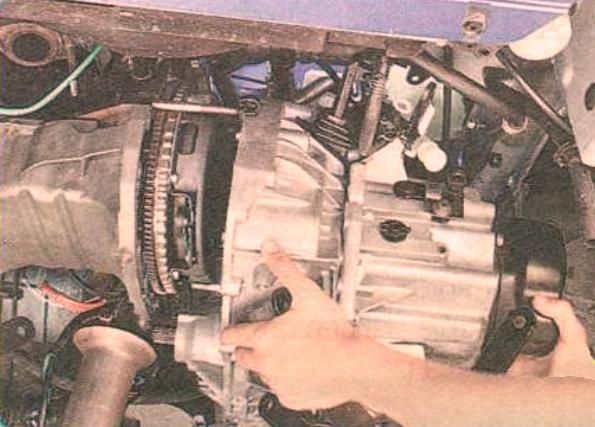 We move the gearbox as far back as possible, remove the support from under it and, tilting the back of the gearbox down, remove it from the car.

When removing the gearbox, do not rest the end of the input shaft on the petals of the diaphragm spring of the basket, so as not to deform them.

Install the gearbox in reverse order

Before installing the gearbox, lubricate the input shaft splines and the outer part of the clutch release bearing guide bushing with a thin layer of refractory grease.

Check with a mandrel how the clutch disc is centered.

After installation and assembly, fill the gearbox with oil.