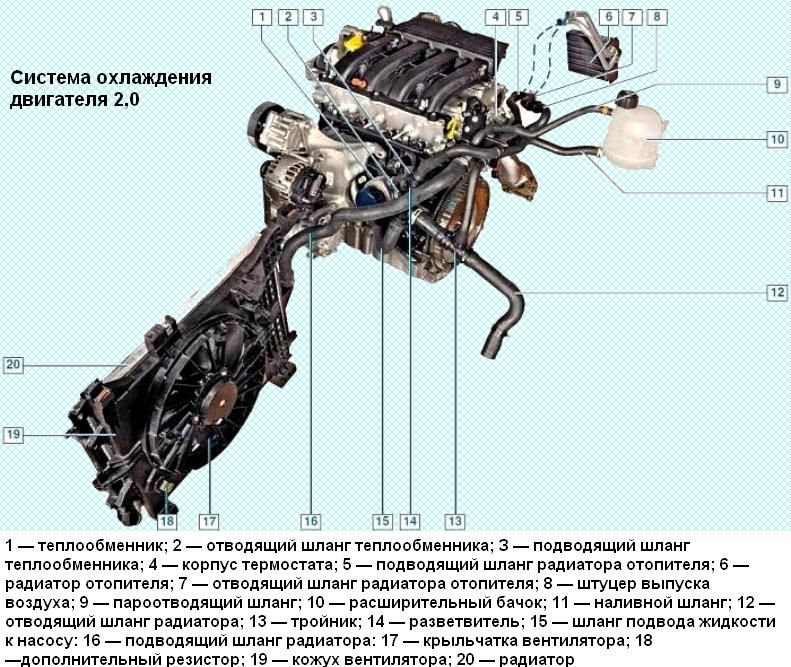 A heater radiator located in the passenger compartment and a heat exchanger (2.0 engine) are connected to the cooling system.

The system is filled with coolant through the throat of the expansion tank. 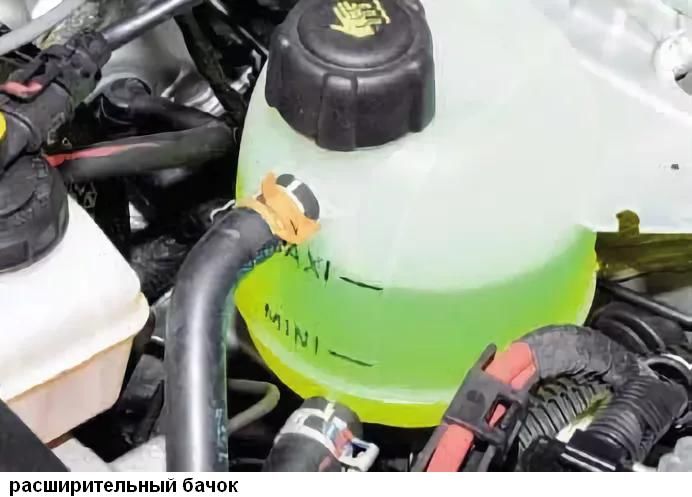 The expansion tank, fixed in the engine compartment on the left side of the mudguard, is made of translucent plastic, which allows you to visually check the coolant level.

There are MAX and MIN marks on the wall of the expansion tank, between which the liquid level should be on a cold engine.

A steam outlet hose is connected to the upper connection of the tank, which connects the tank to the thermostat lid. 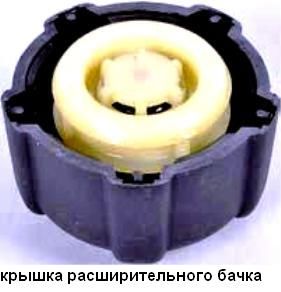 The tightness of the cooling system is ensured by the inlet and outlet valves in the expansion tank cap.

The exhaust valve maintains a higher than atmospheric pressure in the system when the engine is hot.

Due to this, the boiling point of the liquid rises, and vapor losses are reduced.

The inlet valve opens when the system pressure drops on a cooling engine.

If the cover is lost, it cannot be replaced with a sealed cover without valves, even of a suitable size and thread - this will lead to an unacceptable increase in pressure in the cooling system (on a hot engine) and, as a result, to leakage of coolant from under the hoses.

The circulation of fluid in the cooling system is provided by a coolant pump located on the right end of the cylinder block. Coolant pump - vane, centrifugal type.

The pump consists of a housing, a bearing unit with a seal, an impeller and a drive pulley. 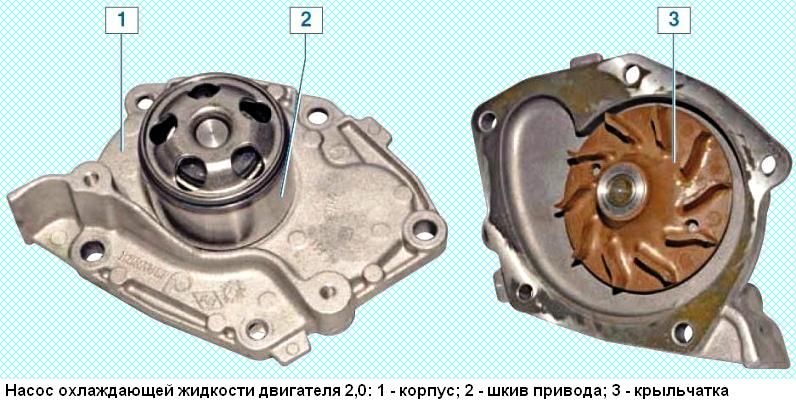 The liquid enters the pump through its inlet pipe located on the front wall of the cylinder block. 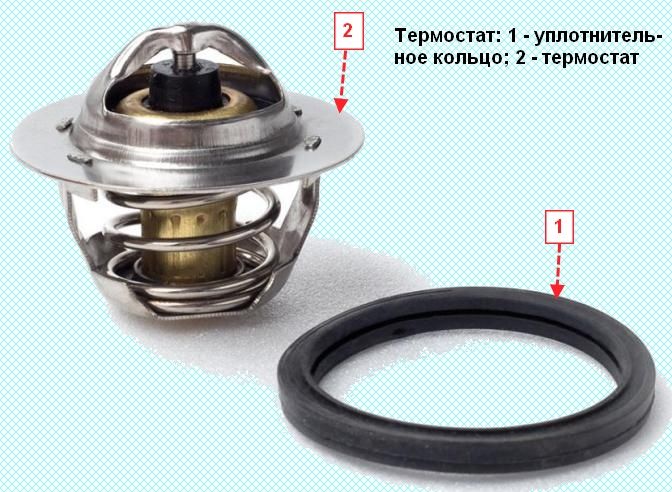 The thermostat, located in the housing and closed with a lid, helps to accelerate engine warm-up, automatically maintain its thermal regime within specified limits and regulates the amount of fluid passing through the radiator of the cooling system.

Inside the thermostat there is a metal cylinder with a thermosensitive filler (toe).

The container is hermetically sealed with a rubber insert.

When heated, the filler melts and expands, squeezing the insert.

The rubber insert deforms, causing the diaphragm to flex and move the stem that controls the thermostat valve. 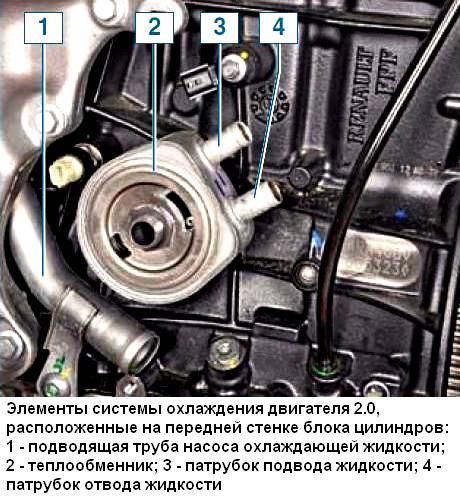 In this case, all the liquid through the thermostat housing enters the heater radiator, bypassing the radiator of the cooling system, and returns to the pump - a small circle of circulation.

Through the heater radiator and heat exchanger (engine 2.0), the liquid circulates constantly and does not depend on the position of the thermostat valve.

As the engine warms up, at a fluid temperature of about 89˚C, the thermostat valve begins to move, letting the fluid flow into the radiator of the cooling system.

At a temperature of 95 ± 2 ° C, the thermostat valve opens completely, and the liquid enters the radiator of the cooling system, where it gives off heat to the ambient air.

The movement of fluid through the engine cooling jacket and the cooling system radiator forms a large circulation circle. 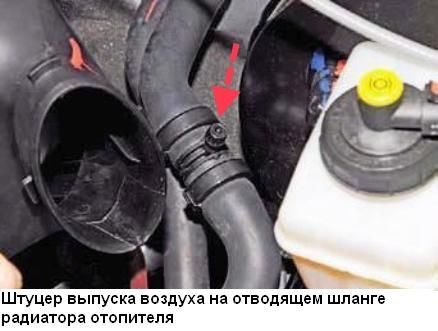 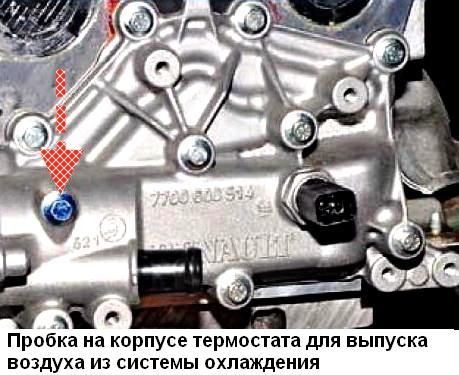 There is a fitting on the outlet hose of the heater radiator, and on the thermostat housing there is a screw plug to release air from the cooling system when it is filled with liquid.

The connection on the hose is closed with a cap. On the 2.0 engine, using two hoses connected to the nozzles of a plastic splitter (also connecting the inlet hose, the radiator outlet hose and the fluid supply hose to the pump pipe), fluid is circulated through the engine heat exchanger. 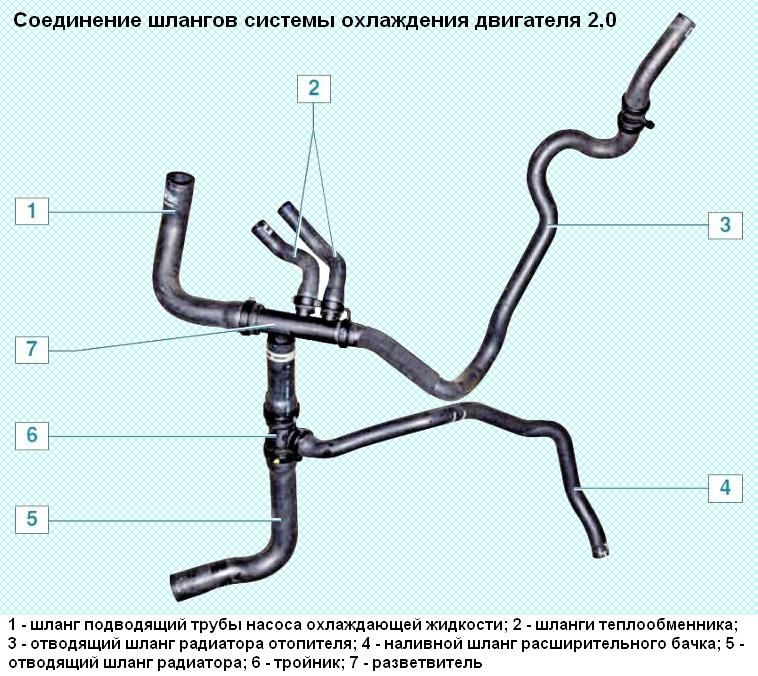 The cooling system radiator is attached to the fan shroud. 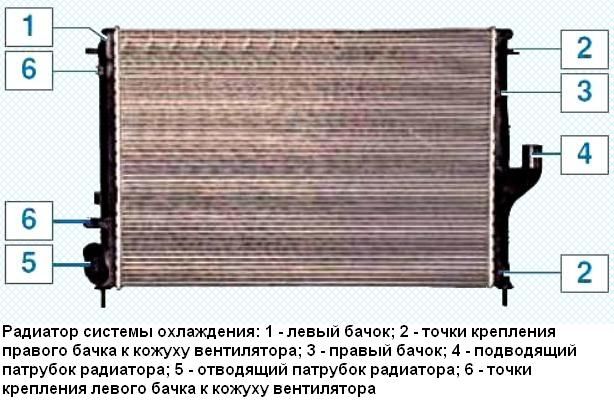 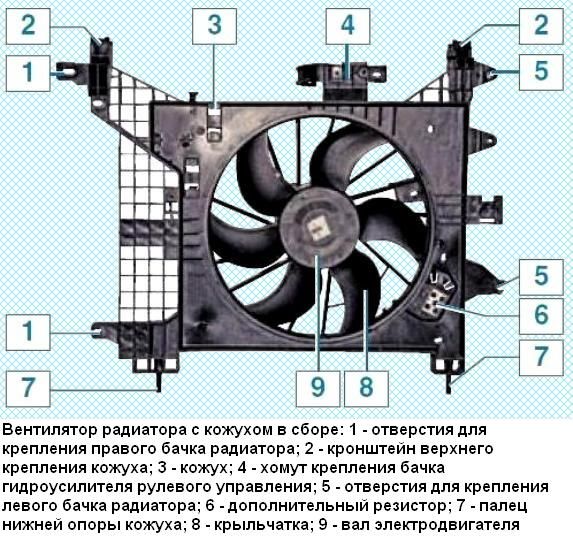 There is no drain hole in the radiator.

The electric fan is installed in a casing, which is attached from the top to the upper cross member of the radiator frame, and from the bottom to the front suspension subframe.

With an increase in the temperature of the coolant, the fan is turned on by a command from the electronic control unit (ECU) of the engine through a relay. 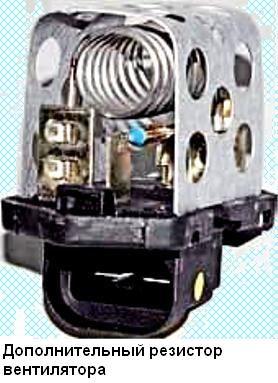 An additional resistor is installed on the fan casing.

When the coolant temperature reaches 99 ° C, the ECU turns on the fan motor through an additional resistor, and the fan rotates at low speed.

When the temperature of the liquid drops to 96 ° C, the fan turns off.

When the coolant temperature reaches 102 ° C, the ECU turns on the electric motor, bypassing the resistor, and the fan rotates at high speed.

If the coolant temperature exceeds 118 ° C, the engine overheating warning lamp in the instrument cluster comes on. 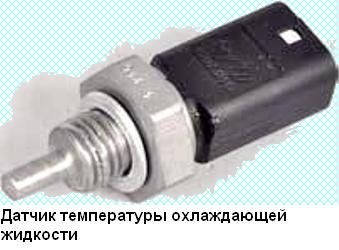 The coolant temperature sensor is screwed into the threaded hole in the thermostat housing.

The sensor provides information to the temperature gauge in the instrument cluster, the engine overheating indicator and the electronic engine control system.

Possible malfunctions of the cooling system, their causes and remedies

The engine gets very hot:

- Reduced level of coolant in the expansion tank

- The radiator pipes, hoses and engine cooling hose are clogged with scale and sludge

Flush the cooling system and refill with fresh coolant

- Email The fan does not turn on due to an open circuit or failure of a sensor, relay or fan motor

- Damage to the valve in the plug of the expansion tank (the valve is constantly open, due to which the system is under atmospheric pressure)

The engine overheats, cold air comes from the heater:

- Excessive decrease in coolant level due to leakage or damage to the cylinder head gasket, which causes the formation of vapor lock in the water jacket of the engine

The engine does not warm up to operating temperature for a long time, the thermal regime is unstable while driving:

Constant decrease in the coolant level in the expansion tank:

- The expansion tank is leaking

- Coolant leaks through leaking connections of pipes and hoses

- The cylinder head mounting bolts are not tightened enough (during long-term parking on a cold engine, a coolant leak appears at the junction of the cylinder head with the cylinder block; in addition, traces of coolant may appear in the engine oil)

Tighten the cylinder head bolts to the correct torque