We remove the fuel module to replace the fuel filter, as well as in case of malfunction of the module parts.

The module structurally consists of an electric pump, a fuel level sensor, a pressure regulator and a coarse filter.

Faults in which the fuel pump module is repaired:

- malfunction of the pressure regulator;

- failure of the fuel pump;

- clogging or damage to the coarse filter;

- Failure or incorrect operation of the fuel gauge sensor.

Symptoms of a fuel pump malfunction are a decrease in the power and dynamics of the car, dips in acceleration mode, unstable engine operation in idling mode.

A sign of deterioration in fuel pump performance is a "howl" or a constant unpleasant hum, with excessive wear on the pump part due to operation with poor, unrefined gasoline.

The smallest mechanical impurities contained in such fuel contribute to the wear of the rubbing surfaces of the pump part.

The reason for the rapid wear of the pump is also driving with a low level of fuel in the tank, with the reserve fuel indicator light on.

Because the electric pump is cooled by the fuel in the tank.

To remove the fuel pump module:

We reduce the fuel pressure, as described in the article - "Replacing the additional Renault Duster fuel filter" 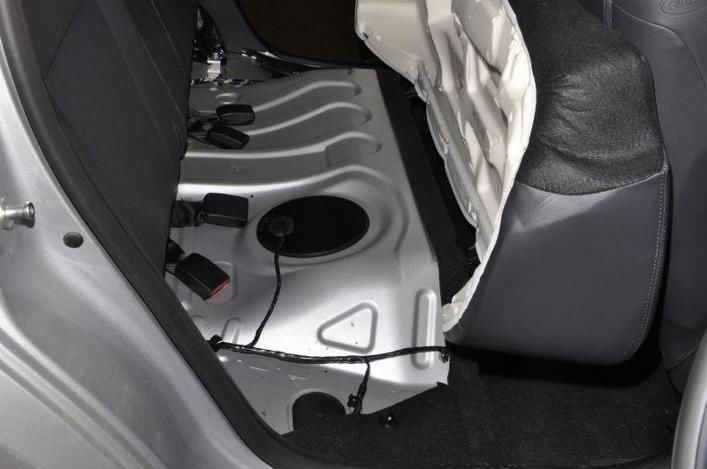 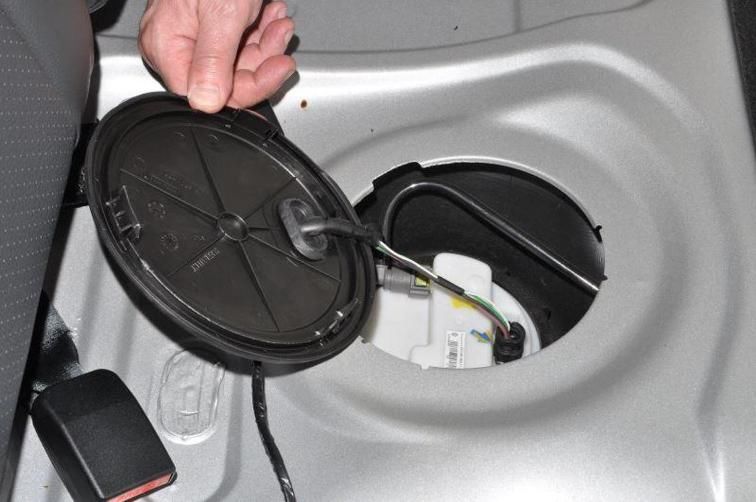 In the car, recline the rear seat cushion

Pry off with a flathead screwdriver and pry up the fuel filler cap. 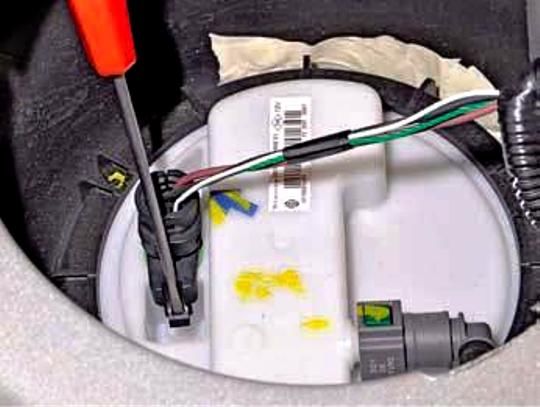 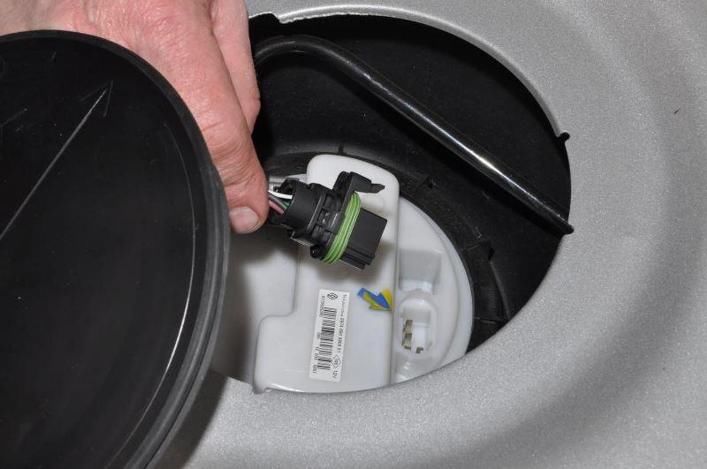 Disconnect the block from the module connector 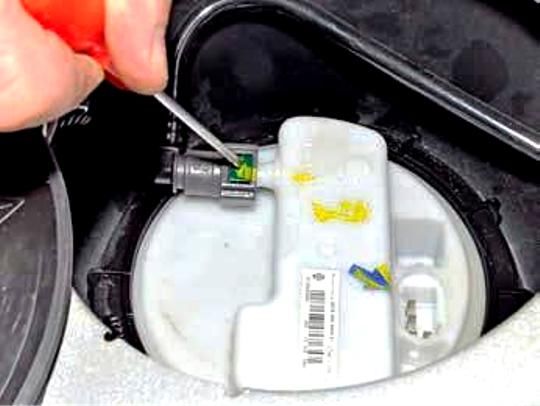 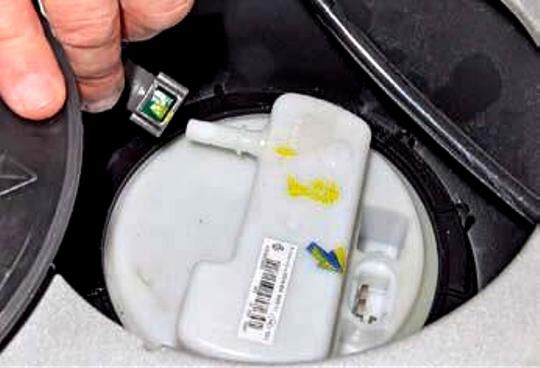 Press on the latch of the fuel pipe tip

Disconnect the tip from the fitting of the module cover 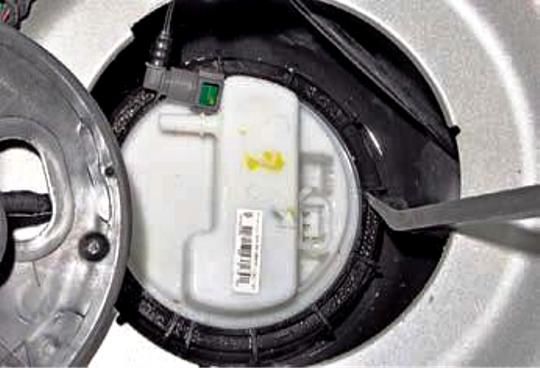 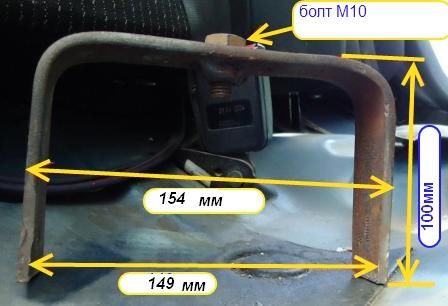 If it doesn’t work out, we make a bracket from a metal bar in size 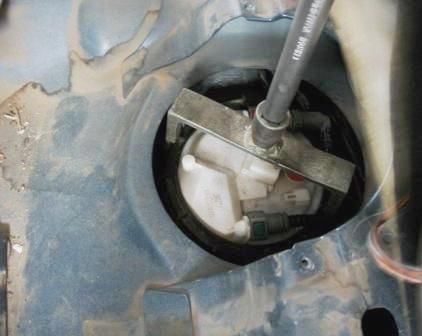 Unscrew the clamping ring and remove it 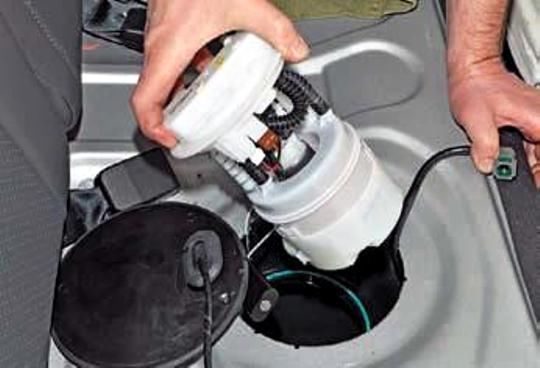 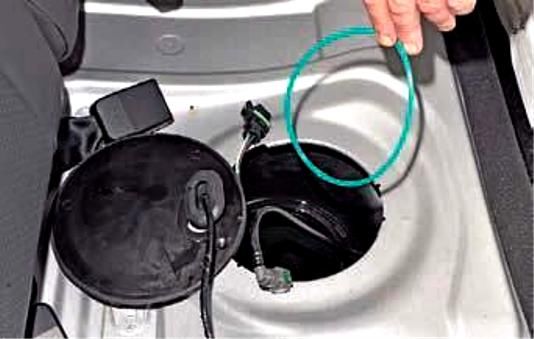 Carefully remove the fuel module from the tank, removing the float of the level sensor from the hole in the tank 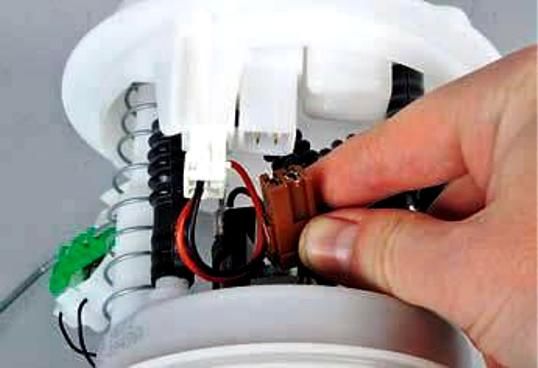 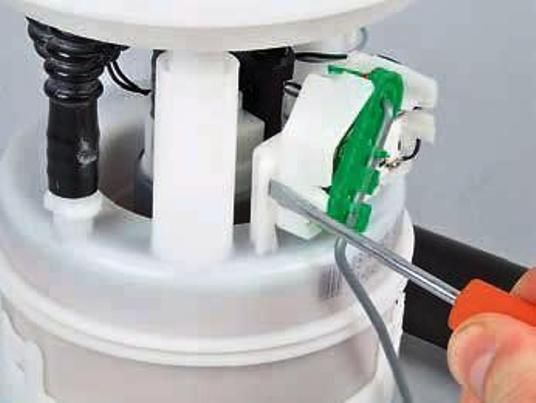 Having poured out the remaining fuel from the fuel module, disconnect the wiring block of the fuel gauge sensor

We release the clamp of the fuel gauge sensor 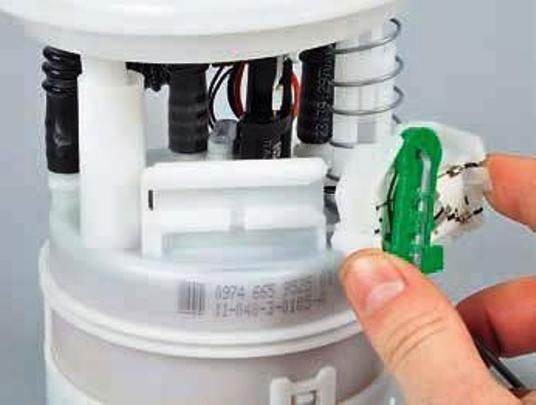 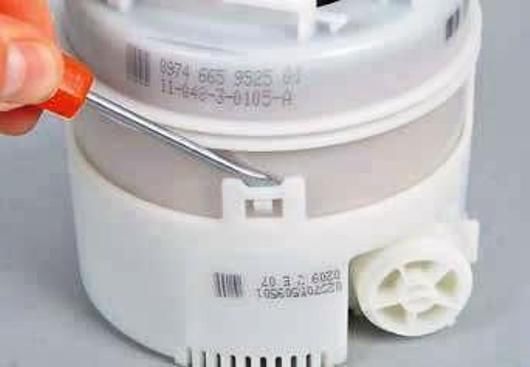 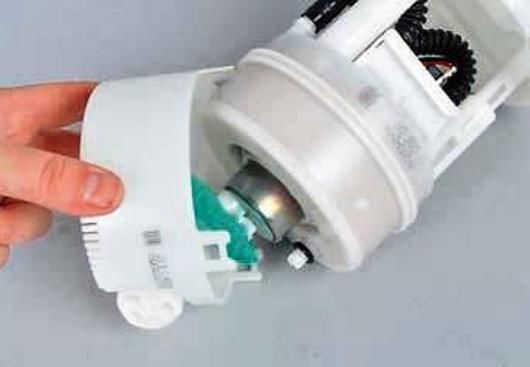 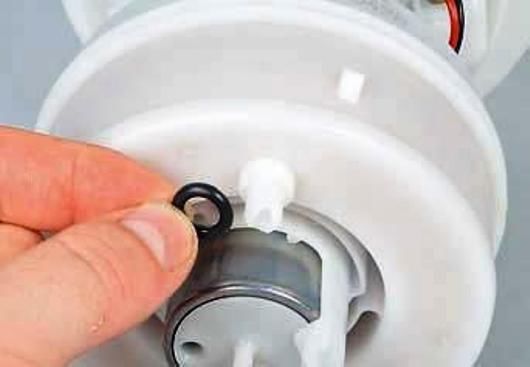 Remove the glass from the filter housing 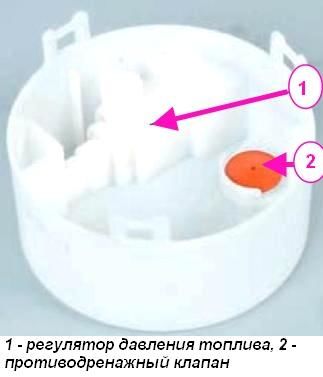 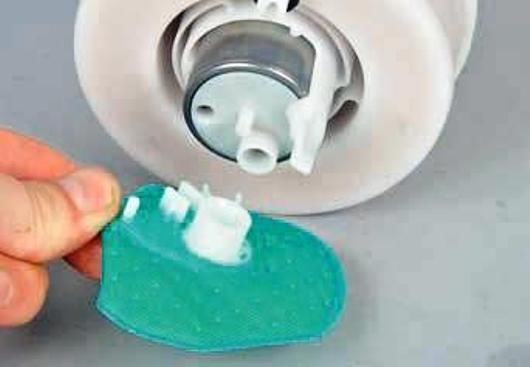 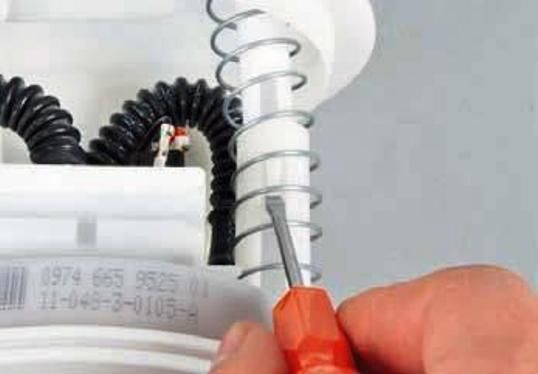 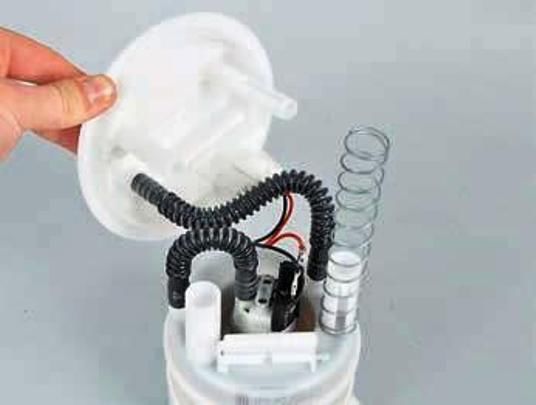 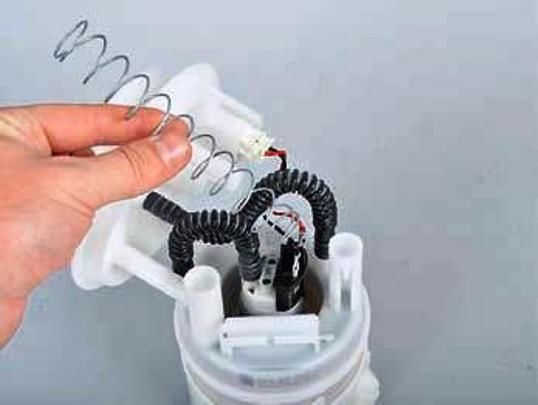 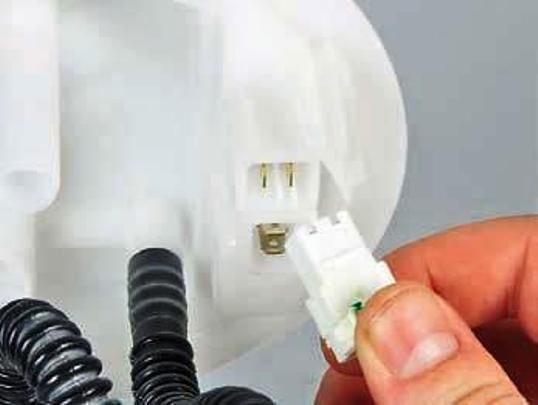 Remove the spring from the guide

Disconnect the fuel pump wiring harness from the connector on the inside of the fuel module cover. 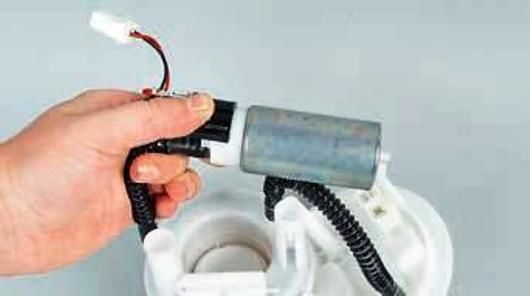 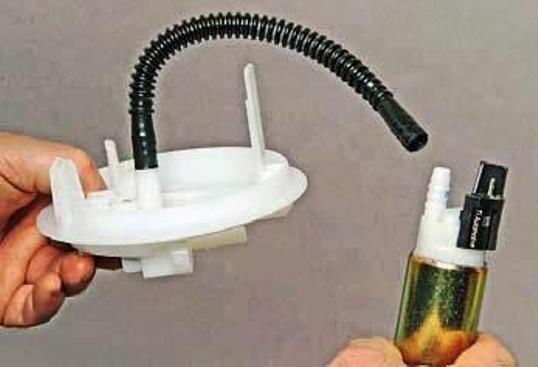 Remove the fuel pump from the fuel filter housing

Remove the tube from the pump nozzle 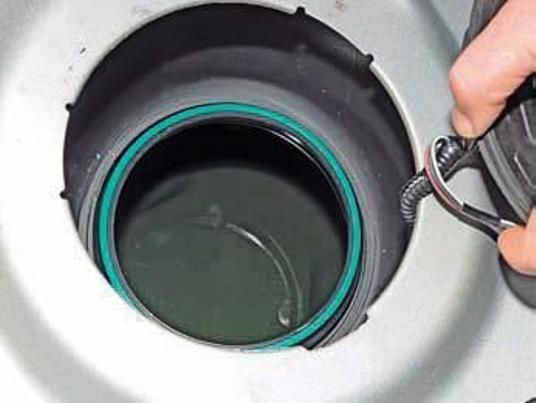 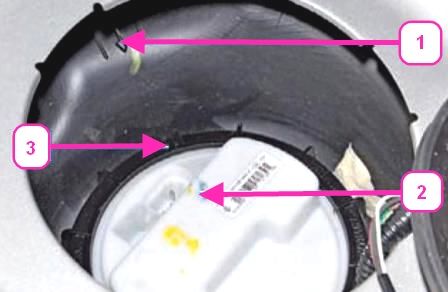 We install all the parts in the reverse order.

During the installation of the module, we control the correct location of the sealing ring.

Installing the module in the tank

Then we turn the clamping ring to the position where arrow 3 on the ring is opposite arrows 1 and 2.

We put the tip of the fuel pipe on the fitting of the module cover until the latches click.

After installing the module, turn on the ignition and check the tightness of the connections. 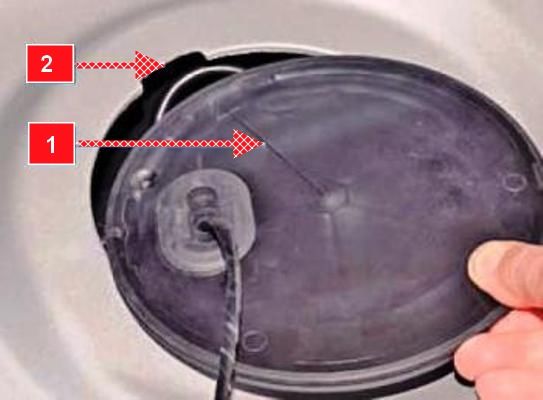 When installing the hatch cover, orient it so that arrow 1 on the cover is opposite groove 2.