At the factory, Hyundai Solaris vehicles are equipped with a maintenance-free battery made using calcium, with a nominal voltage of 12 V, with a capacity of 60 Ah. 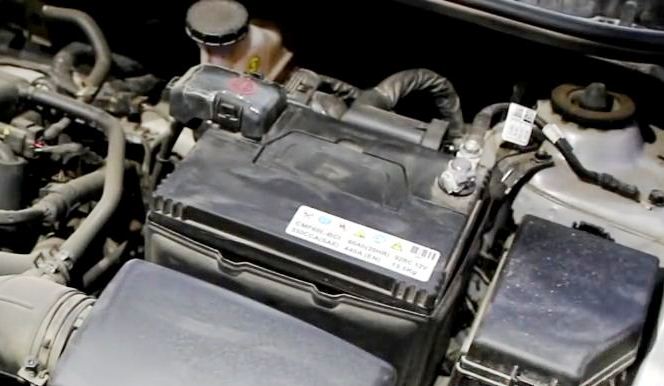 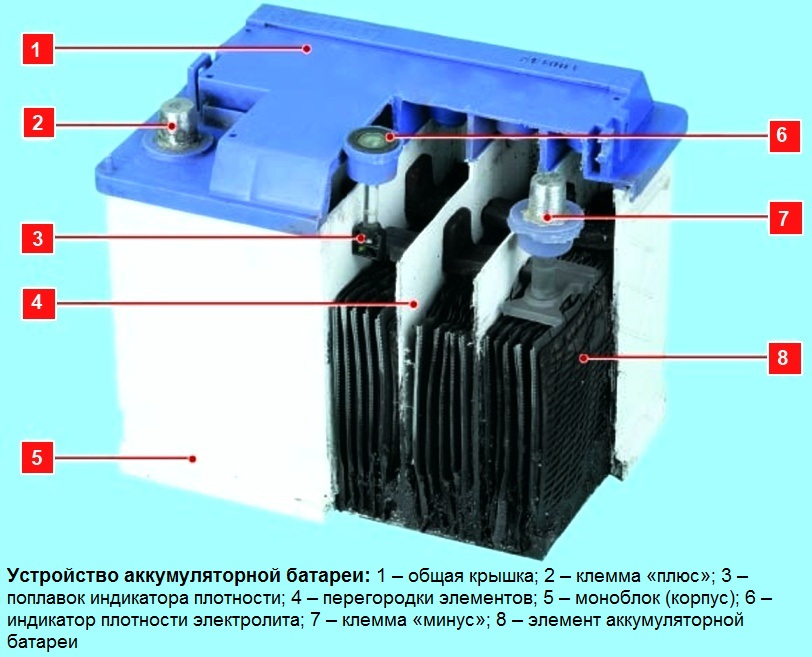 The battery elements are located in a polypropylene monoblock and are closed by a common cover, inseparably connected to the monoblock.

There are no plugs in the battery cover, since topping up with distilled water is not required.

Two vent holes allow a small amount of gas generated in the battery to escape to the outside.

A modern car is saturated with various consumers of electricity, electronic devices, from the audio system to the blocks of electronic engine control systems, gearboxes, anti-lock brakes, airbags, etc.

As practice shows, if there are problems with starting the engine in the cold season and to solve them, you constantly have to recharge the battery, provided that the generator is in good condition and the tension of the auxiliary drive belt is normal, and the battery life exceeds 3 years, it is quite reasonable to get up question about buying a new battery.

– maintenance-free during the entire service life;

- low-maintenance, requiring topping up with distilled water once or twice a year.

It is advisable to choose for your car, taking into account the recommendations of the manufacturer, a maintenance-free battery from a wide range of car batteries from various manufacturers on the automotive aftermarket.

It must be remembered that at low temperatures, due to an increase in the viscosity of engine oil and a deterioration in the ignition conditions of the fuel, the power consumed by the starter when starting the engine increases by two to three times.

The starting time of a cold engine in comparison with a warm one in some cases increases by 10–20 times.

Thus, in winter, at low air temperatures, increased requirements are placed on the starter characteristics of the battery, i.e. to its ability for a short time (10 s according to GOST) to deliver the required current necessary for the operation of the starter with the nominal speed of its armature in the cold season (-18 ° С according to GOST).

The manufacturer installs a lead-acid battery with a nominal voltage of 12 V and a capacity of 60 Ah on the car.

The principle of operation of lead-acid batteries is based on the electrochemical reactions of lead and lead dioxide in a sulfuric acid environment.

During the discharge, lead dioxide is reduced at the cathode and lead is oxidized at the anode. When charging, reverse reactions occur, to which, at the end of the charge, the water electrolysis reaction is added, accompanied by the release of oxygen at the positive electrode and hydrogen at the negative.

A lead-acid battery cell consists of positive and negative electrodes, separators (separating grids) and an electrolyte.

The positive electrodes are a lead grid in which the active substance is lead peroxide (PbO2).

The negative electrodes are also a lead grid with spongy lead as the active substance.

In practice, 1–2% antimony is added to lead gratings to increase mechanical strength.

Currently, calcium salts are used as an alloying component in both plates or only in positive ones (hybrid technology).

The electrodes are immersed in an electrolyte consisting of an aqueous solution of sulfuric acid (H2SO4).

In practice, in regions with a cold climate, higher concentrations of sulfuric acid are also used - up to 1.29–1.31 g/cm3.

This is done because when a lead-acid battery is discharged, the density of the electrolyte drops and its freezing point becomes higher, a discharged battery may not withstand the cold.

In new battery designs, lead plates (grids) are replaced with foamed carbon covered with a thin lead film, and the liquid electrolyte is gelled with silica gel to a pasty state.

Using less lead and distributing it over a large area, the battery is made not only more compact and lighter, but also much more efficient: in addition to greater efficiency, it charges much faster than previous generation batteries.

The battery cells are located in a polypropylene monoblock (case) and are closed by a common cover, inseparably connected to the monoblock.

The two vents on the sides of the battery at the top allow the small amount of gas generated in the battery to escape.

An electrolyte density indicator 6 can be mounted in the battery cover, the readings of which take into account the temperature of the battery. There are three options for the indicator readings:

Instead of a regular maintenance-free battery, you can install any battery of other manufacturers that is similar in capacity and mounting dimensions.

In this case, use and maintain the battery in accordance with the instructions supplied with it.

Removing and installing the battery 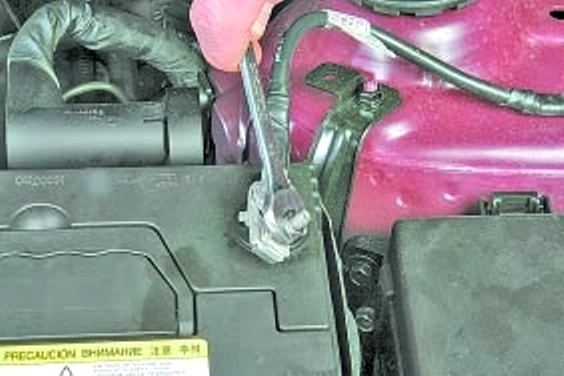 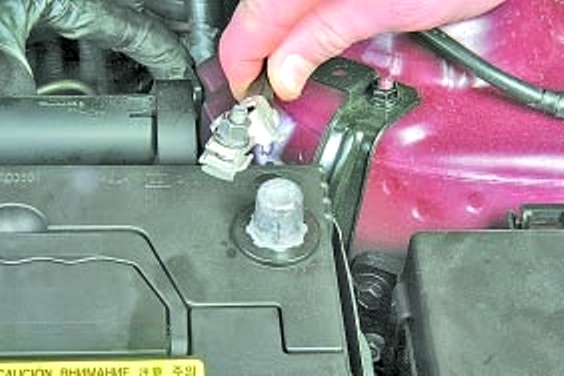 Weaken the nut of the coupling bolt of the handpiece

Disconnect the wire from the negative terminal of the battery 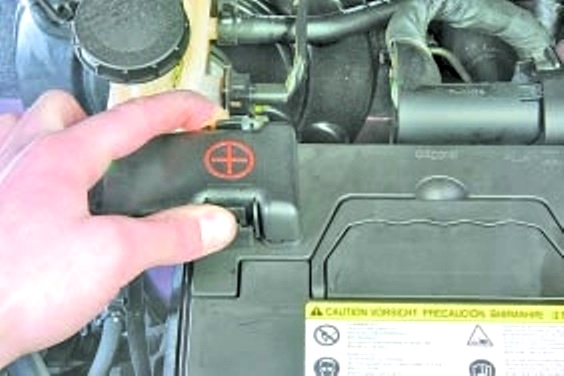 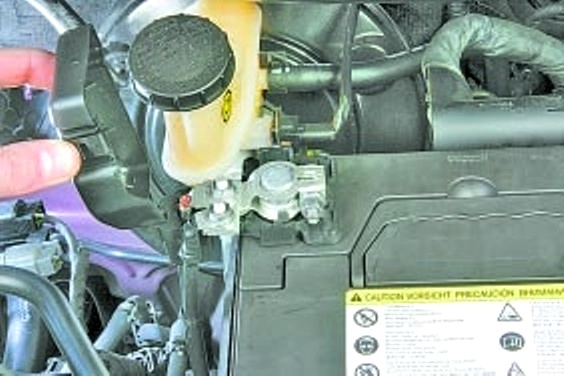 We squeeze the latches of the protective cover 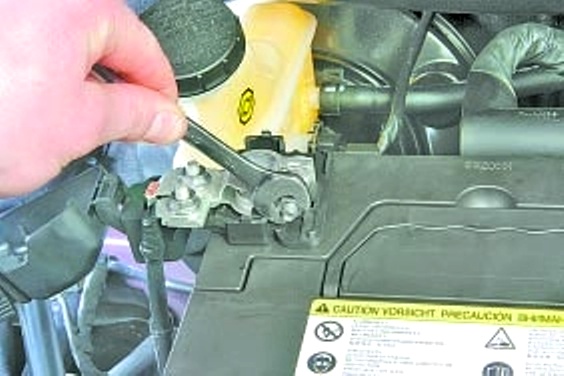 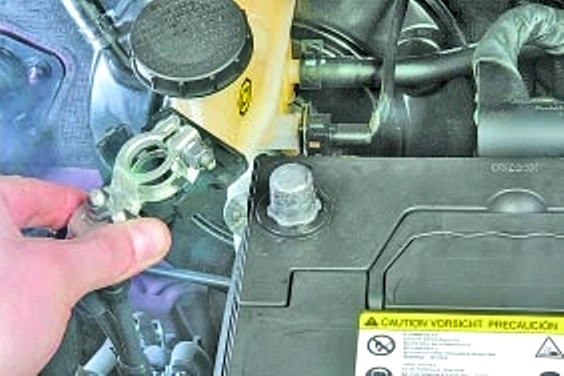 Weaken the nut of the coupling bolt of the handpiece

And disconnect the wire from the positive terminal of the battery 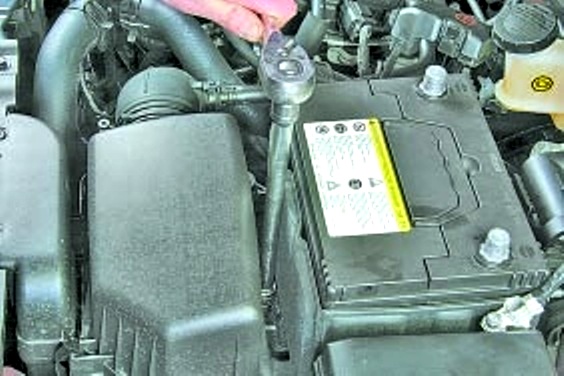 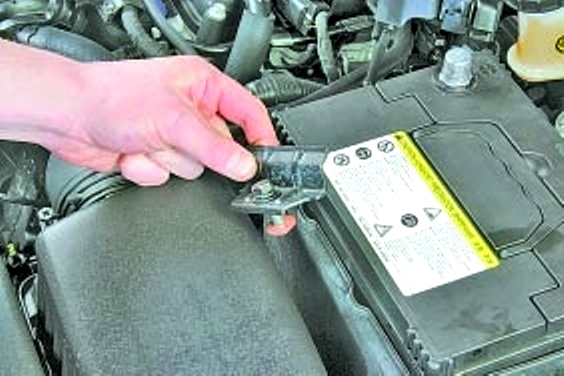 We unscrew the bolt securing the clamping bar

We remove the bar 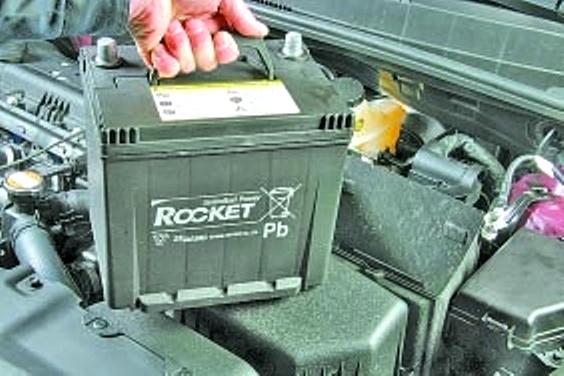 Removing the battery from the engine compartment

After connecting the wires to the terminals, apply a thin layer of copper-containing conductive grease to the wire lugs and exposed terminal surfaces.

How to store the battery

Lead-acid batteries should only be stored in a charged state.

Battery storage above 30°C is not recommended.

A layer of dirt and scale on the surface of the battery becomes a conductor for current from one contact to another and leads to self-discharge of the battery, after which premature sulfation of the plates begins.

This is why the surface of the battery cover must be kept clean (wash before storage).

Storing lead-acid batteries in a discharged state results in a rapid loss of performance.

With long-term storage of the battery and its discharge with high currents (in the starter mode) or with a decrease in capacity, it is necessary to carry out control-training (“treatment”) cycles, that is, discharge-charge with currents of a nominal value.

If during operation there are difficulties with starting the engine, check the degree of charge of the battery by the density of the electrolyte or the voltage at its terminals in an unloaded state.

The voltage at the battery terminals can be measured with any DC voltmeter with a measurement limit of 20 V (such a voltmeter is included in all commercially available autotesters).

If the battery state of charge is 75% or lower, the battery must be removed from the vehicle and charged using a charger.

Carefully clean the battery removed from the car, especially its upper part, check the electrolyte level and bring it to normal (if a serviceable battery is installed on the car).

If the battery is discharged in a short period of time (for example, due to the headlights left on or the interior lights of a car that has not been used for some time), it is necessary to slowly charge the battery (low current) for 10 hours.

If the battery is gradually discharged due to high electrical load while using the vehicle, recharge it with 20-30A current for two hours.

The serviced battery is charged with a current equal to 10% of the nominal value of the battery capacity, with the plugs turned out.

Charging is carried out until the onset of abundant gas evolution and the achievement of a constant voltage and electrolyte density for 3 hours.

The density of the electrolyte of a charged battery at 25 ° C must correspond to the data in the table for each climatic region.

When charging the battery, periodically check the temperature of the electrolyte and do not allow it to rise above +40 °C.

When the temperature reaches +40°C, reduce the charging current by half or interrupt charging and cool the battery down to +27°C.

Charging is stopped when abundant gas evolution begins in all battery cells, and the voltage and electrolyte density during the last three measurements (carried out 1 hour after the battery is turned off) will remain constant.

If at the end of charging the electrolyte density (determined with a temperature correction) differs from the value indicated in the table, correct it.

Then disconnect the battery and after 30 minutes measure the electrolyte level in all cells.

If the electrolyte level is below normal, add electrolyte, the density of which corresponds to the given climatic region.