The engine cooling system is liquid, closed type, with forced circulation of liquid.

The circulation of the liquid in the system is created by a water pump. From the pump, the liquid is supplied to the engine cooling jacket, washes the cylinders, combustion chambers, throttle assembly, heater radiator (at low temperatures) and then flows to the thermostat.

Depending on the position of the thermostat valve, liquid enters the cooling jacket (at low temperature) or the radiator (at high temperature).

Radiator with horizontal fluid flow, with tubular-strip aluminum core and plastic tanks. There is a drain cock at the bottom of the left radiator tank. 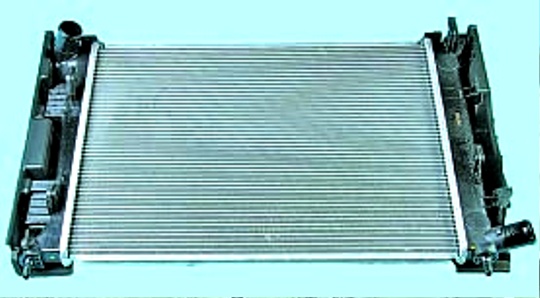 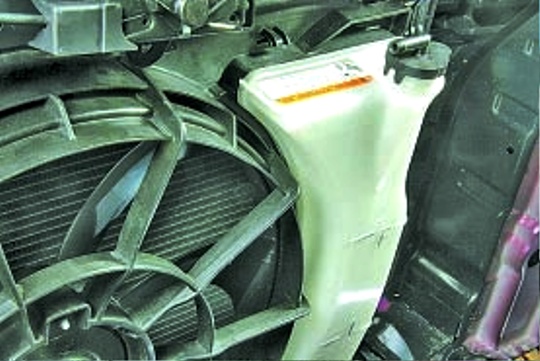 In the tanks are made inlet and outlet branch pipes of the hoses to the water jacket of the engine and the filler neck.

The expansion tank serves to compensate for the changing volume of the coolant depending on its temperature.

It is made of translucent plastic. The reservoir body is marked "F" (full) and "L" (low) to check the coolant level.

The reservoir is connected with a hose to the radiator filler neck.

A centrifugal water pump provides forced circulation of fluid in the cooling system, is installed on the front surface of the cylinder block and is driven by a poly V-belt from the crankshaft pulley. 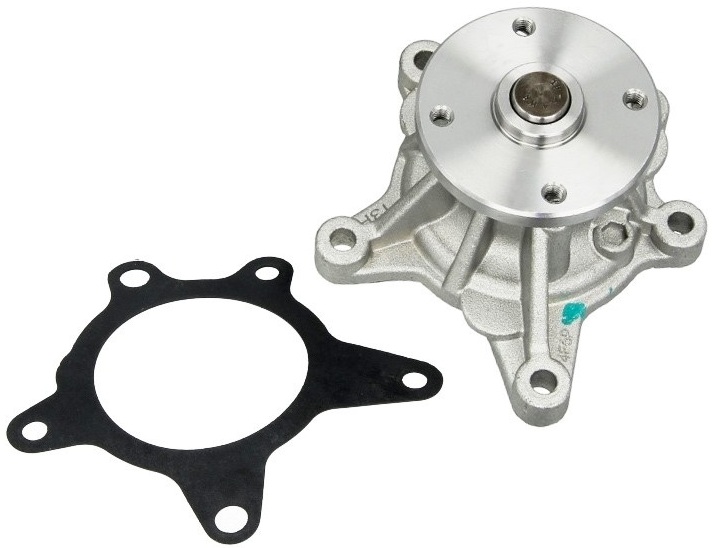 The pump has sealed bearings that do not require relubrication.

The pump cannot be repaired, therefore, in case of failure (fluid leakage or damage to bearings), it is replaced as an assembly.

A thermostat with a solid heat-sensitive filler maintains a normal operating temperature of the coolant and shortens the engine warm-up time.

The thermostat is installed in a housing fixed to the cylinder head. 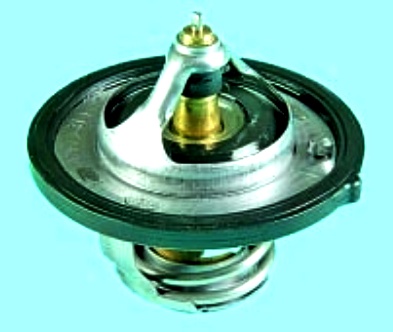 At a coolant temperature of up to (82 ± 1.5) ° C, the thermostat is completely closed and the liquid circulates in a small circuit, bypassing the radiator, which speeds up the engine warm-up.

At a temperature of (82 ± 1.5) ° С, the thermostat begins to open, and at 95 ° С it opens completely, providing circulation of liquid through the radiator.

Usually the thermostat is replaced when the valves are stuck, either in open position or in closed position.

In the closed position, if the valve gets stuck, the engine overheats, the coolant flows in a small circle, bypassing the engine cooling radiator

If the thermostat is stuck open, the engine does not warm up enough or takes a long time to warm up.

The electric fan of the cooling system (with a plastic impeller) serves for additional airflow to the radiator; it is switched on and off by a signal from the electronic engine control unit.

Moreover, depending on the intensity of the thermal regime and the operation algorithm of the air conditioner, the electric fan can rotate at low and high speeds.

Changing the fan speed is provided by the engine control unit by connecting an additional resistance. 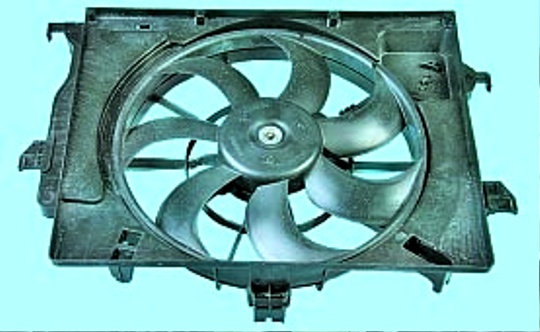 The electric fan assembly with a casing is fixed to the radiator of the cooling system.

The system is filled with a liquid (antifreeze) that does not freeze at ambient temperatures down to –40 ° C.

Possible malfunctions of the cooling system and methods of elimination

The engine gets very hot

Water pump defective - Check the pump and replace if defective

Damage to the valve in the radiator filler cap (the valve is constantly open, causing the system to be under atmospheric pressure) - Replace the filler cap

Constant decrease in coolant level in the expansion tank

Replace the damaged gasket, restore the tightness of the plugs

The engine overheats, cold air comes from the heater

Excessive coolant level drop due to leakage or damage to the cylinder head gasket causing vapor lock in the engine water jacket - Repair the coolant leak.

Before changing the coolant, you must wait until the engine has cooled down so as not to burn yourself with vapors or the liquid itself 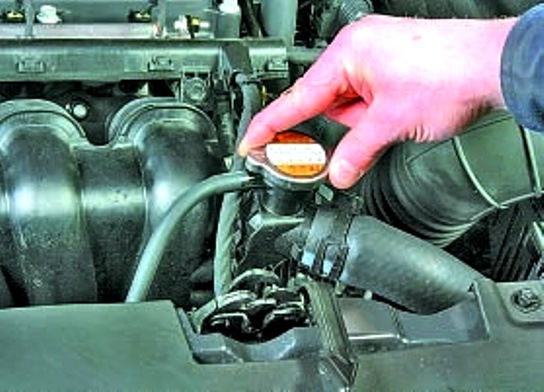 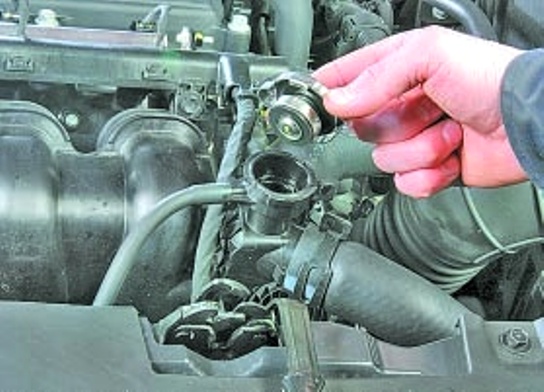 And remove the plug 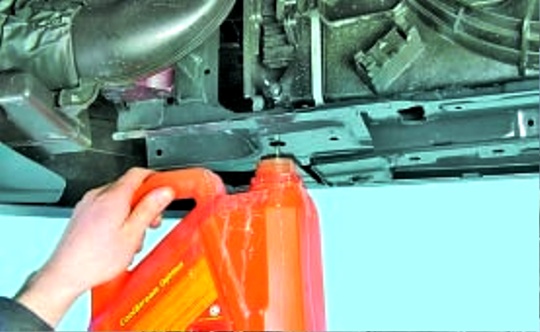 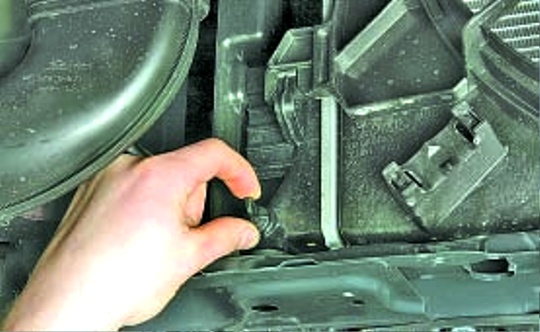 We substitute the container for draining the liquid under the radiator valve of the cooling system, which is located in the lower left part of the radiator 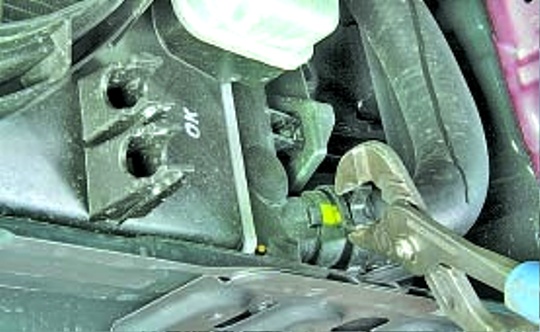 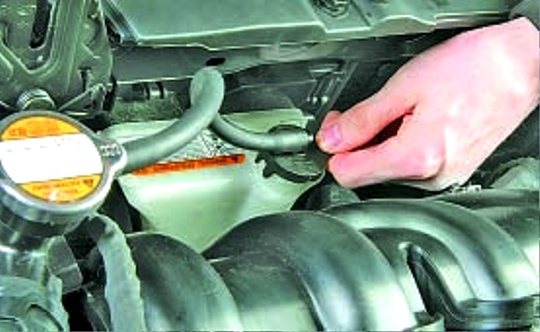 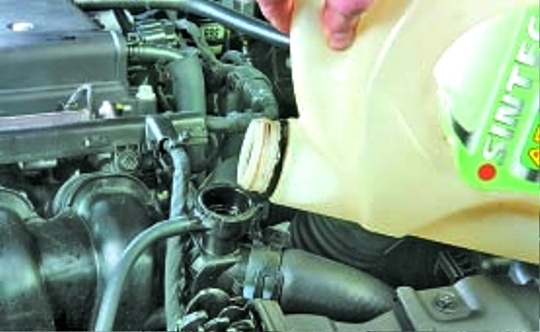 We open the cap of the expansion tank and remove the remaining coolant from the tank using a rubber bulb or a technical syringe.

We fill the engine cooling system by pouring coolant into the filler neck of the radiator until it begins to overflow from the neck into the hose to the expansion tank. 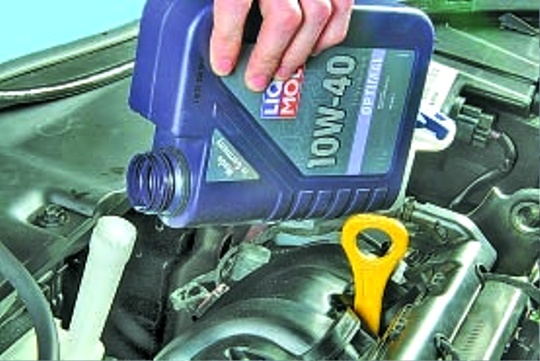 Then we stop the engine and, if necessary, add liquid to the expansion tank to the mark "F"

When the engine is running, observe the coolant temperature on the gauge.

If the pointer reaches the red zone, and the radiator fan does not turn on, turn on the heater and check what air passes through it.

If the heater supplies heated air, most likely the fan is faulty, and if it supplies cold air, then an air lock has formed in the engine cooling system. 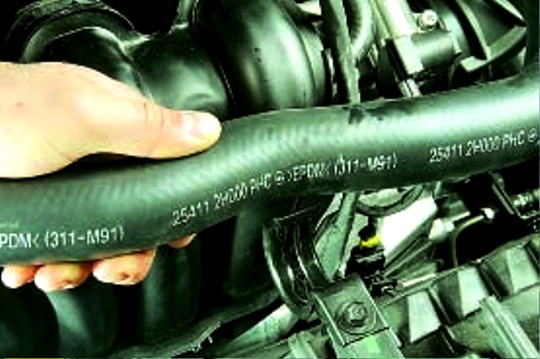 To better fill the system without air pockets, periodically squeeze the radiator hoses with your hand.

After a few days of car operation after changing the coolant, check its level. Refill the level if necessary.

If, after a very short time, the color of the fresh liquid turns brown, it means that you have poured a fake into which the manufacturer “forgot” to add corrosion inhibitors.

In addition, one of the signs of a fake is a sharp complete discoloration of the liquid. Good quality coolant dye is highly durable and will only darken over time.

Liquid tinted with linen blue becomes discolored. This "antifreeze" must be replaced as soon as possible.