The air supply system for engines with a selective catalytic converter system consists of the following components:

- heater of the intake system. 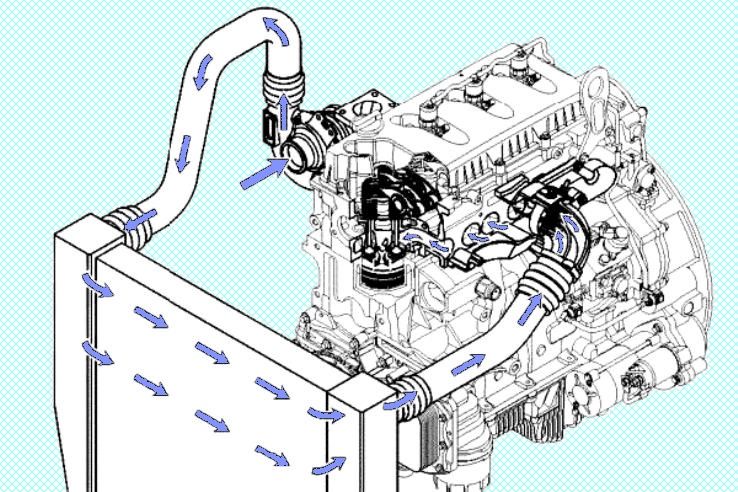 Install a vacuum or water pressure gauge in the intake air duct.

The pressure gauge adapter must be installed perpendicular to the air flow in the straight section of the duct, at a distance of one duct diameter from the turbocharger.

Note: On many automotive engines, intake resistance can be measured by removing the mechanical clogging indicator and replacing it with a vacuum or water gauge. 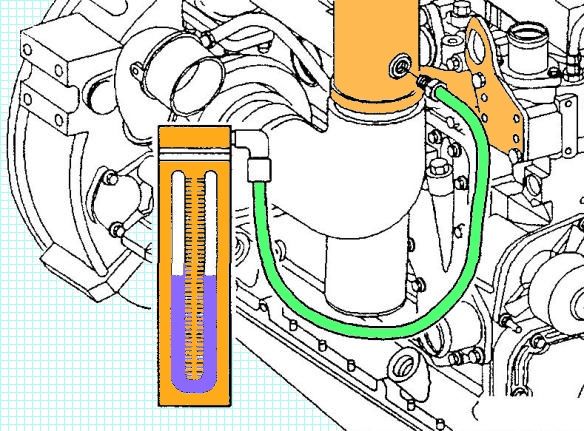 Take the reading on the pressure gauge. 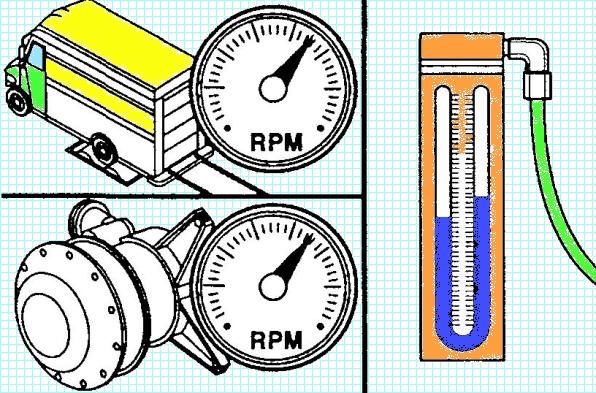 If the resistance is higher than normal:

- Replace or clean the air filter.

Check the pipe connecting the compressor and the charge air aftercooler for breaks.

Note: when using low-quality pipes, they may rupture when the maximum boost pressure is reached (for example, when driving on a highway at a speed close to maximum, when driving uphill or when overtaking).

Drivers of GAZ "Valdai" cars of early years of production especially suffer from this malfunction.

In addition, the branch pipe of these cars has a complex shape and it is not always possible to find it on sale.

As a compromise, dealers suggest lowering boost pressure, but at the same time losing power.

Some owners solved the problem drastically by installing a homemade metal adapter on the pipe, which reduced its diameter, which made it possible to install a more durable hose that has the same dimensions at both ends. 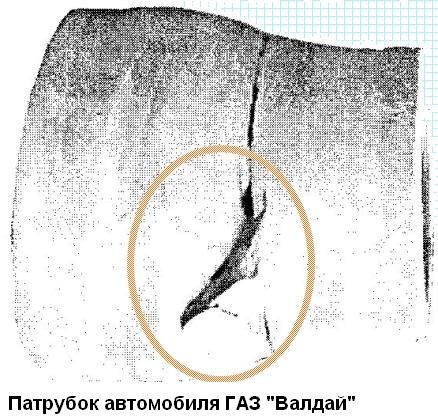 Attention: movement with a torn branch pipe causes dirty air to suck in, which will lead to a quick failure of the turbine and the cylinder-piston group.

Remove the air intake duct and air intake manifold from the turbocharger. 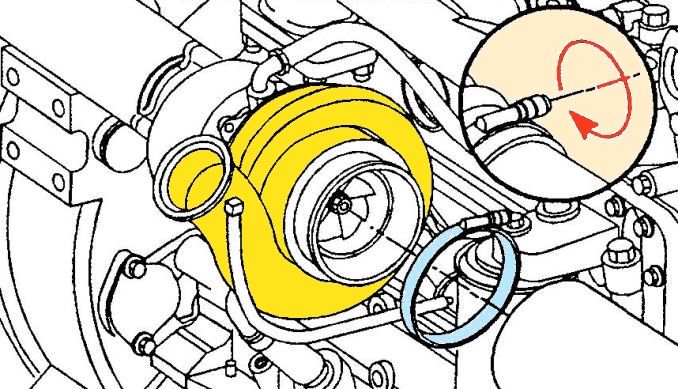 Replace the turbocharger if damaged.

If the compressor impeller is damaged, check the air intake duct and filter element for damage. 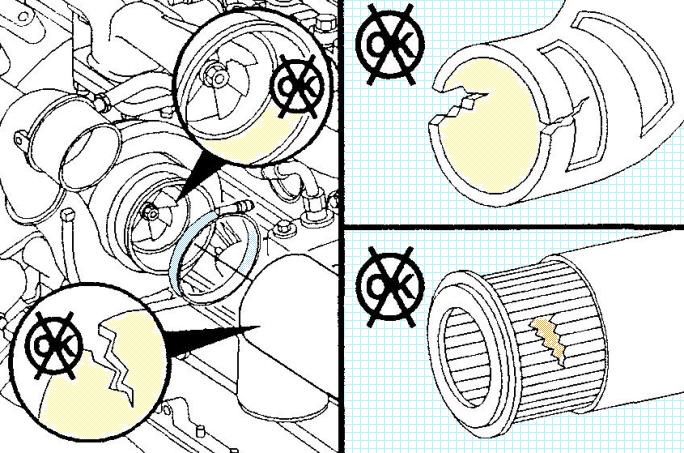 Repair all damage before starting the engine.

Remove the outlet from the turbocharger outlet.

Check the turbine wheel for damage. 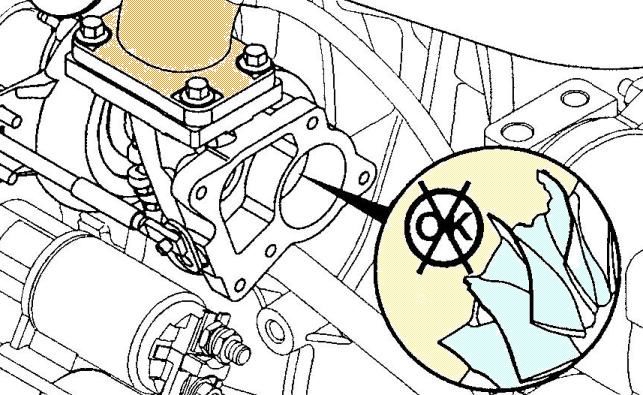 Replace the turbocharger if the lever pin is worn beyond the limit. 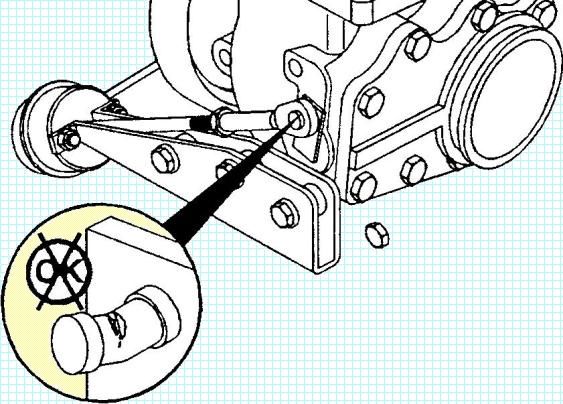 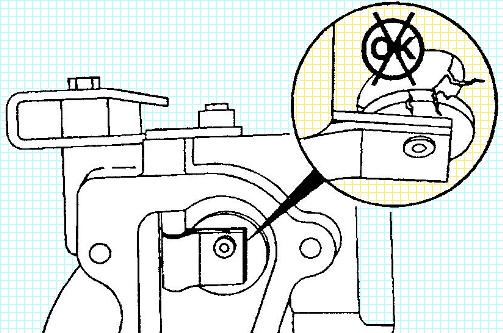 Check the valve and valve seat for cracks or erosion.

Replace the turbocharger if necessary.

Move the lever by hand to check the freedom of rotation of its axis.

Check for excessive play between axle and bushing.

Replace the turbocharger if axle and bushing are damaged or jammed. 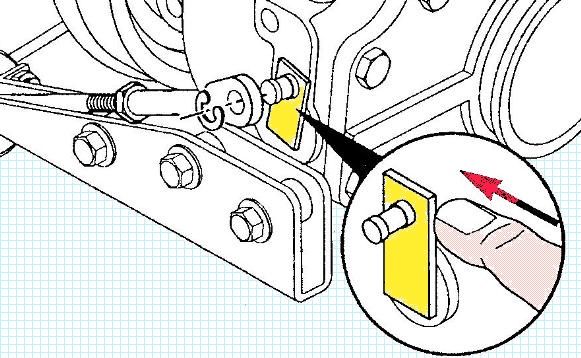 Check the axial clearance of the turbocharger axle.

Install the dial gauge on the turbocharger axle.

Set the indicator to zero. 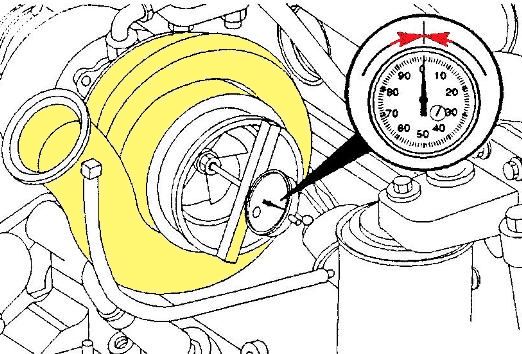 Move the axle to the indicator tab and determine the axial clearance. 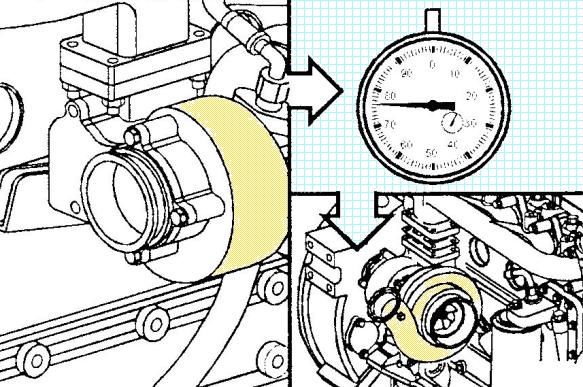 Check the radial clearance of the turbocharger axle bearing.

Gently press the compressor wheel against the housing and dipstick. 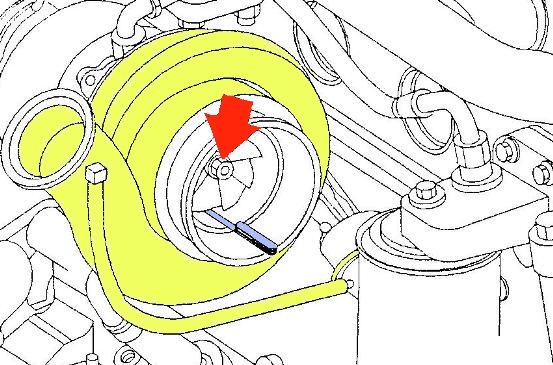 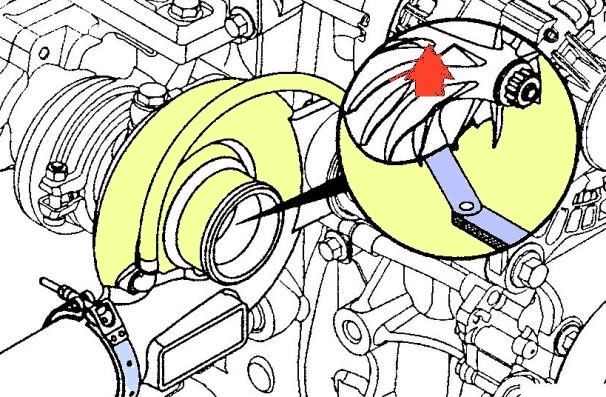 Record the amount of clearance.

While holding the dipstick in the same position, move the compressor wheel away from the housing and re-measure the gap between them.

Subtract the smaller amount of the gap from the larger one. The result obtained is the radial clearance of the bearing.

Repeat these steps for the turbine impeller.

Replace the turbocharger if the bearing radial clearance is not correct.

Check the turbocharger compressor inlet and outlet for oil.

If oil is found in both passages, check for an oil source upstream of the turbocharger.

- The presence of traces of oil at the compressor inlet is allowed for engines with a closed crankcase ventilation system, in which the crankcase cavity communicates with the intake air duct.

- After a turbocharger failure or in other cases when oil or foreign particles enter the charge air system, it must be checked and cleaned.

If deposits and / or oil drips are found only in the outlet, install the air inlet and charge air cooler lines to check the resistance of the intake system.

Check the resistance of the intake system.

If there is no resistance in the inlet, replace the turbocharger. 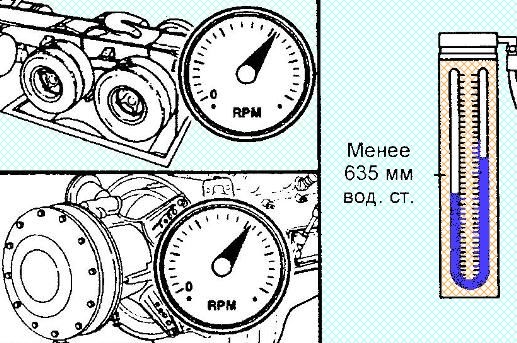 Note: The fluorescent dye is supplied in 118 ml plastic bottles.

Let the engine run at low idle speed for 10 minutes. 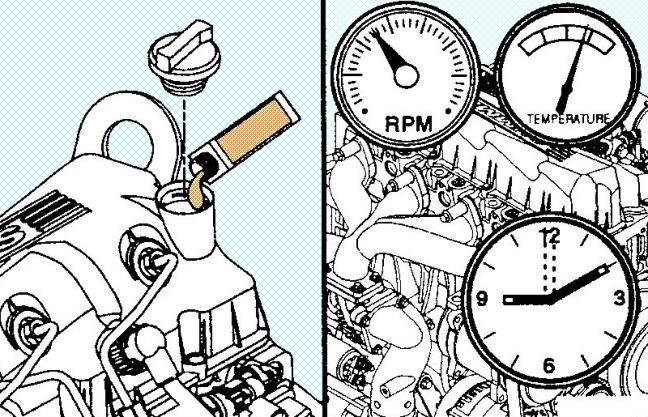 Turn off the engine.

Let the turbocharger cool down.

Remove the outlet pipe from the turbocharger outlet fitting.

Remove the outlet of the exhaust system. 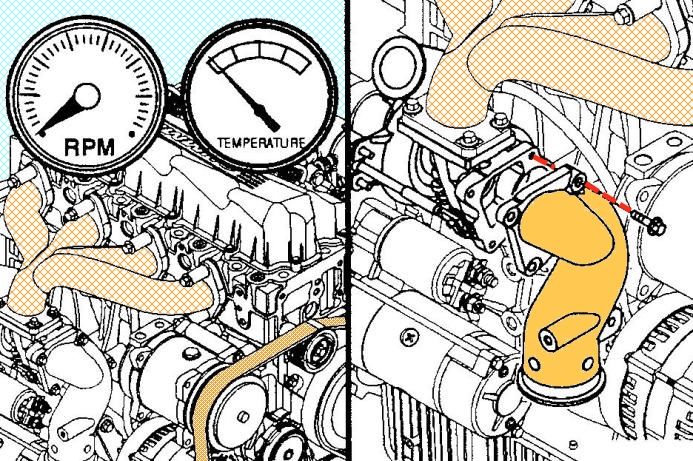 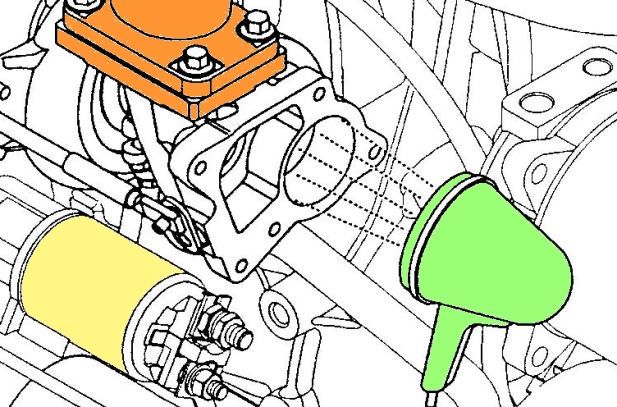 If oil is found in the turbine housing, remove the oil drain line and check if it is clogged.

If you find a blockage, remove it.

Install the return line with new O-rings to the cylinder block. 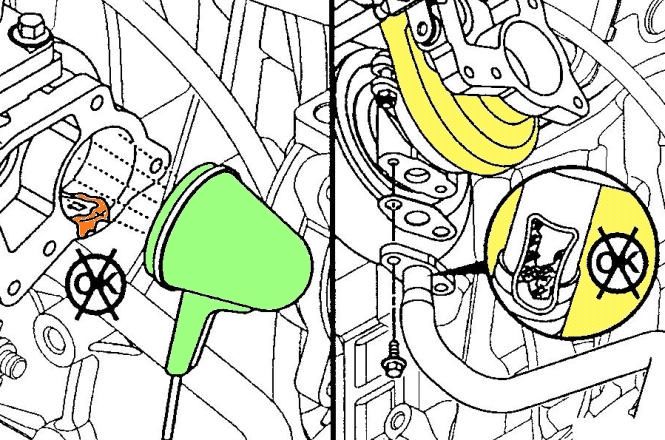 If there is no blockage in the drain line, remove the turbocharger.

A yellow glow indicates an oil leak from the engine.

In the case of a yellow light, the turbocharger can be reinstalled and continued to operate.

A thin layer of oil on the housing and the turbine impeller need not be removed, as it will burn itself out during engine operation.

All oily deposits in the turbine housing must be removed before installation with a clean cloth.

If no yellow glow is found at the turbine inlet, replace the turbocharger. 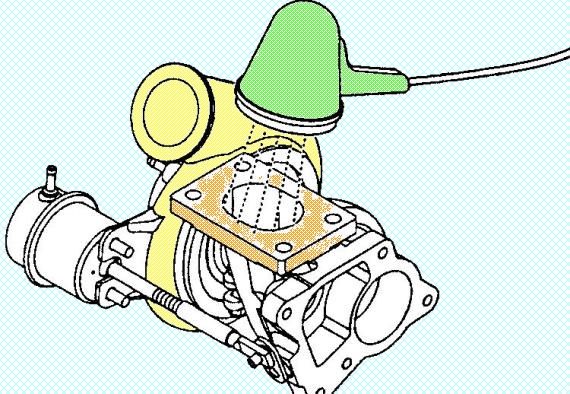 Install the inlet pipe to the turbocharger compressor inlet.