Usually, we begin to check and replace the hydraulic pushers when there is an increased noise from the engine.

This is usually a ringing sound at the top of the engine.

Malfunctions of hydraulic pushers and methods of their correction are in the table at the end of the article.

The hydraulic pushers of the VAZ-2112 engine, made in the form of cylindrical pushers located between the camshaft and the valves, combine two functions: transferring force from the camshaft to the valves and eliminating gaps in their drive.

This ensures that the tappet is in constant contact with the camshaft cam without play.

This eliminates the need for valve adjustments during maintenance. 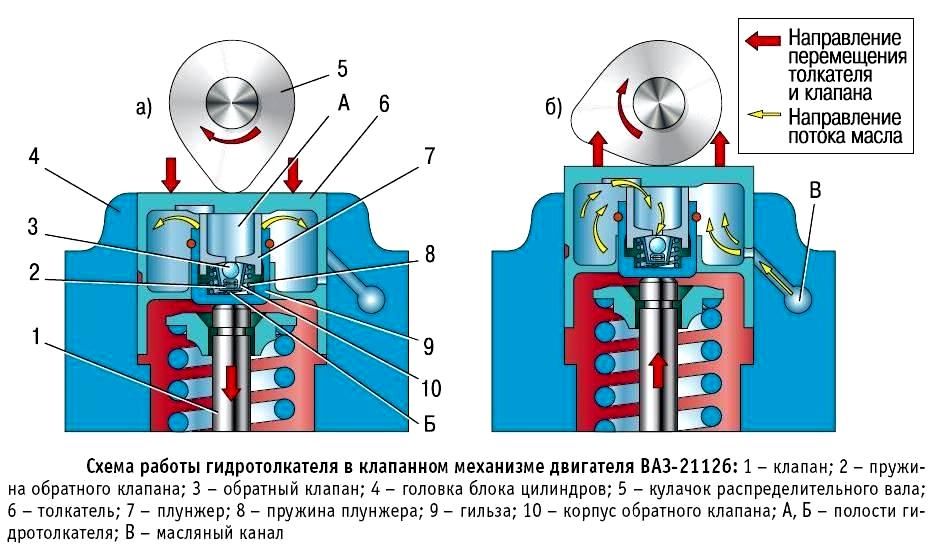 Into the engine lubrication system through the side hole in the pusher 6, made in the annular groove of its cylindrical surface.

When the valve 1 is closed, the pusher 6 (through the plunger 7) and the sleeve 9 are pressed against the cam 5 of the camshaft and the end of the valve stem by the expanding force of the springs 8, respectively.

The pressure in cavities A and B is the same, the check valve 3 of the hydraulic pusher is pressed against the seat in the plunger 7 by the spring 2 - there are no gaps in the valve mechanism.

When the camshaft rotates, the cam 5 runs onto the pusher 6, moving it and the plunger 7 associated with it.

The movement of the plunger 7 in the sleeve 9 leads to a sharp increase in pressure in the cavity B.

Despite small oil leaks through the gap between the plunger and the sleeve, pusher 6 and sleeve 9 move in one piece and open valve 1.

With further rotation of the camshaft, cam 5 reduces the pressure on the pusher 6 and the oil pressure in cavity B becomes lower than in cavity A.

The check valve 3 opens and passes oil from cavity A, connected to the engine oil line, into cavity B.

The pressure in the cavity B increases, the sleeve 9 and the plunger 7, moving relative to each other, choose a clearance in the valve mechanism.

The pressure of the oil supplied to the hydraulic pushers is controlled by a valve installed in the cylinder head.

Since after stopping the engine from the channels coming from the oil pump, oil flows into the oil sump, and the channels for supplying oil to the hydraulic pushers remain filled, after starting the engine, air locks may form in the cavities of the latter.

To eliminate them, calibration compensation holes are provided in the engine oil supply channels, which provide automatic purging of the hydraulic pusher cavities.

In addition, the compensation holes make it possible to somewhat reduce the pressure of the oil entering the hydraulic pushers at a high speed of rotation of the engine crankshaft, when the pressure in the cavity of the hydraulic pusher can become so great that its pusher, leaning on the back of the camshaft cam, will slightly open the valve at a moment that does not correspond valve timing.

Almost all hydraulic pusher malfunctions are diagnosed by the characteristic noise emitted by the gas distribution mechanism in various engine operating modes.

Valve noise can sometimes be eliminated by slightly turning the spring or valve around the longitudinal axis.

To do this, do the following.

1. Turn the crankshaft to a position where the noisy valve starts to open slightly.

2. Turn the spring a little - the valve turns at the same time.

If the valve and the spring are in good order, and the knock of the valves is still heard when the engine is running, the hydraulic pusher is faulty. Replace it as follows.

We remove the receiver.

Cover the openings of the intake manifold with covers to prevent foreign objects from getting into it. 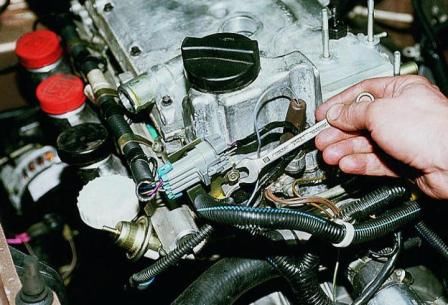 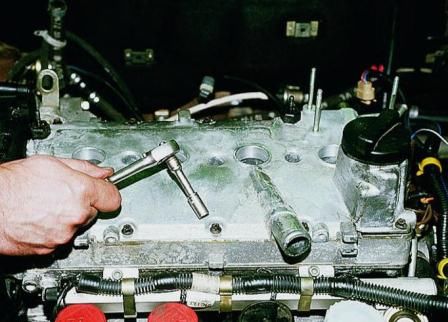 Using a 10 key, unscrew the bolt securing the bracket for the injector wiring harness connector.

With a head of 8, unscrew the 15 bolts securing the cylinder head cover (valve cover). 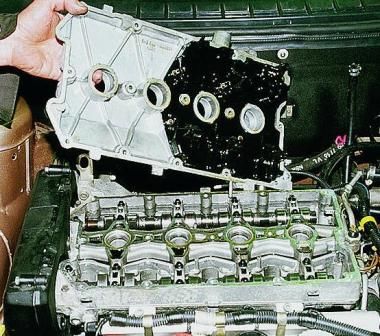 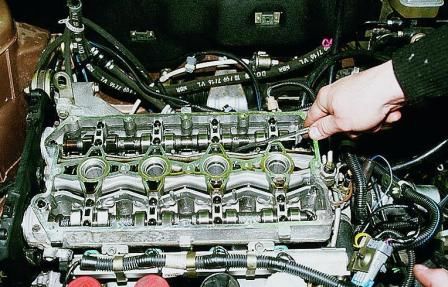 We check the hydraulic pusher by pressing on it with a soft metal drift or a screwdriver (while the camshaft cam should be facing the pusher with its "back of the head").

To do this, remove the toothed camshaft pulleys, (see information on removing the pulleys Removal and installation of the cylinder head of the VAZ-2112 engine).

Remove the wire from the oil pressure warning lamp sensor. 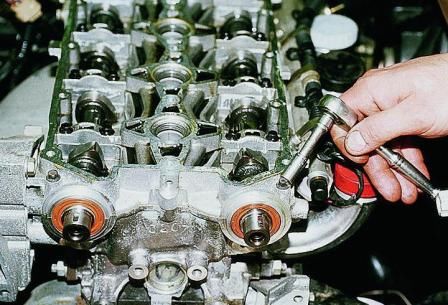 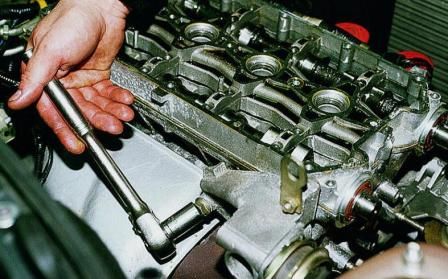 With a head of 8, we unscrew the 20 bolts securing the camshaft bearing housing

With a 15-inch head, unscrew the three nuts securing the rear support bracket. 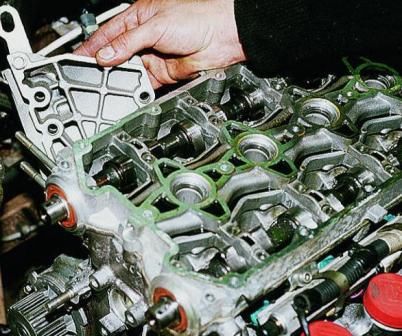 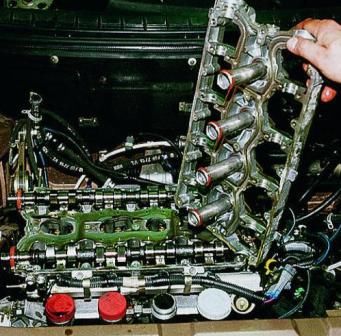 We take out the guide pipes of the spark plugs from the body. 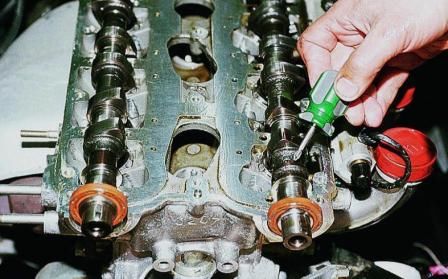 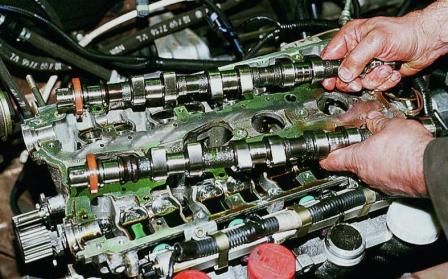 To distinguish the intake camshaft from the exhaust camshaft, a belt is made on the intake shaft near the first journal.

We take out the camshafts with oil seals. 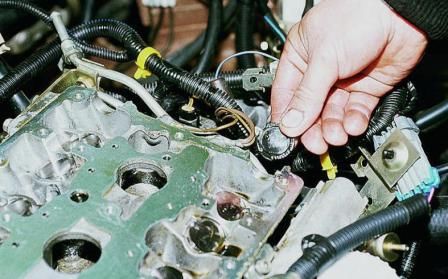 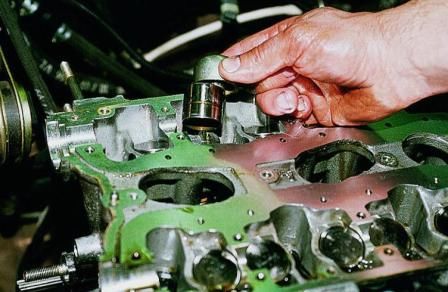 Attaching the magnet to the end of the hydraulic pusher, remove it from the cylinder head socket

If necessary, replace the hydraulic pusher with a new one and install it in the socket.

Before assembly, we clean the cylinder head and the camshaft bearing housing from the remnants of old sealant and oil.

Lubricate the bearing journals and camshaft cams with engine oil and place the shafts in the cylinder head supports.

On the surface of the shaft bearing housing, mating with the cylinder head, we apply Loctite sealant No. 574 with a flagellum about 2 mm thick.

Places of applying sealant to the bearing housing

Install the bearing housing and tighten the mounting bolts evenly. 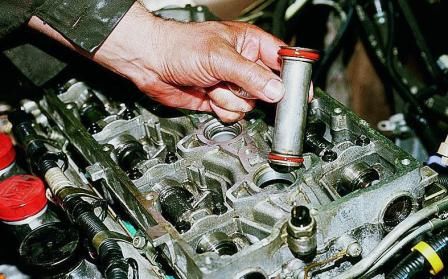 After lubricating the O-rings of the guide pipes with engine oil, we install the pipes in the holes of the cylinder head and bearing housing.

On the other side of the cylinder head, press in the plugs.

We carry out further assembly in the reverse order of disassembly.

Before installing the cylinder head cover, apply Loctite No. 574 sealant to its surface, which is mated with the bearing housing. 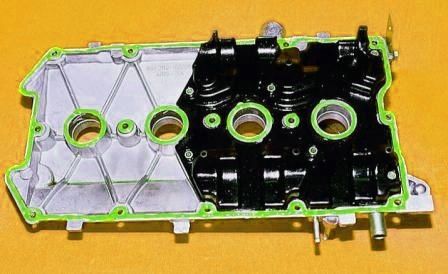 Places of applying sealant to the cylinder head cover

After replacing the hydraulic pushers, the engine may operate with increased noise for a short time.

Possible malfunctions of hydraulic pushers, their causes and remedies

Leakage of oil from a part of hydraulic pushers during long-term parking.

Noise that disappears a few seconds after starting the engine is not a sign of a malfunction, since some of the hydraulic pushers, which were under the load of the valve springs of the open valves (the oil supply channels remained open), leaked oil, the lack of which is replenished at the start of the engine operation

- Damage or wear of the ball of the non-return valve

Clean the parts of the mechanism from dirt. Use the oil recommended in the instruction manual

Increased noise in the idling mode of a warm engine, which disappears at an increased crankshaft speed and is completely absent on a cold engine:

Increased noise that occurs at a high crankshaft speed and disappears at a low frequency:

- Foaming with an excess of oil (above the upper mark on the dipstick) in the oil sump due to agitation by the crankshaft. The ingress of an air-foam oil mixture into the hydraulic pushers disrupts their operation

Bring up the oil level in the oil sump to normal

Bring up the oil level in the oil sump to normal

Continuous noise from one or more valves, independent of the crankshaft speed:

Remove the cylinder head cover, alternately install the camshaft cams with the protrusions up and check for a gap between the tappets and the cams.

* The following reasons for the increased noise in idle mode are possible, which increases with an increase in the crankshaft rotation speed up to 1500 rpm and is not associated with the operation of hydraulic pushers:

- increased to a value exceeding the permissible value, misalignment of the valve and seat;

- non-parallelism of the ends of the valve springs;

- greater than permissible runout of the valve head chamfer.