How to remove and repair the fuel pump ZMZ-402

The fuel from the tank goes through the fuel line to the diaphragm pump.

It is driven by the camshaft eccentric, which acts on the pump drive lever. A fine brass mesh filter is installed on the pump inlet fitting.

When the engine is not running, fuel is pumped into the carburetor by the lever of the manual pump drive.

There is a hole in the lower part of the pump housing to monitor the integrity of the fuel pump membrane.

Removal and disassembly of the fuel pump

Conditionally, we remove the pump from the engine removed from the car. 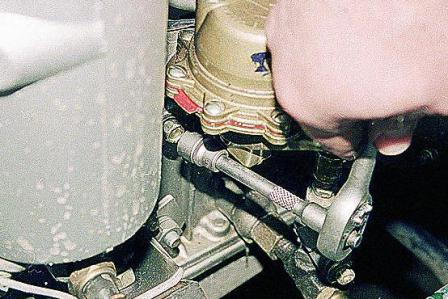 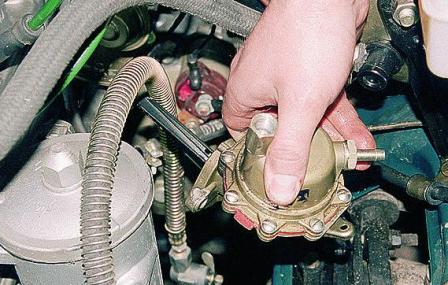 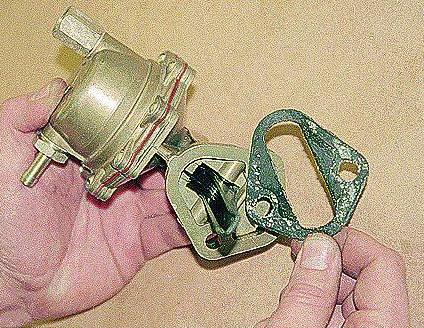 With the head on 12, we turn off the two bolts of the fuel pump attachment 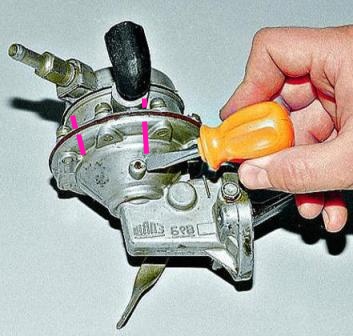 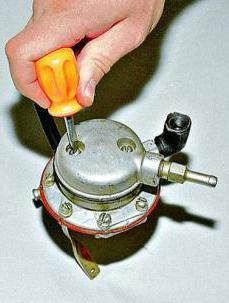 Use a flat screwdriver to unscrew two screws 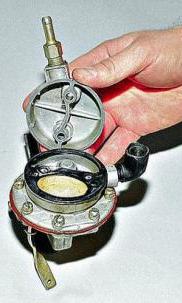 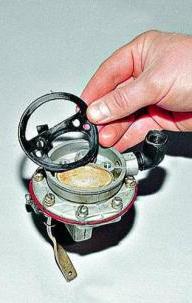 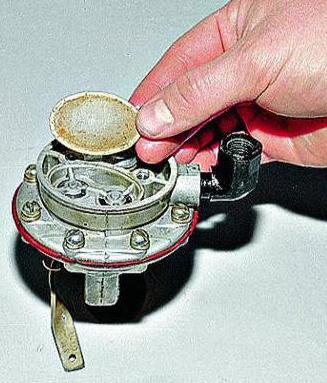 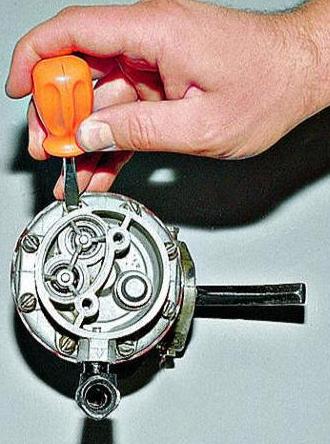 With a screwdriver, we unscrew the eight screws that tighten the halves of the case. 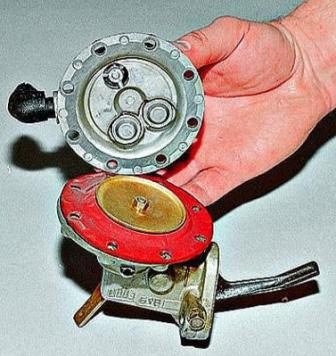 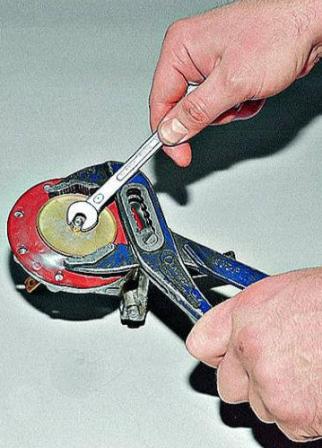 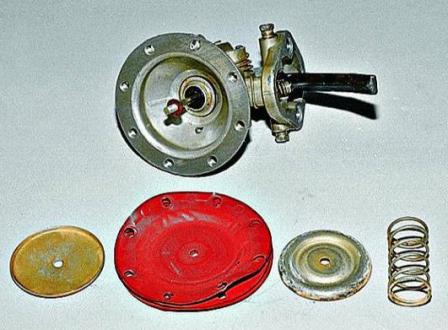 With the key "on 8" we turn off the nut of the stem, holding the upper washer of the membrane with sliding pliers

We remove the upper washer, three membranes, the lower washer and the spring.

If only the membranes are damaged, replace them and assemble the pump in reverse order 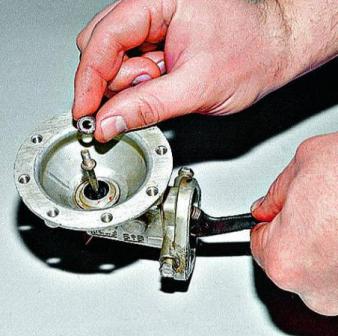 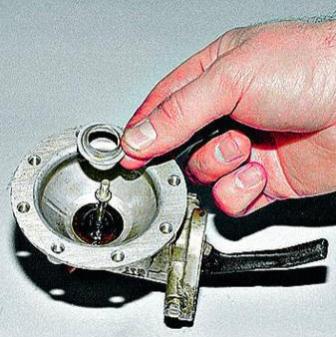 For complete disassembly of the pump, we remove the thrust washer of the membrane from the stem

We remove the thrust washer of the spring. 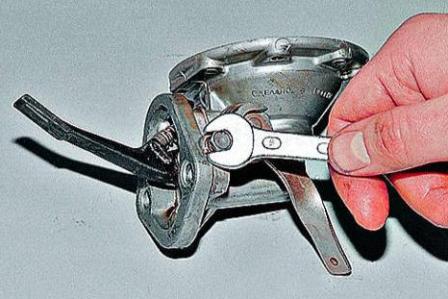 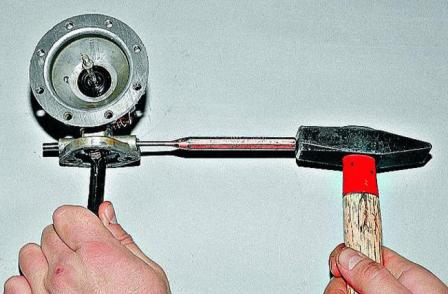 With the key "on 9" we turn off two screw plugs.

With a thin beard, we knock out the axis of the pump drive lever 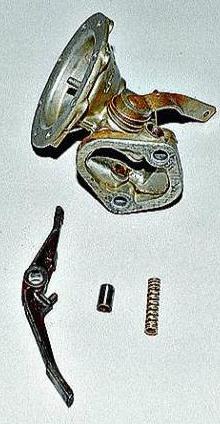 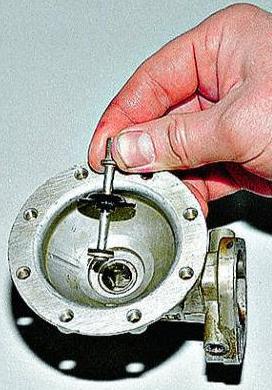 We take out the drive lever, the lever sleeve and the spring

We take out the stem with a seal.

In case of damage, replace the rubber seal

Rinse all pump parts in gasoline.

Inspect the pump housing. The threaded holes of the housing must not be damaged and the thread must not break.

There should be no warping in the area of threaded holes on the mounting flange of the pump head.

The control hole strainer must not be clogged or damaged.

Inspect the diaphragm. If there are cracks, tears or significant scuffs on it, it needs to be replaced.

Check if there is no jamming of the valves in the pump head. If there is jamming, eliminate the causes or replace the fuel pump head.

It is more convenient to assemble the pump in the following sequence: 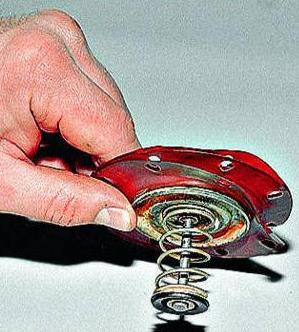 We install a thrust washer, spring, membranes and membrane washers on the rod.

Tighten the nut of their fastening.

We install the stem with the membranes into the pump housing and, having drowned the stem, insert the lever with the sleeve and spring.

The lever fork must engage with the rod (as shown in the photo).

Further assembly of the pump is carried out in reverse order. 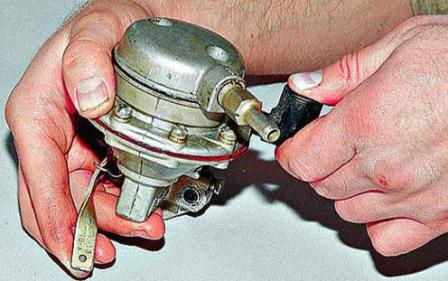 Pinching the outlet pipe with your finger, using the lever of the manual drive, we create pressure by lowering the pump inlet nozzle into the fuel.

After holding for 10-15 seconds, we release the finger. Fuel should splash out of the outlet pipe. Otherwise, tighten the screws connecting the housing and the pump cover, and re-check the serviceability of the pump.

If it was not possible to restore the pump's operability in this way, the valves are leaky. In this case, we change the pump assembly or half of the housing with valves.

We install the pump in the reverse order.

There is a drainage hole in the pump housing for draining fuel in case of damage to the membranes.

Therefore, after starting the engine and during its operation, it is necessary to monitor the absence of fuel leakage from this fuel pump opening.