When the crankshaft speed is between 1500-4300 rpm, the ECU supplies voltage to the solenoid valve.

After exceeding 4300 rpm, the power supply to the solenoid valve stops.

At the same time, the position of the phase regulator mechanism contributes to filling the cylinders at a high crankshaft speed.

In this position, the locking plunger blocks the mechanism.

The operation of the phase regulator and the solenoid valve is shown in Figure 1.

At speeds up to 1500 rpm, the solenoid valve is not energized.

The mechanism is blocked by a plunger.

From the moment power is applied to the solenoid valve at a crankshaft speed of more than 1500 rpm, under the influence of oil pressure, the locking plunger moves away and releases the mechanism.

In the initial position, the solenoid valve is closed.

The valve opens the oil passage to control the phase regulator under the following conditions:

- the crankshaft speed sensor is working;

- the injection system is working;

- after starting the engine;

- the engine is not idling;

When the solenoid valve is locked in the open position, the engine idling is unstable, the pressure in the intake pipe is increased.

The engine may even stall (there have been cases of engine failure).

We remove the valve for replacement, as well as for cleaning the valve or for replacing the seal in the cylinder block cover. 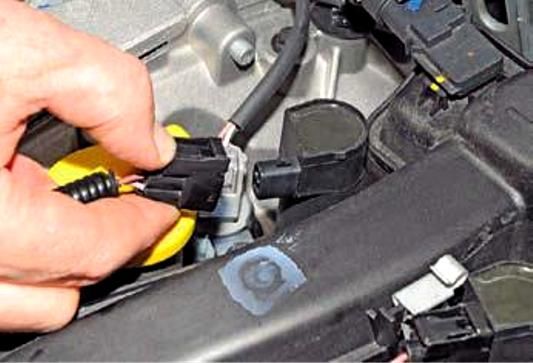 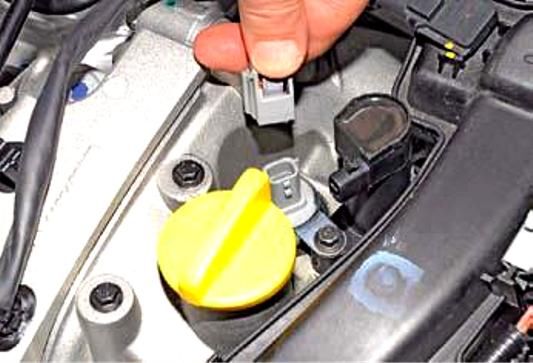 Press the lock of the wiring harness block, disconnect the wiring block from the coil connector of the 4th cylinder

Press the latch and disconnect the block from the valve connector 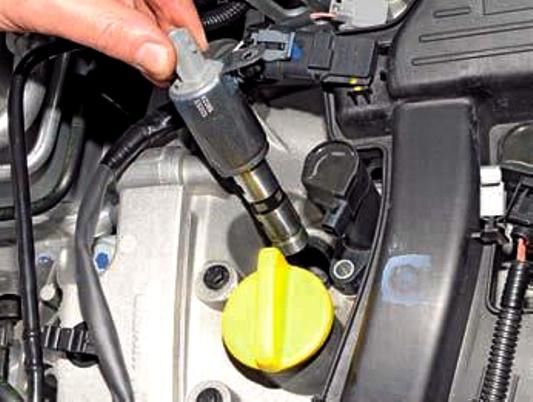 Remove the valve from the hole in the cylinder head cover

The connection between the valve body and the cylinder head cover is sealed with an oil seal pressed into the cover socket.

If the oil seal is damaged, we replace it.