The engine cylinder block is cast from cast iron

The casting is subjected to artificial aging to relieve thermal stresses, which allows the unit to maintain the correct geometric shapes and dimensions during operation

Two rows of semi-blocks for cylinder liners, cast as one with the upper part of the crankcase, are located at an angle of 90 ° one to the other.

The left row of bores for the sleeves is shifted relative to the right one forward (to the fan) by 29.5 mm, which is due to the installation of two connecting rods on each connecting rod neck of the crankshaft.

Each bore has two coaxial cylindrical holes made in the upper and lower belt of the block, along which the cylinder liners are centered, and recesses in the upper belt forming annular pads for the sleeve collars.

To ensure the correct fit of the sleeve in the block, the parameters of flatness and perpendicularity of the thrust pad under the sleeve collar relative to the axis of the centering bores are performed with high accuracy.

On the lower belt there are two grooves for sealing rings, which prevent the coolant from entering the cooling cavity of the unit into the cavity of the engine oil sump.

The bosses of the holes for the cylinder head mounting bolts are made in the form of tides to the transverse walls forming the cooling jacket, evenly distributed around each cylinder.

The crankcase part of the block is connected to the covers of the main bearings by the main and tie bolts. 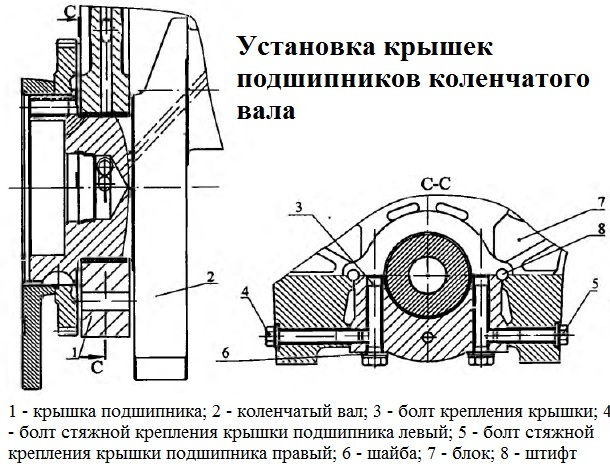 Centering of the caps of the main bearings is carried out by horizontal pins 8 (Figure 1), which are pressed at the junction between the block and the covers, but mostly included in the block to prevent them from falling out when removing the covers.

In addition, the cover of the fifth root support is centered longitudinally by two vertical pins that ensure the accuracy of matching the bores under the thrust half-rings of the crankshaft on the block and on the covers.

On each cover there is a serial number of the support, the numbering of which begins from the front end of the block.

In the crankcase part of the camber of the cylinder block, the guides of the valve tappets are made in the form of bosses.

Closer to the rear end between the fourth and eighth cylinders, to improve the circulation of the coolant, a bypass pipe of the cooling cavity is made.

At the same time, it also gives the block additional rigidity. Parallel to the axis of the borings for the crankshaft bearings, borings are made for the camshaft bushings of increased dimension.

The diameters of the oil channels in the cylinder block are increased.

In the lower part of the cylinders, bosses for piston cooling nozzles are cast, along with the block.

In order to install a filter unit with a heat exchanger on the right side, the filter area has been increased compared to the 740.10 engine, two additional mounting holes and a drain hole from the filter have been introduced. 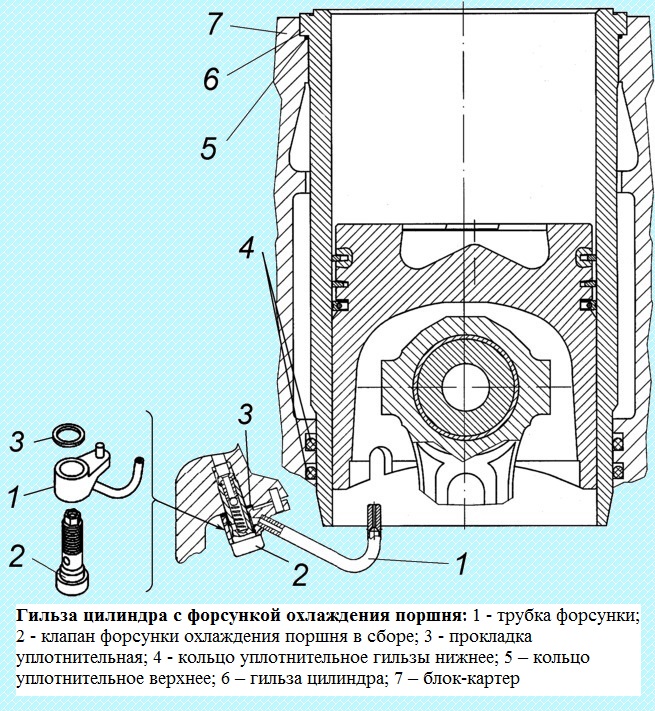 Cylinder liners (Figure 2) of the "wet" type, easily removable, are marked 740.50-1002021 on the conical part at the bottom of the sleeve. The installation of sleeves with a different marking is unacceptable due to the resulting contact with the connecting rod.

The cylinder liner is made of gray special cast iron hardened by volumetric hardening.

The microrelief on the sleeve mirror is a rare grid of depressions and areas with small risks at an angle to the sleeve axis.

When the engine is running, the oil is retained in the depressions, which improves the workability of the cylinder-piston group parts.

When assembling the engine, the cylinder number and the index of the piston version are applied to the non-working protrusion of the sleeve end. 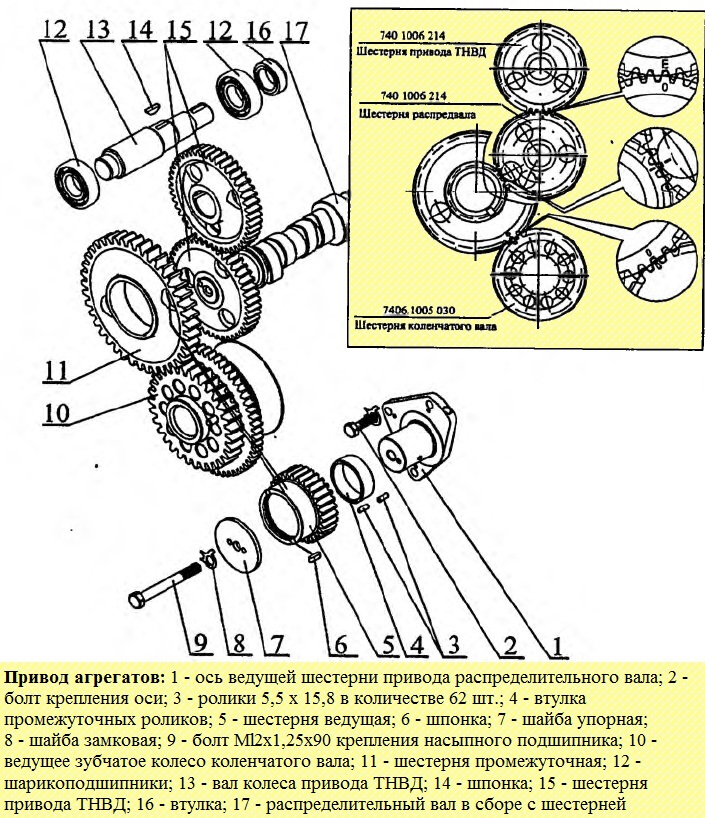 The drive of the units (Figure 3) is carried out by straight-tooth gears and serves to drive the gas distribution mechanism, the high-pressure fuel pump, the compressor and the power steering pump of the car.

The timing mechanism is driven from a gear 10 mounted on the crankshaft shank through a block of intermediate gears that rotate on two rows of rollers 3 separated by an intermediate sleeve 4 and located on an axis 1 fixed to the rear end of the cylinder block.

A gear is pressed onto the end of the camshaft, the angular position of which relative to the shaft cams is determined by a key.

Gear 15 of the drive of the high-pressure fuel pump (injection pump) it is mounted on the shaft 13 of the fuel pump drive and is fixed with a key 14.

Gears are installed on the engine in a strictly defined position according to the label "0" on the camshaft drive gear, the label "E" on the fuel pump drive gear and the risks stamped on the gears, as shown in Figure 3.

The drive of the fuel pump is carried out from the gear 15, which is engaged with the gear of the camshaft.

With the drive gear of the fuel pump, the gears of the compressor drive and the power steering pump are engaged.

Bosses with holes for draining oil from turbochargers and a hole for the oil level indicator are made on the sides of the crankcase of the units.

On the flywheel crankcase on the right there is a place for installing the flywheel lock used for installation, the fuel injection advance angle and the regulation of thermal gaps in the gas distribution mechanism.

The lock handle must be in the upper position when the engine is running.

It is moved to the lower position during adjustment work, in this case the lock is engaged with the flywheel.

A boring is made in the upper part of the flywheel crankcase, into which the rear bearing housing is installed.

In the upper part of the crankcase on the left there is a tide designed to install a power take-off box (COM). If there are no lumps, the inner surfaces of the tide are not processed.

The rear flange of the flywheel crankcase is made with connecting dimensions according to SAE1.