The operation of the phase regulator of the K4M engine

To improve the filling of the cylinders with the fuel mixture in all modes, 1.6l engines are equipped with a phase regulator for the intake camshaft.

The offset timing of the closing of the intake valves optimizes the filling of the cylinders with the fuel mixture, depending on the engine speed.

The result is increased torque at medium loads and power at high engine speeds. 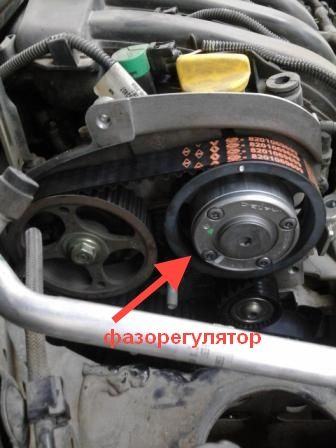 At high crankshaft speed, the late closing of the intake valves provides an additional portion of the fuel mixture due to the high speed of the mixture.

On the contrary, at a low rotation frequency, the inertia of the mixture is small.

Therefore, it is desirable to close the exhaust valves earlier in order to avoid insufficient filling of the cylinders and the loss of torque due to the displacement of part of the fresh mixture.

The higher the crankshaft speed, the later the intake valves must close. 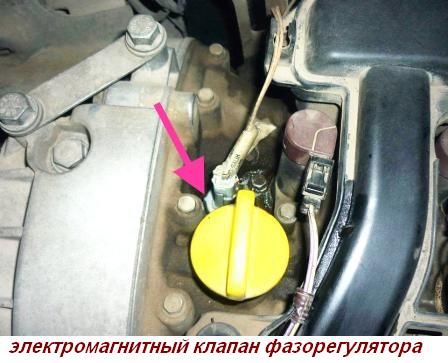 The amount of oil supplied to the phase regulator is determined by a solenoid valve mounted on the cylinder head (see Fig. 2).

The valve is supplied with power in the form of an alternating signal of the degree of cyclic opening (with an amplitude of 12 V and a frequency of 250 Hz).

This allows you to supply oil to the phase regulator mechanism and thus change the phase angle. 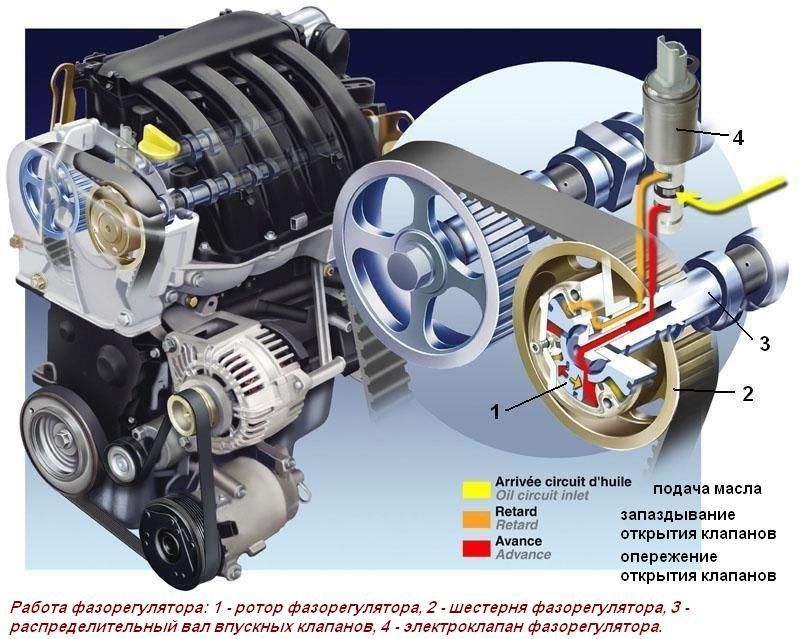 The ECU sends to the solenoid valve an alternating signal for the degree of cyclic opening, the value of which is proportional to the required phase displacement.

The phases are constantly changing from 0˚ to 43˚ in the angle of rotation of the crankshaft.

At a crankshaft rotation speed within 1500–4300 min – 1, the ECU supplies voltage to the solenoid valve.

When 4300 min – 1 is exceeded, the power supply to the solenoid valve is interrupted. In this case, the position of the phase regulator mechanism contributes to the filling of the cylinders at a high crankshaft speed. In this position, the check plunger locks the mechanism.

At a speed of up to 1500 min – 1, the supply voltage is not applied to the solenoid valve.

The mechanism is blocked by a plunger. From the moment the solenoid valve is energized at a crankshaft rotation speed of more than 1500 min – 1, the shut-off plunger moves away under the influence of oil pressure and releases the mechanism.

The camshaft phase regulator solenoid valve is controlled under the following conditions:

- the camshaft position sensors are in good order;

- the injection system is working properly;

- after starting the engine;

- The engine does not idle with the accelerator pedal depressed;

- the threshold value of the injection profile is obtained, which is set taking into account the load and the crankshaft speed;

- return of the phase regulator to its original position;

Note. When the solenoid valve is blocked in the open position, the engine idling is not stable, the pressure in the intake pipe is increased. At the same time, a more noisy engine operation is noted.

The main malfunctions of the solenoid valve of the phase regulator:

- offset or mismatch of the programmed values;

- the amount of regulation is outside the permissible limits.